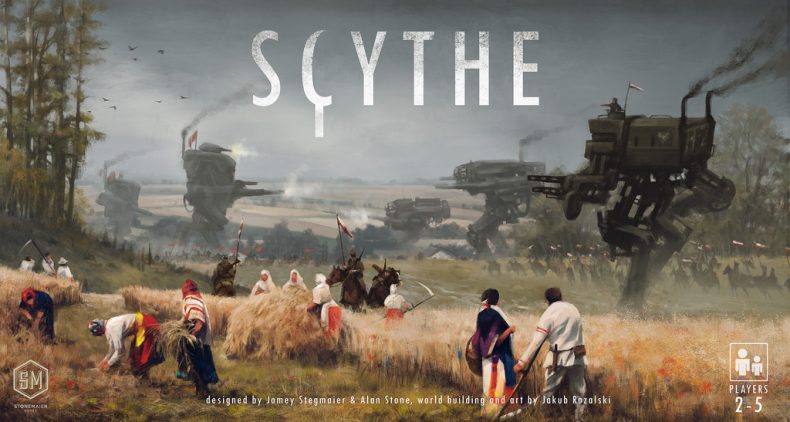 There's nothing new here, its a beautifully constructed collection of the best bits from other games.

Scythe builds its stunningly produced edifice on the foundations of some of best games on the market, but ultimately feels like a mix tape of mechanics wrapped up in the most extravagant bow. Its solidly entertaining game, with plenty to get youre teeth into but I found it ultimately falls short of expectations. Its the summer blockbuster as a board game.

Scythe was massively hyped even before hitting Kickstarter and unsurprisingly proceeded to smash through its initial funding goal in a matter of hours, going on to be really rather popular. Little has subsequently diminished the frenzy of hyperbole leading up to its release. It’s the cardboard equivalent of a summer blockbuster.

Scythe represents Jamey Stegmaier’s second difficult album, technically his third but I hope you get my point. Coming as it does off the back of the highly praised Euphoria and the beloved Viticulture reprint, fans had lathered themselves up to a frothing fit of expectation. Not least due to the fabulous artwork supplied by Polish artist Jakub Rozalski that was integral in the development of the game alongside all the bells and whistles now expected of a Stonemaier product. 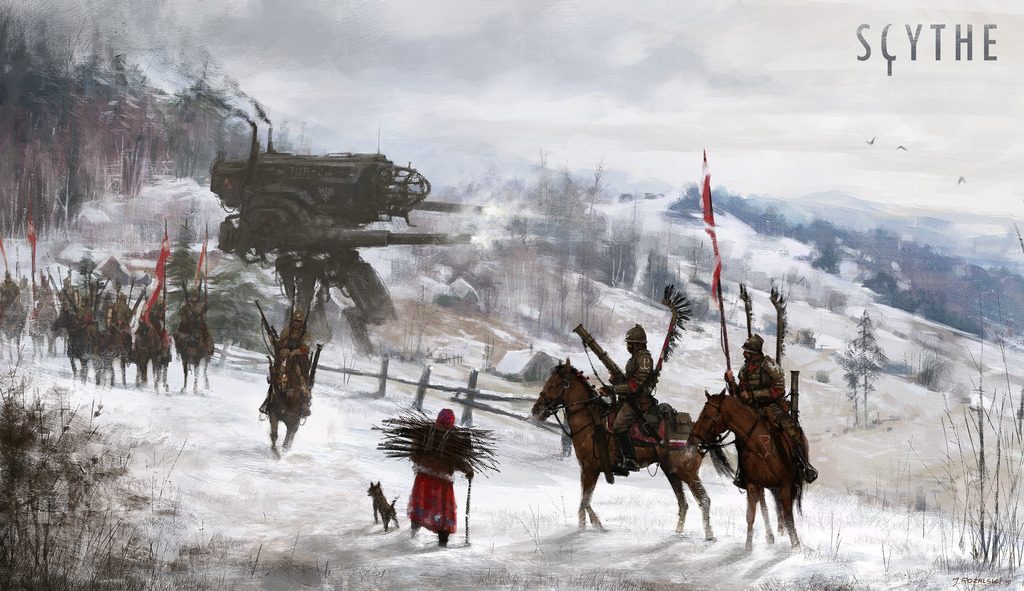 And putting aside any other opinions one thing that cannot be taken for granted is just how fantastically handsome this game is, from Jakub’s stunning art to the extravagant components the collector’s edition of this game cements Stonemaier as THE premium board game publisher on the market. 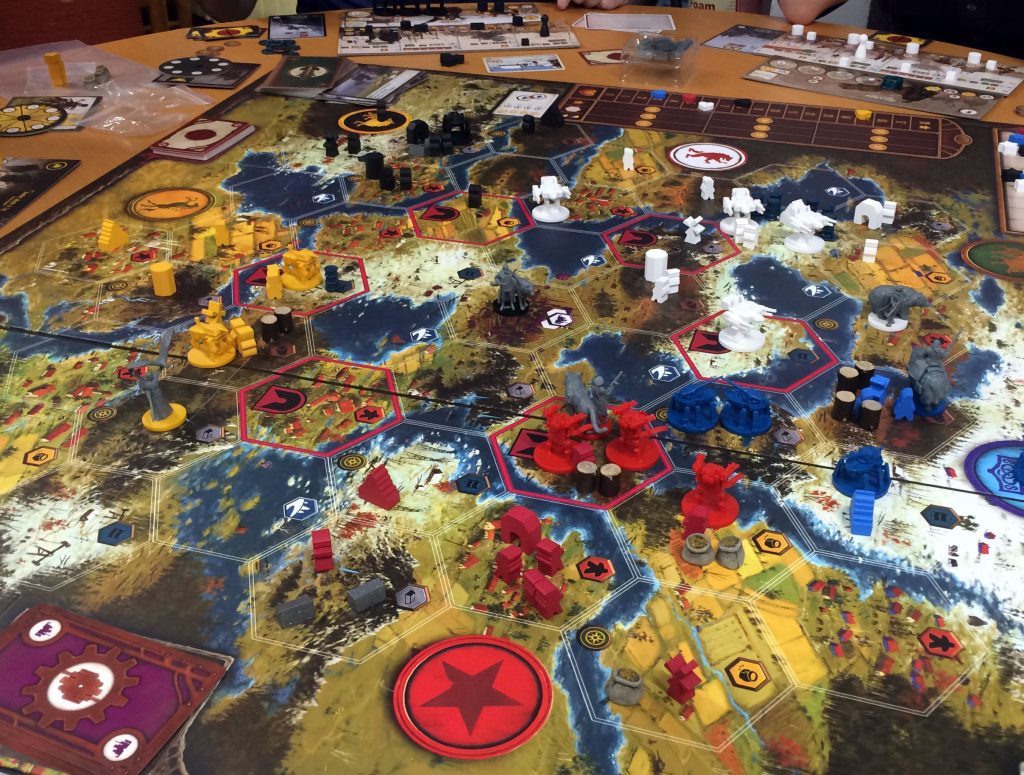 But is the actual game any good? While I’ll agree it’s a robust and thought-provoking experience and a highly entertaining thing to play I have to admit to finding it falls short of the lofty expectations heaped upon it.

The game is actually very straight forward, players each control a faction represented on the map by workers, and the towering mech’s a sort of steampunk equivalent of Pacific Rims kaiju thumping robots. Each faction comes with two randomly chosen and distinct player boards one representing a technology tree and the other offering perks unique to those peoples.
The meat of the game sees each player racing to develop their tech tree into building the most efficient engine to make the best of where on the board they find themselves. Each round a player takes an action to activate one section on the board and carries out those orders and pays whatever resources that are required, a more costly second option is also available on each that will allow them to manipulate their board in some way and progress the development of their faction. 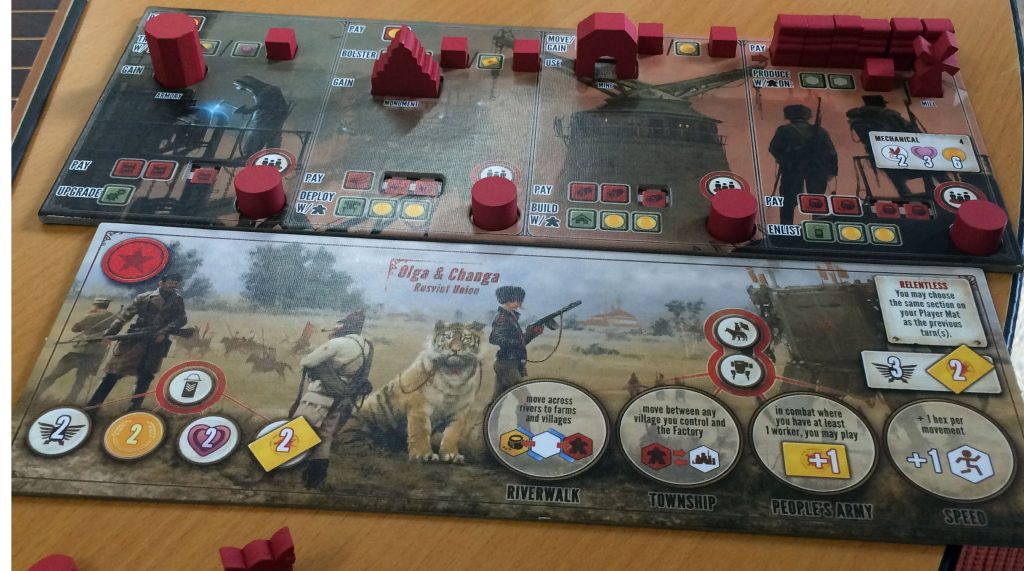 Think of this a little bit like Civilisations tech tree but represented by the player board from Terra Mystica that as you upgrade sections or build structures you uncover better perks or abilities that then go on to give your Mech’s or faction more perks.

It’s this activity that is the beating heart of the game as the decisions you make here affect how effective your forces are on the board the resources you can harvest and the points you’ll ultimately score. Don’t get me wrong its enthralling fun as you focus on this business, but it is essentially a table of people playing their own little solo games of tech tree Sudoku.

Lauded as part Euro and war game this is where Scythe fumbles the ball. While the Euro is there for all to see with the resource gathering and engine building the combat system feels like a cobbled on afterthought. Battles are a deterministic affair with either side secretly choosing the amount of power they will be spending on the fight up to a maximum of 7 and adding combat cards to boost this total. 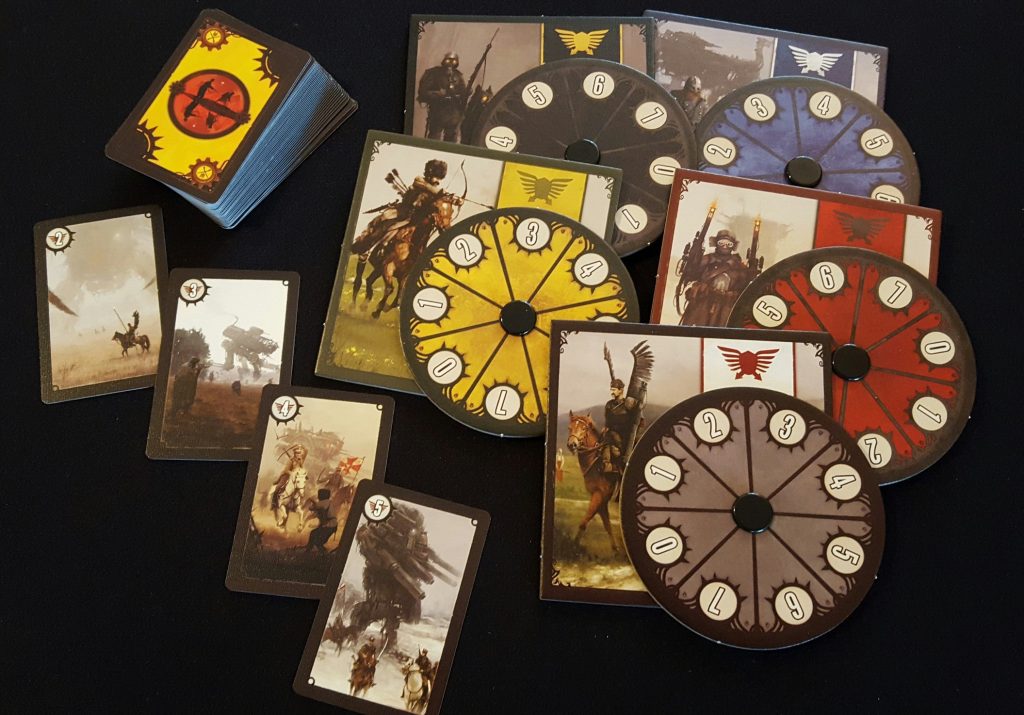 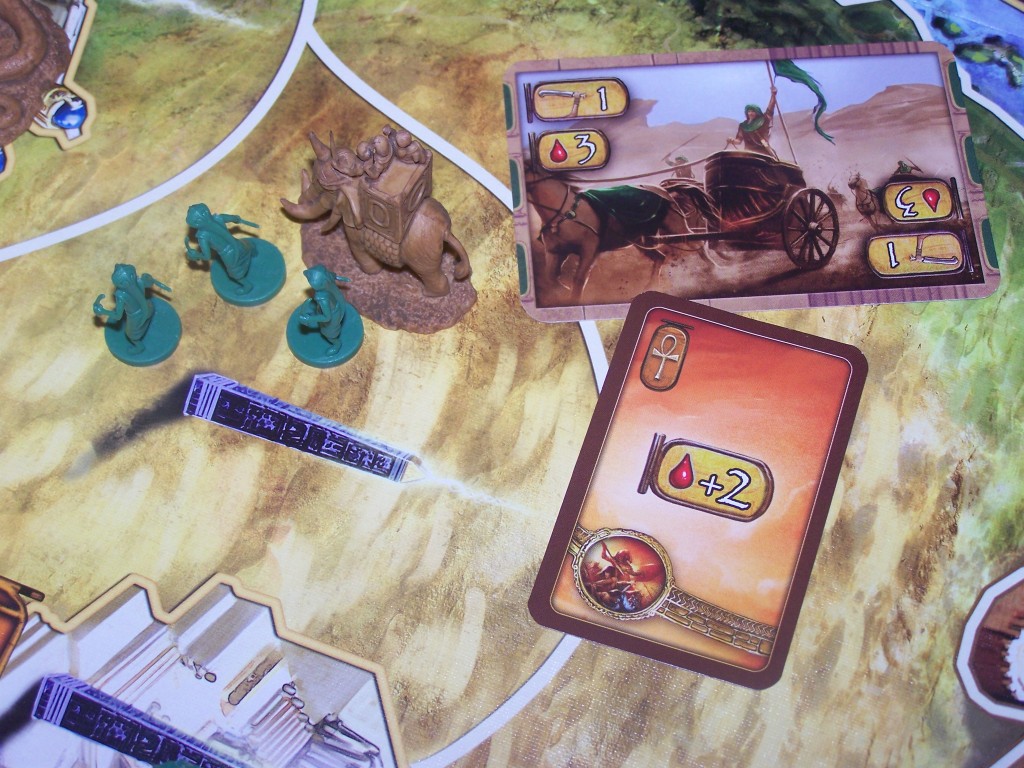 Borrowing a little from Rex and Kemet yet nowhere as exciting as either, the problem is the combat cards, most of them being either a 2 or a 3 with a few scant 4’s and 5’s scattered amongst them. Kemet’s battle system with duplicated hands of cards for each faction lead to enthralling skirmishes of bluff and double bluff with neither side quite sure of what their opponent was going to choose, but with the knowledge of what had been played previously. It simulated the fog of war effortlessly and allowed for some real tactics and ploys. Whereas Scythes battles hold no surprises the player with the most power is invariably going to win. And worse the game is handicapped against the aggressor, for every worker you dislodge in your warmongering you lose Popularity, and Popularity, as we’re about to discover, is I believe central to winning the game.
Ultimately war is not so much hell as just really rather disappointing, a well-planned raid on an opponent in one of their production centers can certainly derail their game engine but ultimately it’s a thrill-less experience.

And as I brought it up let’s discuss Popularity, at the edge of the board is a track charting each factions Popularity rating, this is split into three tiers with the higher you are, the bigger the multipliers for your end game score. It’s my opinion despite all the multitude of choices and options on offer, it is this one score that can make the difference between victory or defeat. 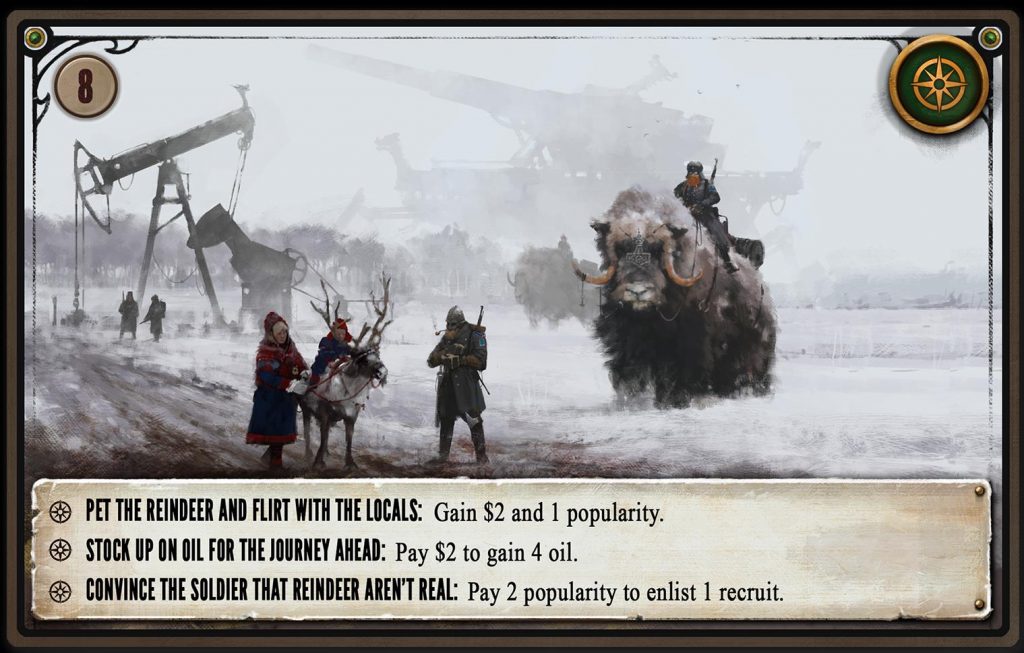 There are other adornments available to you, in the center of the board is the Factory some long abandoned facility that when reached for the first time gives you a choice of a permanent additional board action that you add to your tableau. This will be a shortcut to one of your techs that if you can pick one that compliments your engine early enough can be a great boon.
Also scattered across the board are encounter tokens when visited the player draws an encounter card. These offer a choice of three options two are mild perks and then a naughty one that will require losing something you need to gain a juicy reward, they are nearly always useful, and almost always you’ll choose the 3rd most powerful option, because really why wouldn’t you. Again more of Jacobs art is lovingly daubed across the cards along with the choices, and despite how lovely the art is, and it is, part of me feels either a title or dash of flavor text would have been helpful to set the scene a little more.

Finally after all of that when a faction hits 6 stars the game is over. Immediately.

And if you found that a little jarring then well it is. After all this world building and tech tree manipulation there’s this arbitrary end, finished kaput and it can be sudden with little warning. A game of Scyth will go as such, everyone spends an hour maybe two harvesting, moving and tech sudokuing picking up the odd one or two stars, and then in the space of a round maybe two suddenly everyone can hit the total. Its then this mad dash of trying to suddenly grab territories or resources throwing any gestating plans on the fire in this mad grab for stuff. It’s just so sudden and unsatisfying after the journey we’ve taken, Imagine if Lord of the Rings Return of the King decided to skip that whole Gondor siege thing and volcano and ring business and just jumped to the bloody Hobbits high fiving at Rivendale. The End.

Now this sounds like I’m ragging on Scythe, and I don’t mean to. It is an enormous amount of fun, when you’re engrossed in the business of tweaking your engine and messing with your tech tree, it’s all very enjoyable, but here’s the rub.
There really isn’t anything all that innovative, it feels like I’m playing this potpourri of popular mechanics. The player boards are excellent fun, but I think TM did it better, the combat again borrowed from Kemet is nowhere near as much fun as that game. There’s a dash of Eclipse a pinch of Viticulture a niblet of Euphoria. Everything is immaculately balanced, but you know what? I love a little chaos in my world, a bit of random, there is nothing here to chance, and inevitably the whole thing ends up despite the incredible art and extravagant components feeling great when I really want to be jumping on my chair, and bellowing like Brian Blessed “It’s incredible!”.
I think I get it now Jamey is the Ridley Scott of board games, both of them it cannot be denied are masters of their form. They create these epic stylishly produced masterpieces beautiful to admire but ultimately lacking in something.

I’m so torn because I have enjoyed every game of Scythe I’ve played, it’s a robust design it’s hugely enjoyable, there’s nothing wrong with it at all but it ultimately falls short of the sum of its very impressive parts.