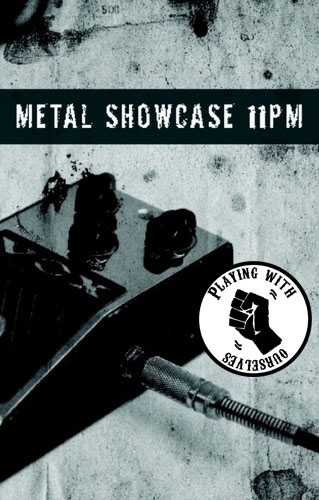 You’re a performer with more ambition than talent; maybe you’ve got some sweet moves, maybe your style is pretty rad or maybe you’re moneyed enough to have the right gear. Whatever you’re not so good at, maybe you’ll find the right bandmates, make the right decisions and stomp the other bands into the ground at the metal showcase!

I wasn’t really much of a Choose Your Own Adventure book person. There were the old school-level series, which I read a few of, but I never encountered Lone Wolf or Warlock of Firetop Mountain or any of those other books. I firmly remember being taken to Shoreham Airport by my mum and while my brother was watching the planes, I was transfixed by an Asterix book which had dice with it. I wanted to know how you ‘play’ a book. That knowledge would come much later when my dad bought me Vampire: The Masquerade for Christmas without either of us knowing what it was.

I wasn’t aware that Jason Morningstar, the creator of Fiasco, had made what’s pretty much one of these old school Choose Your Own Adventure books. To play, you need the book, a couple of six-sided dice, cards with the bands on, a pen and some paper.

My first band were Submachine Fun and I was the bassist, eager to win but without the means to do so. The character I played was unnamed, was basically me but with musical skills outside of the Rock Band games. I launched into things, offended some of the people I was looking to hire and really only in it to get money to fix my car. I attempted to sabotage a rival band, then crashed and burned in the battle of the bands. Your character has Gear, Chops and Style stats which can change in play, as do the band. When you’re in the battle you roll dice, add the stat and hope for the best. My luck was abysmal for the three challenges against a Star Wars themed  metal band. The utter indignity of it all. 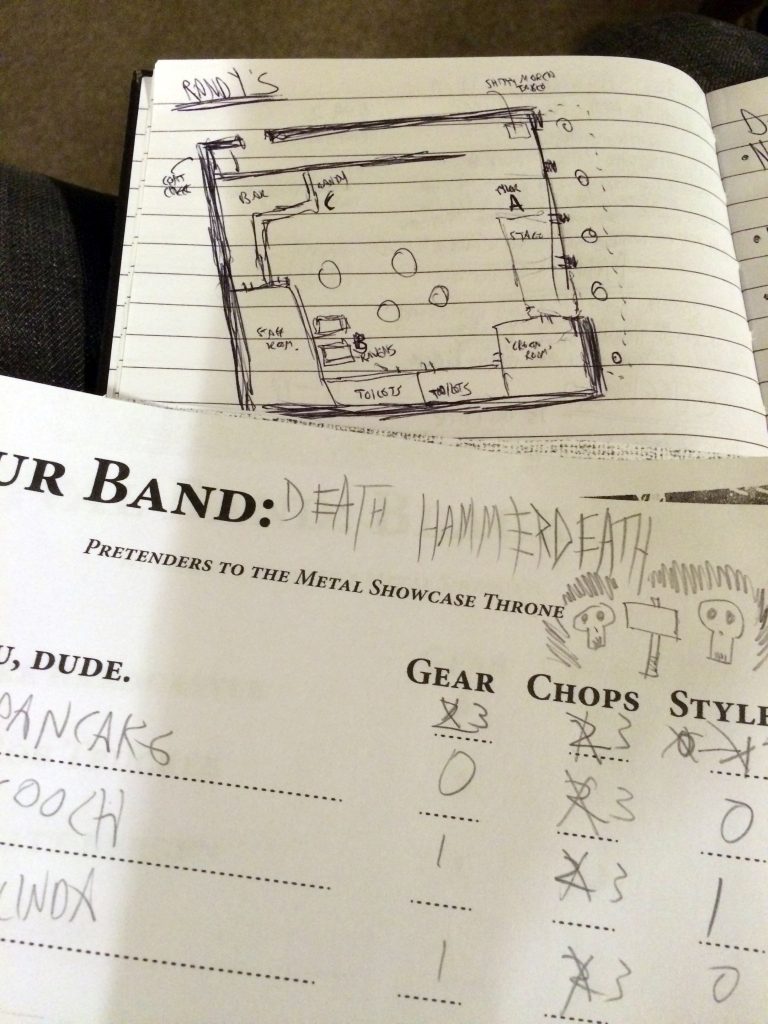 A few weeks passed and I had another go.

I needed a band, I needed $1,000. There was an all-ages metal contest to take part in. My character was more in this for getting back into playing with a band, although a grand would be a good start at moving out from his parents’ place. Even sharing that with the rest of a band, it could cover a deposit.

My character had the stats:

He had some equipment from several half-formed bands which were ditched once he lost interest. He could play, but completely lacked style.

Challenge one was getting a drummer. I had a sloppy bastard called Pancake before so I went for the other drummer NPC to add to my band. He went with another group called Gantua. I lied about the quality of my gear, but he wasn’t having any of it. Instead we ended up with Pancake again.

Then for a guitarist I went with Chris Cuccinello who didn’t want to be called “Cooch” so I wrote his name down in my notes as Cooch because fuck him. We were in a band together before and in return for some weed, he joined the band. I was pretty pumped as we rocked back in the day.

Finally we needed a vocalist. Melinda Resnick was another person who I’d played with in a power pop band. I dropped them to follow the metal dreams I had. I apologised for ditching that band and promised to return to them if only she helped with this performance. A lie, but again, not the worst. Melinda accepted on that condition and joined the band.

Out of all the bandmates, Pancake was the unknown factor, the weak link. We gave him some speed in the hope that it would help his performance, accepting that there was a chance it could screw him up later in life. No one wants to live forever, right.

The band was sorted. We were the dark and mysterious DEATH HAMMERDEATH! 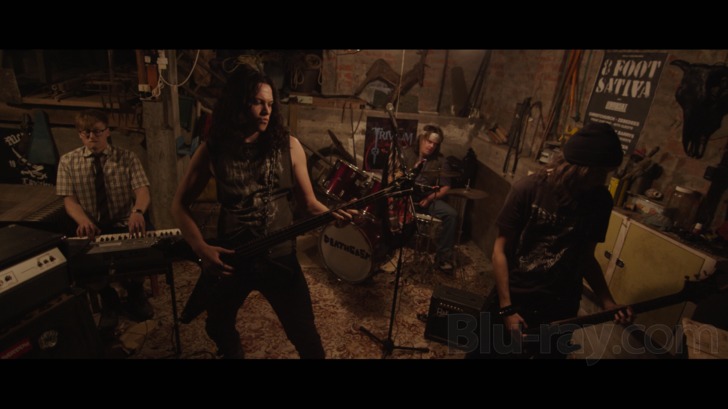 Forming the group was the start, then I had to map out Randy’s. There were a couple of locations I had to mark with letters and a few contents which had to be in the location. Here’s my map. I imagined it being on a beachfront somewhere, with the pillars over to the right facing out to sea. 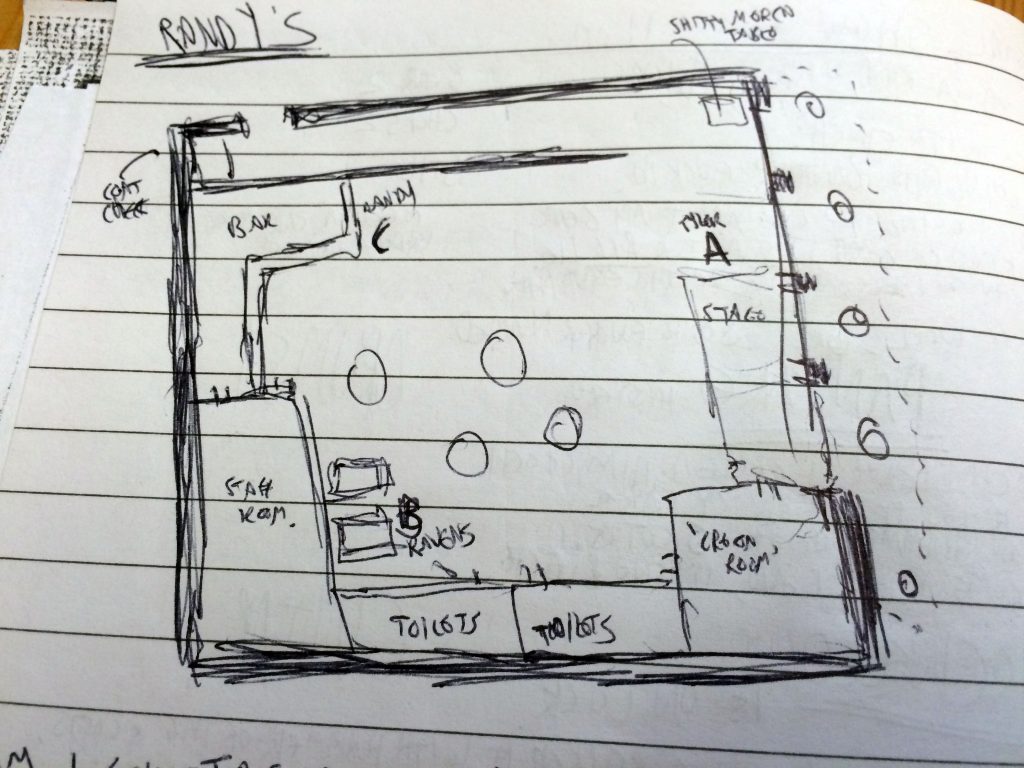 It was packed. The book asked whether I wanted to sabotage a band; there are several points like this where there are moral choices which probably won’t have repercussions in the text but may well do in the future. Can you live with yourself? I could. I lost to Force Choke last time so I decided to screw with their gear. Fuck Force Choke and fuck Episode One. 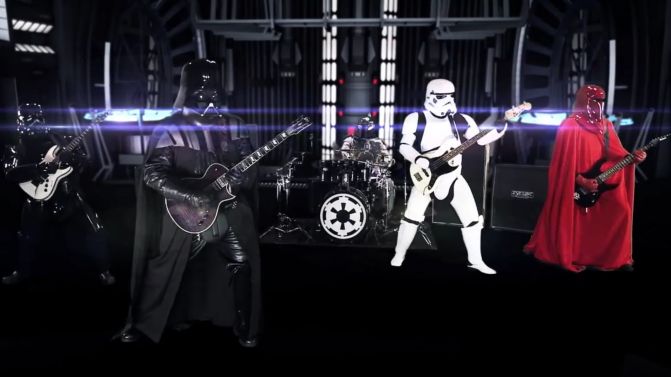 Each battle of the bands was a dice off between the player band and the NPC one, going for the best of three. As each one uses different sets of stats, I’m not going to say what most of the contests were.

Dressed as goth Norse gods, Death Hammerdeath managed to outshine Force Choke, duelling them in instruments and wits. With a bit of luck and that handy piece of sabotage, we called for them to get the Sith off the stage.

As they left, I saw my kid brother was watching, rapt at the music. I generally did my best to ignore the kid, but he looked up to me anyway. I realised I actually wanted to win this in front of him, to not let down his ideal of who I was. Knowing the next band were pretty technically awesome, I brought out my grandad’s old effects pedal (hopefully not haunted). 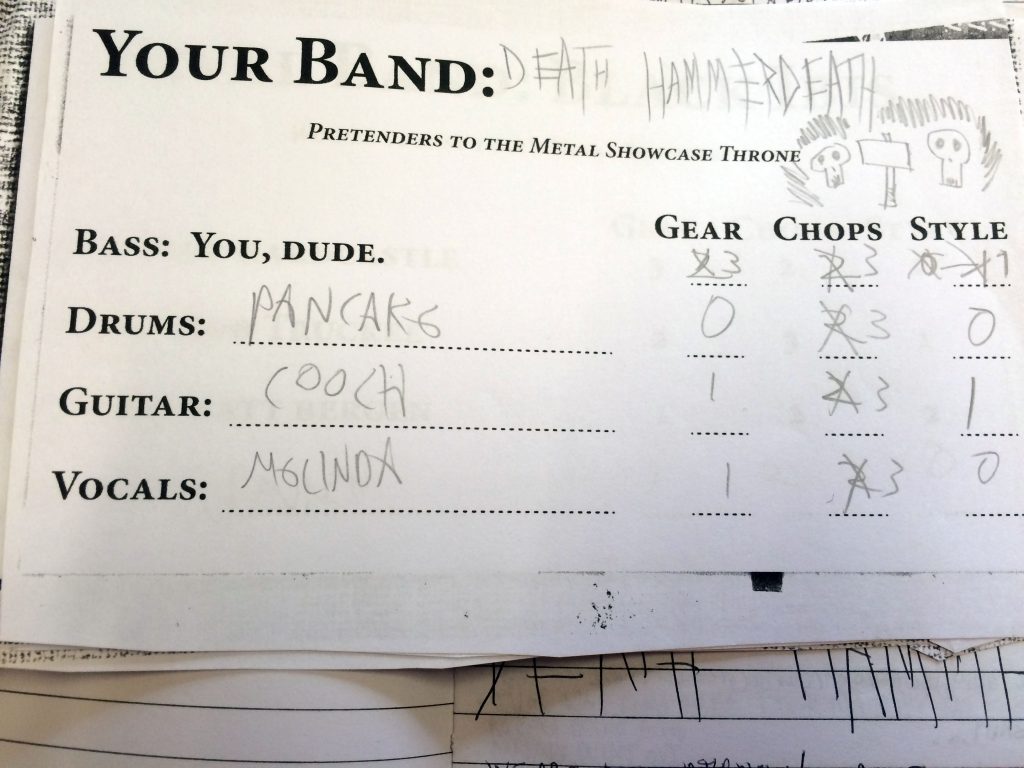 This was serendipity, after Finch abandoned me because of my tech. As we went up on stage I had to wonder if I was okay with what I’d done: drugging Pancake, selling weed to Cooch, my half-hearted apology to Melinda, sabotaging Force Choke and probably much more? Yes. Yes I was. Rock makes demands of us all.

We smashed through the contests with Gantua, beating them into the ground and prepared for the last battle.

They won this contest last year and they beat my band into the ground. That was probably why we broke up but really I’ve had so many bands that it’s hard to tell.

Maybe it’s the drugs in my system, maybe it’s the purity of the metal going through me, but the club seems to change. It’s like the gods of metal approve as I see an omen on the pinball machine. They’re gone and suddenly I’m back, I’m rocking out.

We start well, but by the midway some of my band are starting to flag. I’m worried as it’s all to play form It could go hideously wrong, we’ve flown too close to the sun. Despite getting a ton of stat bumps (as you’ll have seen on my band’s character sheet as that’s our final set of stats rather than how we were at the beginning) it was down to one roll.

The big final rock out ended up with them having a modifier of 20 and rolling 2 on their d6. We had 19 and rolled a 4. The dark gods of metal were in our favour!

Randy forked over the money and went to a bar and possibly a Wendy’s with the rest of the band and Tyler, before going home.

Pancake burnt out, as we probably should have expected from early on. Cooch admitted he played with us even though he knew our gear was pretty shoddy. I let Melinda down with my promise to return, but the sound she developed after crossing over briefly to metal only helped with her band. Death Hammerdeath’s reign was short and brilliant, but lasted maybe a month or two before people left. I started at least one more band and probably burnt some more bridges there. 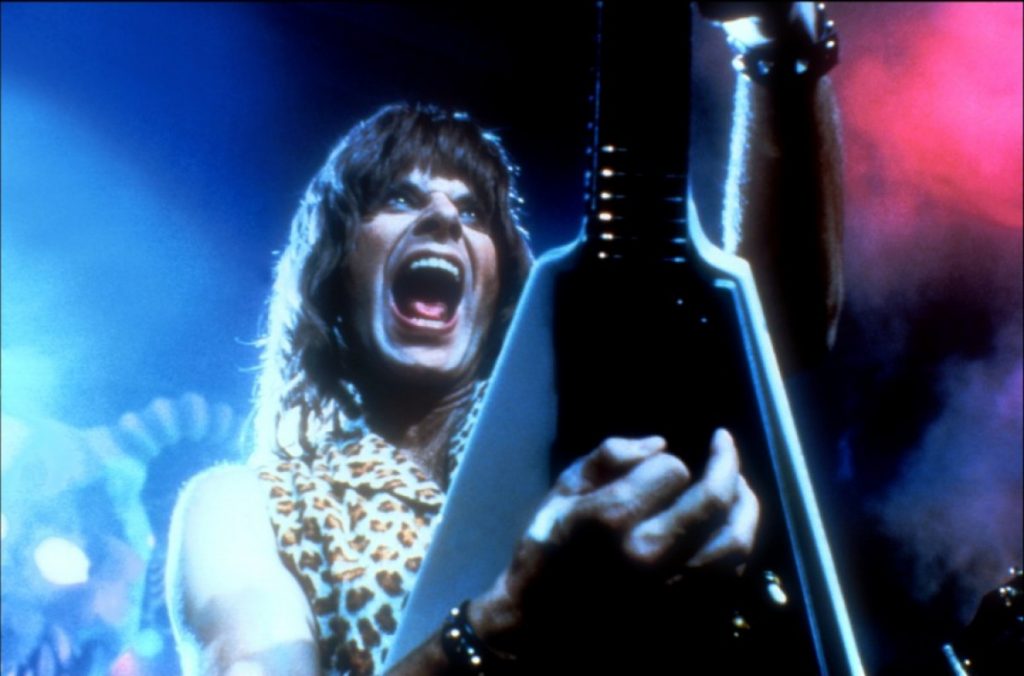 Metal Showcase 11pm is short, but it’s a great experience. While it’s mostly in the style of a ‘choose your own adventure’ book, the elements like mapping Randy’s and the ability to morally compromise yourself for bonuses or to automatically pass a challenge. What are you willing to do to appease the gods of metal and earn your band a grand?

Metal Showcase 11pm is available on Lulu. While 90% of my RPG purchases are in pdf, which is how I purchased my copy, I think it might be better in its’ physical form just because searching the pdf for the right paragraph without spoiling things was tricky.

Oh, The Places You’ll Go
Be the first to comment!
Leave a reply »