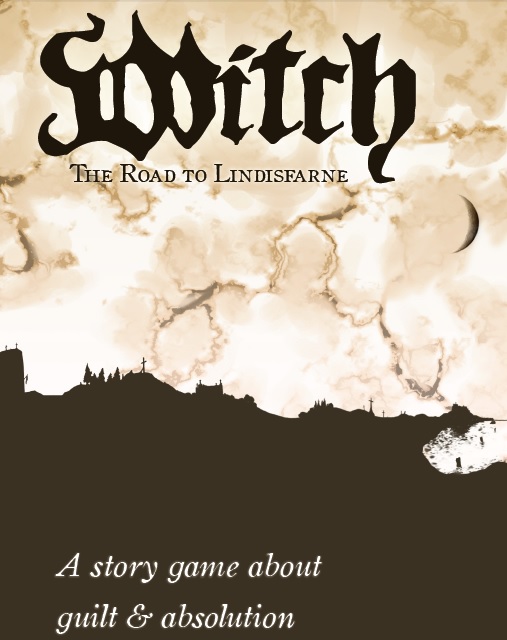 Details
RPGWitch: The Road to Lindisfarne

It’s said in writing that if you want to make things dramatic then you should have your character or characters conflicting against two of three things: the world, another character or themselves. Role-playing games often focus on the first two. You’re a bunch of adventurers taking down some bastard orcs who have set up in the Caves of Chaos and started raiding nearby trade routes. You’re a samurai on their way to duel with the character who kidnapped your loved one. You know, the usual.

Witch: The Road to Lindisfarne appears to be about most of the players working against one player, a witch who has confessed to her sins and is to be burnt to death on the Holy Isle of Lindisfarne. The thing is, the conflict is over when you begin. You’re celebrated heroes, you’re taking this woman who has apparently spread plague off to her death. Only it’s not as easy as that, is it? A witch could easily have been a woman who attempted to have some agency, who spoke back to the wrong person. A hero could be a brave knight or a thief and a coward. No one is innocent in Witch, not really. The real conflict, the real drama found here, it’s all fiercely internal. Each character is in a battle against themselves; their own self-doubts and their doubts about whether their quarry is really a witch. Then there’s Elouise, the witch. She decides before we begin the game whether she’s guilty or not. She picks the corresponding piece of paper and folds in shut in the middle of the table. No back-tracking now, no changing your mind. Then she hears about her captors and their celebrated journey out of London.

In this game, Vinnie played Elouise, stuck in a cell for the majority of the game, let out only at the end or in flashback. The rules themselves state that she will make it to Lindisfarne. This isn’t about her escape, this isn’t about a chase. She’s been caught and she will not get free unless one of her captors decides it at the very end. Vinnie was handed half a piece of A4 paper, cut vertically and explaining the rules from the perspective of the witch.

Elouise’s captors each had their own half page character sheet with an illustration of the character, some traits, some questions to ask yourself about the character and answer in play, then some scene prompts if you’re not sure what to do.

Ash played Brother Armond, a man of the cloth who doubted whether Elouise was a witch and had some dark secrets of his own.

I played ‘Sir’ Thorne, a wounded and bitter deserter from the Crusades.

Steve played Sir Hayden, a judgemental knight who was untested despite his age.

Lee played Ham, a guide who didn’t share our beliefs but would accept our coin.

We only had fix players, so we left out the squire Berrick.

Play in Witch is split into different acts, each read by a different player and guiding us to do different things. This game didn’t require dice rolls, simply a scene framed by one player and then added to by the others where necessary. At the start, each player reads their questions out so that we know to play off of them in their scenes. The use of magic in the game is ambiguous and doesn’t need to be clarified in play. We kept things so that there may have been magic, or it might have been the imaginings of our characters. The written text in the scenes explains the set up for the scenes and the tone. Our first scene in London was supposed to be “Hopeful”, however we all went a little ominous with it. All barring Elouise who didn’t get a scene.

Sir Hayden and Sir Thorne instantly didn’t get on, the old and untested man of honour against the jaded drunk and coward.

As the journey travels further through civilisation, it gets wilder and more perilous. We sought shelter in a church, but they knew and despised Brother Armond. Attempts to make peace fell apart swiftly and we had to seek shelter away from the comforts of a village. There was a moment where Ham and the others thought they saw phantoms in the Hangman’s Wood and Elouise had to be convinced to help with an antidote to the intoxication which was making him see ghosts.

Later on the Cliff Top Pass, some of Elouise’s friends tried to rescue her during a storm. Sir Thorne dodged a blow and fell down a hill down, down through woods and into what looked like an abandoned village. Suddenly he was back in the Middle East, bathed in the blood of friend and enemy alike. His men had refused to sack a village filled with women and children, so he had cut one down. The ghosts of the dead haunted him, mocked him. He was terrified and delirious. When he was found by the others, he was in a small village, long abandoned and completely empty. It was also revealed that he had a relationship with Elouise, but his demons had already claimed him by this point. They reminisced together briefly, both trapped in their own cages. Thorne was too old and broken to help, to go against his code after betraying it so much when he was in the Crusades. Ham revealed that his sister was Elouise, he’d regretted having to cut down some of their friends and was uncertain about who she was anymore. The way things looked, I was certain Lee as Ham would free her. Sir Hayden was resolute and Brother Armond had grown more so in our travels.

Finally we reached the Holy Isle of Lindisfarne, bright but claimed by creeping plants with large thorns. It was abandoned, but we cleaned it up, prepared the pyre and then game the final moment, where the decision is made.

As a brief aside, just to clarify, if the witch is guilty and we burn her, then we have happy endings narrated by ourselves. If we free the witch and she’s innocent, the same applies. If we make the wrong choice and either burn an innocent or free a guilty witch then we have bad endings. So those are the stakes.

The book itself is small, so it was easy to print out and staple into a booklet. We passed it around, deciding whether to read our section of the text out or break from the narrative and free Elouise. All it would take would be one person. I was certain Lee as Ham would do it. I was certain.

Each section brings the witch closer and closer to death.

Then I read as Thorne. We were never to be together, Thorne was too far gone. He was broken and irredeemable, so of course he read.

Then Steve read as Hayden, then finally the book was passed to Lee. He read the final section of our judgement of Elouise, though it meant her death.

Finally Vinnie as Elouise had to read and was not allowed to stop. Elouise was burnt on the pyre. Vinnie opened the envelope. Elouise was innocent. She was a doctor, she was attempting to help people, but branded a witch for her efforts. She passed and the companions had doomed themselves. Thorne’s future was short and bitter. The occasion and the guilt from it was piled upon what he had suffered already, leading to him drinking himself into his grave.

I talk about Witch from the perspective only of the companions, as so far that’s all I’ve had. The fierce internalisation made it difficult to see the perspective of the witch or of others, while in the moment. Sir Thorne had his baggage, his immense guilt, shame and horror. The same applied for all of the others. All but Elouise. Her power and agency had been removed. She is equal parts our victim and a tormentor of the group, conscripted to troll with us and play off our tics. The experience was fascinating and haunting. The story is scripted with a journey set in stone, but the ultimate outcome is varied, as is the actual content of the scenes. This is why I feel unashamed in sharing the scenes I had as Thorne and the direction our game went in. Yours will be different, mine will be the next time I play it.

Witch is an incredibly simple but effective role-playing game. It’s a perfect one-shot to show people an intense story without any level of crunch to it. You can pick up Witch: The Road to Lindisfarne for £4 here.

User Score
You have rated this
0 likes
RPG
DriveThruRPGRPGWitch: The Road to Lindisfarne