by Charlie Etheridge-Nunn on December 5, 2017 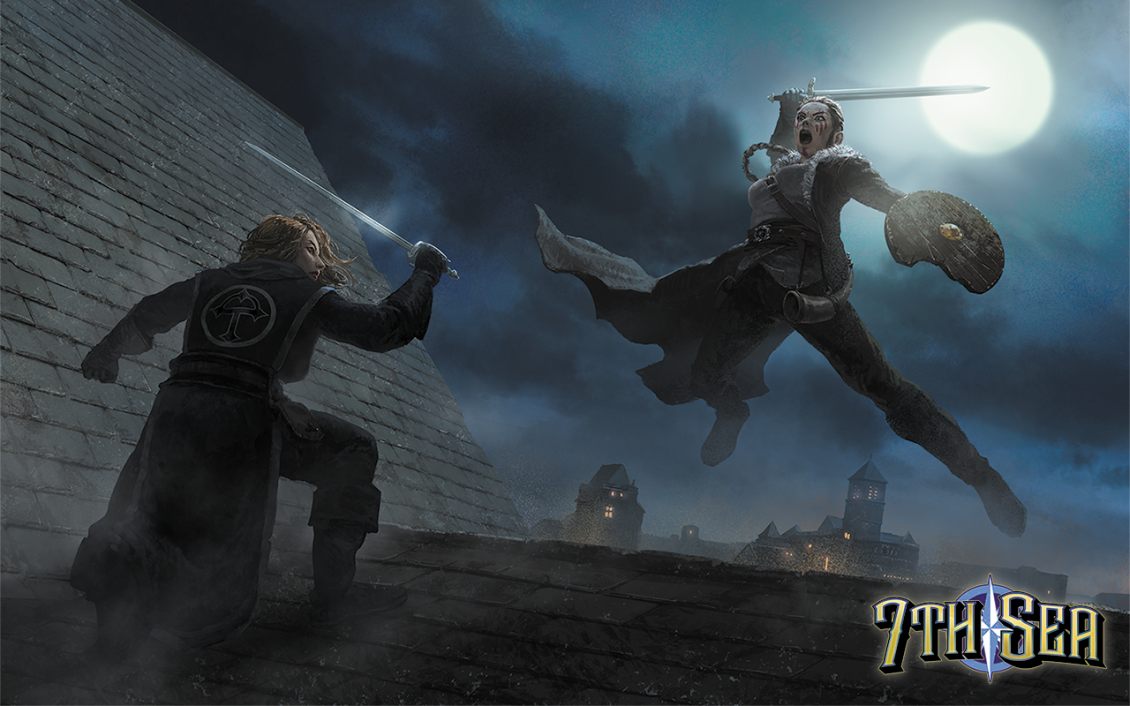 Ash as Remy, a drunken ex-musketeer with a lot of fancy hats

We tried to break the Grande Aldana out of prison. Okay, no, we thought about it while bothering a giant tentacle monster artifact, getting attacked by guards and then losing Vanya who was put in prison. So we pretty much did the opposite of what we needed to do. And without Amy in the group this week we retconned it that she was also imprisoned last session, meaning we made things even more bad for ourselves. Now there was no option but to have a Thean prison break!

The heroes tried to work out a plan which involved switching out the Grande and Vanya, both of whom were held in the tallest tower. Their replacements would be some of the agents of El Vagabundo who were known to have infiltrated the castle last session. Everyone assumed Vanya would be fine for a while until we figured out what to do.

At that point in the prison, a priest came to take a blood sample from Vanya to test if he was a sorcerer. Which he was. Things weren’t going to look all that good after all.

The heroes had been diminished somewhat, until Nina remembered Remy was still somewhere on the boat, locked in a secret compartment. Despite the antipathy the people of Castille had against the Montaigne, we were down a few people so he was tagged in. Nina flattered him into calming down for being left for a day in a secret compartment with limited wine supplies. She did say to blame Finn for the shoddy secret hatch.

The group started to work out what to do.

Nina would bang on doors to try and drum up help, apparently Les Mis-ing.

Effy entered the prison with her Second Story work and would pretend to be there on legit business if asked.

Remy said he would resist hitting Castillians and Finn, instead he would take out some guards and go in, disguised.

Vanya would remain where he was until he was taken to the gallows. These were the classy gallows inside the prison grounds which were used for the more high profile witches.

Finn met up with the spies and reached Vanya’s location, only to find him already gone. Nina managed to rile up the crowd who really liked us. They were protesting about the lack of booze under the Inquisitor occupation. In amongst the crowd, Nina felt the sensation of someone touching her thick Samartian cloak. It was the Inquisition.

Effy tried to appear official, then saw through a window a courtyard where a stern-looking woman was leading Vanya to the gallows. This woman was Julianna Onesta, a renowned villain and member of the Inquisition.

This art comes from the Heroes & Villains 7th Sea book. For a recent edition, John Wick Presents have been pretty quick and open about their production. We were shown the image from the Heroes & Villains KS preview, but you guys can get her whole story in the actual book. I’d not read that yet, so I didn’t know the full story. Still I had Effy charge into action, vaulting into the courtyard and grappling onto a balcony trying to stay out of view.

Remy found a drunk guard, knocked him out, stole his clothes (which were too tight, just the way Remy liked his clothes) and also saw Vanya.

Vanya was taken up to the gallows which was apparently supposed to throttle the life and the curse out of any witches. A ‘soft drop’, rather than breaking his neck right away. He used his contacts with Die Kreuzritter (a monster hunting secret society) to have a guard in the courtyard loosening the bonds around his hands. Vanya told an Eisen dirty joke to try and buy time.

Julianna did not care for this, being incredibly stern and dogmatic. She looked Castillian, but was explaining the ceremony in Vodacce. “Get this over with,” she said to one of the guards, “Then we can execute the real prize. My sister’s lover.” She started to prepare the noose.

Whaaaat? Yeah, soap opera shock, she was the sister to the Fate Witch who Grande Aldana was shacking up with (and by extension the duellist Finn offended last session). With that shock out of the way, we sprang into action.

Nina tried to intimidate the inquisitors with the large crowd. Remy startled some horses into the courtyard with, calling out that it was time for some sexy warfare.

Vanya tried distracting the people in the courtyard, even though he was still choking.

Effy saw a guard on the balcony who could get in the way, she bounced her grappling hook off him, knocking him out and then tried to use hand signals to reassure Vanya it was safe. The hand signals were ones she’d petitioned the Explorer’s Society to adopt but they’d not written back. Basically no one knew what the signals meant, not even Vanya.

Nina used her magic to instill fear in one of the guards who freaked out that one of the others was a witch, causing them to take each other out. Remy attacked more inquisitors and nearly said that he ‘killed’ two of them. Ash is a bit of a murder machine, so we reminded him that in 7th Sea you say ‘K.O.’ Nina started drinking some stolen wine, inspiring the same in the others.

Juliana swore as everything was falling into chaos. She put the rope around Vanya’s neck and said she would make this execution as painful as possible. Vanya kneed her in the groin and used his position in the noose to whirlwind kick Julianna away. Nina decided to use her fire dievas to set light to the gallows. Um… Fire bad, Nina.

Seeing this, Effy waged a one woman was against physics by slinging her grappling hook down, through the noose and yanking Vanya off the burning gallows by it. She swung him around, knocking over three guards. He pretended to be a witch while he flew through the air. One guard did mumble about being able to see where the wires were, but he was knocked down. Effy saw an old fountain and dropped Vanya in it, to put out the fire which had spread to his noose.

Upstairs, Finn swapped El Grande Aldana for a spy. We weren’t quite sure what was being done with the spy, but Finn wasn’t in communication with anyone else and we weren’t going to discuss any of it with him to help out.

Julianna went to attack Vanya, drawing out a whip. Nina sneaked away and gathered some horses for us all. Vanya was knocked senseless by some of the remaining brute squad, barely out of the fountain.

Remy rode back for Vanya, shouting, “Get the witch!” as he was still dressed as a guard. Going back for a comrade triggered his virtue and gave him a Hero Point. Nina incited the townsfolk into a riot. Julianna grabbed Vanya’s special harpoon to go in for the kill. Effy bound the blades of the guards who were still in the courtyard, and of Julianna.

Remy decided as well as rescuing Vanya, he would try to set light to the castle, charging in on his horse with a burning torch. He grabbed Vanya and we fled. Vanya snatched back his harpoon and removed the rope from his neck.

Finn and the Grande jumped onto the gathered horses from a higher floor and we managed to flee! Nina got off her horse and shouted that El Vagabundo was escaping, to try and get sow seeds of rebellion.

As we went to leave, there were more guards in our way. Effy used her grapple to launch herself into the courtyard and then fling herself back out. Remy made a speech to the populace while Vinnie rolled roughly a million tens to get everyone in the brute squad downed. Finn shot down some people in guard turrets. Effy grappled onto Julianna and hitched her up against a balcony, stole her whip and fell out of the window onto a horse. Jacob asked whether I wanted to have Julianna as a nemesis for Effy. I didn’t feel there was much motivation for this to happen but when someone asks if you’re going to get a nemesis, you say yes.

Remy ripped open his tear-away guard clothes to reveal an El Vagabundo outfit to make it look like he was right here. Nina drew attention to this fake Vagabundo and called out that El Grande was free, the Inquisition could sod right off and to make way for El Vagabundo!

Julianna ran up to El Grande’s prison, took out the spy dressed as him and threatened to slit his throat. Vanya harpooned the knife out of her hand and in amongst the crowds, the real El Grande revealed he had already escaped. The spy looked nervous, realising he was even more likely to get killed now. Remy shouted for him to jump and he did, landing safely in his arms.

Everyone made it out! The group celebrated and then realised that there was one conspicuous absence. Galina was still a captive. Oh dear. That wasn’t too smart. It was getting late, so Jacob asked how we were dealing with the remaining problems and we ran through them in the narrative:

Rescuing Galina – Effy went to the Fate Witch Alessandra Onesta for help. They reached the palace to find Galina already escaping with guards hot on her heels. Remy grabbed the trio and got them out of reach of the guards.

Weapon Exchange – Vanya’s harpoon was missing. In a quiet moment, he tried to set up a trade after finding that the whip was monogrammed and evidently special to Julianna. In the meeting a misunderstanding led to a fight which drew fighters on both sides. In the confusion, Vanya managed to get his harpoon back.

The Figurehead Debacle – Finn had his crew find the best figurehead in the large amount of land-locked ships at the docks. He had them board the ship and take an oversized angel figurehead as the ship’s new one. It didn’t quite fit as Remy had vandalised even more of the ship in revenge for being locked in the secret room. Also the crew being a band of incompetents left the Dawn Star’s lifeboat as a makeshift replacement figurehead for the ship they’d stolen from.

The New Government – Nina gathered the local factions of resistance to a rally. Powerful merchants and criminals use this as an opportunity to set up shop, but even with this there was still an opportunity for hope and democracy to grow.

Leaving – There were rumours of El Vagabundo returning, so when we tried to leave, a bunch of Castillian guards landed on our boat to inspect everything. They scuffled with some local soldiers and we fled just as they realised who we were. A boat called The Prophet’s Fist started to chase us all the way to Eisen!

On the boat, Effy noticed that Remy wasn’t taking his gloves off anymore, but decided to keep it quiet. Our homework this time was to work out the crimes which Vanya had been accused of. 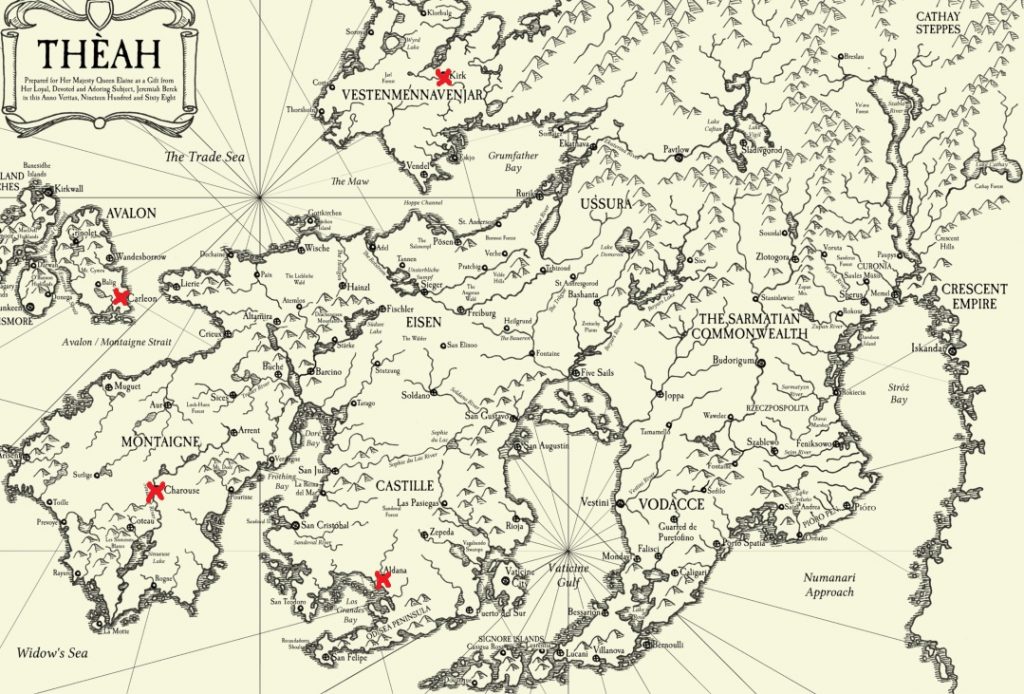