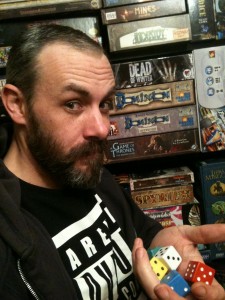 Hi, I’m Mike B, Host of Who Dares Rolls.

So a little bit about me, well I’ve been playing board games for most of my life. I started on all the usual games we all do in our formative years (Escape from Frankenstein stands out of a favorite at this time) and was always fascinated with them. In my teens I really embraced the hobby diving into Games Workshops output from the 80’s their Judge Dredd games and a lot of the licensed bits they where churning before they became expensive and miniature obsessed. I also became embroiled in the role playing scene playing regular D&D games Paranoia and White Wolfs Vampire.

As I matured I moved onto table top war games specifically Warhammer 40,000 and the Epic line along with their short lived Space fleet, Dark future, Space Hulk and Space Crusade. I was obsessed with this stuff and during the early 90’s greedily yummed up the new games arriving on our shores from America and Europe.

About this period I started working for Nintendo and having a large disposable income I started funneling it into comic books. I kind of let board games go about then and unsurprisingly with my occupation became a video game nerd, writing for some games magazines and becoming involved in Channel 4’s Gamesmaster show and SKY’s Games World.

I did however keep my hands on gaming in some capacity and moved to CCG games specifically Deciphers Star Wars game and a dabble with Magic and the then ill fated Net Runner.

I sort of fell out of love with the hobby and packed up the games and comics and became respectable if for a small period of time, somehow acquiring a wife and kids. I was all but done and sold a large portion of my collection when son number 1 first appeared on the scene. (sob)

A couple of years ago after a brief Warcraft addiction and intervention I became embroiled in a new gaming group and we started cracking out some of the classics, Risk, Diplomacy and Heroquest. We’d become a bit bored of the same old stuff so one lazy afternoon I started to do a bit of research online for a new game. And that as they say was that. It was as if the heavens had aligned set into motion by the gaming gods because board games where back and better than ever and I’ve been unable to shake that addiction since.

This is an amazing hobby and right now its an amazing time to be part of it, so pull up a table grab some good friends and get rolling those dice.

I play regularly at the Southampton On Board gaming group, so if your in the neighborhood don’t be a stranger.