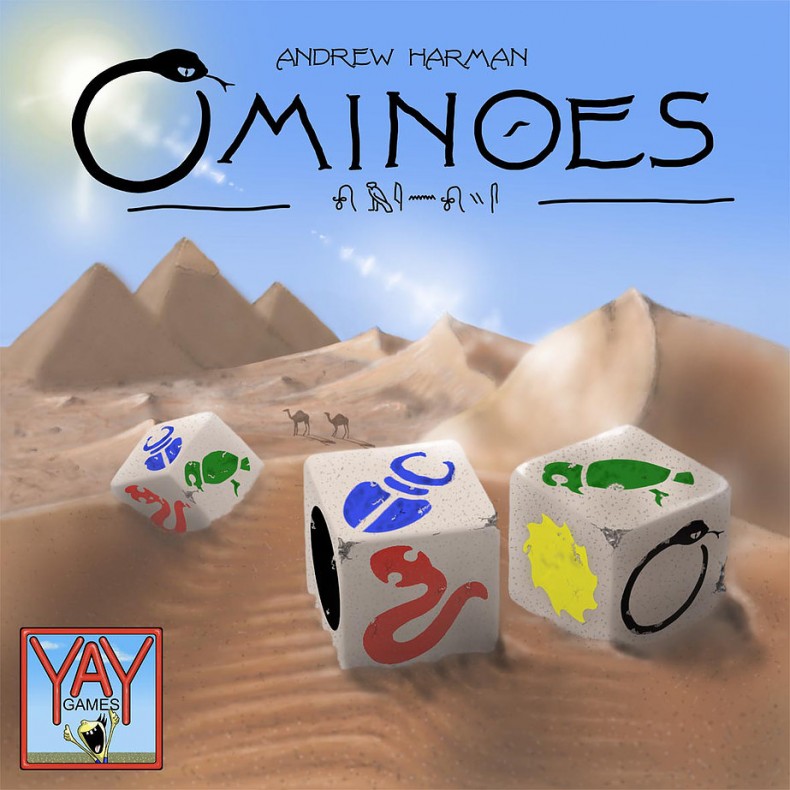 Taught in seconds, instantly enjoyable.
It has lots of Ominoes!

It is random and it has dice so be prepared, or get over yourselves and just dig in.

This is just a solid and fun little gem. You can literally take it anywhere and teach anyone and get playing instantly. Its fast and once you get going has that got to get one more game in quality to it.
And of course our favourite is that you can pull off plenty of dick moves huzzah!

Like Omar Sharif’s entrance in Lawrence of Arabia, Ominoes has slowly materialised on the horizon building a palpable sense of anticipation and fascination as it took as damn well long as it pleased getting here.
And then the other day completely unannounced the bloody thing just dropped on my door mat, Whizzer! 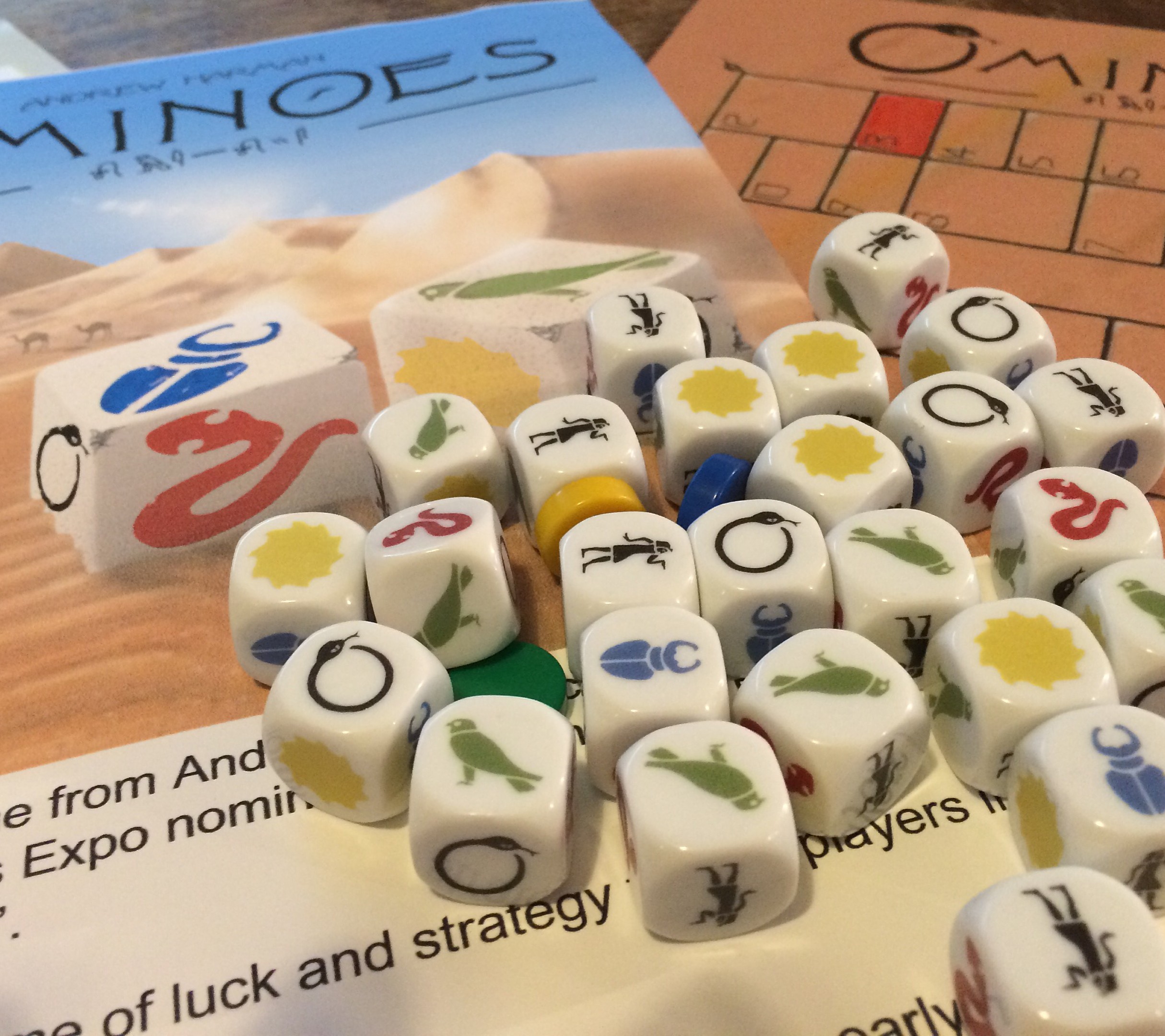 Ominoes is the third title from Yay Games and designer Andrew Harman and as with his previous eclectic output Frankenstein’s Bodies and Sandcastles the focus is on precisely the sort of games that we at Who Dares Rolls totally dig, fast and loose with an eye to poking your opponent in theirs.
So what’s all this Ominoes business anyway? Well during an alleged excavation out in the sun-bleached Egyptian deserts Andrew unearthed these strange Ominoe cubes (don’t mention the dice word, we did it once and I think we got away with it) and as it turns out they can be used in quite the fun little game. 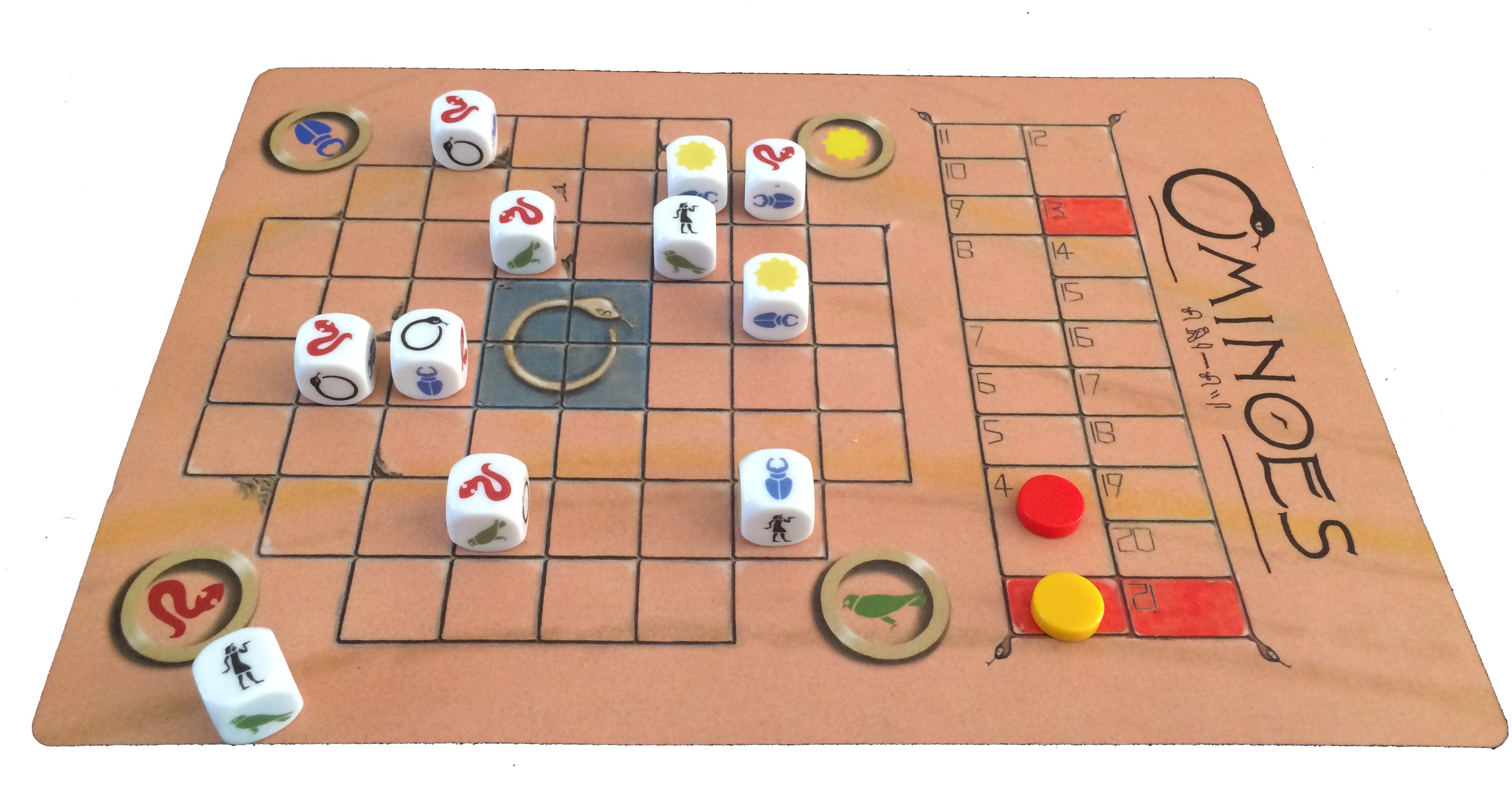 The game takes place on a grid each player starts by picking a colour between the four available and in turns populates the board with two Ominoes of their facing.

On a turn, players perform three actions.
First, you roll an Ominoe and dependent on what facing is shown something happens.
If it’s one of the colours, then a matching cube on the board is moved three spaces in any direction, no diagonals and no backtracking.
And then that freshly rolled Ominoe is placed wherever the player wants. And that’s it. 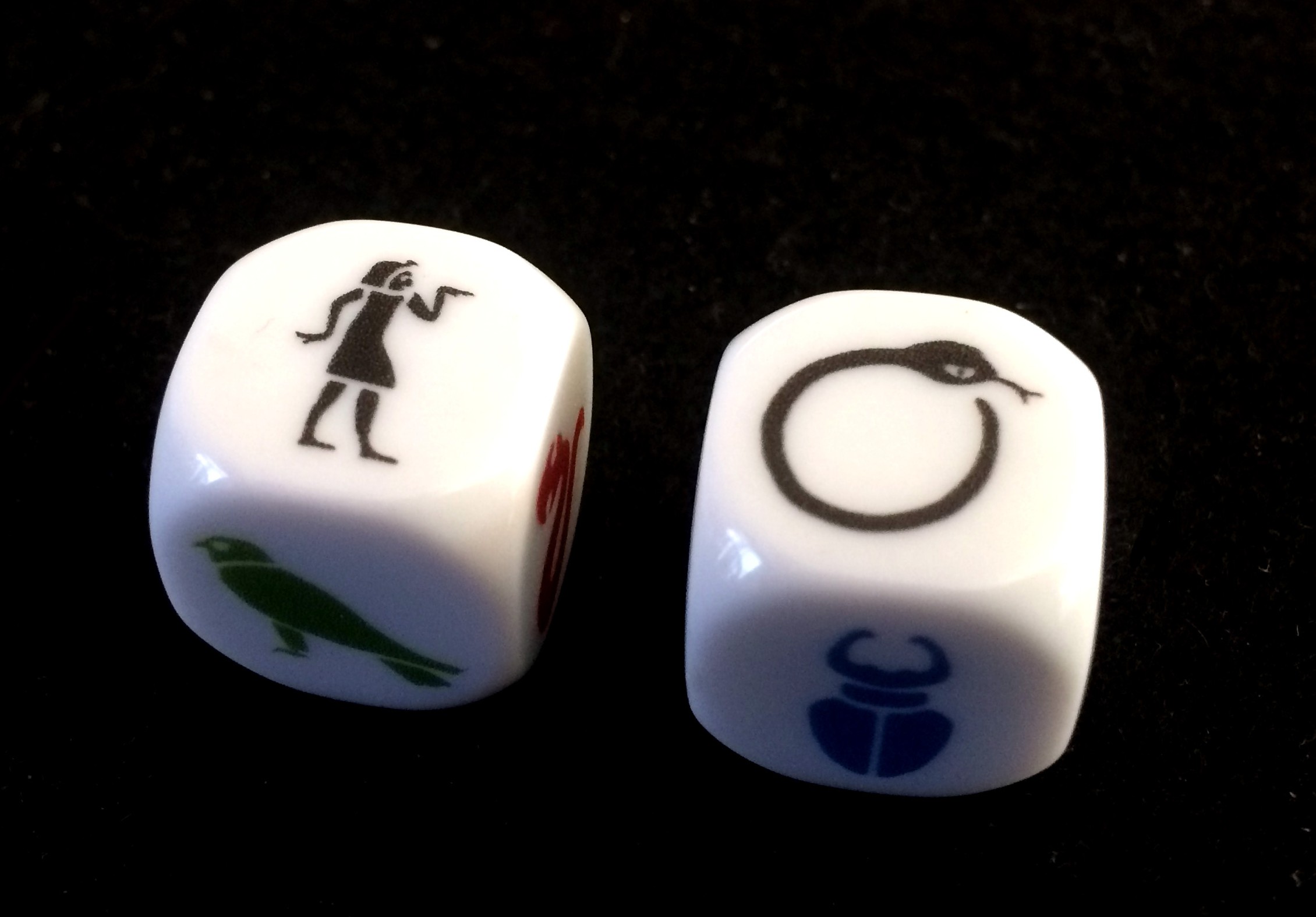 There are two other facings, there’s Yay-Ra – the mover which allows you to move any cube already on the board as per the rules above. And the other is Ominotep – the black serpent or “shaker” as we affectionately named him. He allows you to choose any placed Ominoe, pick it up, reroll it, and then return it to where it was with its new facing. And that is really everything you need to know to get going.

What players are attempting to do is make sets of four or more of their colour, the mover and shaker are ‘wild’ and can be counted as any facing. Once a set is scored its removed from the board and the Ominoes returned to the pool. 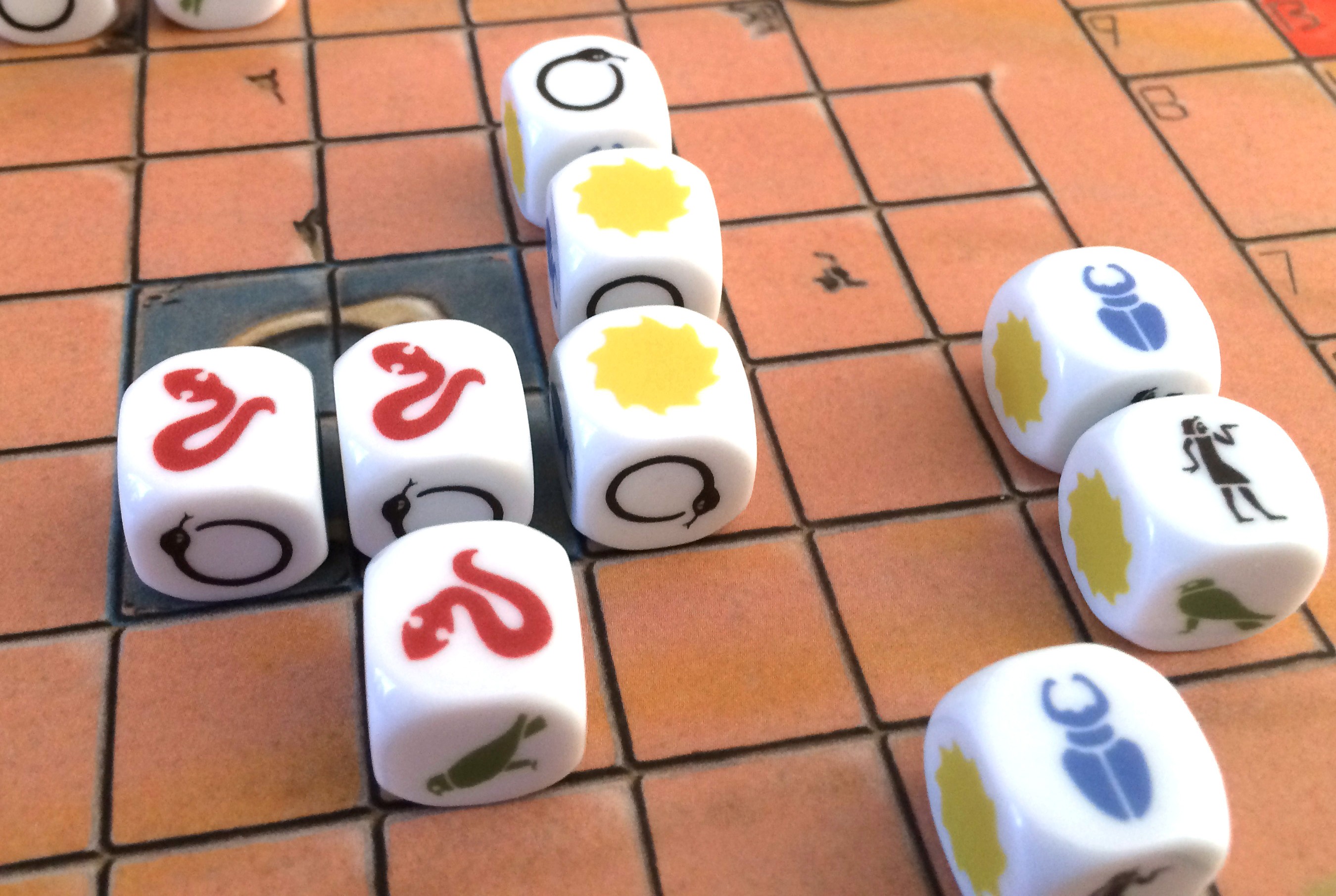 So this is an abstract strategy game, the addition of luck and the die rolling messes with the fundamental rules of the universe and abstract game descriptions thoroughly and it shouldn’t work, but it does. It’s like some crazy mad science.
I’ve personally never been a huge fan of abstract games, I prefer something with a bit more story. But what this lacks in tall tales it more than makes up with in heaps of Ominoes! Whatever! Rolling great fistfuls of dice is one my most beloved pastimes of our hobby and I applaud any game that integrates them into its design I’m looking at you Quarriors and Dice Masters.

With its whip-crack set up and explanation, I’ve enjoyed this with players from all walks of gaming experience and age. I honestly think that this has the legs to join such evergreen titles as Hive, Ingenious, Tsuro and Through the Desert.

Yes, the game is beholden to the fickle gods of chance however the Movers and Shakers do supply that pinch of mitigation and a dash of push your luck to shake up the game and open up the choices and strategies you can employ. I’ve played a healthy number of games now and they’ve all been squeaky tight affairs. 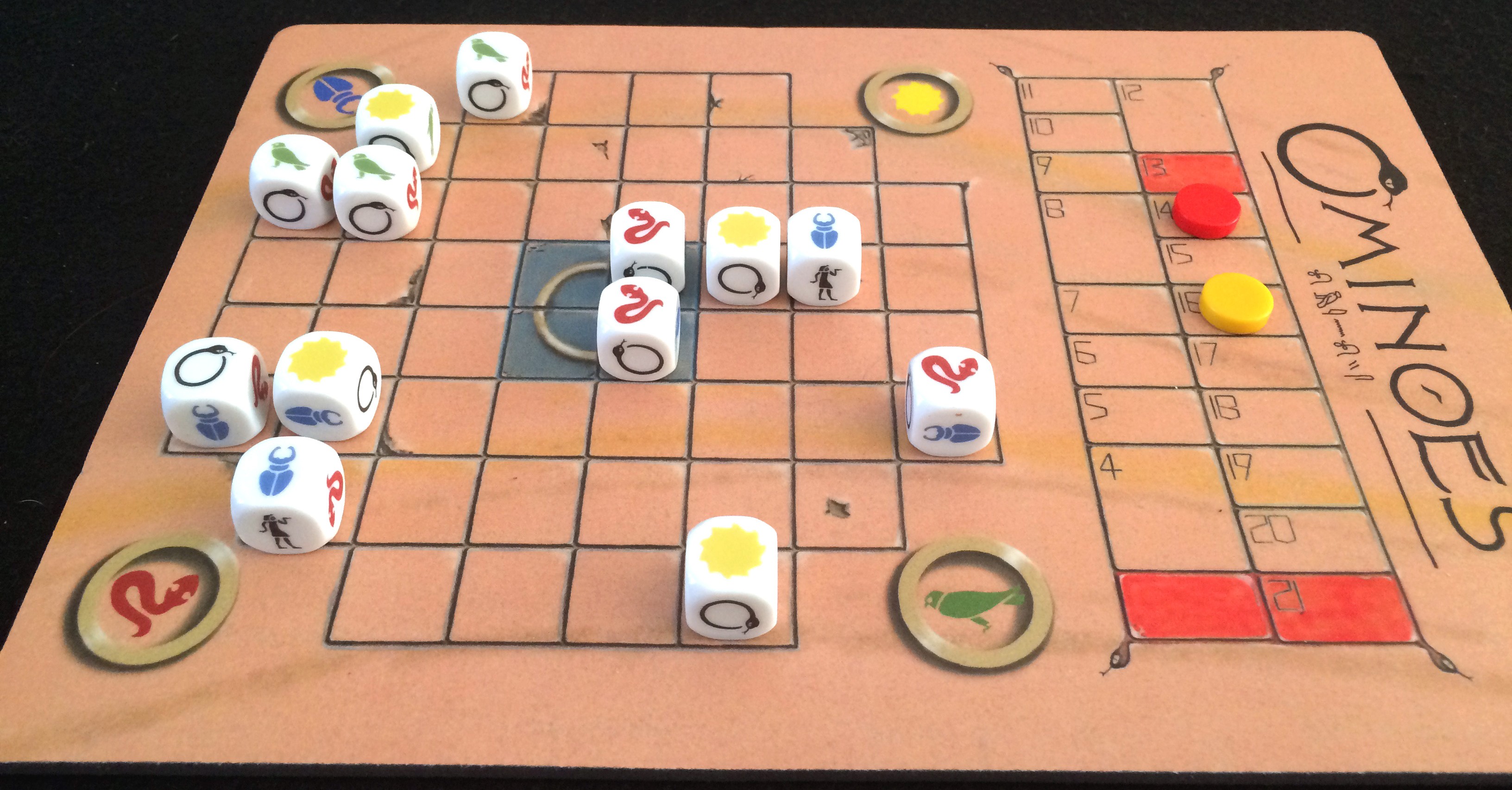 If I had to grumble, occasionally things can stall mid game when the board is jammed and you’re down to that one final cube being rolled until somebody gets lucky or makes a mistake. It’s not a deal breaker and we noticed it less the more we played but that moment can turn what’s up to then a lively jaunt into a porridge like trudge. However, the advantage of having the board loaded with Ominoes is that the chances of hitting a set are high and then we’re off to the races again.

Coming to the design with my bowl held out “please sir I want more”. It would have been cool if the individual colours had powers of their own, offering just a slight asynchronicity, now this may have been jettisoned during design stages to avoid complicating things it’s something that I imagine could be added as an advanced rule or expansion?

Anyway, this is all harping for the sake of it, what Ominoes offers is a game that’s effortlessly easy to teach instantly intriguing and has enough emergent strategies and exciting choices available to make it a refreshingly short, sharp jolt of addictive fun.

This comes highly recommended but where may you ask can you get yourself a set. Well, a deluxe limited edition of Ominoes will be available direct from Yay Games in April in a shiny tin with the handy play mat I have in the photos. Later in the year, a more mass market edition will be available with cardboard board and box. 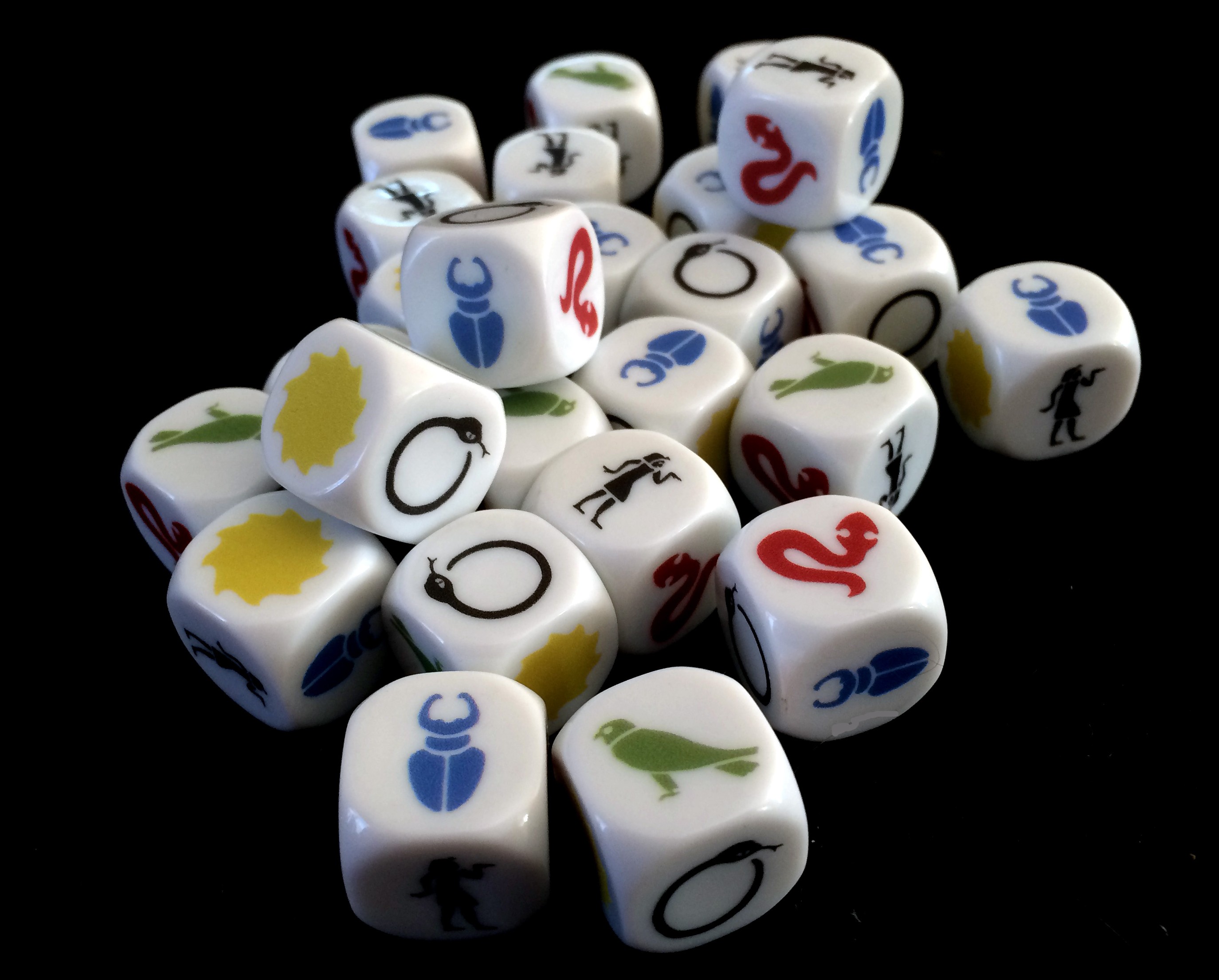