A Study In Emerald – 2nd Edition 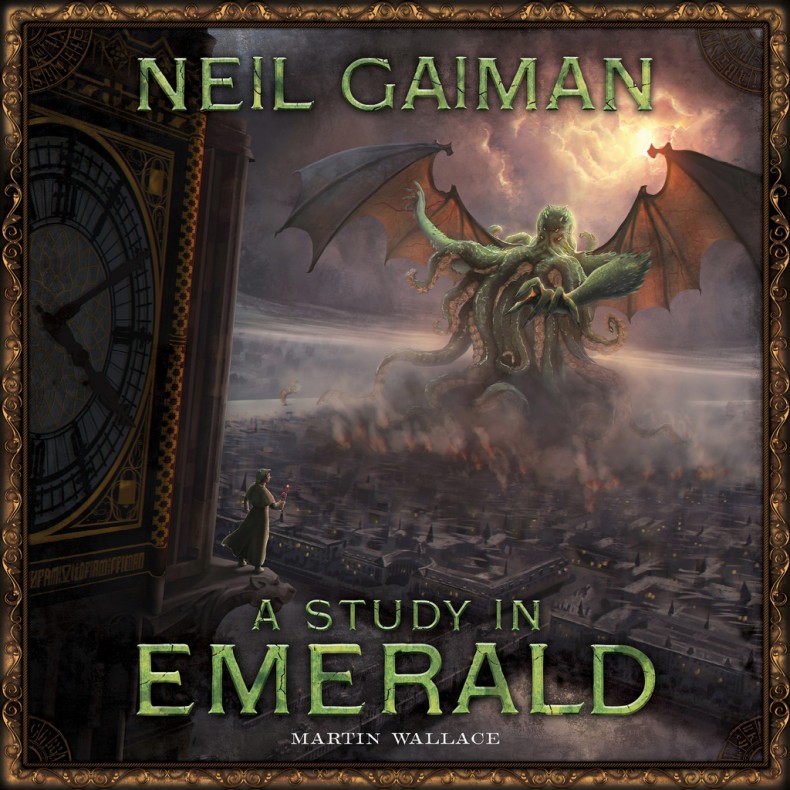 Streamlines the convoluted some may say crazed smorgasbord of the original into a much more easily playable version.
Offers huge amounts of re-playability.
Its got Sherlock and Cthulhu all in one box...Duh!

Has sacrificed much of the inspired craziness of the original making it an easier ask to get to your gaming table some may be left wondering where all the game went.

Despite this being the cover version of the original concept album and losing some of that first editions quirky charms this is still a worthwhile and thoroughly enjoyable game taken on its own merits.

What initially drew me to this was not designer Martin Wallace criminally this was my first sampling of his work, but rather its inspiration from the short story by Neil Gaiman. Gaiman’s tale collides the worlds of Doyles Holmes with Lovecraft’s Cthulhu mythos into the sort of thing to get any self-respecting geek into a froth. 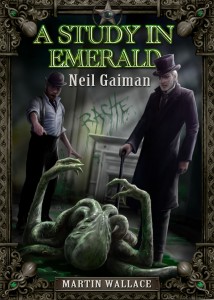 The premise is simple, it’s 1881, and the ‘Old Ones’ have been ruling the earth for hundreds of years. Most of humanity have accepted these elder gods, but a growing underground movement labeled the Restorationists seeks to overthrow this regime. A secret war is being fought around the cities of Europe between agents of the Restorationists and those loyal to the powers that be. And that’s where we come in.

Originally released a few years back the 1st edition of Emerald soon became quite sort after and, more importantly, expensive, that version was a glorious hodge-podge of ideas and received as many claims of brilliance as howls of dissent over its complex rules and multiple sanity draining strategies employed in a victory. For these reasons although I very much wanted to own this it was just something I knew would become a collectors piece gathering dust rather than plays. 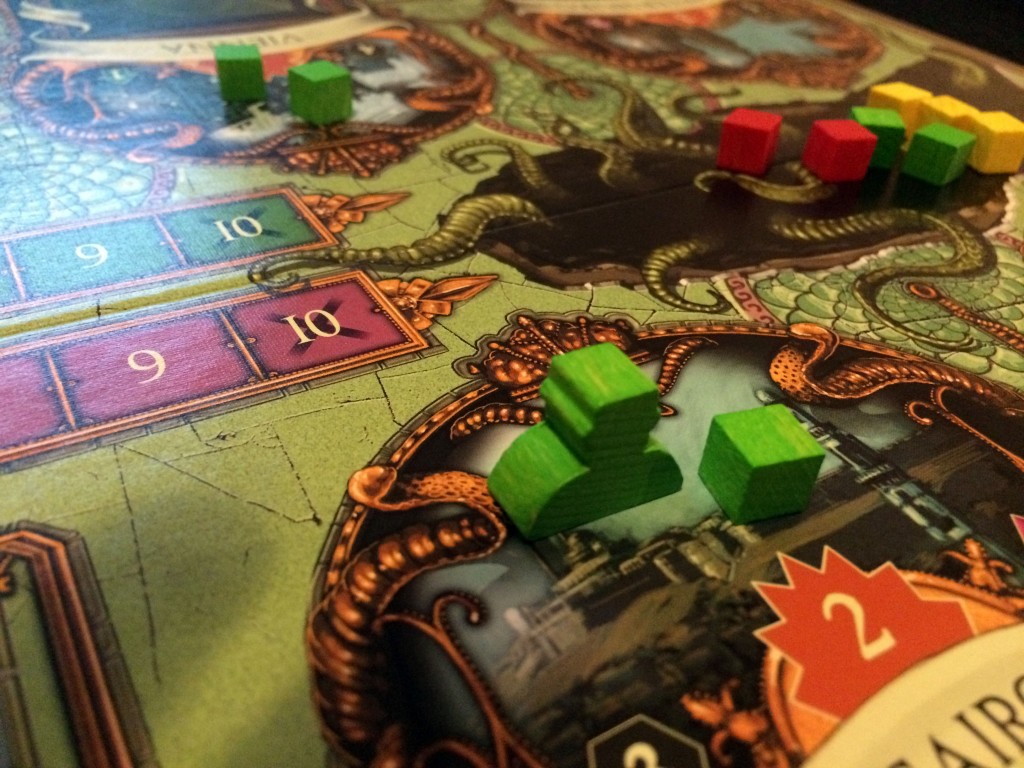 Well, fortunately, Wallace decided to revisit the game giving it a facelift and most importantly streamlining down those tricksy rules and gameplay into something that your more casual observer could get their teeth into, given this second opportunity how could I pass.

Despite its perceived ‘Dumbing Down’ the game is still an intensely interesting mix of mechanics and strategies. Combining a hearty chunk of deck builder with area control and influence players will either be fighting against the Great Old Ones as Restorationists or beside them as Loyalists. At the start of the game, players are dealt a secret card that identifies which of these forces they will be fighting for and are then given an identical starting deck of cards. 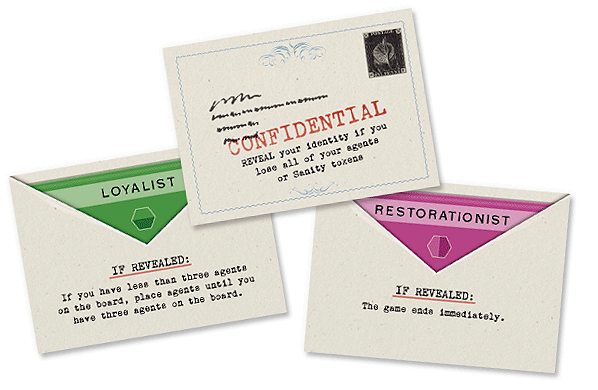 Essentially if you’re a Restorationist, then you’ll want to take out the Eldar Gods as they sprout up across the board earning you victory points, but forever cautious that you don’t lose your mind in the process. Yeah, this is Cthulu, of course, theres sanity to be lost and we get a whizzy dice to assist with that Huzzah! The loyalists meanwhile, will be biding their time building the most powerful deck with which to assassinate these enemy agents before they can kill their masters. There are many other subtleties to what you’re doing but this helps to give an idea of what’s going on..

To start each location on the board is populated with an ‘Old One’ and a random draw of cards from a larger deck. It’s from these that we’ll be collecting cards which go from simple victory point grabbers to zombie apocalypses. Adding huge replayability is the fact that you only ever see a small fraction of this deck each game and rarely the same combinations.

In truth, the rules and getting going is surprisingly straight forward, it’s certainly not for muggles but once explained or a round played most hardened gamers should soon get a grip on things.

On a players turn, they can complete 2 actions represented by icons on the cards and multiples of the same ability can be performed as one action. These consist of anything from buying cards, moving agents, placing or removing influence to assassinating something. The strategy comes from the need to populate the board with your influence and agents to enable you to compete for control of locations, only players with the most influence and pieces can buy cards or indulge in a spot of surprise homicide. 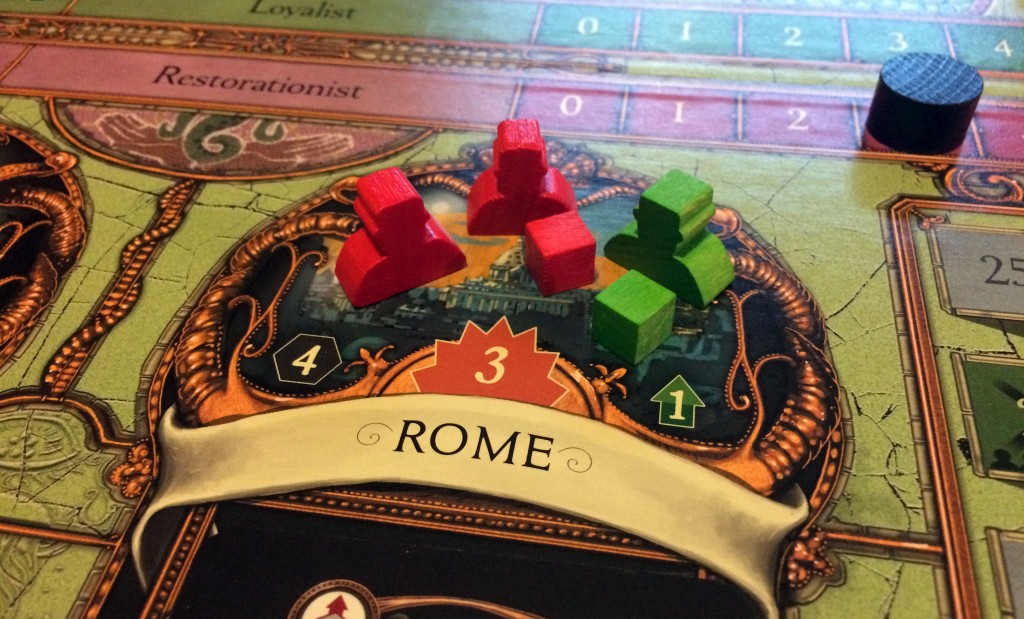 As well as juggling these factors you’re also attempting to work out who is on which side, which can be harder than you’d imagine. Its worth noting any points scored during the game are lost if their not your allegiance. And this is important because there is also a score track for both forces and this will take greater significance in the end game with the winning team taking those points and the losers, losing them.

It’s this thick stew of intrigue, deceit and area control that captured my interest and it’s a heady brew that’s a joy to sip.

I’ve never sought out Wallace’s games despite his respected following long suspecting them to be beautifully complex but themeless euro cube pushers, well now who looks an idiot. OK so this isn’t oozing with the lavish production values of a Fantasy Flight title but this more than punches above its weight in pound for pound of pure game and mechanics squeezed into the one box. There’s the deck building going on but then also that whole semi-cooperative business with the secret identities, then we have the area control thing happening and even a pinch of cube pushing and accounting as you struggle to keep as much influence in play as possible. And then the stabby occultist on top of this gate is the variety of card actions some of which add whole new mechanics into the game. 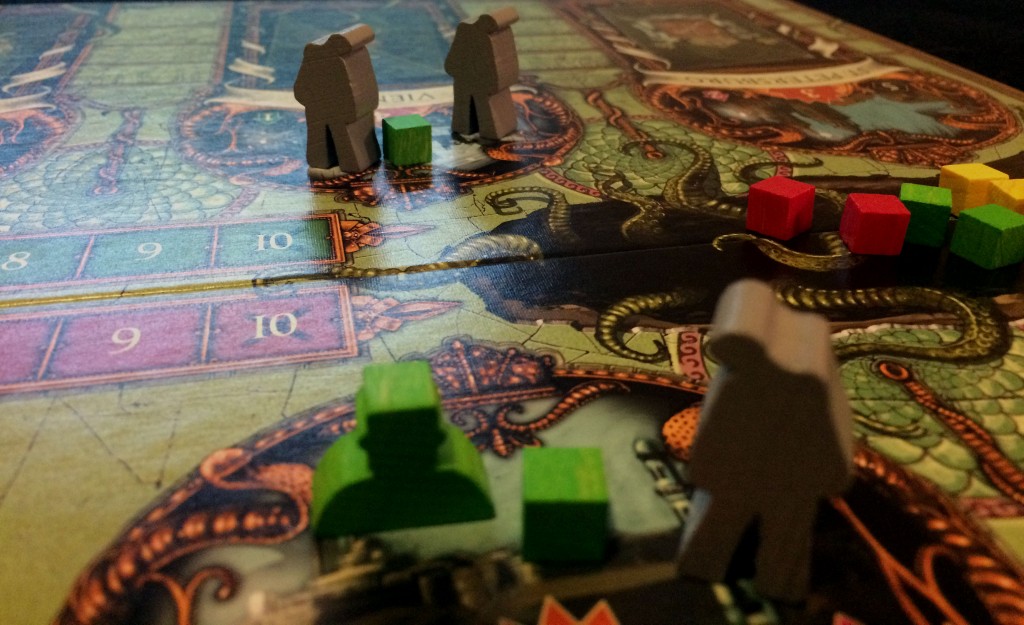 As to comparisons between this and the first, not having played, it’s impossible for me to say with authority. But from what I’ve read and seen its streamlined much of the madness inducing intricacy that came from the Vampires, Zombies and other monsters that held a much larger permanent sway over proceedings, it’s also smoothed out and diluted the complexities around the agents and assassinations.

If you’ve never played the original and at this time unless you know someone with a copy, it’s something only a wealthy obsessive would seek out and buy then this is a worthy alternative. As Wallace’s intent was with this edition to offer the same feel and style of game but with a far more approachable set of rules and brisk playing time, this is what you get.

If you were put off by the sounds of the first this is certainly one you should reevaluate its tickled all my happy places and has enough meat on its bones and variety that it’s one of those games you go to bed mulling over strategies eager to give it another whirl. I’m a convert and will be following up my misadventures among the Old Gods by heading out to the heavens ‘Onward to Venus.’ 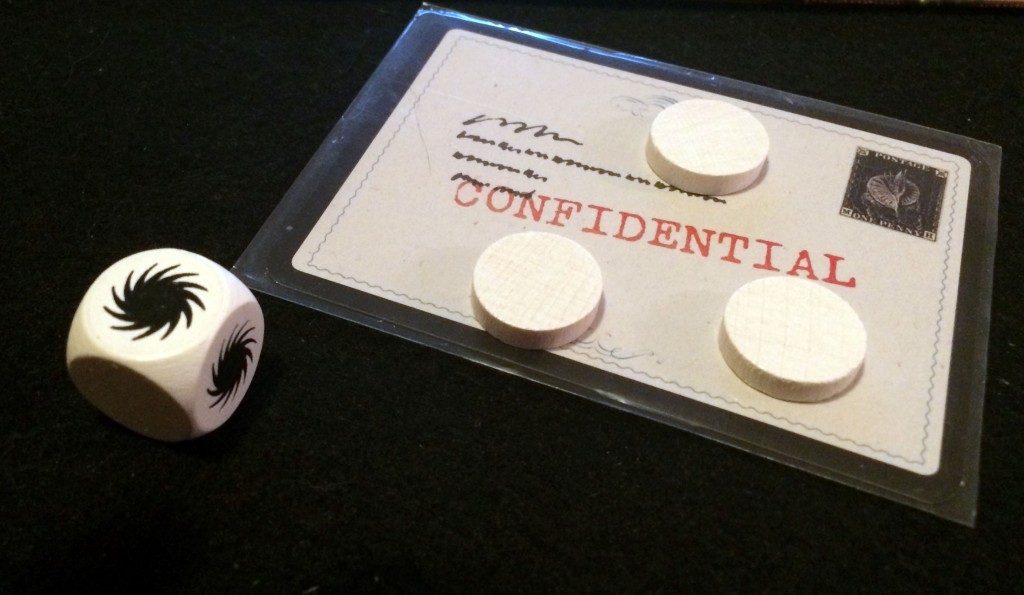