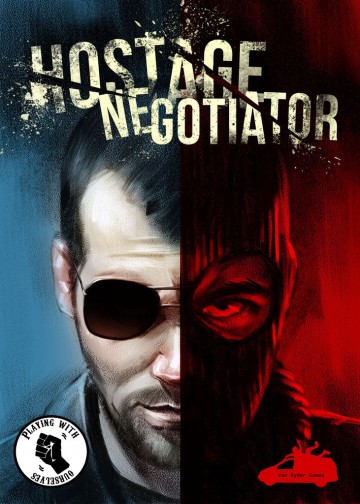 A unique theme.
Plenty of nail biting decisions and variety.

Some may take issue with the Hostage situations.
Dice chucking, there are some who don't like this. If you don't like dice in your games then this isn't for you.

So this is a tight and fun little package, there's a good amount of variety the three abductors each have a distinctive feel and story. It's a slam dunk for me based purely on the dollops of theme that are dribbling all over this combined with the mix of mechanics and some good old fashioned dice chucking make it a uniquely cool box of fun.

Hostage negotiation Hollywood has mined this genre creating some thrilling and nail biting flicks Dog Day Afternoon, Speed, The Negotiator and The Taking of Pelham 123 (the original not the remake) are all excellent examples. All are chockful with twists and turns featuring more cat and mouse shenanigans than a Tom & Jerry marathon.

It’s surprising given the subject matter then that we’ve not seen more games based on this theme, it’s an idea ripe with possibility and could make a damn fine co-op. This isn’t to diminish Van Ryder Games efforts, what they have crafted is a pulse-pounding solo experience capturing the core of these dramatic face-offs with the stakes turned up to 11.

In a refreshing twist, of the three abductors included with the game, only one feels like the typical Hollywood bad guy the others represent hyper realised facsimiles of real world counterparts giving things a much more gritty flavour. Whether it’s the cheeky terrorist antics of Arkayne or the muddier waters of Edward or Donna they all feel different and their situations will throw up some surprising moral conundrums. 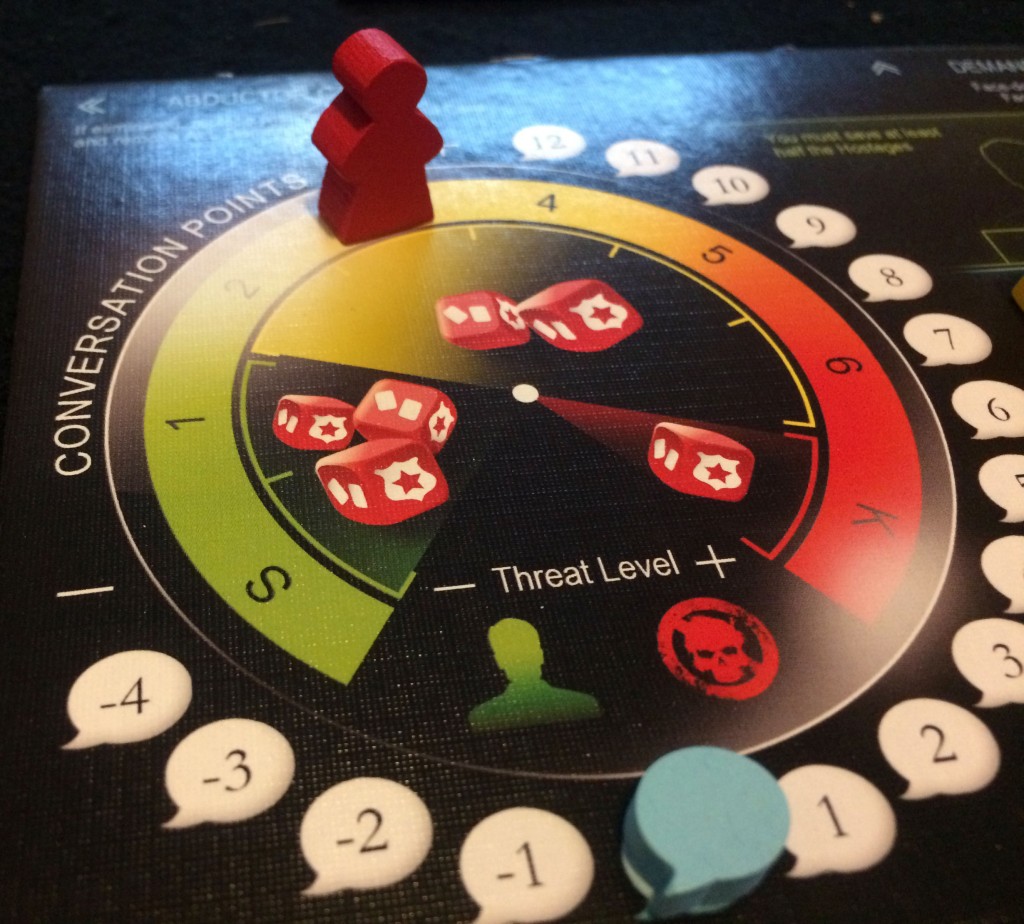 The object of the game is, of course, to negotiate the release of the hostages and the capture or elimination of the abductor, how this works is by you earning conversation points that allow you to buy better conversation cards to use. You also need to balance this against managing a threat meter a representation of just how calm your opponent is. Importantly if it plunges into the red, then hostages start getting offed its level also affects how many dice you have available to you.

Ah yes, this game has dice in it, we like dice. 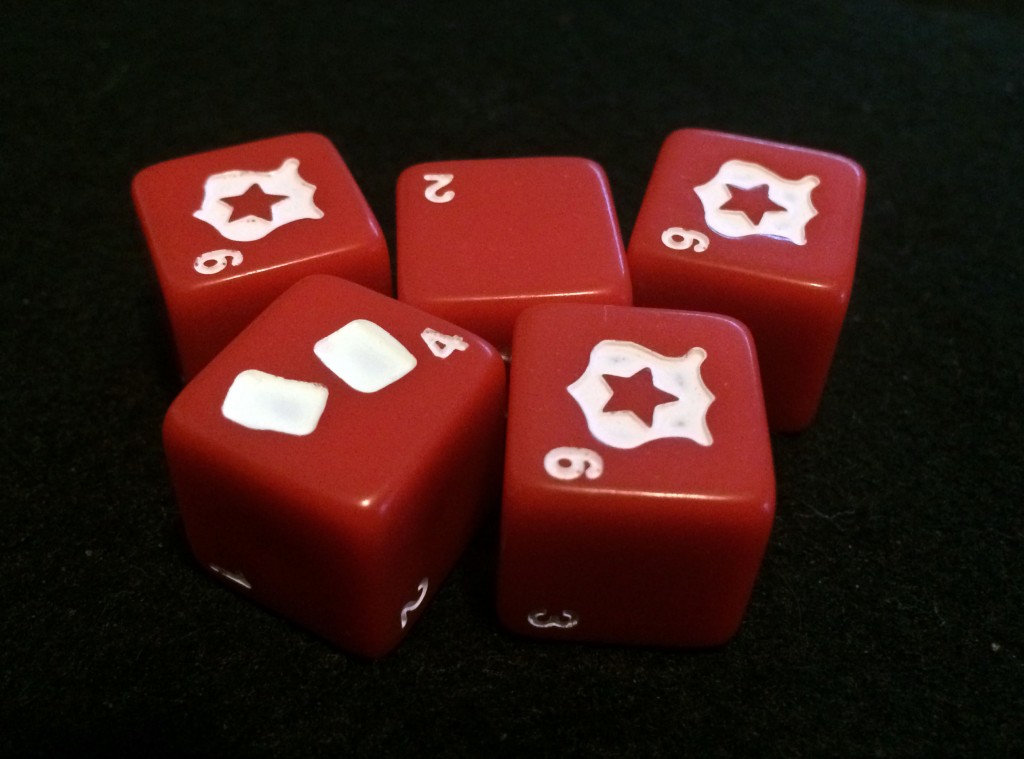 As the hostage negotiator, you start with a basic hand of conversation cards that when played give a variety of results dependent on the number of successes rolled either reducing the threat level, gaining points or even freeing hostages. It’s a gamble of how many cards you want to play and push your luck, some carry penalties for bad rolls by increasing the threat track while others kill the conversation dead stopping that rounds negotiation and the chance to play other cards. 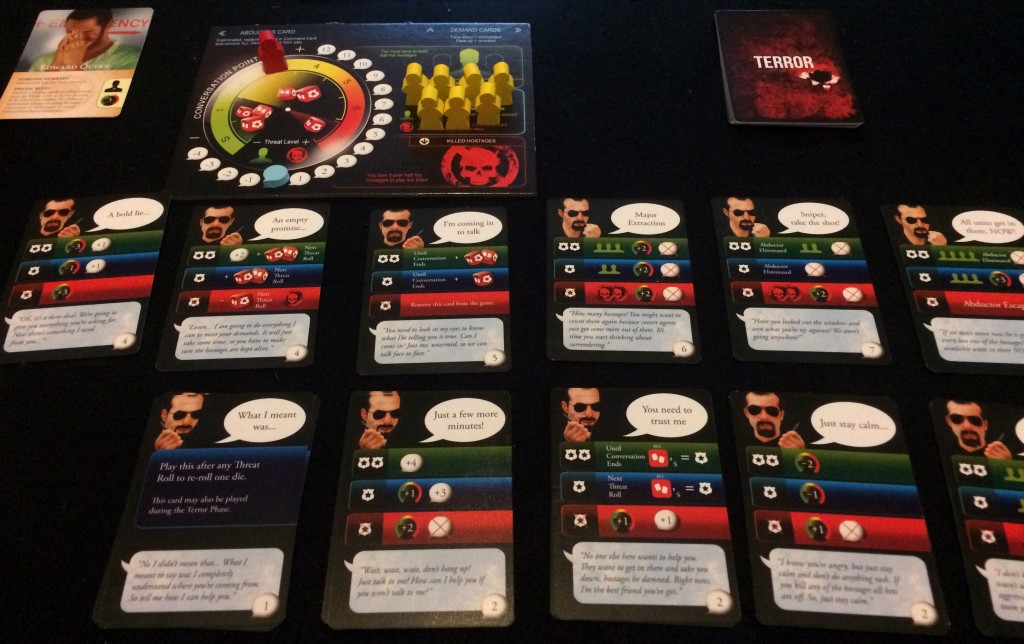 To mitigate some of the luck, these cards can be played face down to either earn a conversation point or two together change a failed die to a positive. At first, I wasn’t sure the dice just seemed punishing, but as a representation of the hostage situation and the push and pull of negotiation, it’s all rather clever. As the situation escalates, the dice reflect the erratic behaviour both sides would be feeling in this pressure cooker situation as you race to keep a line of conversation open buying you more time and better cards.

Once the conversation phase ends, you can spend any points earned on the cards available. These go in your hand for the next round of negotiation and any played return to the pool able to be bought in a later round. It’s a cautious game of knowing when’s best to play what cards and how many, building a deck and biding your time for the right moment to strike is the heart of this game.

At the end of a round is the Terror Phase where you draw and resolve one terror card, these represent the volatile nature of the situation throwing some interesting spanners into the works. They also function as a timer when this deck is exhausted then it’s times up and if you’ve not successfully resolved the situation, then things turn into the sort of mess that the FBI tend to get a bit twitchy about.

So that’s Hostage Negotiator it’s a lean and fast play kudos to designer A.J. Porfirio for coming up with such neat idea with a cracking theme. Some may be put off by the dice chucking nature of this as there is a lot, as a representation of the knife edge you’re on it works, life’s random, dice are random get over it.

Another interesting wrinkle is each abductor comes with Demands cards that are randomised at the start and once uncovered offer some interesting options where you can submit to their Demand for a bonus, balancing these with your hand of cards can make the difference to a victory or not. And of course, it’s not all beer and Pizza as some come with some nasty penalties. 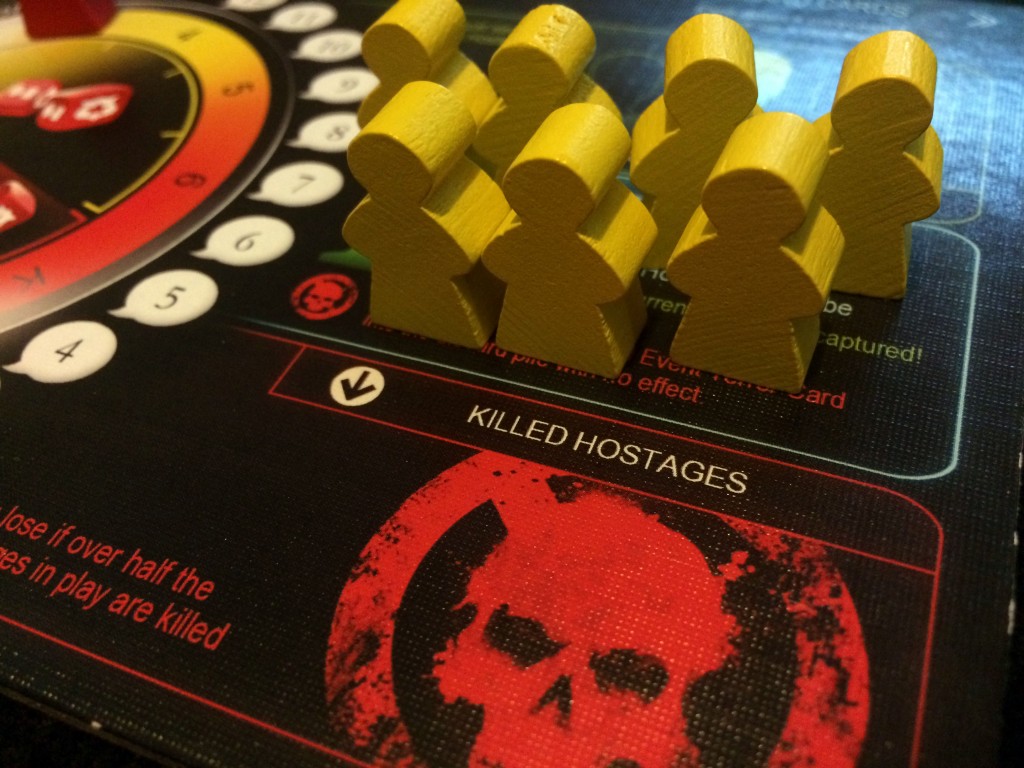 And if that wasn’t enough there are already four mini expansions that add some interesting new villains and introduce a handful of new mechanics to keep things fresh. 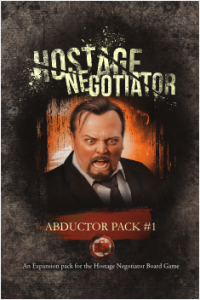 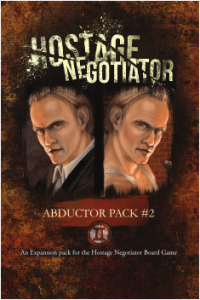 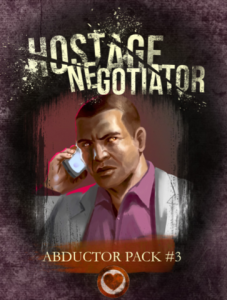 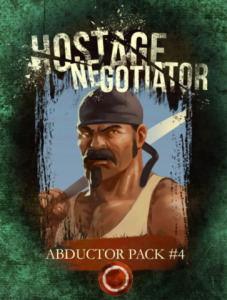 0 likes
Reviews
playing with ourselves