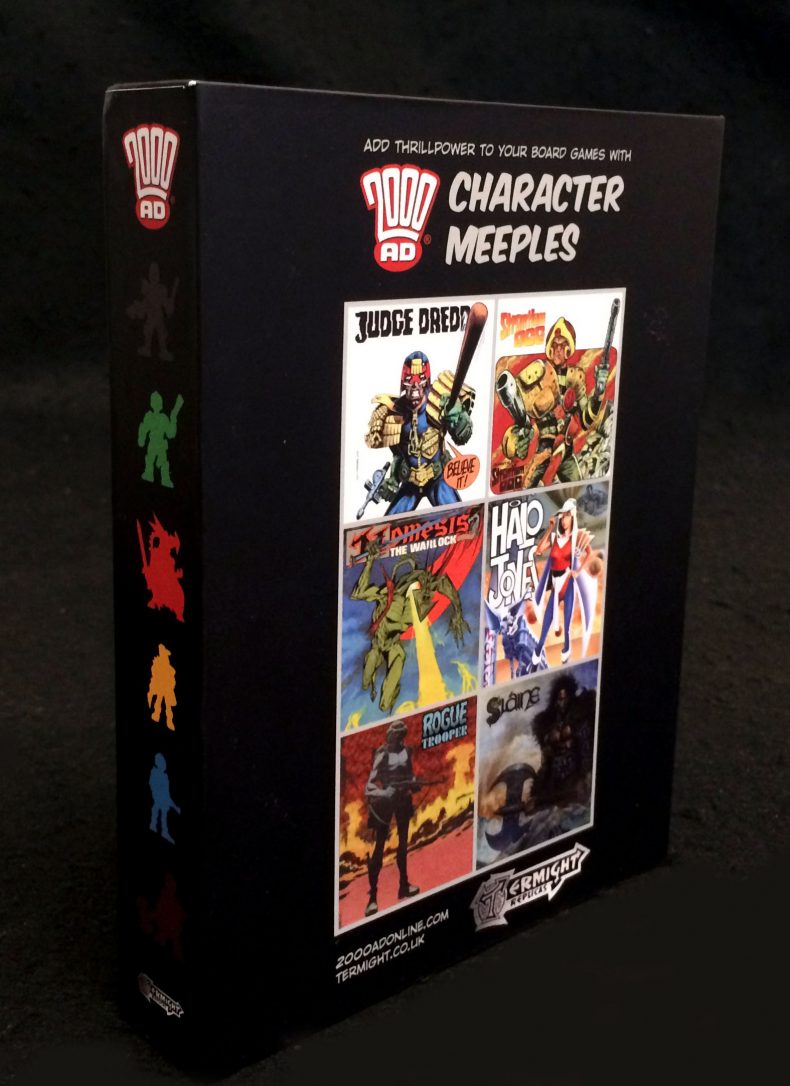 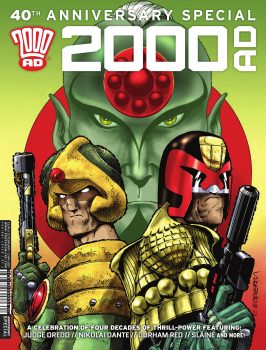 2000AD the “Galaxy’s Greatest Comic” turns 40 this year. During this genre-defining run, it’s been influential in not just changing the face of British comics but across the world. Numerous superstar writers and artists took their first faltering steps under the stern but steady hand of Tharg going on to produce the definitive works on some of the biggest characters in the industry.

I’m a lifetime reader of the comic through its many ups and downs and whether it’s Joe Dredd and his granite hard scowl dispensing near fascist justice on the beleaguered citizens of the future the eponymous Halo Jones and her quest to step out and see the galaxy or time travelling mutant bounty hunter Johnny Alpha kidnapping Hitler there has never been a dull moment. And its weekly dose of wanton violence and satirical and openly subversive swipes at racism politics and societies ills sure made a refreshing change of pace from the Beano for this young whipper snapper.

So imagine my joy when Termight Replicas approached me with the opportunity to review their new range of meeples based on six of the comics most iconic characters. We tend not to review many accessories despite the growing popularity in pimping out of board games it’s a blossoming hobby all its own, just take a look at those lavish crates that Stonemaier games have been putting out. 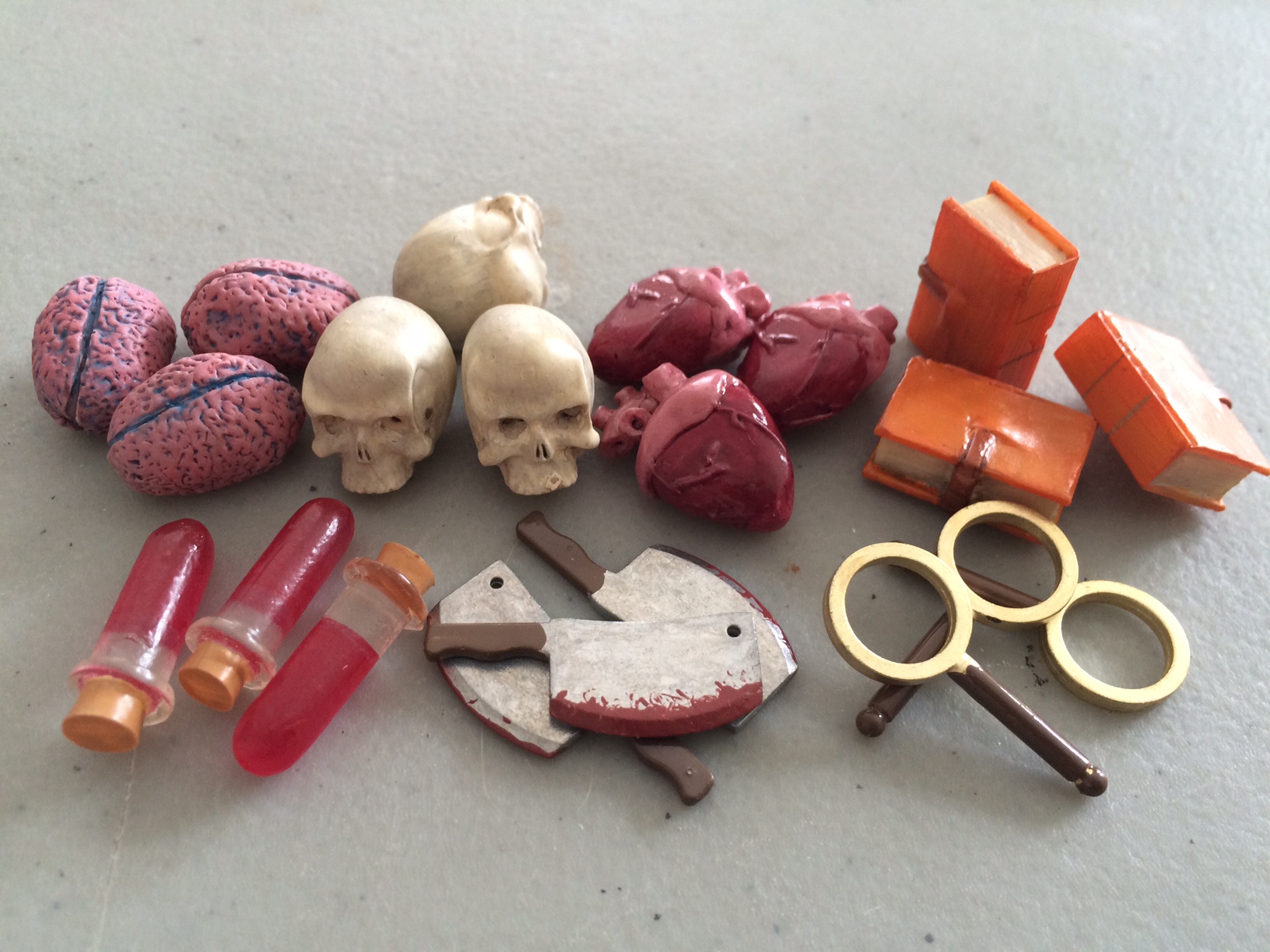 So if we’re going to take a dive into this brave new world, where better than with some thrill-powered extras. 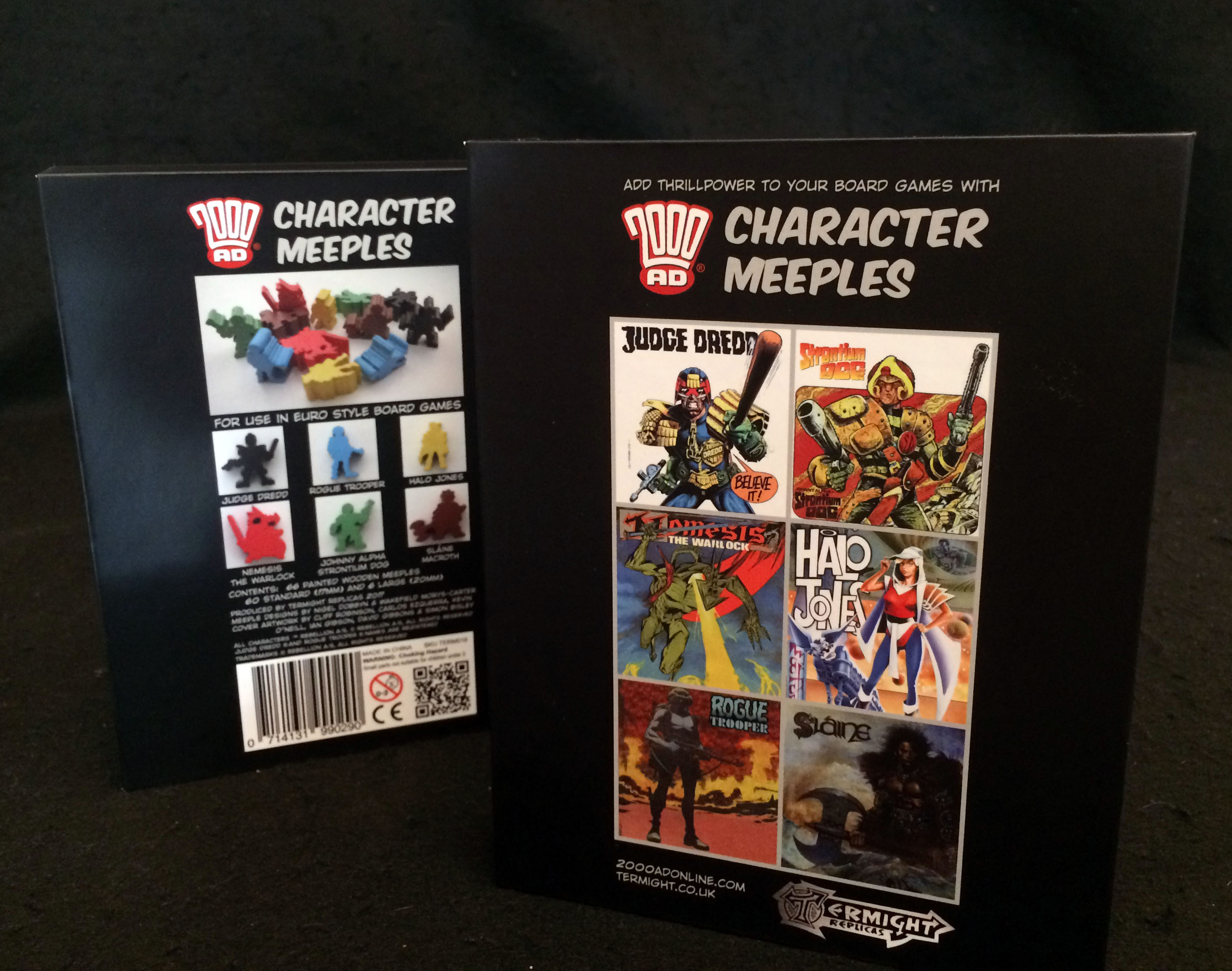 Coming in a smartly designed box that wouldn’t look out of place alongside your collection of progs this is a product created with the attention to detail that only comes from a true fan.
My supplied review copy isn’t the final version as that will include a full-colour insert with trays to store each of the characters doing away with all that clumsy baggie business. The box front is emblazoned with a montage of classic covers featuring these beloved characters brought to life from the pens of some of the most respected artists to have worked on them Dave Gibbons, Carlos Ezquerra, Kevin O’Neil, Ian Gibson, Cliff Robinson and Simon Bisley. 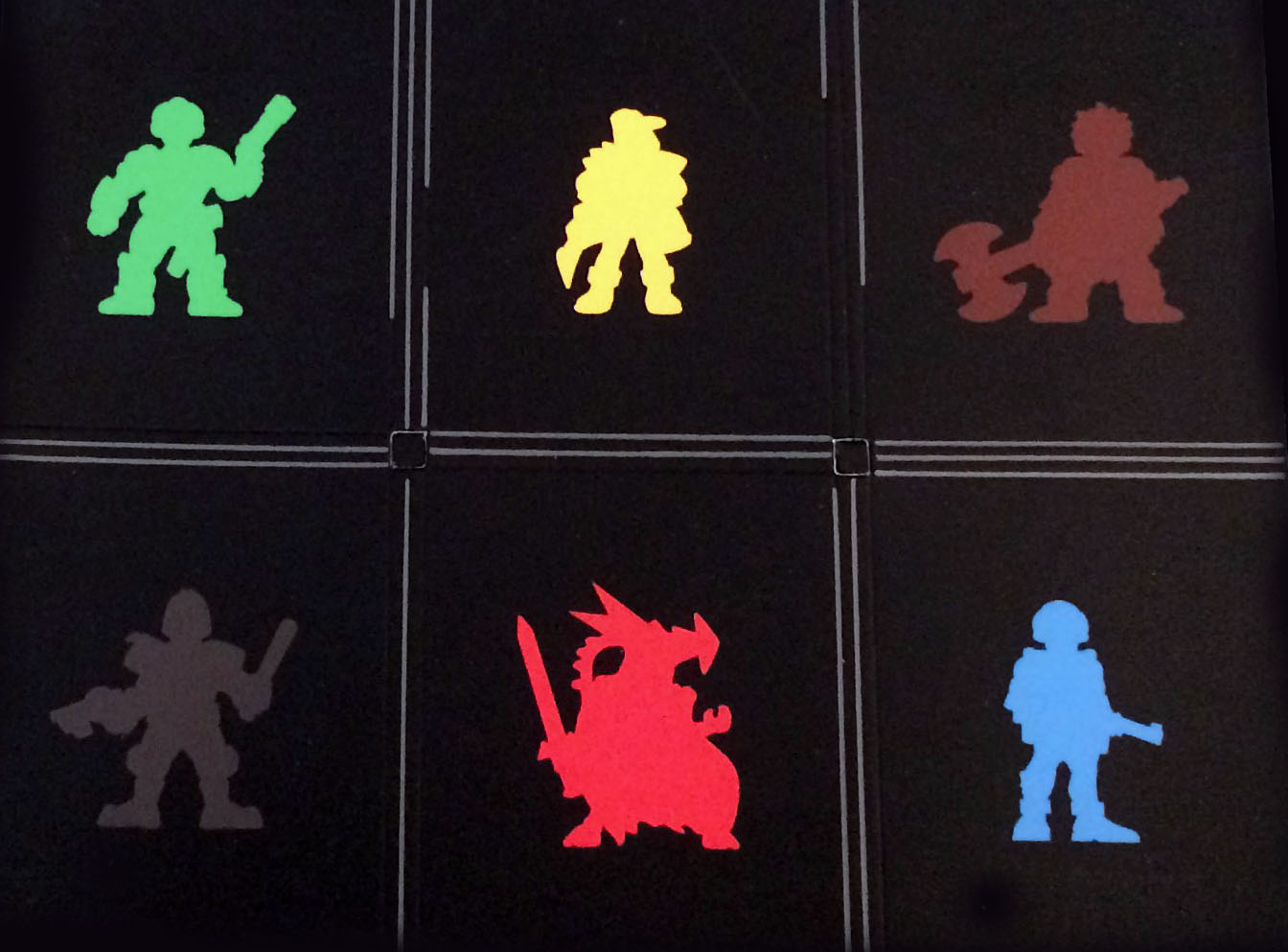 So let’s move onto these meeples then. what you get in the box is 10 each of regular meeple sized characters and 1 larger version that could be used as a turn marker or for score tracking.

And kudos to Termight each design is an instantly recognisable facsimile of their four colour counterparts as you shall now see for yourself. 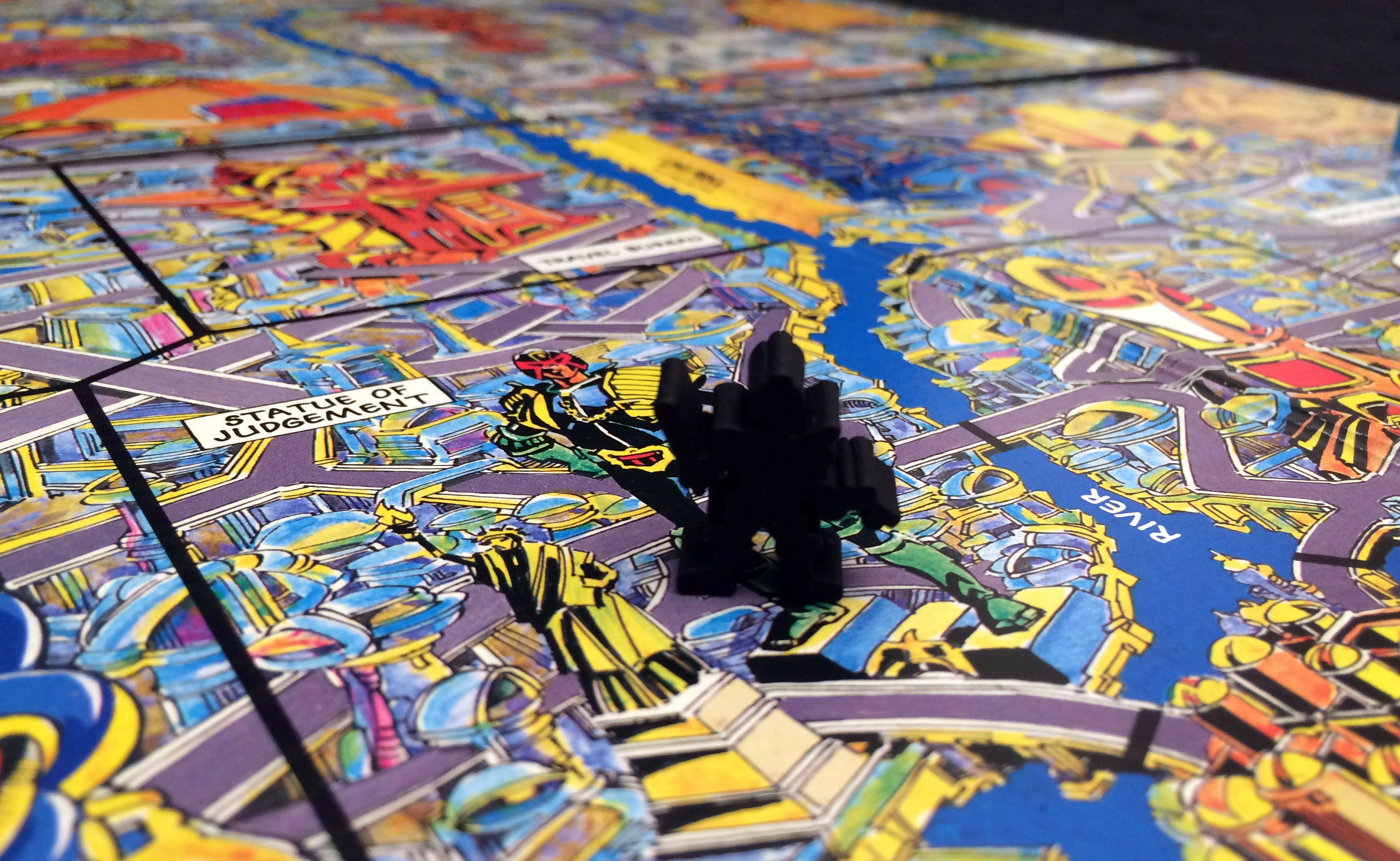 There’s the imposing figure of ole stony face himself Judge Dread representing the black meeple (my gaming colour of choice) brandishing his trusty nightstick and lawgiver. Looking ready to dispense some rough justice. 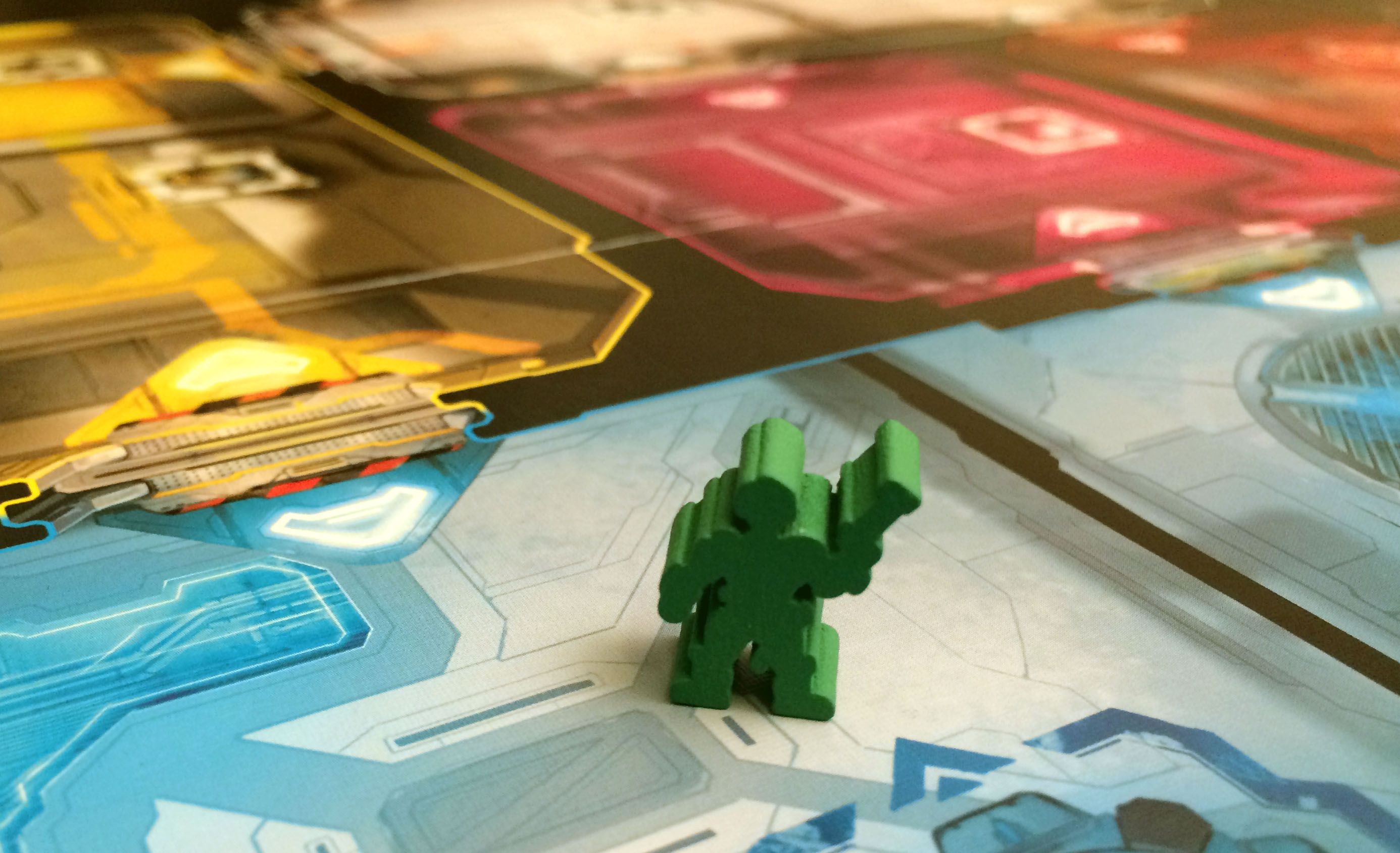 Johnny Alpha is in the green corner with his distinctive helmet and blaster and even as a meeple he’s still one of the comics coolest creations. 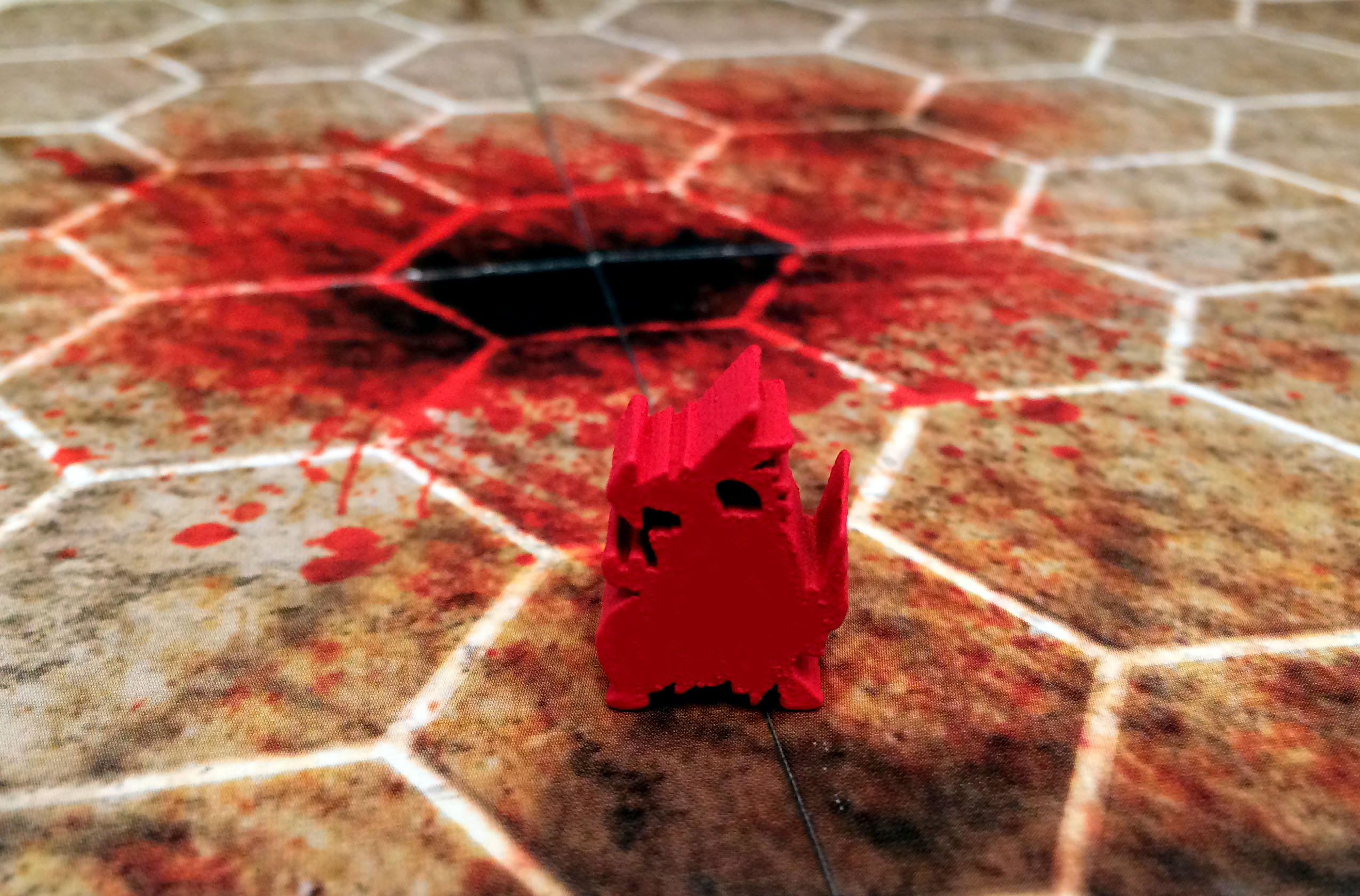 Red is the unmistakable silhouette of Nemesis the warlock complete with cloven hooves and the sword sinister. 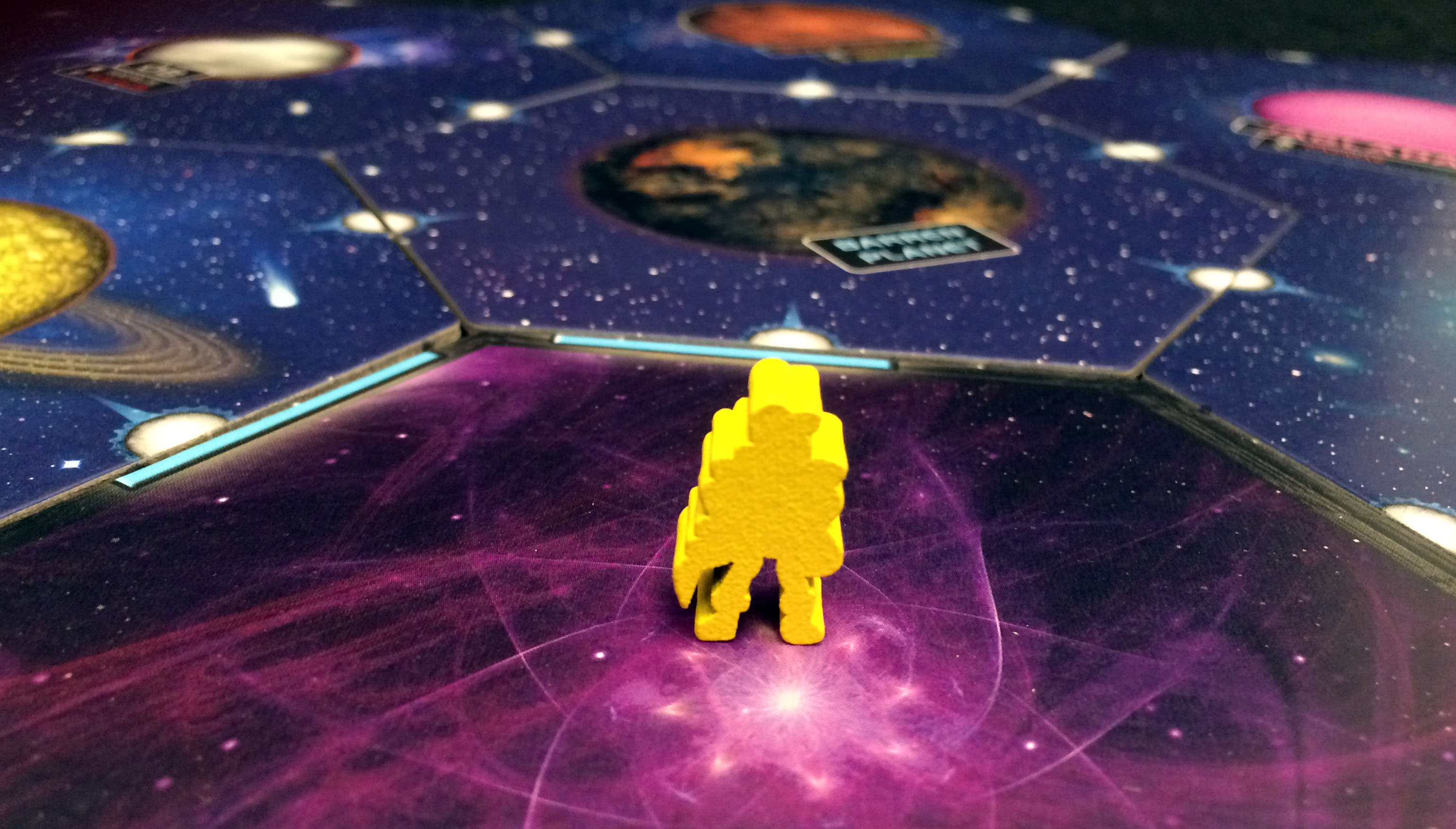 Yellow is Halo Jones Alan Moore’s unfinished masterpiece and the comics most famous heroine all ready to stake her place in whatever galaxy you add her. 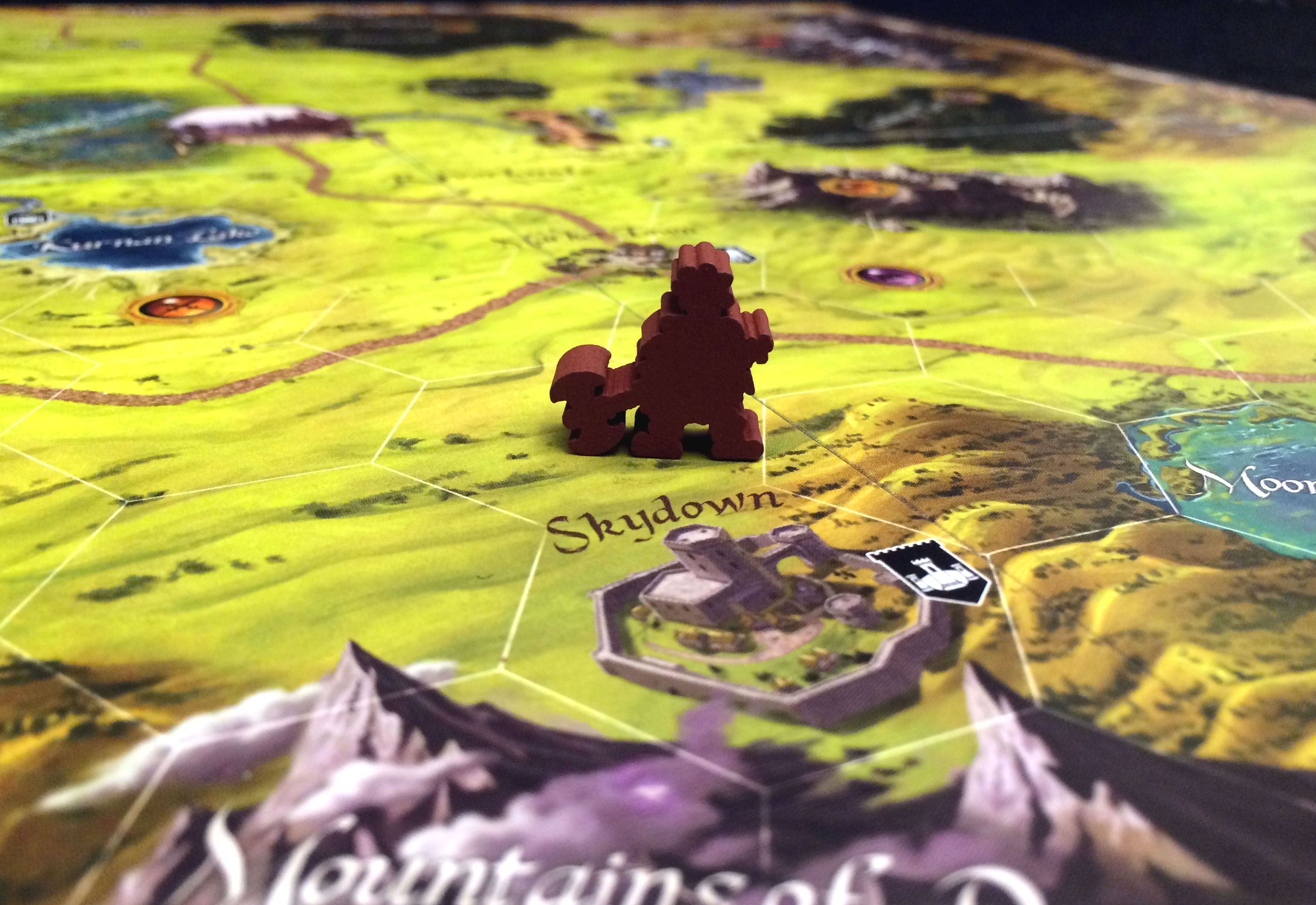 Brown is the brutish presence of Pat Mills wild and deadly barbarian Slaine complete with his favourite violent accessory his axe Brainbiter. 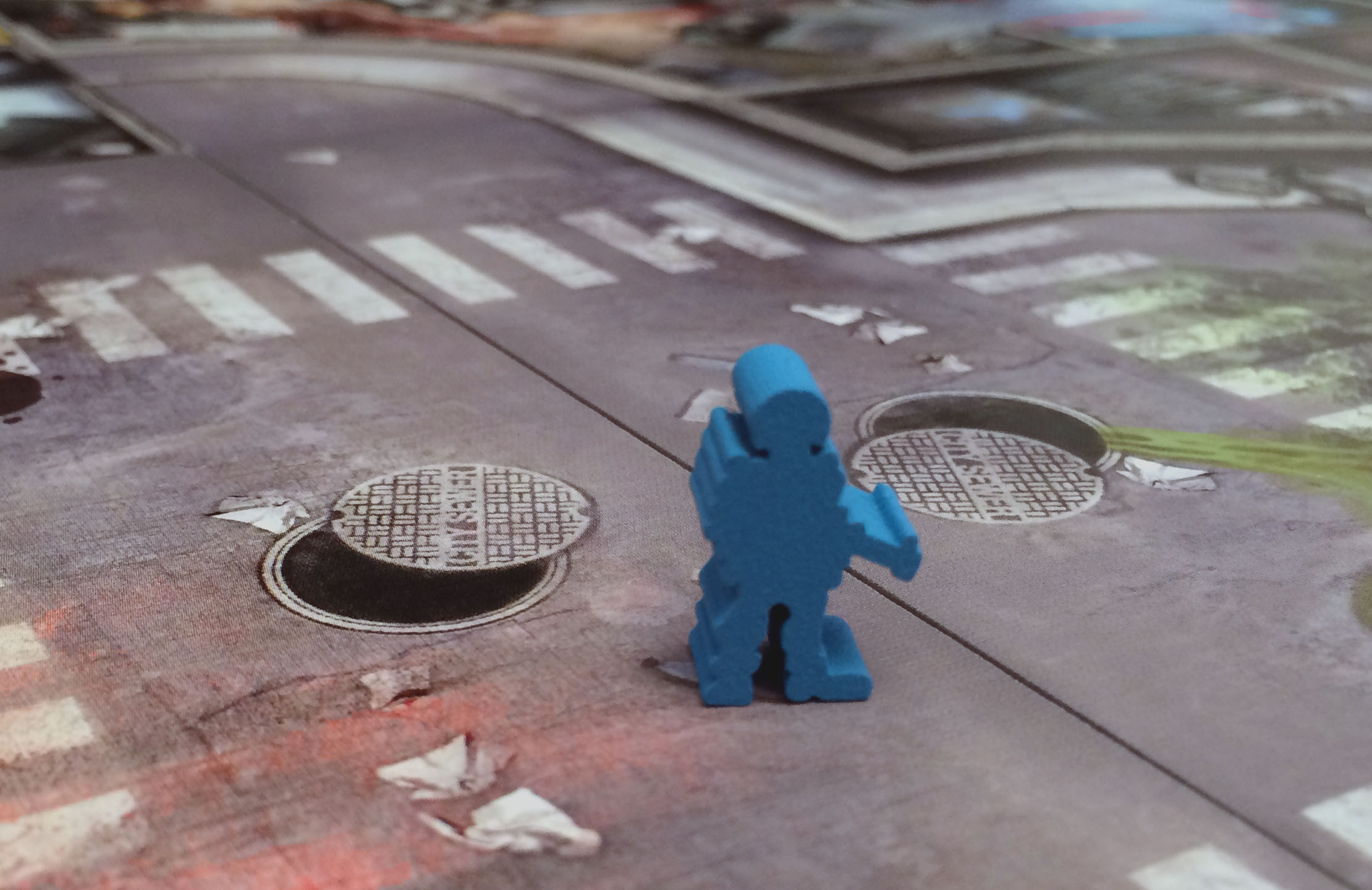 Blue, of course, had to be Rogue Trooper the last surviving clone in the never ending future war on nu earth. Complete with biochipped equipment from his fallen comrades.

So who are these for? The collector certainly as the price point puts them above your rank and file wooden game accessory but what else are you going to spend all those galactic groats on. This is a Zarjaz product each Meeple’s packed with sharply defined detail and will certainly call attention to themselves amongst any gathered earthlings. You can pre-order your set now by heading to the Termight Replicas store.

For the Squaxx dek Thargo’s amongst us these represent the golden age of 2000AD, and just owning them is a great addition to any collection. Hopefully, some smart thinking designer droid will develop a game for these guys to really feel at home in.
One thing for certain my games of Carcassonne have suddenly developed a far more interesting theme.