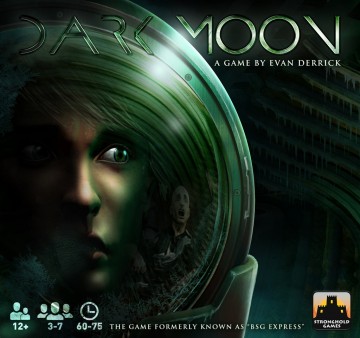 Fast play time, get your Battlestar fix in an hour.
Quick to set up, quick to teach.

despite its best efforts the theme is bulldozed in favor of the mechanics.
Feels a little pricey for what this is.
Inexperienced players may struggle in the infected role the first couple of plays.

If you're in the market for a shot glass hit of traitorous fun then this delivers that in spades, whilst it doesn't have the thematic heft of its bigger cousins what it does do is deliver that tense roller-coaster ride of uncertainly and distrust but in a fraction of the playing time of the bigger games.

Hidden traitor games. For me, they are one of my most absolute favorite game mechanics introduced in this modern age of board gaming. The frenzied levels of finger pointing loud proclamations of distrust and the general level of tension these can instill among a group of dear friends over a dining table are fantastic.

There are many notable names in this genre, but probably the most revered for capturing this mechanic so completely and enveloping it in a theme is Fantasy Flights Battlestar Galactica. I can recount some epic games of arch betrayals and accusations of innocent parties leading to nerve-wrangling denouements its a game that has never left me unsatisfied. Playing time is the barrier to entry, running into the bum numbing four-hour mark it’s not getting to the table often and it’s a faint inducing prospect to a muggle. 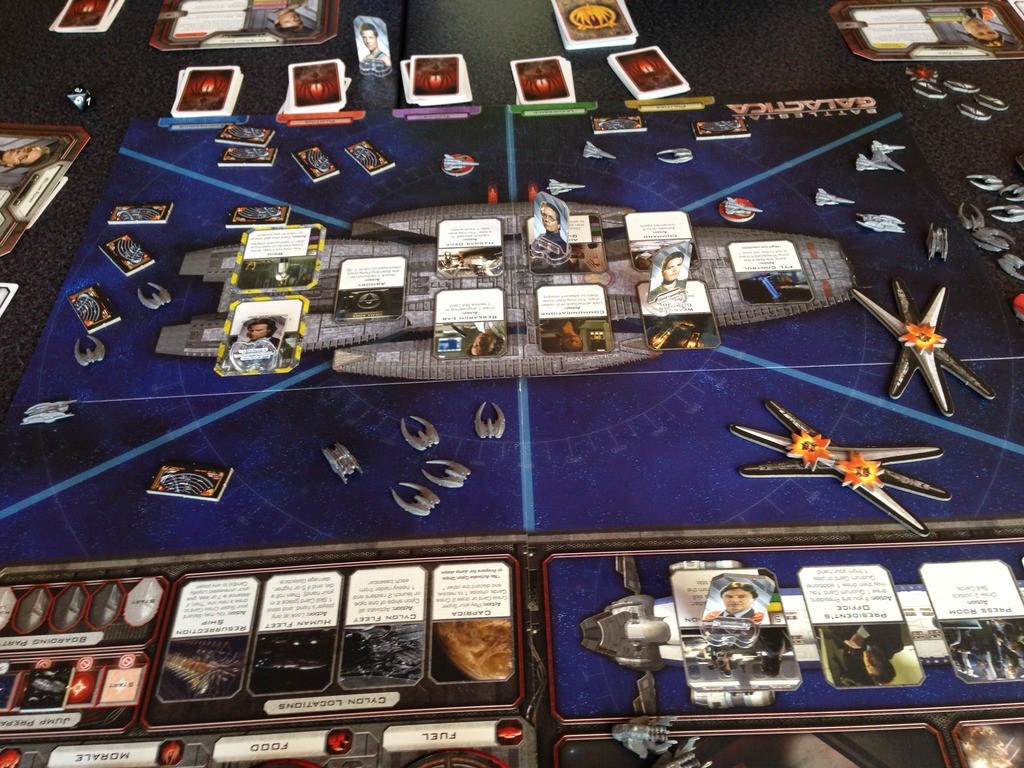 All of that rambling leads us to Stronghold Games Dark Moon. This is itself a re-imagining and tweaking of one of BGG’s most downloaded print and play games BSG Express, you’ll also note this is lauded to on the box of Dark Moon with a completely superfluous subtitle. BSG Express is a condensed version of the bigger thematic game streamlined into a set of rules that allowed players to enjoy the traitorous shenanigans but in under an hour. As a disclaimer before we dig any further I have never played the original express, the whole process of PNP is great in concept but can be a costly and labor intensive process that I’m far too lazy to partake in.

Dark Moon plucks from the Dead Space franchise and The Thing setting its story in a mining facility on Titan the Dark Moon of Saturn. With the usual reckless abandon, a bunch of sci-fi roughnecks have stupidly released a virulent alien infection. The unlucky recipients have gone bug nuts and set about killing their comrades and sabotaging the facility’s life support systems. The game starts with the remaining survivors awaiting rescue and attempting to stem the tide of chaos. Unfortunately, some of their numbers have become infected, so it’s about to be a rough couple of days ahead. 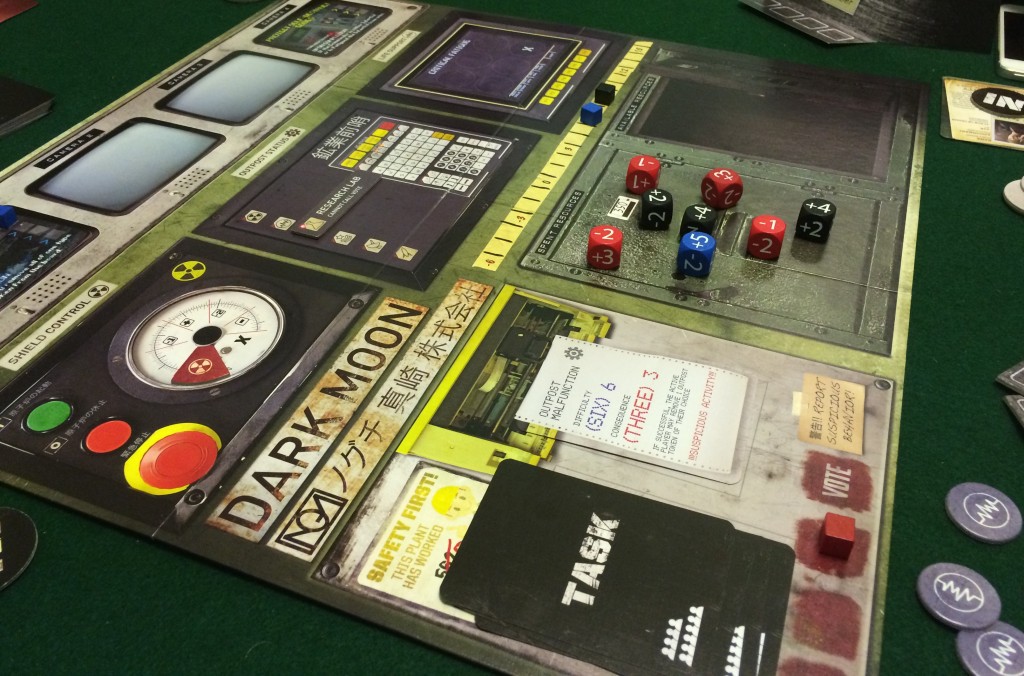 The story and theming are the one area the game develops a wobble. Despite its best efforts to set the scene complete with a board representing a grimy retro console straight out of one of Ridley Scott’s fever dreams, it never really feels like you’re in the colony. One reason for this is I think that the game is so turbocharged and mechanic lead that you don’t get time to smell the roses as you do in BSG’s much more thematically bloated predecessor. I don’t even think it’s particularly a fault of any of the workmanlike art or component design, I think it’s inherently an issue with how the game plays and the speed in which it progresses. And truth be told I can handle that, it just would have been even cooler had I been immersed in this world. Fortunately everyone gets so caught up in finger pointing and distrusting their comrades that you barely notice its absence until after its all over. It is a shame as if this had managed to evoke something like the movie Event Horizon complete with some gnarly art this could well have been something amazing. 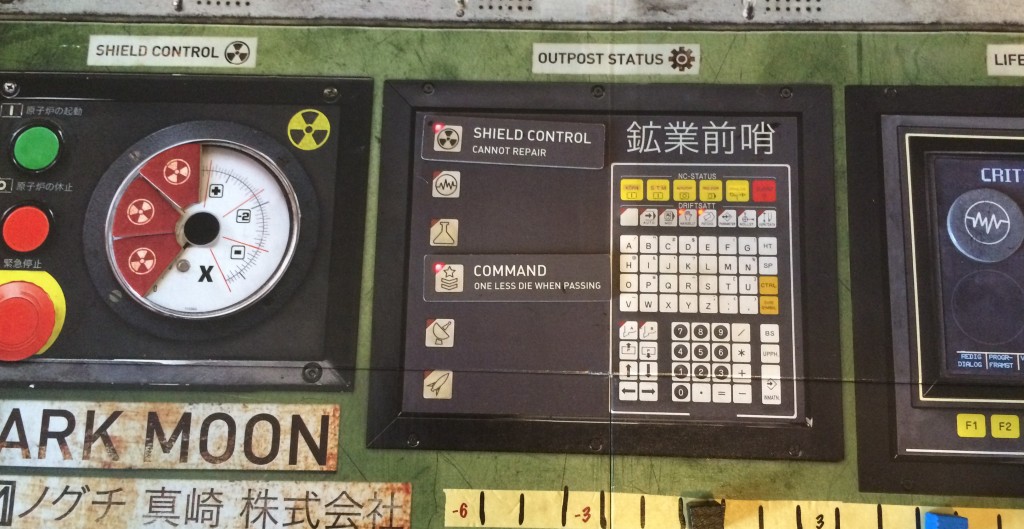 OK right that’s enough of the bashing but I thought we’d get that out the way because everything else in here works beautifully, the design and mechanics are tight as a snare drum and very easy to set up and explain even to those new to this type of thing. On the station, there are three main areas The Shields, Control Console, and Life Support. If any of these areas completely fills up with damage tokens then it’s game over, the infected players then get to high five tentacles and plan their domination of the star system. In addition to keeping the colony ticking over and everyone breathing there are also four events these are progressed by successfully completing tasks whereupon a new event is added until all four are complete and then the good guys have saved the day and much whooping and hollering can take place.

Player’s get the choice of attempting 1 of a selection of actions each turn. Repairing one of the stations life-giving systems by secretly rolling their dice and submitting any with a positive face to fix something. And to be clear this isn’t an option, you have to submit a dice. Now that’s all well and good but here’s the rub. The two styles of dice are Black and Red, only two faces on either of these hold a positive number. The Reds are weaker only offering at best a +3 or +1 while the black has +2 and +4 all other facings are negatives, so it’s very possible to roll all negatives. And of course submitting these fails will instantly attract the attention of the other players, was that deliberate? Are they infected?

Going Lone Wolf is an option, basically a chance to go all Billy brass balls and roll three dice, and if they can get two positives, then they advance the current event. Maybe you could Call for a vote? If an unfortunate soul is deemed infected then its off to quarantine with them, this comes with a couple of ramifications. Their dice pool is halved, and they can no longer repair anything or go, Lone Wolf. If they are infected, then they can also no longer reveal themselves as such to get the perks from their infection card. So locking up a bad guy is great but you shut an innocent crew member away, and you’ve severely reduced the capacity to deal with any disasters that will occur.

The remaining options are to issue an order to another player allowing them to either retrieve two dice or take two of the above actions or to reveal themselves as one of the infected. After that, they trigger their infection card (if not in quarantine) roll a dice and if they get a positive they can repeat the action. The damage caused will be to one of the stations terminals and if timed correctly could win the game or at least severely hamper proceedings. Once outed the infected’s actions revert to screwing one thing up a turn. Timing of when to appear on the scene is crucial as while some of the actions are quite powerful if the station isn’t in turmoil you’re faced with a struggle to derail a close knit team.

Once a player has completed their action of choice then the second stage is to complete a task. They draw two cards from the deck and choose one to play, obviously some of these are nastier than others and nobody knows what the task they discarded was, I’m looking at you the infected player at the back. These come in two main flavors either a malfunction that will set a difficulty number that the whole team can attempt to contribute to resolve, fail and bad things will befall one area on the station. The other cards are spicier options that mess with players, getting the option to look at infection cards or take dice. All of them have choices, and anyone refusing them instantly casts a question over their loyalty as well as further damaging the station. 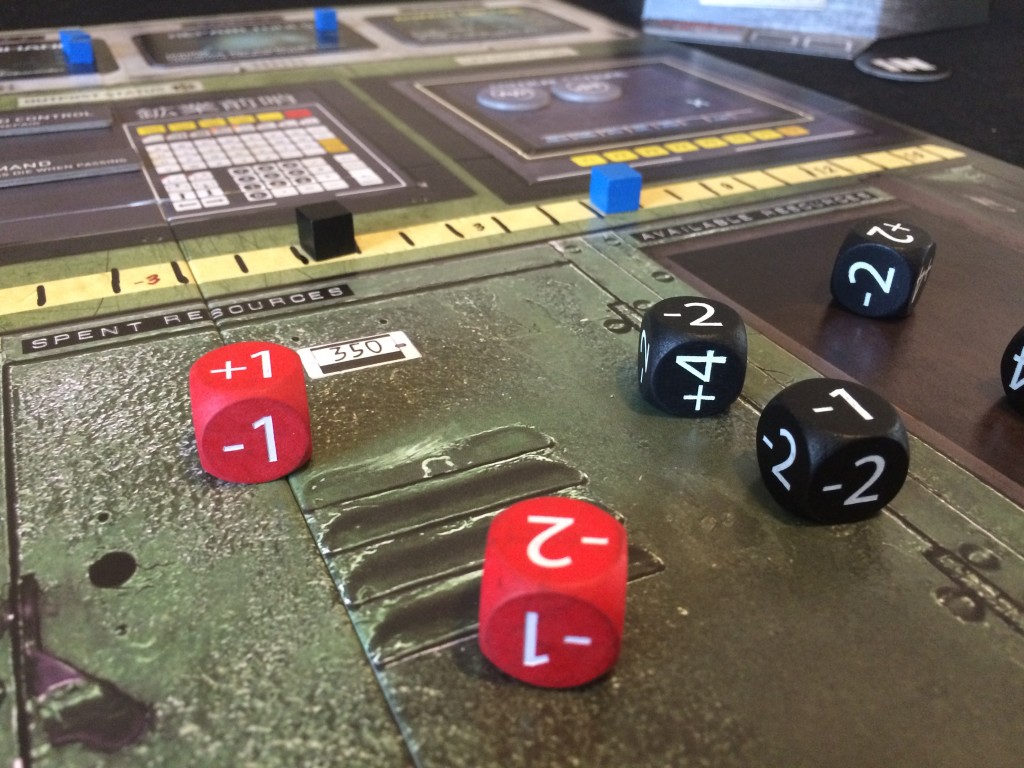 What these relatively light rules do is give a sandbox with which everyone sits in trying to resolve the various dilemmas that befall the station while trying not to draw attention to themselves. It’s those dice, those bloody dice easily coming runner up in the most bastard evil dice awards just short of Dead of Winters Exposure Die. Even the most well-intentioned players actions will often appear highly dubious to the rest of the table. Your dice pool is also an interesting bit of accounting, the only times you retrieve dice are either at the start of your turn or if you pass on a task. The remaining time its a balancing act of judging whens a good time to use them. If you’ve spent them previously and then an important vote is called you can be powerless to act.

I will say that while the mechanics make this easy to get in front of beginners playing as an infected is a much tougher proposition than its bigger flashier brethren. With nothing hidden as who is submitting what dice to any event or task the infected need to play a really clever game. One misstep and they will be banged up in quarantine faster than you can shout Traitor and point, anyone not well versed with being a double crossing scum bag is going to struggle. The rules do come with some suggested variants to tweak proceedings if you find your games are two far weighed in the favor of either the infected or good guys. 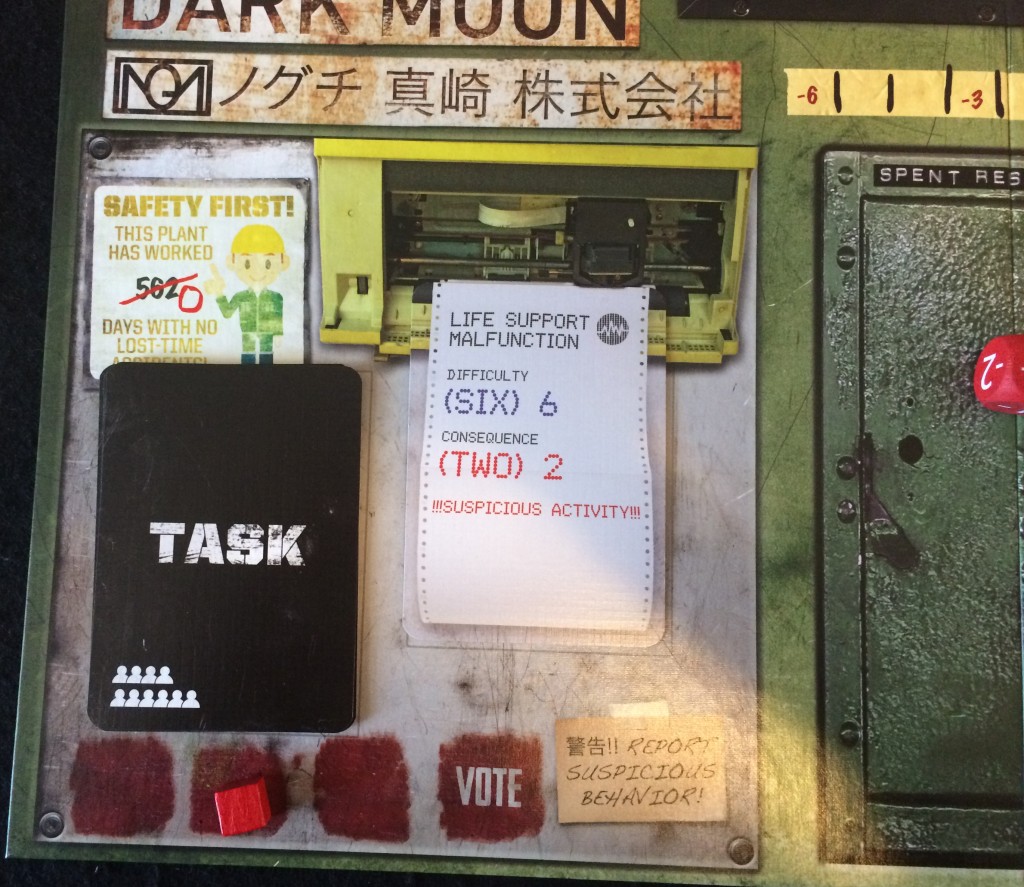 The sweet spot is probably six or more players then at least there are 2 infected in the mix. And most satisfyingly is that for once this plays within the time the box claims with games rattling along and rarely tipping far over that hour point. Now personally this does not replace either Battlestar or Dead of Winter both of those games have far more meat to them and those delicious thematic trappings. Dark Moon presents that same feel but in a vastly accelerated play time, this is better compared to something like The Resistance but for my money this offers far more player choices and option for deceit. If you approach this knowing, you’ll not going to be telling intricate yarns. But will still get that tensely strained nobody trusts anybody anymore feel of the big box games then you’re in for a great evening. I’m keeping this, it’s lean, and it can be nasty and it’s made it to the table multiple times since arriving because it offers that short, sharp bite of gameplay that I love. If you’re a fan of The Thing, then this is pretty much that game in a box and I can think of no higher praise than that to pour on any game.