About Who Dares Rolls.

Who Dares Rolls is a Southampton UK based home gaming group. Founded by Mike B, Ben Hendy, Rob Penn and Paul Dixon oh and group mascot Bob. The group originally got together in 2002 but this mainly involved watching stupid movies and playing Mario Party and Micro Machines incessantly.

The group split a few years later with some members becoming obsessed with WOW before slowly weaning themselves off and returning from Azeroth sometime in  2009. Looking for something else to entertain them they turned to board games with regular games of Risk, Lord Of The Rings Risk and more Risk (we may have played too much risk), Diplomacy (which Bob still to this day 5 years later holds grudges) they turned to that pile of dusty unused games in 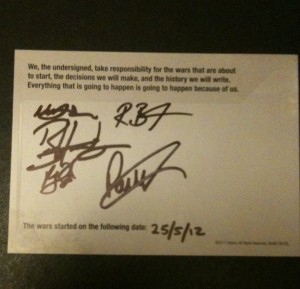 This would bring us to 2012 a huge event in our little groups journey to board game nirvana and the arrival of Risk Legacy into their lives. This was the turning point for the boys and their eyes were open to this new and shiny world of board gaming in the 21st century. The rest as they say is history.

We are dedicated to sharing to the world our love of board games in their varied and many colors. And the fantastic and friendly industry that surrounds this amazing hobby.

“Never bored of the board”

Drop by the  BGG Guild

Show us some love on Board Game Links