Really! you're looking for negatives... Well it rattles in my bag all the time and occasionally I forget I have it and think I've got mints and then get disappointed. Happy?

Its 6 games for 6 quid, that's a pound a game, you essentially get the tin and dice for free!

The UK Games EXPO has over the years introduced me to many amazing experiences and people, but all of this accumulated gaming joy pales into insignificance to the one part of the EXPO that I always need to visit, the Hopwood Games stand.  Seemingly always nestled in the same spot every year, off the beaten path round the corner and past the big fern (lovely girl) through the mop cupboard and just over the rainbow there it leans 2 parts Carney booth and 1 part Wonder Emporium. 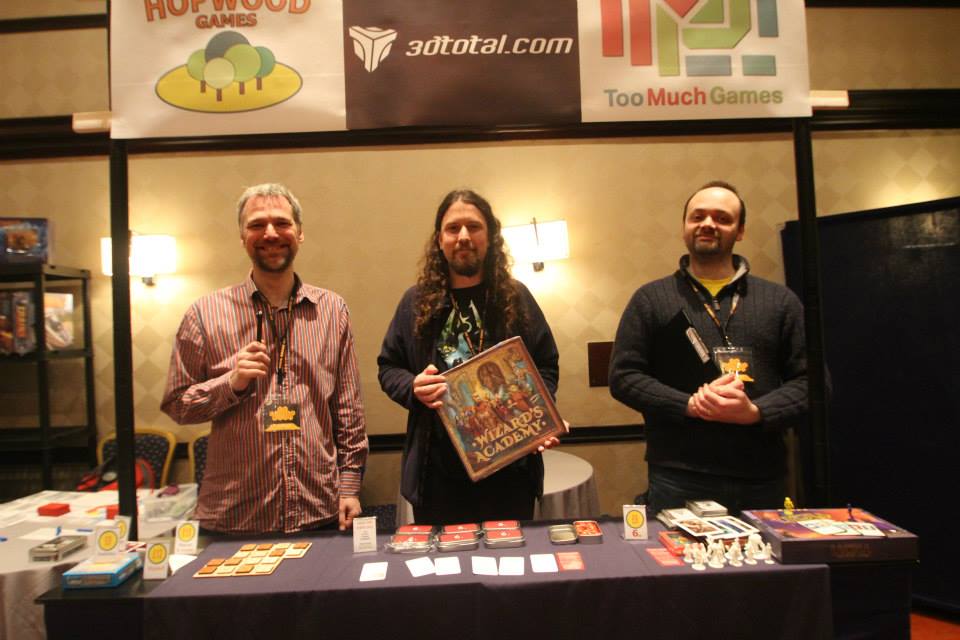 Every year without fail Andy is there with a new game and every year without fail I will part with my money to pick up whatever clever new little trinket he has fashioned with loving care over the previous twelve months, well this year I had a bit of a surprise. Not only was Andy at his stall but he was joined by two other wonderful British designers Greg Carslaw and JP Treen, together they had pooled their designer noodles becoming a hive mind of game design possibility’s and from this worrying union they have fathered a new game, a little game… 6. 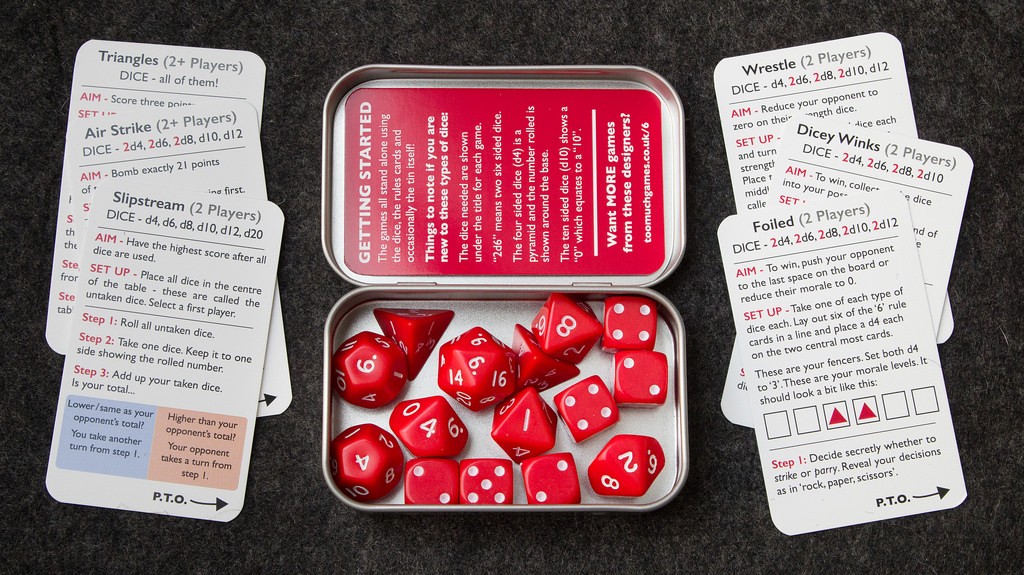 Starting with the design brief of these limited resources each of these mad gaming scientists went away into wherever it is that they assemble these things and each created 2 games using the sparse components available.

I’ve taken this tin everywhere with me since picking it up, its traveled alongside like a faithful obedient puppy always ready to please whether I fancied the push your luck tussle and rumble of Andy’s Wrestle, maybe JP’s Dicey Winks that see’s you indulging in some dice flicking dexterity and derring-do or the bidding and tactics of Greg’s Triangles, each of these games have offered something different from the others available whilst one and all being rewarding fun with the inevitability that we’d have to have another play. And if any of those fell flat then lucky for us as there’s another 3 games in the tin that do something else completely different.

In this world of bigger and flashier component festooned boxes offering worlds and wars and adventures 6 has come as a delightfully fun palette cleanser, it has the tactile joy of messing around with dice and tins and cards, some rewarding and solid decisions to be made and play time that can fit around you waiting for some golden browned toast or the tea to brew.

Look people its six great games, by three wonderful human beings and all for just £6. You can’t get lunch for that! So if you want a copy and why the hell wouldn’t you then head to HERE.

If you’re still not convinced then why not just listen to what the brains behind the gaming Goliath in a itty bitty tin had to say when I interviewed them at the recent EXPO.

And if that didn’t clear things up enough for you we also covered pretty much every question that has plagued scholars since the dawn of time.

Keep an eye on Toomuchgames, as promised the other designs that didn’t make it into the tin have started to appear on there. And here’s a challenge why not go away and come up with your own 6 game, let us know how you get on.