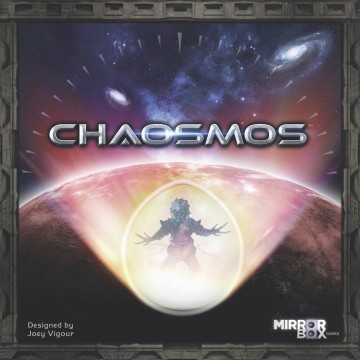 Brings lots of fresh ideas to the table.
A quick and easy to teach rule set.
A heap of quality components and doodads.

There's some clunkiness and fiddling about in those first few plays.
Whilst component quality is on the whole great I'd sleeve those cards.

The game is incredibly easy to grasp its simple rules and mechanics are the tie hook on which we can drape the multitude of human imperfections, our deceit and coveting of sacred items. If you are on the lookout for a engrossing but rules light experience with the chance to infuriate friends and family members then there's an awful lot of that in this box.

The backstory of Chaosmos sounds a little something like a coke addled 80’s movie producer could have concocted during a lunch time pitch meeting, it probably would have gone something like this. “These crazy looking aliens are tear-assing across the cosmos frantically searching for the Ovoid, this strange alien egg critter. You see the universe is about to implode and the only way to survive when it does, be holding the Ovoid!” So the Ovoid is the Maltese Falcon, Rosebud  or that strange glowing case in Pulp Fiction, its a Mcguffin it makes zero sense and its not supposed to, its sole purpose is for us to be able to enjoy the ride, and what a crazy ride this one is. 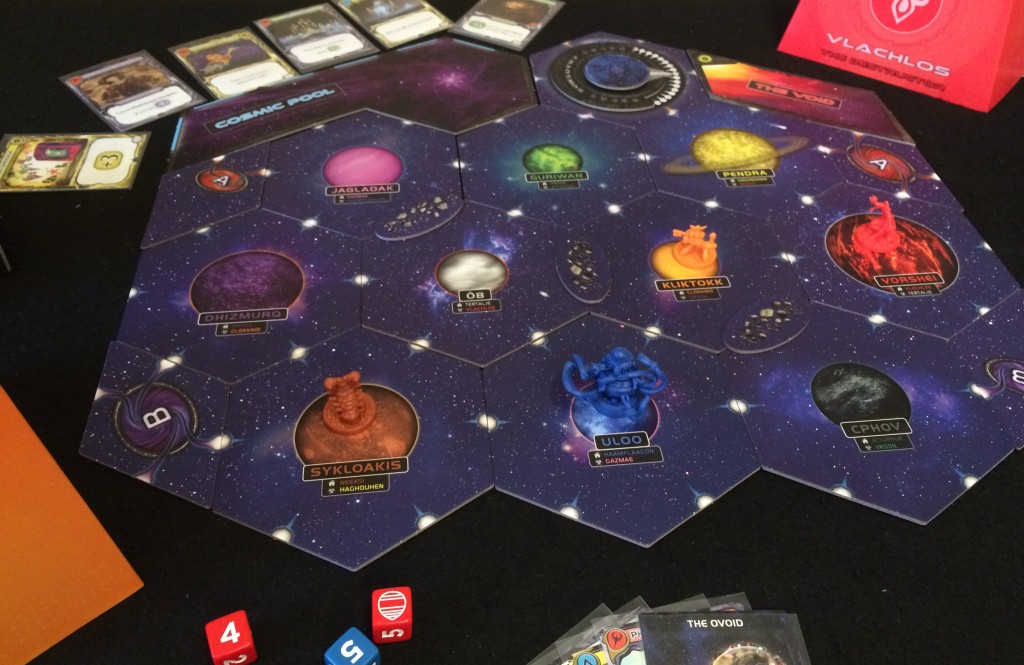 This game is a hugely entertaining mash up of social deduction, slight of hand, bluffing, deception and exploration all wrapped up in a brisk playtime with a rules set that can be taught to anyone in about five minutes. It’s the sign of a game and its designer who are spooning comfortably in their own little cuddle room happy with their lot in life, it also means its a game that can be quickly introduced to players both fresh to our hobby and old hats giving it some serious legs. 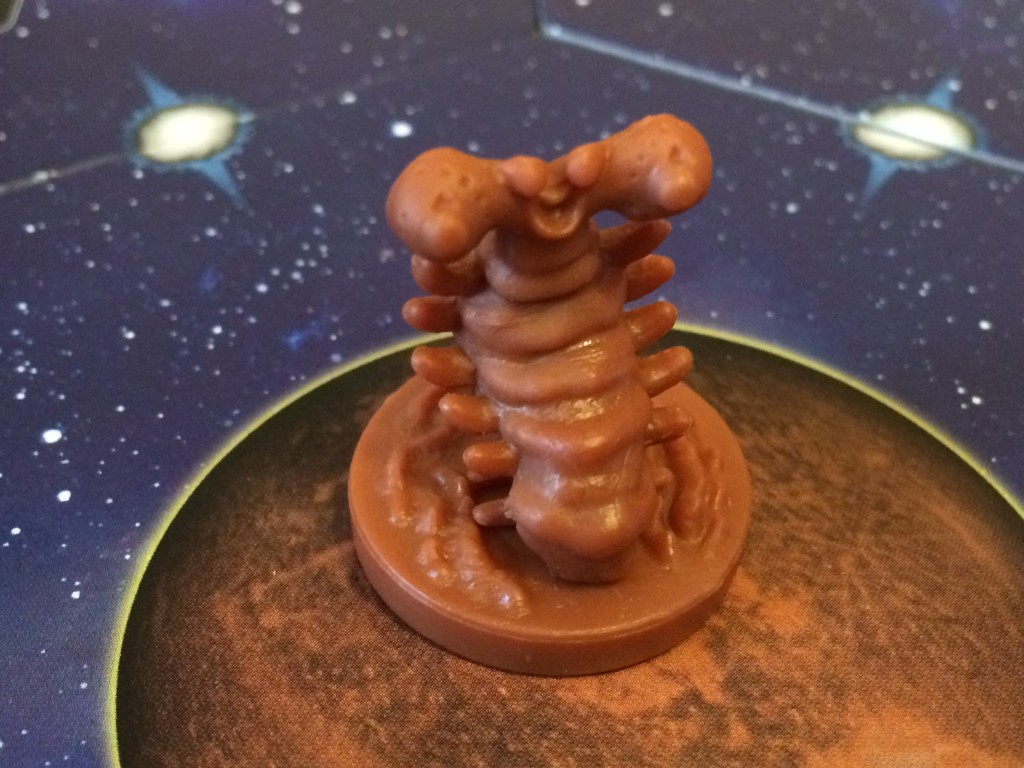 From the moment of opening the box and my first few plays I’ve been getting something of a Cosmic Encounter vibe, maybe its the assortment of crazy looking aliens with their asynchronous powers, or all that double dealing and morally dubious behavior that escalates throughout the game culminating in a final couple of rounds with a body count not normally seen outside of a Game of Thrones children’s party. Let me be be clear, Chaosmos and Cosmic Encounter are completely different games but somewhere in its gamey soup Chaosmos shares some key ingredients or at least the odd flavor enhancer with that classic, and I can easily see it appealing to fans of that fine old chap. 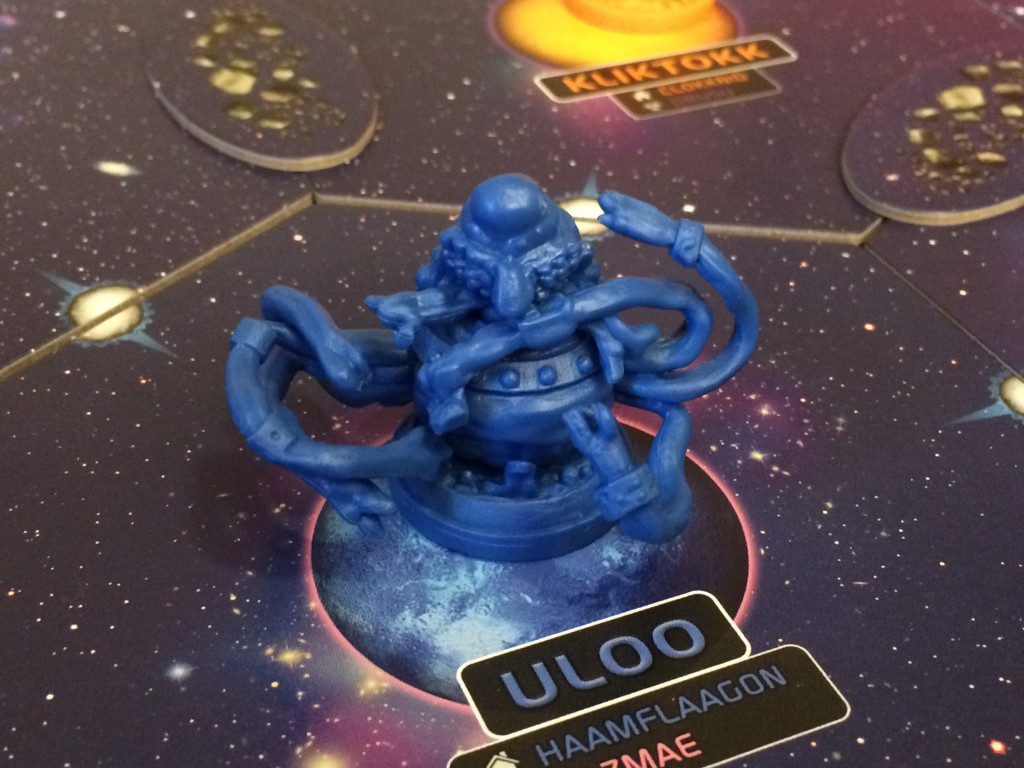 So this game is a race, sort of like its a mad mad mad galaxy as all the various aliens hot foot it around the nebula and planets seeking high and low for the legendary Ovoid. In a cool little bit of design each of the planets is represented by a card envelope and at the beginning of the game these are secretly loaded with random items, weapons, equipment and of course the Ovoid, everyone knows its out there, heck somebody might start the game with it, but at that early stage you don’t want it. Its helpful to know where it is and a clever player, a quick player, might conceal that ovoid in plain sight. 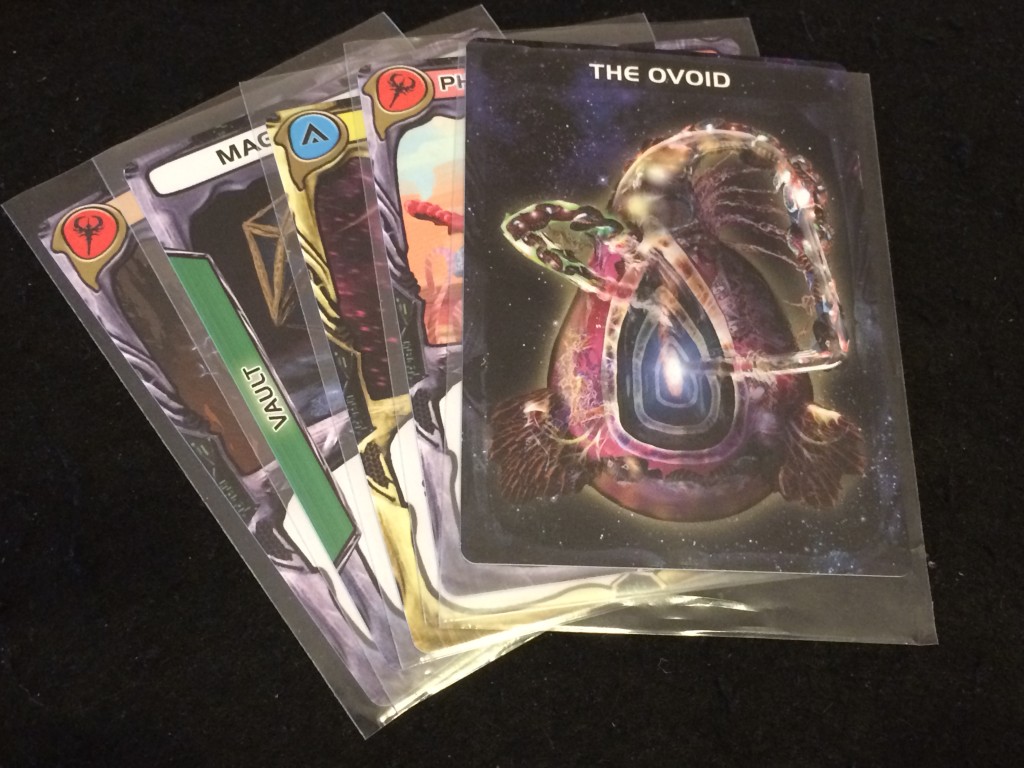 On your turn you get three actions that can be used in any way or order you wish from moving about the galaxy, to controlling planets which allow you to sneak looks inside those envelopes, you can secretly switch cards from your hand with they’re contents or maybe set a trap for some unsuspecting opponent, possibly even stash a precious item behind an impenetrable vault which only a key will access. You could of course forgo all of that bunk and just start a fight, this involves rolling two dice and comparing totals with players then using cards to modify the hit total to beat them. In a neat tweak not all cards are discarded and many are returned to players hands so its important to keep an eye on who is using what because you might want to find the equipment that deactivates those weapons giving you the advantage in a subsequent tussle. Winners get the choice of either banishing the loser to any planet or stealing a card from their hand also giving you the opportunity to see what else they have scurried away in their sweaty mits, this can be quite the power move in the latter stages of the game. 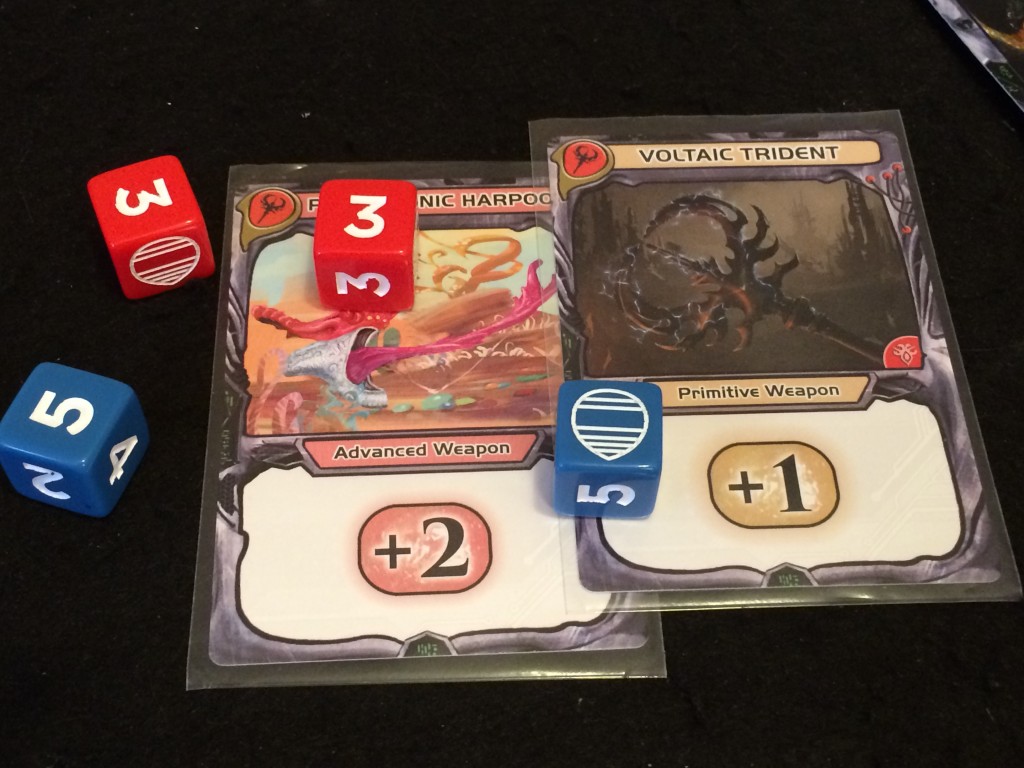 The rules and mechanics are light, far lighter than you might at first expect, its in the deduction, lying and cheating that takes place at the table where this game shines the strongest and acquires the much needed meat on its bones. Like others of its ilk requiring underhand tactics and secrecy Chaosmos excels with a group intent on deceiving and bluffing. And there’s no turtling here because that’s only going to draw the attentions of other players suspecting that you have something to hide. And we can’t go on much further without discussing the Chaos Clock this sits on the table looking all innocuous but at the end of every players turn it ticks down and while in the early stages of the game its easy to take for granted suspecting you have all the time in the universe to do what you need, very quickly it becomes clear that the universe is a bit knackered and  times running out, the game then enters the second stage or what I like to call “all out war” 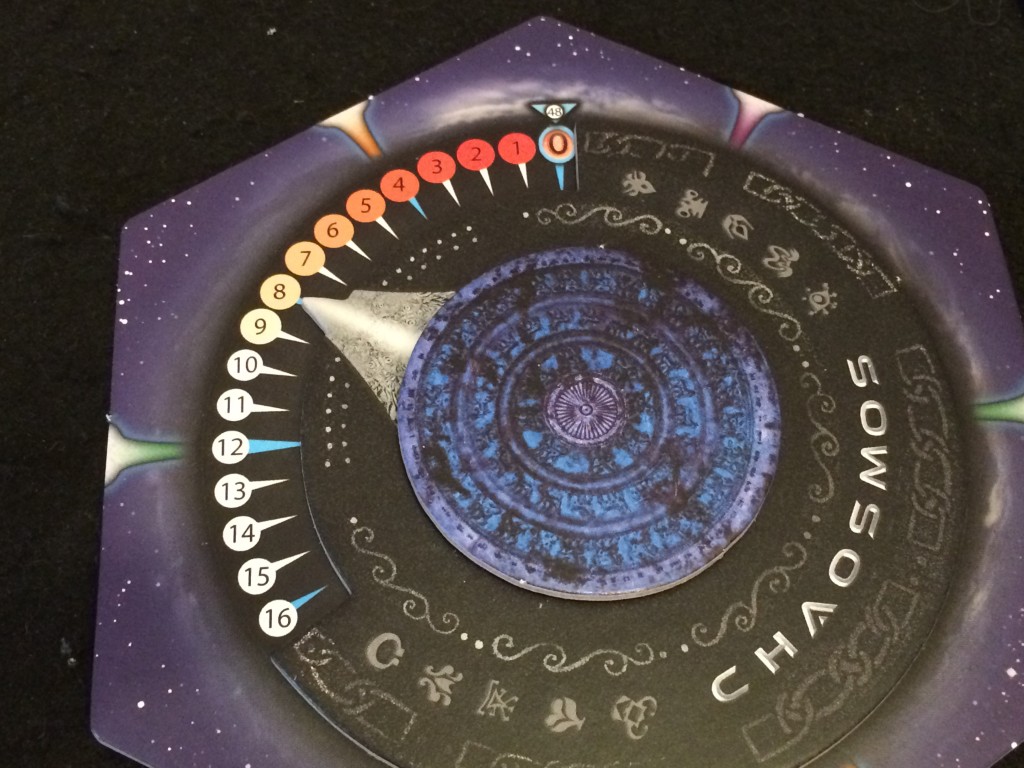 Its in these latter stages of the game with everyone at the table lying and bluffing that it suddenly becomes a frenzy when the ovoid is finally discovered, instantly igniting war with running battles occurring across the board involving everyone in a Benny Hill skit. Its hilarious to see a scuffle break out, some cards exchange hands and then one player hot foot it very quickly across the galaxy and you feel the eyes of every other alien greedily slide to that side of the table as they start causally heading that way without trying to look like they are.

There are some highly inventive and clever little pieces of equipment to aid in the fun, The Hypertube allows a player to send a face down card to any envelope. Did they just send the Ovoid over there or was it an attempt to distract, in the final stages of a game with time ticking down and a 50/50 decision of where it might be this is a nail biting and hilarious development. A power card in the final stages of the game is the Temporal Displacer which allows the user to move time forward up to 8 spaces anytime in the final 24 turns of the galaxy, hold that and the egg and you’ll in a winning position, that’s if you can keep hold of them. 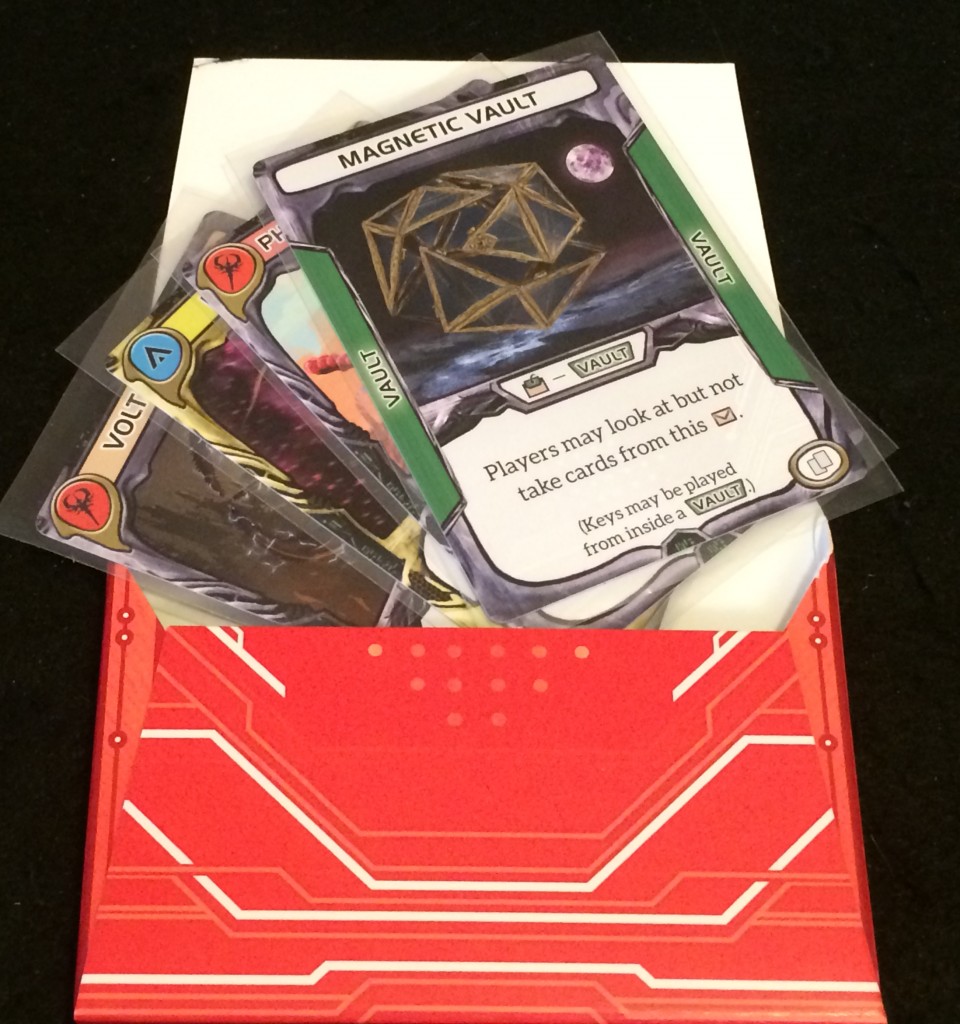 Components are nearly all top drawer, some of the alien sculpts are a mixed bag with a few lacking detail I’m looking at you yellow alien, and the cards are another concern, I never sleeve cards in my games, but this is a game i’m sleeving. with all the handling they are going to get in and out of envelopes etc, you’ll going to want to sleeve these (cannot believe I actually said that). There are a bunch of variant rules included in the box and once familiar with the basics I’d certainly recommend using the counterfeit Ovoid option, in this players are not just looking for the Ovoid but also to discern which of the two in the game is the genuine one, it cuts down on that early game crawl and forces players to really get moving about and searching and adds a delightful level of uncertainty as to whether you’re holding the true Ovoid. 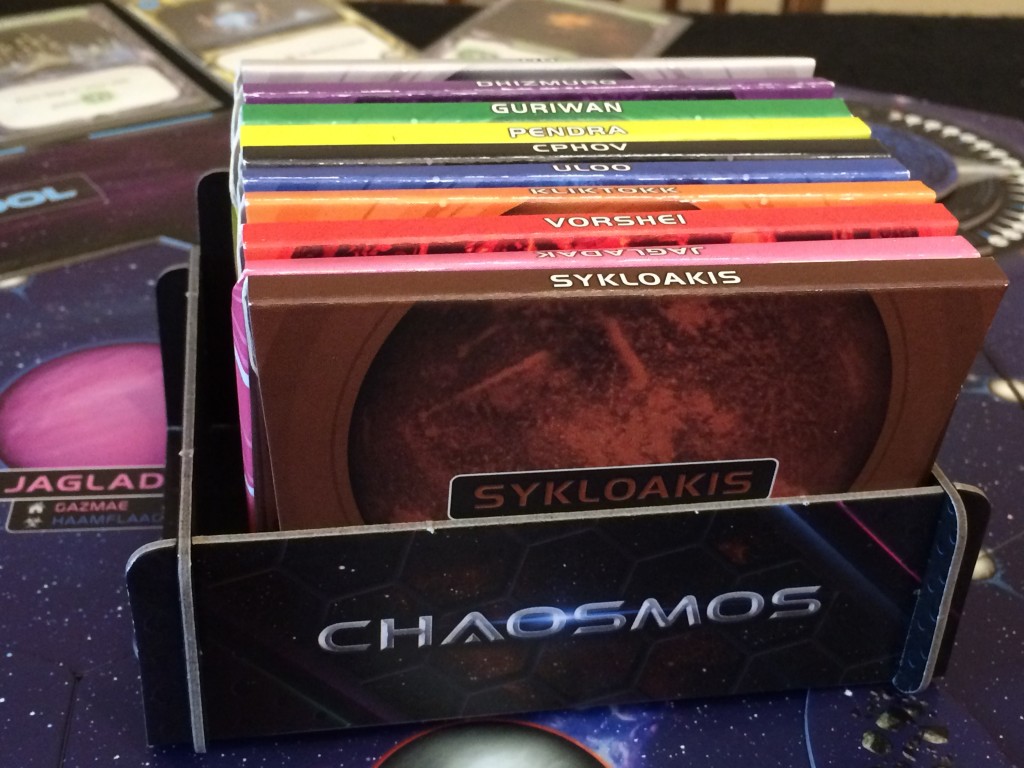 Now getting critical, which is what us reviewers are supposed to do then the biggest issues with the game is its initial clunkiness, the constant in and out of envelopes and fiddling about, the randomness of the combat (although I’d argue that there is ways of balancing that out with the card play) the slow crawl of the game’s early turns where everyone sort of wanders about looking a bit embarrassed like they just turned up at a formal cocktail party in a clown suit, and whilst the rules advise on 48 turns for a longer game 36 seems the sweet mark. Personally I find the strengths of what else that this game is doing right does outweigh these issues. Yes the game could have been streamlined it is overproduced, buried beneath all envelopes, mini’s and dice there’s a really cool deductive card game experience hiding out and I think that’s where this games kickstarter roots betray it, probably if produced by one of the big boys it would have been refined further but sometimes we have to love these things warts and all, its quirkiness is part of its character and I like to think of this as a cool Roger Corman cheesy sci-flick rather than a slick popcorn pleaser, whatever your thoughts the love bestowed on this thing is there to see. 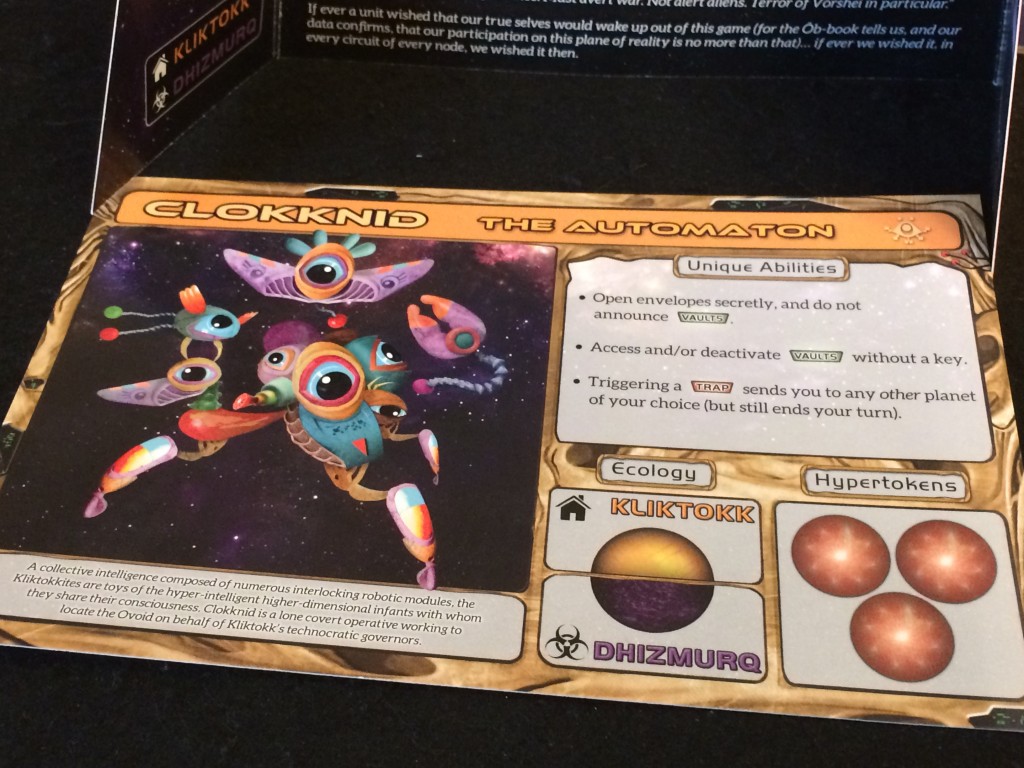 At its heart this is a light almost party game experience with just enough of a gamey veneer lacquered on top to make this stand out from the crowd, it has a abundance of interesting new ideas and implementations some of which don’t always quite work but it manages to create more than enough goodwill in the latter stages of the game to blot the slow awkwardness of those early few turns, and with return visits it continues to reward allowing for you to enjoy those slower moments for what they are, the preparation for the chaos to come.