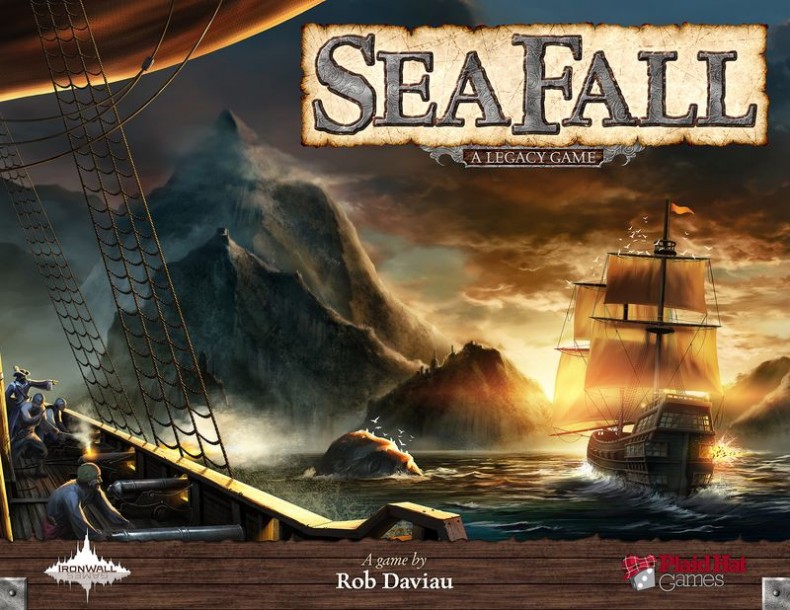 Its does deliver on its legacy title. There are oodles of things to open, unlock and write on.
There's a lot of game in the box.

SeaFall is a massively compromised experience. There is some enjoyment to be scraped out of it, whether the time investment required to see its campaign through to completion is worth that is open to debate.

I had such high hopes and expectations for what this game would deliver that I was willing it on to accomplish what I hoped it would. And to come to the crushing reality that it couldn't I think makes the sting of disappointment feel so much worse.

A warning to passing travellers for your safety contained below within the secret passages is a deeper look into our SeaFall experience. Be warned these rarely trodden paths are treacherous and filled with the most heinous spoilers…OK look if you don’t want your SeaFall campaign to be ruined don’t click the bloody things, just so we’re clear.

SeaFall was absolutely and unequivocally my most anticipated game since first teased by Rob Daviau some four years ago. I’d recently rekindled my board game love affair having just completed Risk Legacy and the prospect of another Legacy game especially one built from the ground up had me slathering in anticipation. The glace cherry on the top of this Hype Cake was Pandemic Legacy that had transformed a dry clinical experience into a gripping breakneck thriller that left us clamouring for more.

Skip forward to this past Friday and our campaign came to an abrupt close on its fourteenth game. Subsequently, I’ve been doing much soul searching following the emotional roller-coaster that is playing SeaFall, so this review comes at you as part therapy session where I will try to reconcile my differences and work out where this zigged when it should have zagged. 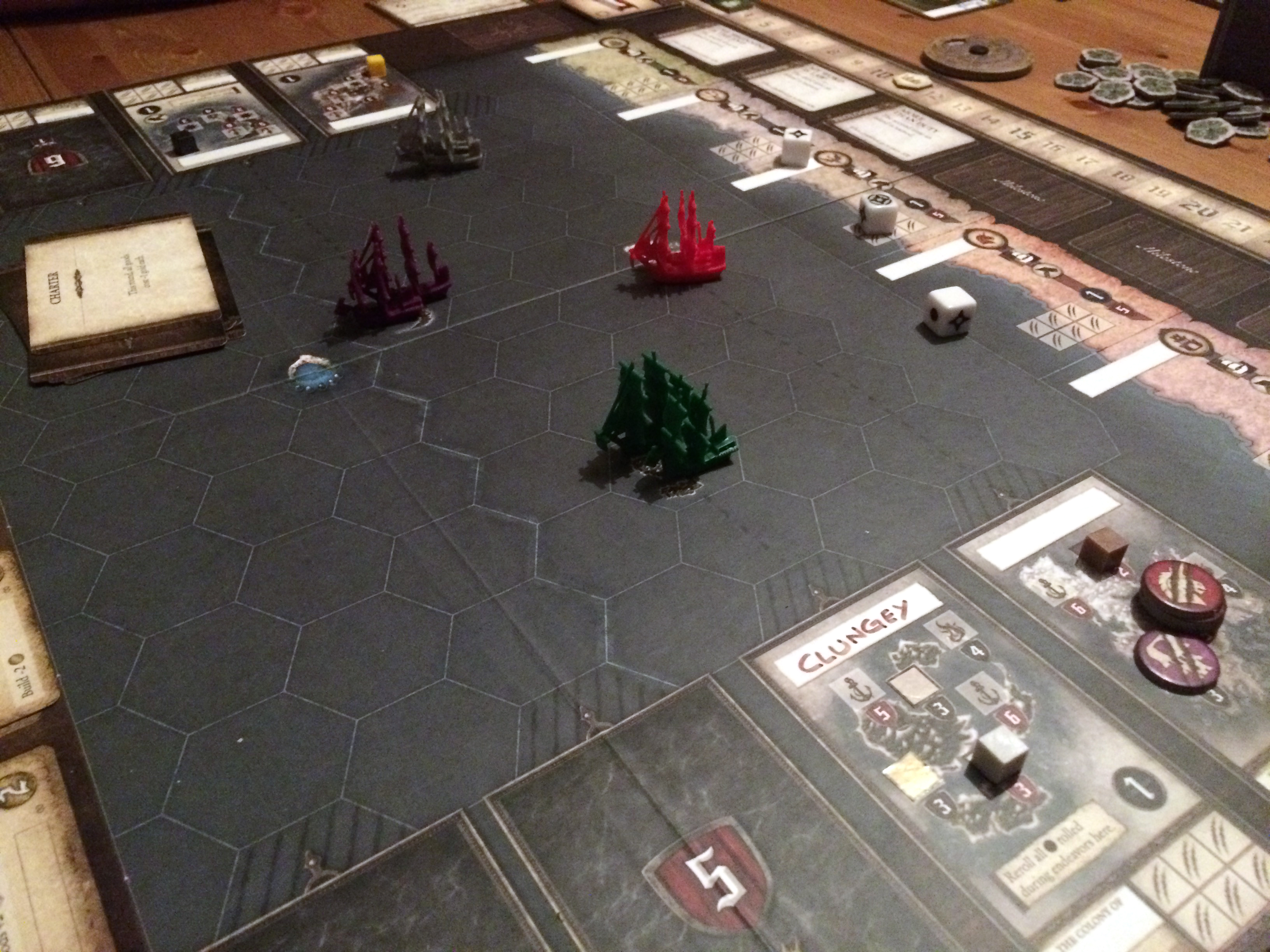 For those of you unaware of SeaFall then let me sum that up as briskly as I can. Set during the age of sail it follows you as you nurture your province of bumbling merchants as they venture out into uncharted waters, happening upon mysterious islands and high adventure slowly uncovering the mystery of the lost civilisations that came before you. Paired with the legacy system that actively encourages stickering boards, ripping up cards and writing on things it’s a heady mix and an idea ripe with exciting possibilities. 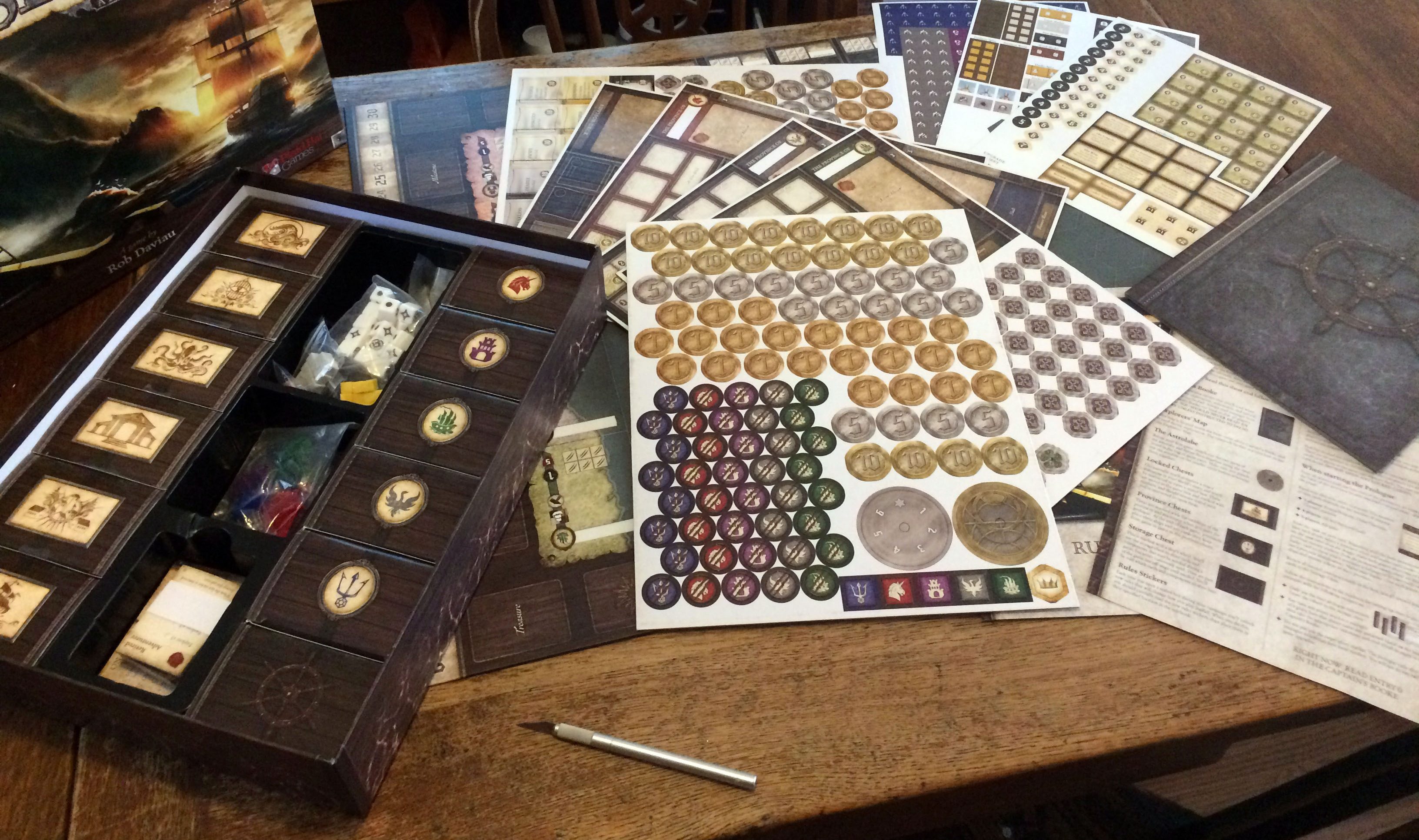 And upon first encountering the contents of this voluminous box you’d be pretty optimistic that the journey you are about to take would be exactly that. Which makes the fact that while SeaFall does indeed contain all of these things it’s a crushing disappointment to discover that it never manages to truly capitalise on any of them.

The one area that the game does deliver is the abundance of the Legacy experience. As with Risk and Pandemic, SeaFall has those marvellous boxes each a tantalising prospect of new and exciting developments however its in how it chooses to utilise them that differs from its illustrious predecessors. Whereas in Pandemic each box felt like a thunderclap of new content SeaFall’s legacy moments permeate into the status quo loading each turn and decision with the possibility of changing the game state in some way. This method of delivery is both a blessing and a boon for as the campaign progresses and each new box smears its goodness over the existing game like so much crunchy peanut butter the contents of the subsequent boxes starts to resemble Schrodinger’s moggy. That initial elation of unlocking all this new stuff is tainted by the faint whiff of recently expired feline. There’s unarguably a huge amount of content here to be discovered but so little of it amazes.

SeaFall teases us constantly but it so often feels like your stealing glances at some sprawling epic adventure from the window of a passing train. You’re convinced it’s preparing the foundations with which to deliver a grand operatic tale of redemption and jaw-dropping reveals replete with heart-stopping cliffhangers up until the point it doesn’t.

Imagine for a moment Peter Jackson hot from directing the first two Lord of the Rings instalments decided instead of wrapping up proceedings in a final flurry of Oscar nominations instead went and put the kettle on. And worse still if production was then handed over to the Syfy channel to finish things off with a TV budget and a staff writer who’d been on a toilet break during the previous two flicks if this was a film production the director undoubtedly would have been Alan Smithee. 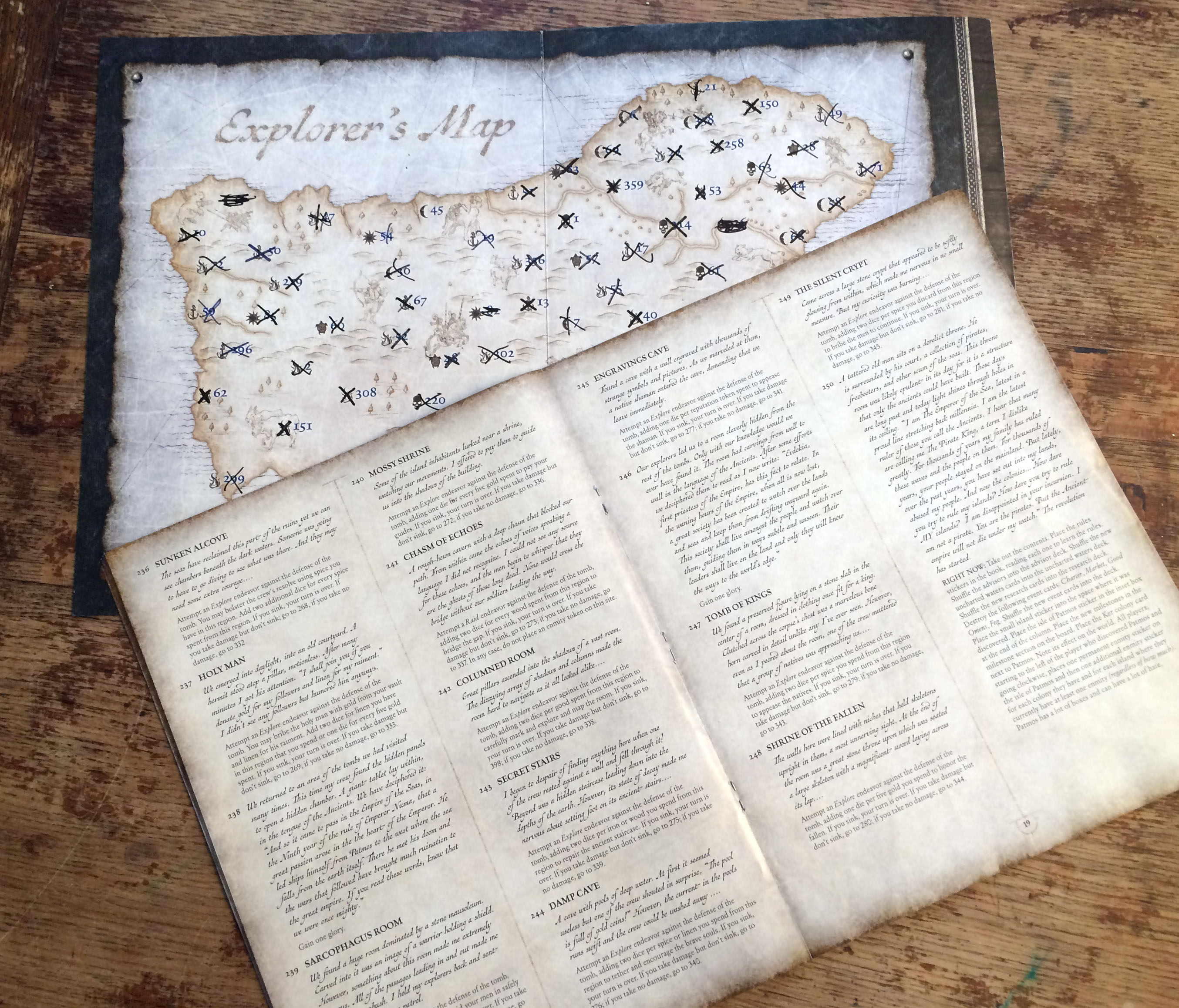 Yes there are spoilers in this picture so don’t zoom in. Have some self control people.

The choice of the Captains Booke to deliver the story inherently created many of the issues I’ve highlighted, with no way to unravel the tight plot that Pandemic so successfully utilised story threads and plots are peppered throughout like a schizophrenic producing a cover version of David Lynch’s greatest hits. The choose your own adventure as the delivery method works in games like Arabian Nights but that’s a game that thrives on the chaos of random crazy when you try and inject a narrative suddenly all that choice feels like your’e on rails. Many of the entries quickly became repetitive with any real surprises so few and far between that ultimately nothing really seems to matter.

In interviews and discussions, Rob has said that originally he’d thrown everything into the design but that it run away from him, and a year into the process the only sensible option was to stop and rebuild stripping away the extravagant and narrowing the scope in the hope of it ever being finished.

It’s during this process I believe that the heart of SeaFall was cut out and the resultant finished design presents us through necessity a compromised version of Rob’s original bigger idea. There’s still fossils from this larger beast to be excavated from what finally was SeaFall but so much of it feels incomplete or abbreviated. It’s not helped that two-thirds of the way into the campaign a frustrating amount of rules ambiguities seep into proceedings which threaten to derail the experience.

The game’s final unwelcome capstone is in its choice of how to end. On the board teasing you throughout proceedings is an undiscovered location that requires a significant effort to uncover and will open the last legacy box. Upon first seeing it and after a game or two you wonder how this herculean feat will be achieved and what trials and tribulations you’ll undergo to complete it.
It’s by design there teasing and building anticipation every single time you play, and when finally you’re given the green light to go for it, well my group were slavering.
We’d been pre-programmed to want to open that box to discover its secrets, finding the last continent was supposed to be the end of the game, but then why the box? What was going to happen?

Well the game would end is what, and while within is a hastily bolted on epilogue as if Michael Bay had suddenly been prodded and told to sort this mess out mostly it was the stale air of dissatisfaction.

For me, this started so well, I was willing to look beyond some of its shortcomings. Many bemoaned the actual game wasn’t all that great, and now, here at the end of this world looking back on all we have accomplished I find it hard to be the apologist. That’s not to say that we didn’t enjoy the journey even accepting the ho-hum pickup and delivery mechanisms and the frustratingly random turn sabotaging events. We even mostly forgave the infuriating sudden end game developments of the milestones that could see an entire games preparation dashed by another player suddenly ending the game. 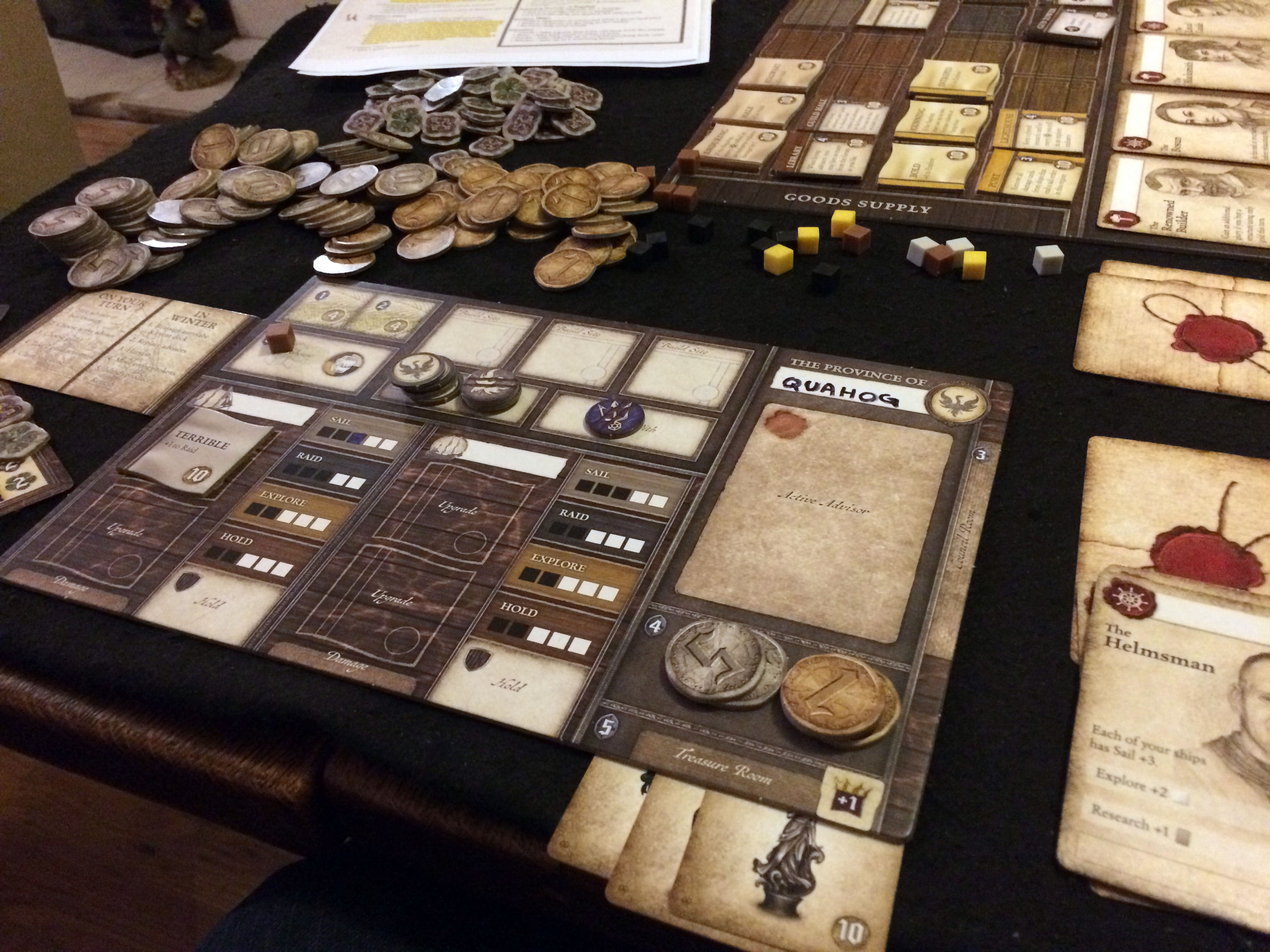 It’s just now, with the knowledge that so much of what you invested time in completing really wasn’t worth the effort, so often you could have just as easily taken a shortcut to accomplish the same result. It’s a growing sense of disappointment that all the really cool stuff that could have happened all the things you were breathlessly anticipating were never there, to begin with.

To dive back into the film analogy SeaFall is Rob’s Heavens Gate. I appreciate that hype is punishing to anything be it games, movies or date night and after the whirlwind caused by Pandemic Legacy this could have cured cancer and there would have still been a dissenting voice. But it’s not that, yep this at the end of the day is just a game and for what it’s worth for a majority of it I did enjoy myself. But all of that goodwill, all of those hours poured into this sours when you finally have to shrug and acknowledge it’s really not all that good of one.