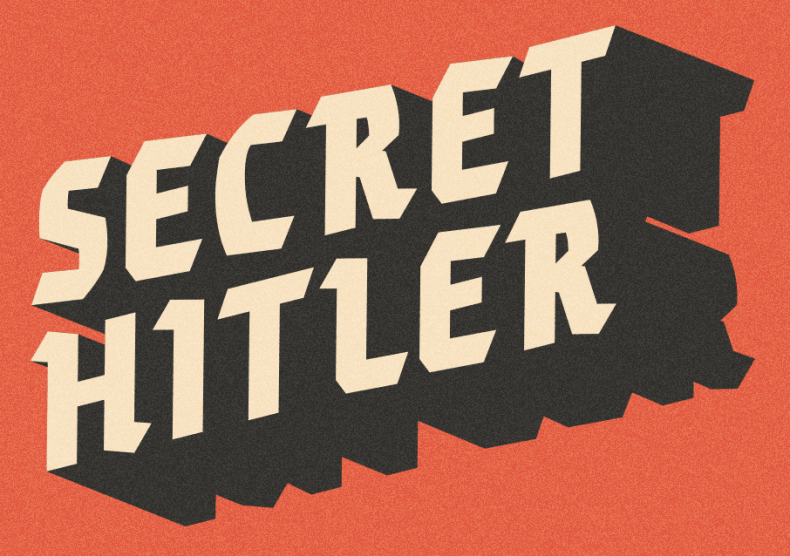 Are you good at bluffing and lying? I’m not. I’m bloody awful at it. I have tried to play poker, but it really should be named ‘who would like to have some of Adam’s money?’ My first attempt at Skull ended up with me crashing and burning in the most spectacular way imaginable. And Werewolf has seen my clumsy attempts to trick people into revealing more about themselves end very, very badly (I wasn’t even the werewolf). Yet I keep on coming back to them insisting that this time, I will definitely crack the art of bluffing my way to success.

And so it was that I first encountered Secret Hitler.

I’m pretty certain if you are here, you know about Secret Hitler and its Kickstarter originals. I was fairly late to the party, but someone pulled a print and play copy out and I sat down to it, something seemed different about this one. And not just because we’d all had experience of these sorts of games before (we’ve all experienced the hidden identity game moment when a new player kicks up their cards and declares ‘It says I’m a werewolf – what does that do again?’). 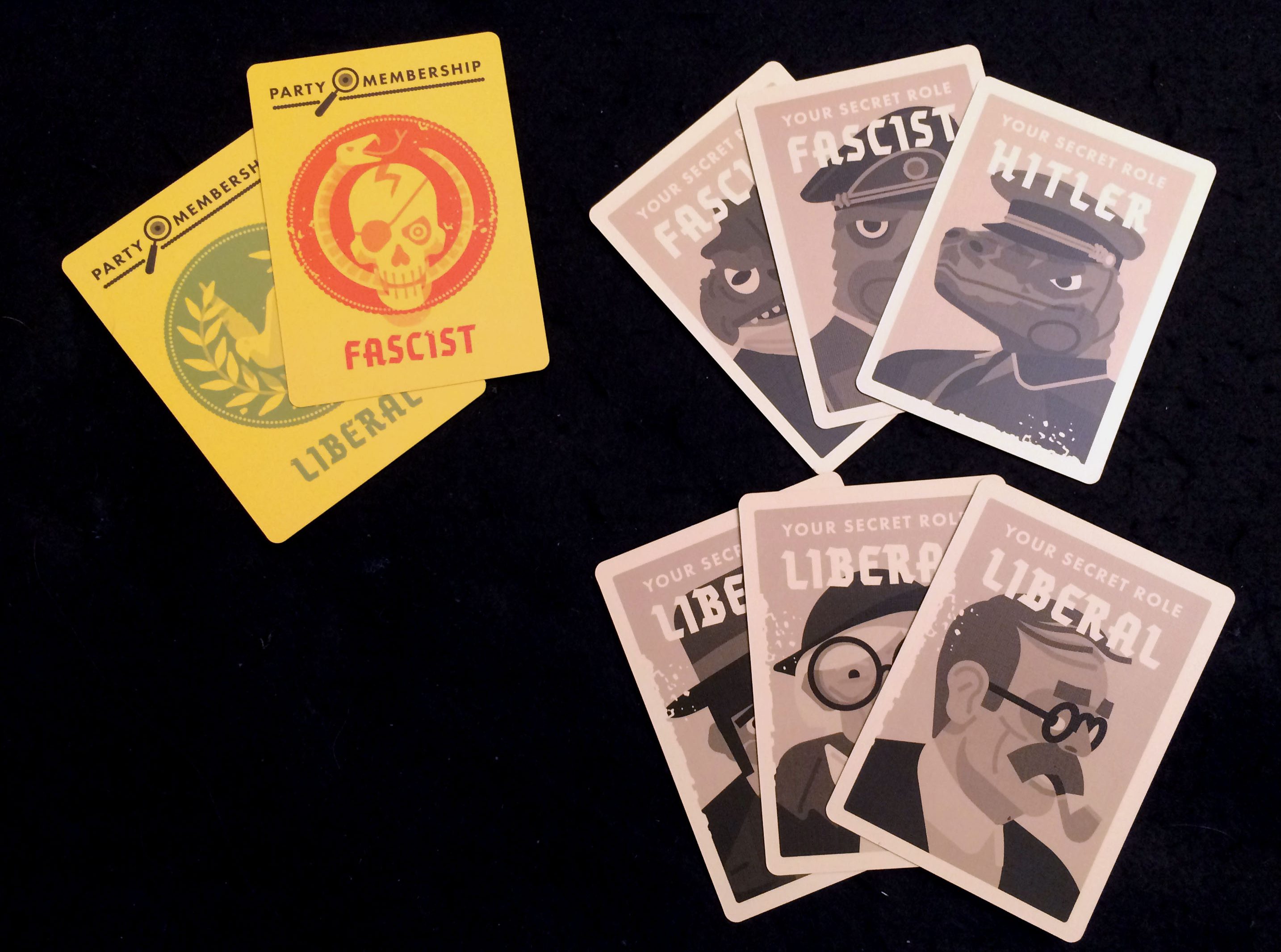 Secret Hitler provides all the players with hidden roles – either that of a fascist or a liberal. The aim of the game is to form a succession of governments and enact policies that fill up a number of squares on the policy track. If the liberal track is filled up first – congratulations! The liberals have managed to thwart the secret fascists amongst them. But the reverse is true if the fascist track gets filled up first. 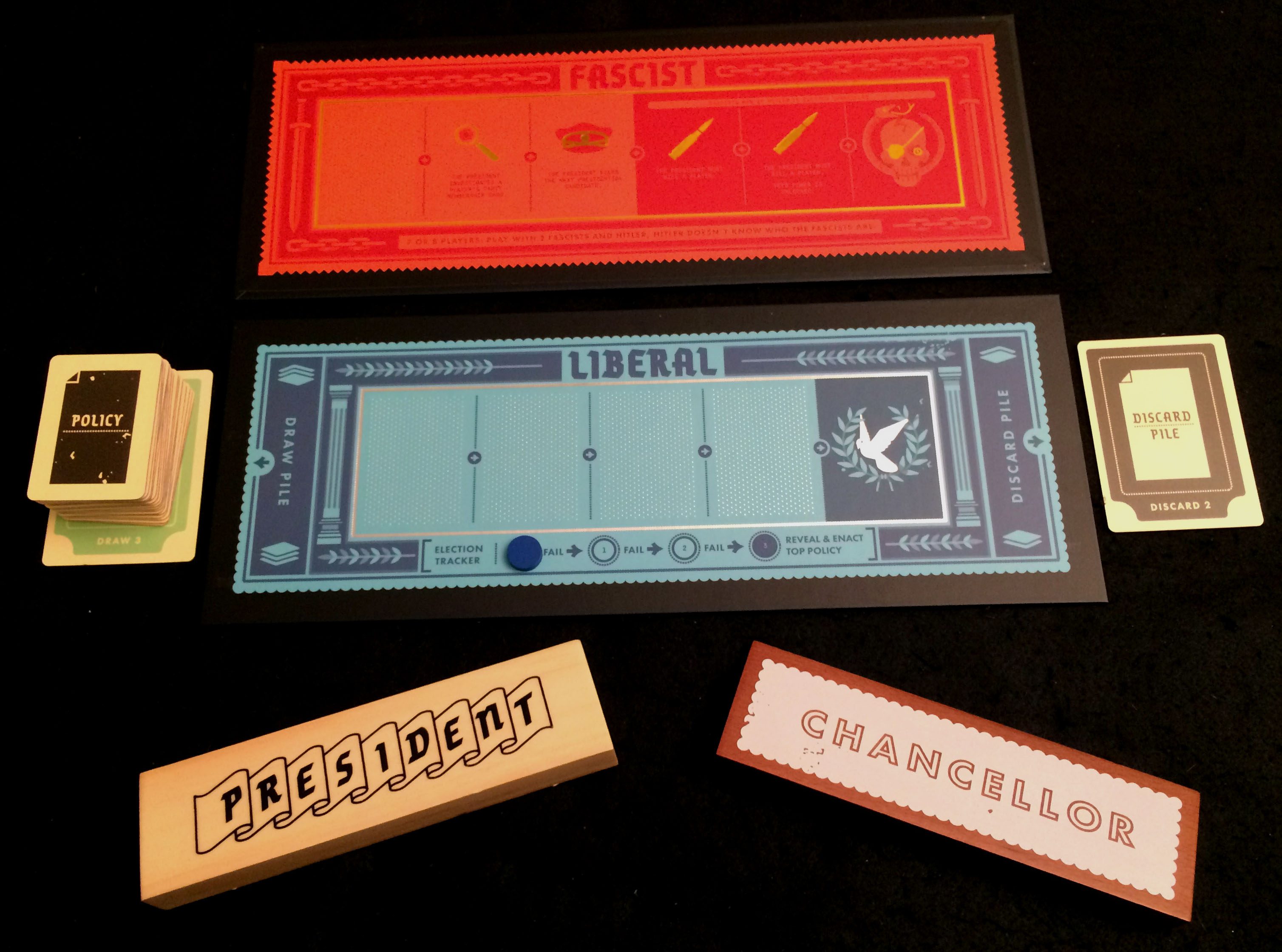 Each turn one player is given the title of President and they must nominate a Chancellor from the other players. The players would then vote on whether to accept this Chancellor or not, with a simple majority carrying the vote. If the Chancellor Is not appointed, then the Presidency is passed to the next player on the left and the process is repeated. However, too many stalled governments also see a random policy enacted, so it is in everyone’s interests to ensure that at some point a government is formed.

If however, the vote carries, the President would pick three cards from the policy deck. These either have Fascist or Liberal written upon them. Without any remark, one of these cards is thrown away face down by the President and the other two passed to the Chancellor. He then selects one to enact and adds it to the respective place on the track. Then players can start trying to convince the others about what they held and what they threw away, before throwing as many accusations and insults about the table as they see fit. 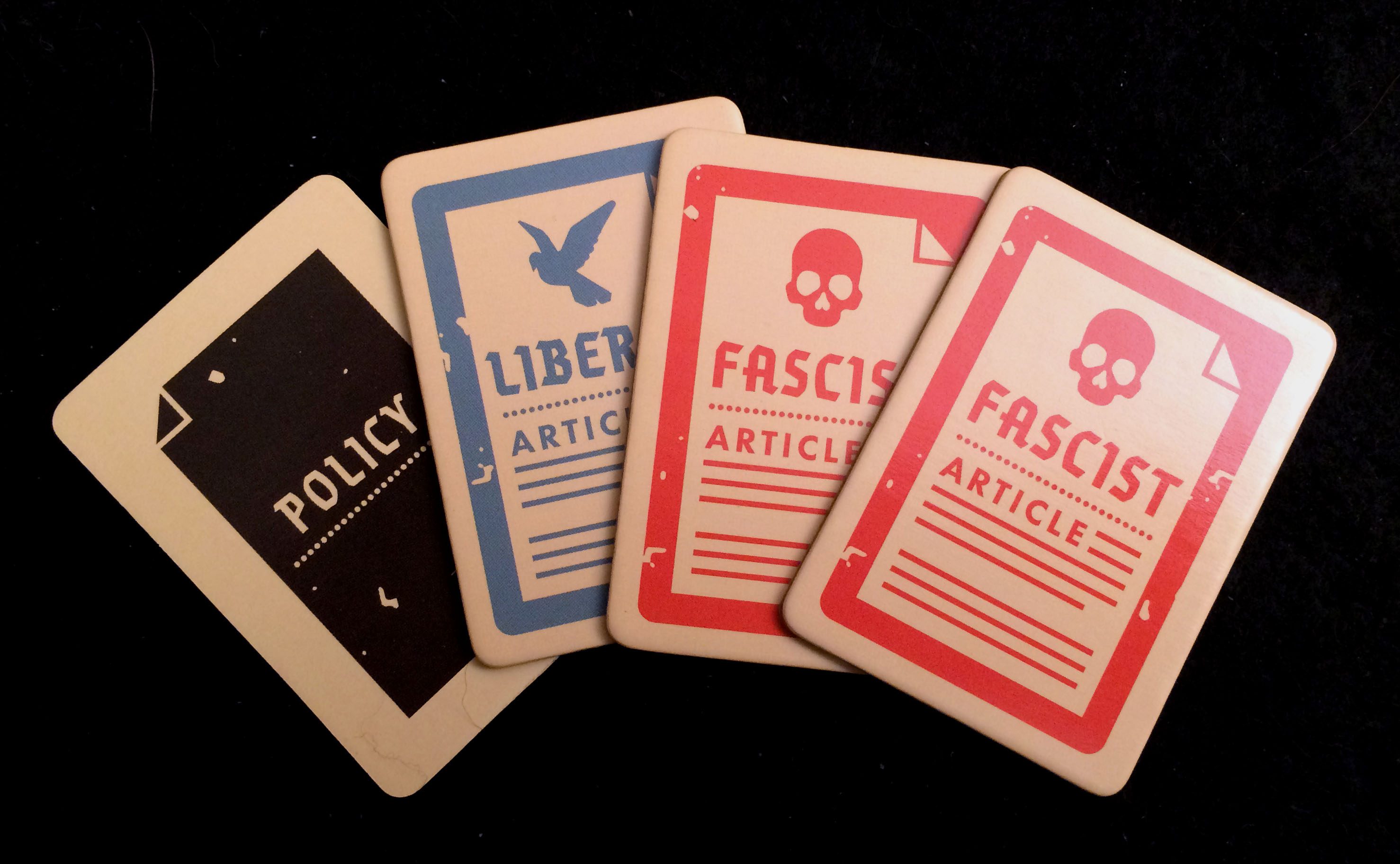 One of the fascists also holds the hidden identity of Hitler and it is this role that makes the game. Dependant on the number of players, Hitler and the fascists may know who one another are, or the fascist players may know who Hitler is but not vice versa. The fascists can also cause the game to finish sooner in a Fascist victory if they are elected Chancellor after a certain number of fascist policies have been put into place. However, the role is also the fascist’s weakness. If Hitler is killed at any point, the liberal’s win the game.

And yes – I say killed, as the further, you go up the fascist track, the more powers are given to the President. The President can look at the next few policy cards; can choose to have a played ‘disappeared’ or even look at a player’s identity. And that is the little temptation to the President player. Maybe I just let this fascist policy through for the greater good? What’s the worst that can happen?

At this point, you can clearly see the serious point that the game is trying to make – that any erosion of the rights of democracy, even with the best of intentions, is a single step on a dangerous road. Yes – this point is made rather unsubtly and some people may decry the game for attempting to be overtly political. But I really don’t care because its really a lot of fun.

The game is very minimalist in its components and art styling, but it fits very nicely within the time period it is seeking to emulate. The cards are clearly defined and it is highly unlikely that you will be confused by what is being played. The fascist player cards have a design of lizard men in military uniforms, including the Hitler card. Obviously, a game illustrating various members of the Nazi party would not really be appropriate, especially with a title as evocative as Secret Hitler.

The title will be something that will put certain players off. I can quite understand that position and would not seek to persuade anyone to play the game if they really find it offensive. However, it is worth noting that the actual mechanics are very solid and there is little offensive about the play experience. If there were to be a re-skinning of the game, I could see those players finding something to enjoy here.

As ever with social deduction and bluffing games, this game is entirely dependent upon those around the table. A quiet group will get very little out of this and it needs the players to start investing in the experience. Once that first fascist card hits the table, this is where the game will sink or swim as you see who amongst you is willing to step up and throw the first accusation. As the game rule state, there are three possibilities for that card being down – either the President or Chancellor is a fascist, or you have been screwed over by the policy deck. It is amazing how quickly people gravitate towards the first two. 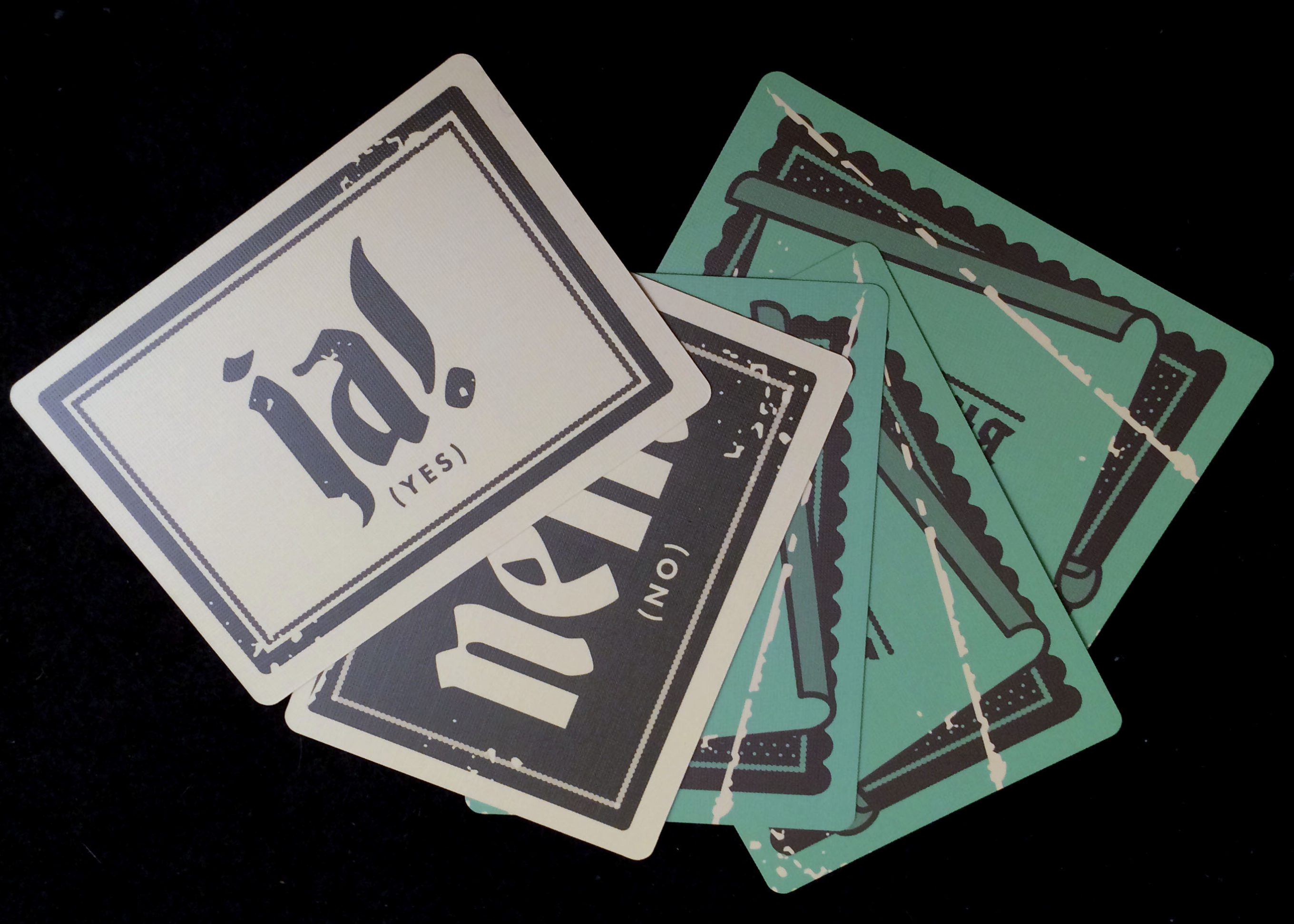 Some players may complain the game is weighted too heavily in favour of the fascists. They know on another at the start and there are more fascist policies in the deck than liberals. I have seen more fascist victories than liberal, but I think that may just be down to the levels of mistrust sown between the groups. The liberals need to remember that they will outnumber the fascist on every occasion and have to have faith in their convictions. Of course, this could fall apart if you are very bad at reading people …

Games are fairly quick as well (not on par with One Night Werewolf), but you should be able to get through even the largest game in 30 minutes or so. It makes it a good introduction to a games night; filler whilst waiting for others to arrive or ice breaker. As a result of the speed, players that are disappeared will not be out of the game for long (especially as this power is only available towards the end of a session). And despite the serious subject matter, it tends to play in a light-hearted fashion.

I would urge anyone who can to have a go with this game. You can still get the print and play version and rules from the website, so there really isn’t much of an excuse not to. You may find the game as fascinating as I do, especially at a time when an examination of populist politics has become almost a daily feature of the media. But as a game, rather than a history lesson, it achieves some much and has kept me very entertained. Despite the fact that in terms of bluffing, it appears as though I am utterly transparent.

The free print and play copy of Secret Hitler can be found HERE.

The pictures in this review are not Adam’s mates PNP version but from Mike’s Kickstarted official version that’s rarer than rocking horse shit at the moment, and he won’t let anyone touch or look at. Bloody Fascist!

And he reviewed it sort of HERE