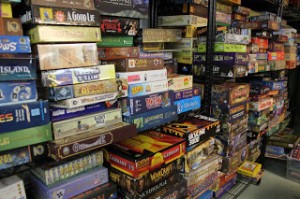 Well done you made it this far, I have no doubt that you have at some point played a board game. Whether its Monopoly, Battleships or Mouse Trap you know what we are talking about. Well my friend you really have barely scratched the surface.

Most UK high street stores are unfortunately still stuck in the dark ages when it comes to this hobby, their choice consisting of all the same light kid friendly blurgh! but it doesn’t have to be this way.

There are hundreds of complex, simple, fun, scary and wonderfully designed and produced board games out there. What follows is a few tips and some very general information to get you going, choosing your particular card board poison and making sure its a success when you present it mewling and fresh to your gaming comrades. There are no rules here except one.

Know your gaming group. Who are these guys you are going to be playing with? What prior knowledge or interest in gaming do they have? This is the most important chunk of advice I can give because this will have a bearing on what you bring to the table. My group is pretty open to most gaming experiences but Bob in particular is quite hostile to new things or more importantly complicated new things. There is little point in you trying to introduce your new buddies to Twilight Imperium 3* straight off it will be a disaster, likely everyone will hate the game and you for making their heads hurt. (you don’t want this) So start by keeping it light and easy there will time later for the really good stuff.

*I actually tried this myself about 6 months into our groups regular game nights and it very nearly resulted in Bob having a stroke, this experiment has of this point not been repeated

If you don’t have a group yet then there are options. Board Game Geek has a Gamer Database where you can search for players in your area. Or if your lucky to have a local game store they are bound to have like minded individuals looking for a game (the best part of this is you can try out games this way and see what you like). There is also Facebook, Google+ and numerous other social media havens for which you can seek like minded folk, personally i’d avoid Reddit as there seems to be a large than normal troll infestation in those parts and the whole system appears designed to alienate and derail anyone’s attempts to actually post into it.

Money – This hobby can be expensive, so budget yourself. I currently try to limit myself to a new game a month. The average price for big box release these days will run you anywhere from £30 – £50 (around $60) at that price range you will be getting a big box full of beautiful things. So set yourself a budget and stick to it because once bitten by this bug its very easy to want it all straight away.

OK so there are a few different types of games out there now. There are lots of variations on these but this a very simple breakdown of the main styles you will encounter.

Euro – Euro games can be light and simple with a basic theme running through them (farming,building) they are more about the strategy and mechanics they usually don’t have any heavy theme built in. Components are usually simple being predominately wooden cubes with very little in the way of complexity of rules. Another point of most Euro’s is that nobody will be knocked out during a game. There is also a split of much heavier Euro’s out there now and more on the rise this can be deeply rewarding brain burns but will offer a terrifying prospect to new players. For light and easy fare Settlers of Catan is a safe bet avoid the likes of Agricola or Caverna when starting out.

Ameritrash – These are the opposite of the Euro. Big brash American board games oozing with theme, complexity and big lush components. These will usually involve player conflicts with the chance of you being knocked out of a game and a side order of luck, betrayal and nearly always some Cthulhu.

Deck Building – Like the name suggests these are games where you the main mechanic will have you building a deck of cards during the game in fact that is the game. Magic The Gathering and many Collectable Card Games became hugely popular because of this style of play and it has seen a huge rise of interest over that last few years and now there are many differently themed games using this popular mechanic, with the advantage that you can buy the one box and not sink hundreds into buying packs of cards. Dominion is a fine game to start yourself out with if you re looking to dive into this style of game.

Abstract – Chess is one, these are games with very little theme whatsoever and are all about the strategy and mechanics of play.

Cooperative – Its all of you against the board. These run the gamut from light and breezy to intense nail biting stuff. These are great for new gaming groups as everyone gets to work to a common goal against the evil board. They can be punishing experiences and have led to the rise of the dreaded Alpha Player ( the annoying one who constantly tells everyone else what to do). If you are looking to get non-gamer’s into the hobby these can be a great place to start.

Now this is all broad strokes as there are many other games that blur the lines between these styles with more occurring every month, this at least I hope, gives you some understanding of the main types you will encounter. Now allow me to pause for a moment and focus on one word in particular that came up a few times above THEME.

Theme is something that separates this new breed of games from Monopoly or Cluedo. While those crusty old things had a light smattering of it most modern board games are simply oozing with it. A good game will have its theme layered throughout from the components and the board through to the mechanics. If its done right you will be immersed into these worlds for the few hours that you are playing and by the games end you will have had an adventure that you will be able to joyfully recount to friends later. You might get a few strange looks but hey then more fool them because they are missing out.

So you’ve found a game you like the look off and you’ve ordered it. Now what?

Whenever I’ve picked up something new I will always have a play-through at home on my own. If you can do this I highly recommend it , go ahead and set up the board and run through the rules, at least for a turn or two. Trust me this is invaluable, the last thing you want to do is turn up at your game night with a shiny new toy and then spend the next four hours struggling to get things moving, that will kill your evenings fun faster than proposing a game of strip Uno. Use the web as well there are countless instructional videos out there to help you get to grips during those first timid steps.

And I can’t say this enough read the rule’s and then read em again the worse thing you can do is skim read a manual and bluff you way through a play-through. If you miss a vital piece of information you can ruin an evenings entertainment, despite all this preparation the odds are still high that you will get something wrong, but as long as everyone is still having FUN than soldier on.

Now this may all sound like a lot of work, but really its not. Getting a new board game is like Christmas morning for me. Opening that box for the first time and popping the components out and discovering a fresh new set of rules and goodies is brilliant and if its a good one your be gagging to get it too your friends. And if you do this enough that learning curve drops off, many games utilize the same rules and mechanics so eventually once you learn the lingo you’ll be an old hat at this stuff.

If you are going to follow just one piece of advice from me it has to be the first “Have Fun!”