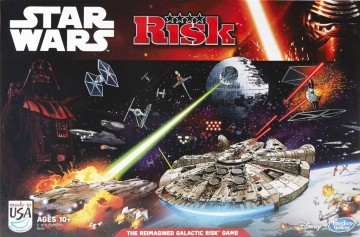 Relatively inexpensive for what you get in the box.
Fast to play and set up, and generally rules light.
Highly thematic.

The board and cards are a bit flimsy but not a deal breaker.

This is a fantastic game and considering its coming from license whores Hasbro this actually has a heck of a lot of decent design choices, thematic game play and thought put into it that we normally wouldn't expect from them. This plays and feels like a really satisfying miniatures filler game, do yourself a favor and grab a copy before it becomes another highly sought after thrift shop treasure.

Force Friday saw Hasbro spewing a bloated heap of board games slapped with the Star Wars mantle all over the shelves. I’ve sifted through the congealed remnants and unsurprisingly most are terrible, slapdash cash grabs. However, glittering amongst this slurry of mediocrity is one gem Star Wars Risk.

Now before you come over all Ackbar, this isn’t a trap this has absolutely no connection to Risk other than they both have boards, and little plastic miniatures in them, that’s it. I can only assume that it’s saddled with the name due to the bizarre licensing issues surrounding the franchise, the same that resulted in Fantasy Flight sneaking out Imperial Assault as a tactical miniatures game. 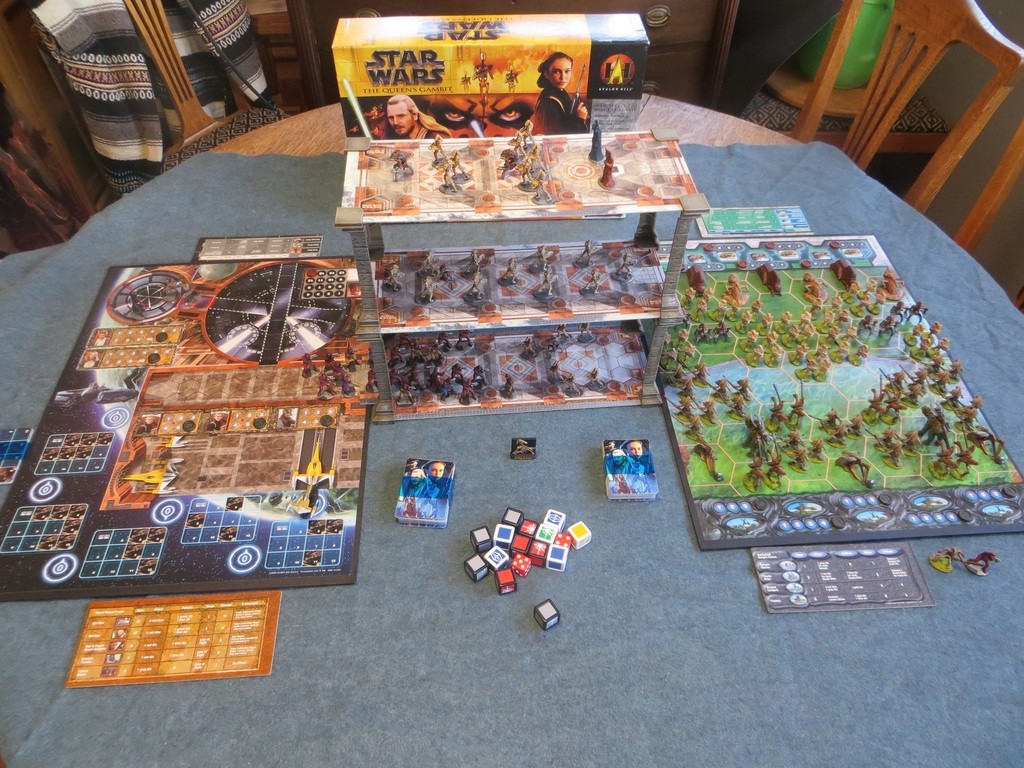 One of the few great things to come out of the Phantom Menace was The Queens Gambit board game. Bulging with miniatures and even a 3d board, it captured the final three battles that took place at the climax of The Phantom Menace and although light was a hugely entertaining and thematic affair. Sadly it’s long out of print and harder to find than someone over the age of 25 who’ll admit to liking Jar Jar.

What you may well ask has all that got to do with the other, well Star Wars Risk is essentially a retheming of The Queens Gambit. Instead of the climatic Episode 1 battle we get the equally epic multi-part scuffle rounding off Return of the Jedi.

It can be played by four but essentially its a two player game, one side playing the Empire the other the Rebels as they butt heads over three fields of battle.
There’s the duel between Luke and Darth, the battle of Endor and the desperate huge space battle that takes place orbiting the newly constructed and operating Death Star 2 electric boogaloo. 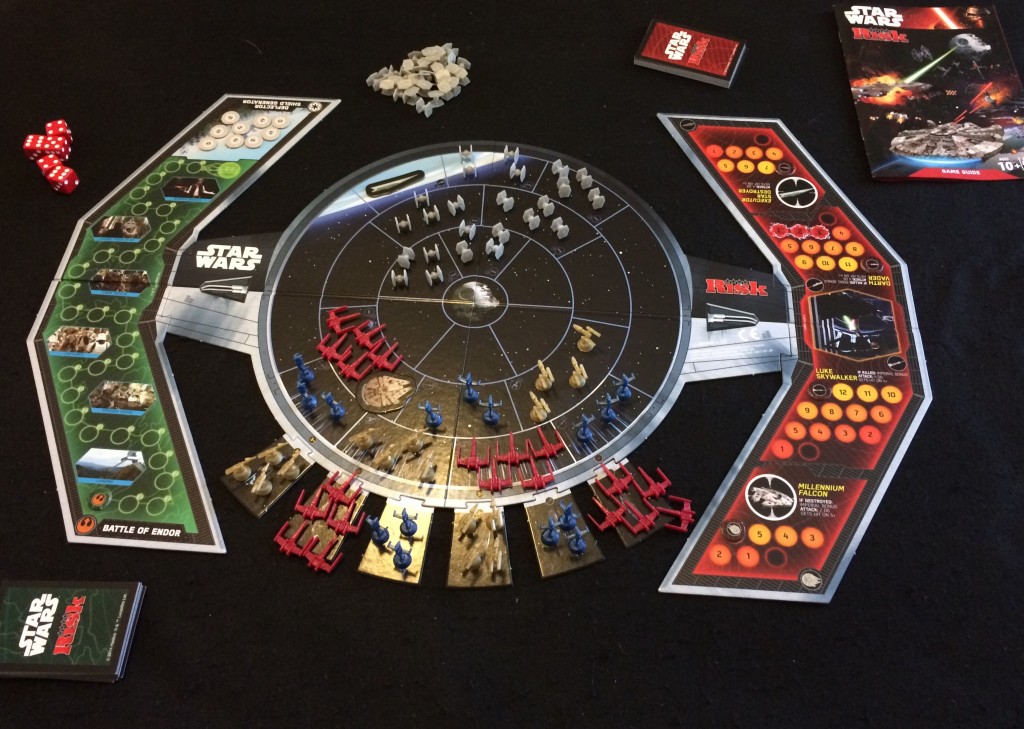 This has a brisk play time, is light and oodles of fun. The victory conditions are simple the Rebels need to take out the shield generator on Endor so that the fleet can blow up the Death Star. And while that’s happening the Imperials need to hold out until they have wiped the Rebel fleet off the board. 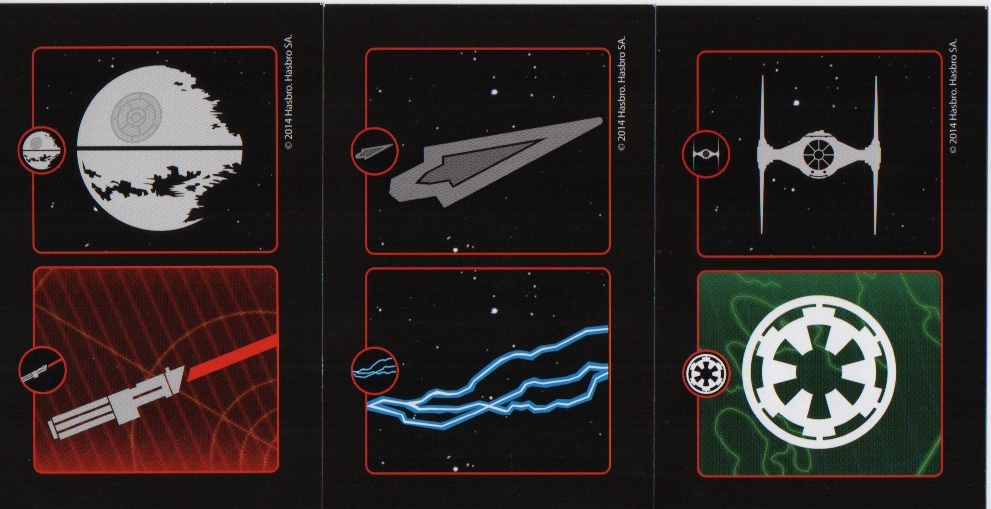 Each side starts by drawing six cards from their decks. These each feature actions relating to the three battles occurring simultaneously on the board. They choose three of these and then taking turns play them and choose one of the two corresponding actions. 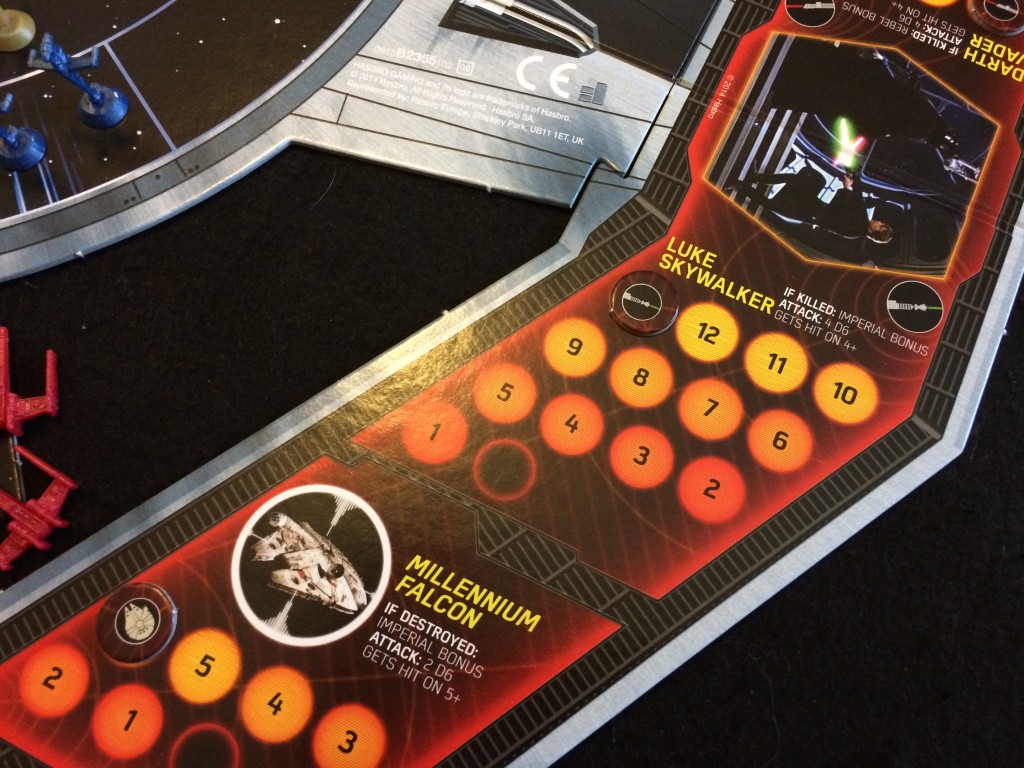 The duel on the Death Star feels more of a distraction to the main event, but it does offer some rewards. The victor gains additional cards played straight away representing the swing in morale as Luke resolves his daddy issues and indulges in a spot of patricide or succumbs to the Dark side. 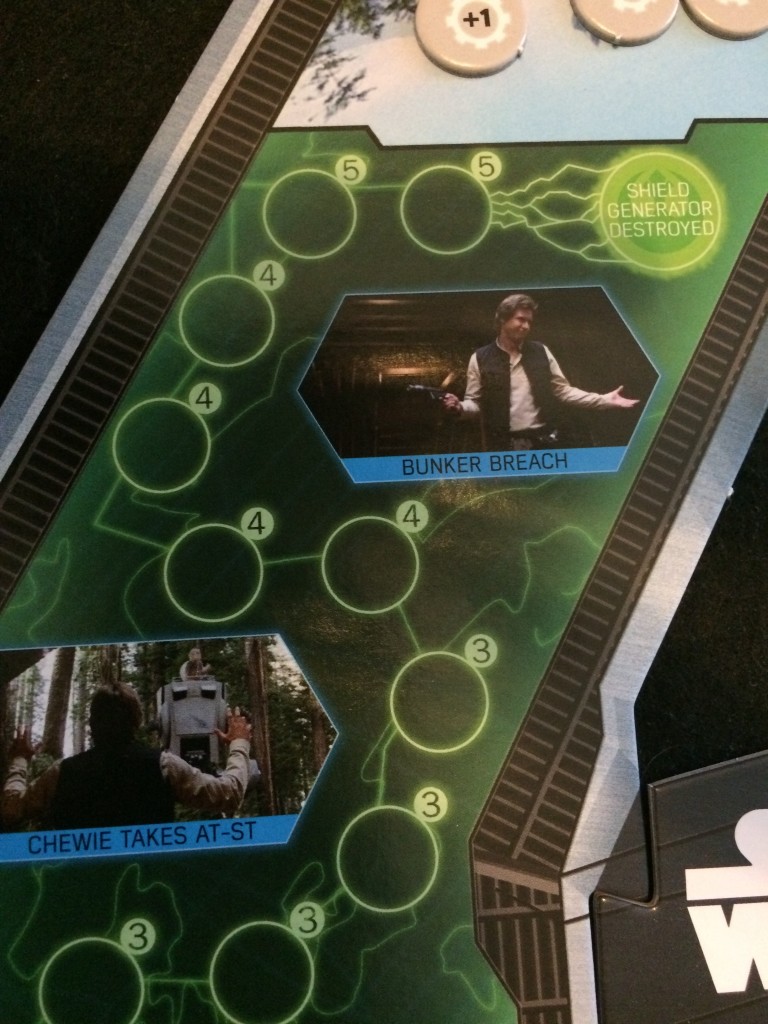 The Endor battle is a deliberate slow trudge by the Rebel troops towards the shield generator. As an action they have to roll dice totaling more than the difficulty on the track, every success will see them inching forward. The Imperials increase the difficulty for these rolls by sending more Stormtroopers into the fray drawing out the battle allowing them to finish the job of mopping up the puny Rebel fleet. 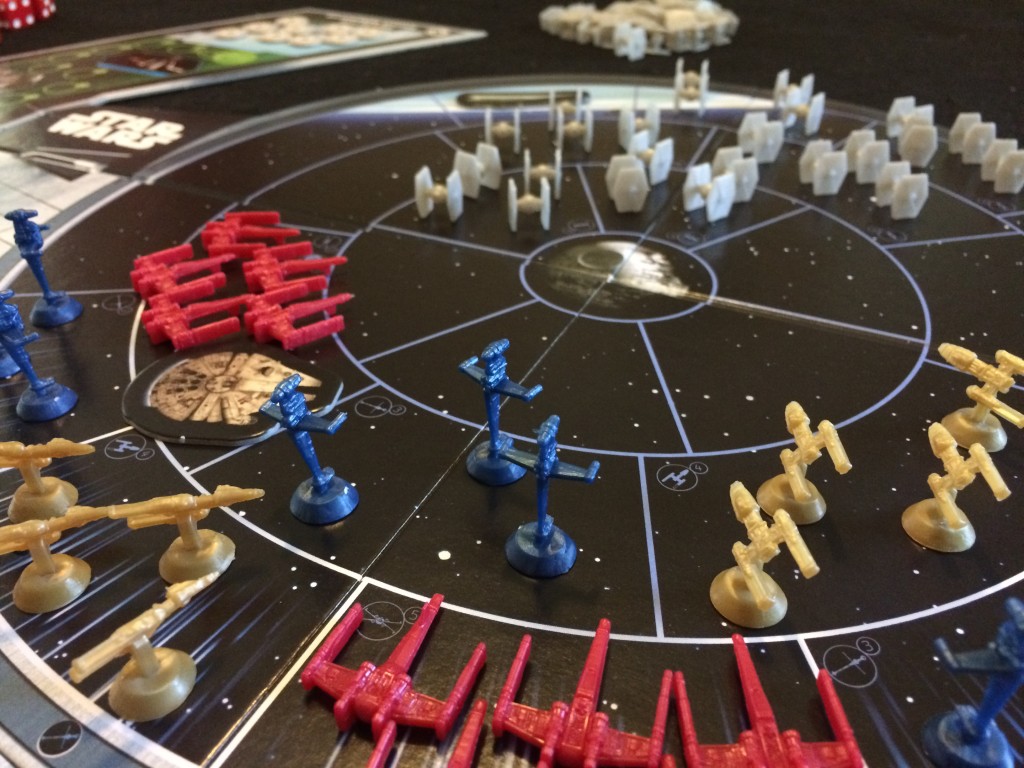 The centerpiece of the game and the board is the space battle; this features heaps of miniatures depicting the various Rebel fighters, X-wings, B-wings, and Y-wings oh my! Hunkered down around the edge of the board is the Rebel fleet where reinforcement fighters are docked and can be launched forth. And of course, no space battle would be complete without the Millenium Falcon tear-arsing about in all its pimped-out glory.

The Imperials start with squadrons of TIE’s prepared to descend on the beleaguered Rebel fleet and the Executor Vadar’s bad MOFO battlecruiser. Aside from attacking as an action the Executor can drop an infinite supply of TIE fighters onto the board, it’s worth noting you Rebels over there that this is the only way the Imperials get reinforcements.
The ace in the Imperial navy’s hole is the Death Star, fully armed and operational (cue maniacal laughter) its initially limited to taking pot shots at the orbiting rebel fleet. But once they’ve been decimated the squadrons on the board are fair game at which point you might want to get those shields down. 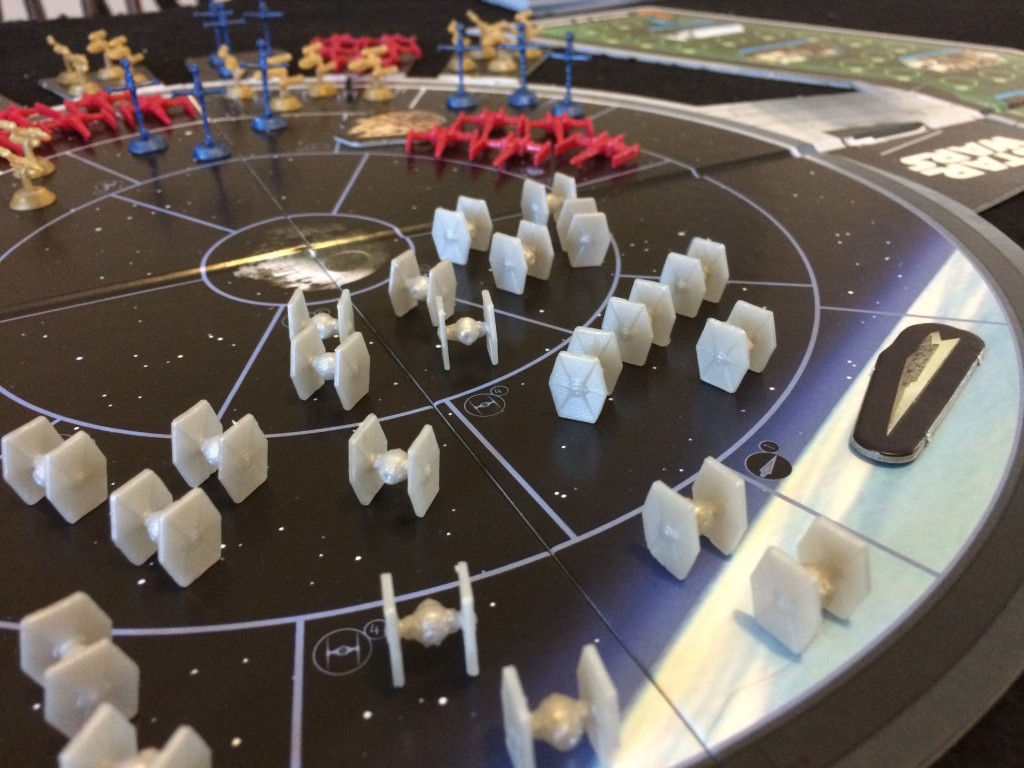 The combat is fast and loose, ships have armor ratings from 3 upwards, and any dice rolled equaling that is considered a hit and the miniature is removed. The game motors along at a fair clip and at most will last around 30minutes, and its a riot.
The three simultaneous battles and the cards used to pick your actions offer just enough randomness that there is a surprising amount of strategic choice for you to ponder what and where to attack.

There’s also those bonus actions, aside from the Luke & Vadar duel there are also bonuses for clearing a sector of space of enemy ships. While that’s only a card, an extra action can be a real incentive to tip the battle in your favour and again adds a satisfying choice to the battles.

This is a fantastic game. I’ve played it with my eldest and he dug what was happening and all our games were down to the wire. Don’t be put off by the Risk name, if you’re in the market for a light, and highly thematic Star Wars game then look no further, this hits all the bases. 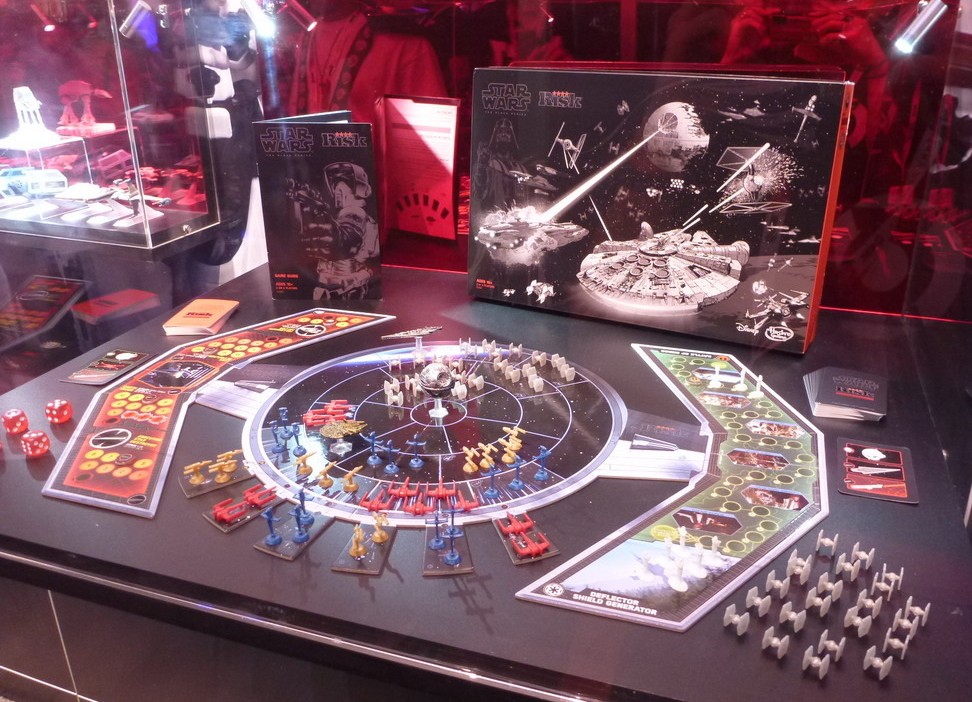 If you’re still on the fence and you really shouldn’t be, Hasbro are putting out a Black Series edition. It contains minitures for the Death Star, Executor and Falcon and also some little Stormtroopers for the Endor battle and I imagine the rest of the components might be upgraded. The card and board stock is a little flimsy in my version, but if youre not bothered by that extra shiny then give in to your feelings and hunt down a copy