Race To The North Pole 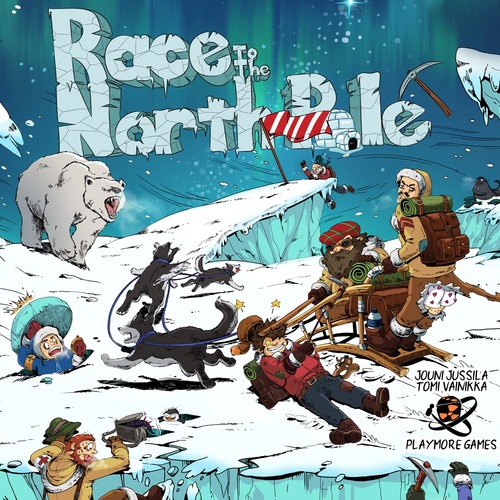 Fast Game play and very easy to explain and get going.
Great for families and gamer's.
Features the brilliant UMM system (spinney board)
Adaptable game play with included components for you to customize.
It has an App.
I know Eric Lang has a copy and he knows a thing or two about games.

Fairly brutal game play, things can quickly devolve into a vicious tit for tat. Those of a delicate persuasion or pacifist tree hugger's might want to sit this one out.

With a market saturated with heavy Euro's and terrible serious and thematic game play its actually rather refreshing to come across something that is just there to have fun with. It has a really broad appeal, kids will lap up the cool board design and easy game play while gamer's will relish the opportunity to do all manner of orrible things to each other.

The North Pole. Throughout history, someone’s been galloping around in snow and ice trying to be the first one there, its part of the human condition, well at least before the invention of the iPhone. The most well-documented race occurred between Cook and Peary in the 1900’s in truth race is a bit of a misnomer more a steady amble the expeditions ran into years. The eventual results were muddied with history eventually arriving at the decision that Cook got there first, and Peary was a big fat, liar.

What has any of this got to do with Playmore games new expedition to the pole, well in truth, not a lot. While this could have been a historically accurate extrapolation of the event such as the wonderful Lewis and Clark what we have here instead is closer to a Hanna-Barbera fueled Wacky Races reimagining. 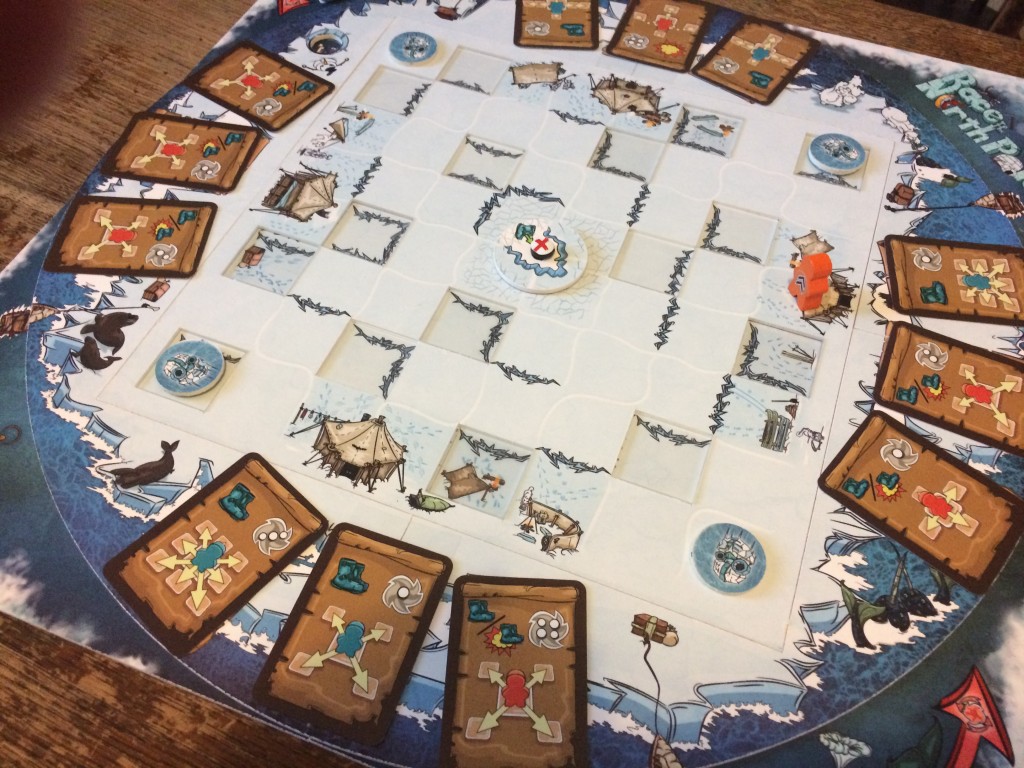 So any expectations of some brain burning Euro can be safely parked at the door. We’re firmly in the realms of unadulterated fun, more on par with something like the wonderfully vicious Survive Escape From Atlantis with a hint of Robo Rally and every bit as cut throat as either.

Players start by assembling their team made up of four stout of heart meeples. You’ll be setting off from your base camp situated around the edges of the board and traversing the tundra to reach the fabled Pole at the center. Movement is dictated by a hand of three cards on that players side of the board offering a mixture of options and speeds. Some of these may also allow a player to ambush a rival team, but we’ll get to those little scamps in a moment.

Your route is littered with impassable ice cracks and ridges creating a tricky maze to navigate. And like the actual North Pole a constantly drifting ice flow there is a rather snazzy bit of design and mechanics involved. You see the main board is essentially a lazy susan or to quote the designers “Unique Unforeseen Mechanic” this UMM is an apt acronym as it’s precisely the noise you make whenever it happens. When a storm hits triggered by the playing of movement cards, the board rotates switching players positions, base camps the maze and even the cards they have at their disposal.
So suddenly what might have been your moment of victory can quickly descend into defeat as you find yourself on the wrong side of the Pole with bad cards and worse it’s likely to have helped a competitor.

Adding some further spice is that ambushing which I mentioned earlier. If an ambush successfully lands you on a rivals meeple, then this has two effects well three actually. The first it really pisses them off, secondly they instantly return to their base camp and finally for being such a jolly good sport you get a treat. These treats are Ice Masks and consist of random perks and equipment that you can hold on your player board to use when it most pleases you.

There are everything from Husky’s used to play extra cards, Snowshoes allowing you to cross those nasty cracks and a backpack that lets you store cards for use later. Hidden among them are random hazards Rampaging Polar Bears, collapsing ice or sudden storms catching players unaware.

And that’s it, it’s an incredibly easy game to play. On a turn, a player simply picks and plays a card, moves their meeple, checks to make sure a storms not hit and refills their hand and then it’s on to the next player. Once all your explorers have made it to the Pole you win.

While mechanically it’s about as challenging as many mass-market games what adds the complexity, violence, trash talk and all manner of other horribleness are the players assembled around its edges. For the first couple of turns, everyone keeps to their own then one of two things will happen. Either a meeple suddenly makes it to the Pole or someone ambushes somebody else. At that moment, there’s a devilish glance that passes from player to player, then they look first at where they are, what cards they have and then their neighbors. For the next thirty minutes nobody is going to much like anybody else at the table, there will be blood.

At a glance, you could pass the game off as being little more than a swiftly escalating grudge match offering little in the way of strategy. But this isn’t true, there’s plenty of information available to everyone, all the cards are on display, everyone knows what everyone else’s plays are. You can predict when a storm will hit, triggered as they are by storm points on played cards reaching a total specific to the player count. Having a good idea of when one will trigger you can play accordingly, or even play to trigger the storm thus shifting the players hands and positions around. The only real randomness in the game is what the other players around the table are going to do to you. 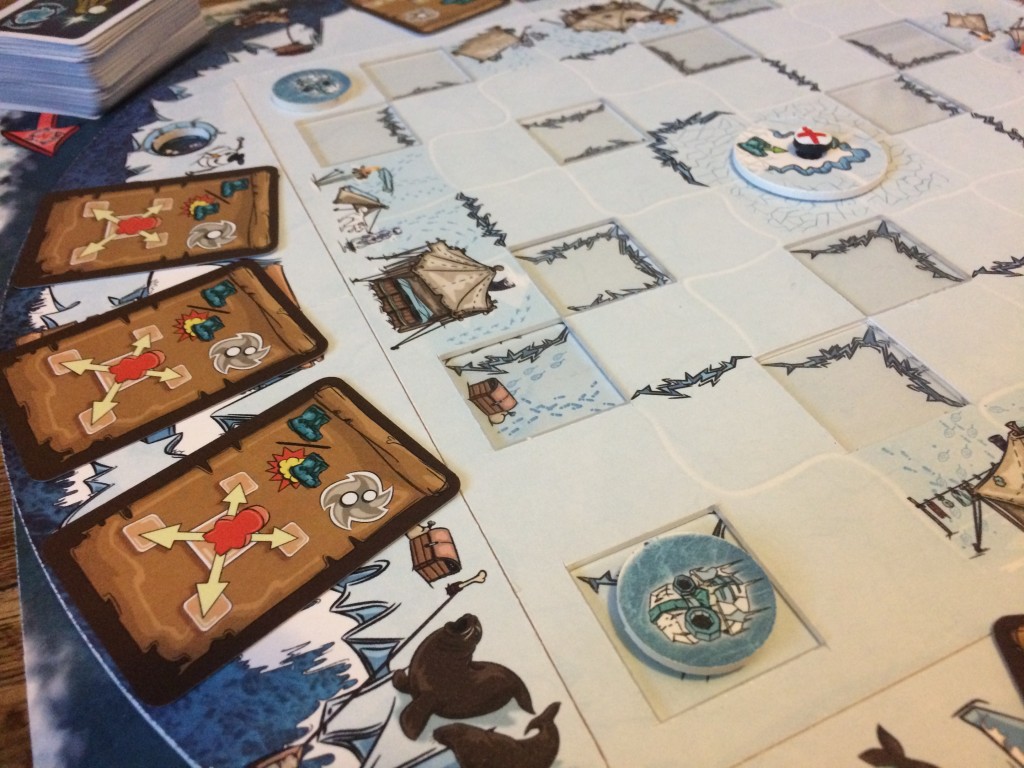 This game is chaotic, once things turn nasty and they surely will grudges are formed and things swiftly descend into carnage, in a four player game ambushes will come thick and fast. If you’re really not a fan of this style of play or particularly thin skinned then chances are you’ll not going to have much fun. There are balances to this, you can play in teams which actually works rather well, reducing the amount of mayhem happening during a round and adds up to a more tactical game. You could, of course, soften the ambush rule by just collecting the ice mask but not sending a competitor packing. It de-tooths the game in my opinion but if it keeps everyone happy then go with what’s right for your group. 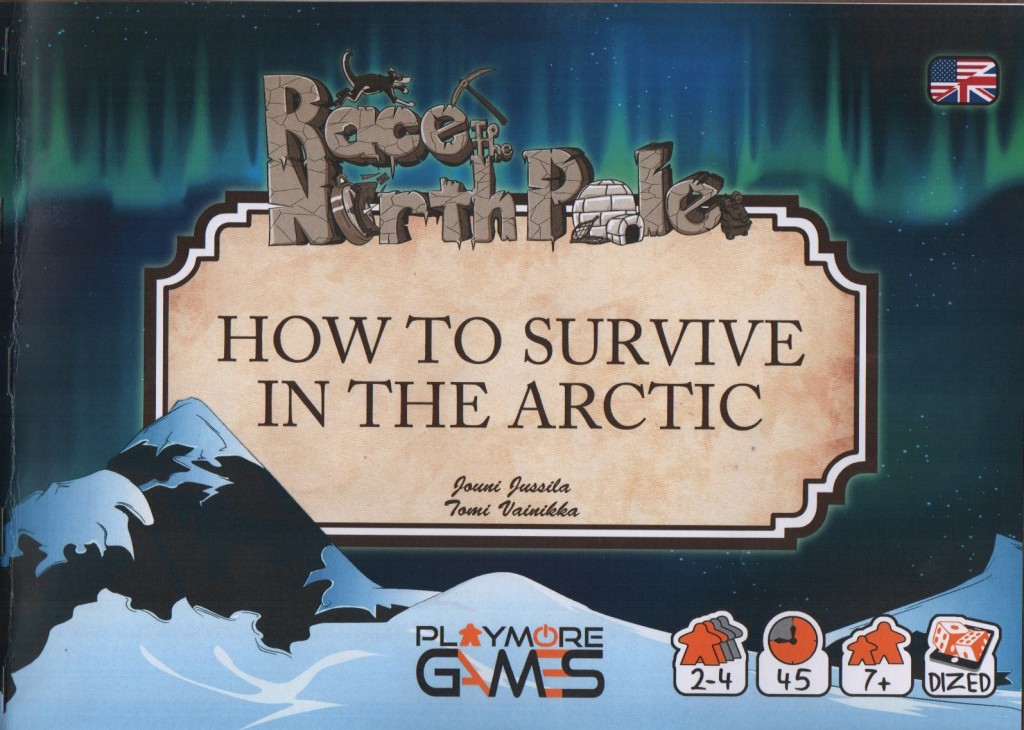 The designers actively encourage you to play in their sandbox, including blank components for you to come up with your own teams, rules or even equipment. It will be interesting to see what homespun carnage materializes over the coming months on BGG.

There is also the Dized app, its still in its early stages, but the intention is to use it to adjust the ways to play. Either by randomizing the storms, building an economy around the ice masks gained from ambushes. Other ideas are planned and the designers are keen to use it to adapt the gameplay not be the gameplay. 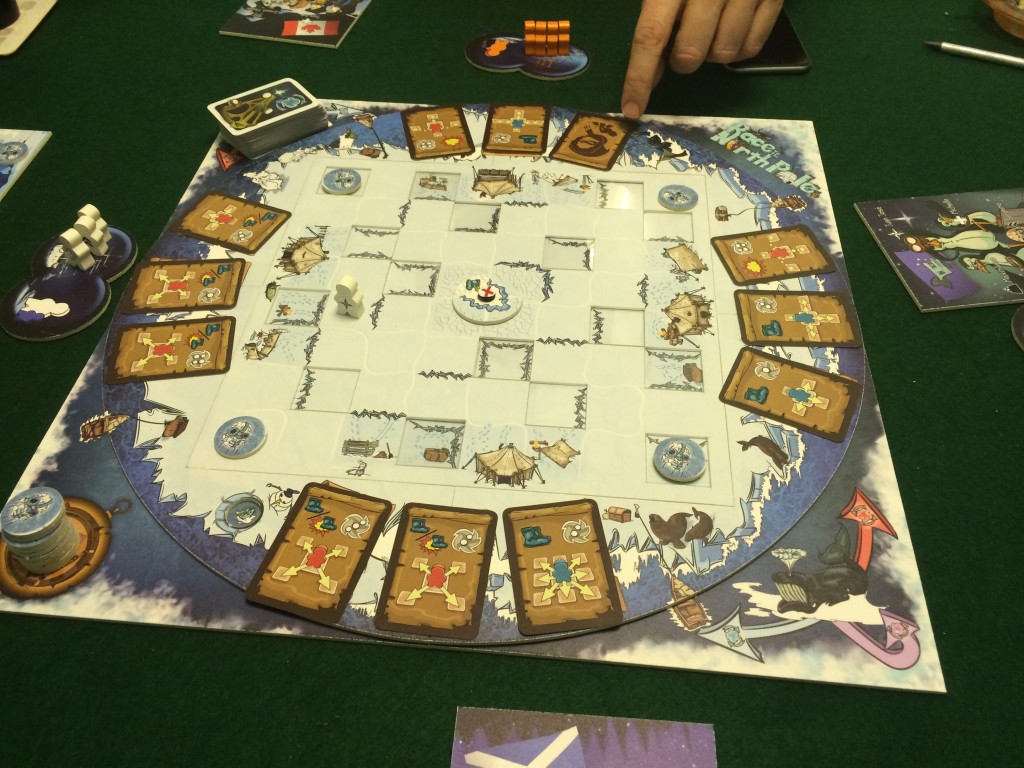 I doth my cap to the design of the board, it’s incredibly easy to assemble and the UMM is truly unique and doesn’t come off as gimmicky being an integral piece of the games design. And it all fits away back into the box really easily. For a first published design, this has some solid chops and sits confidently in that good for families and great for gamers niche. Offering just enough random, balanced with interesting player choices and emergent tactics all compacted into a speedy play time. For anyone in the market for practicing some of that old inhumanity to man business then, this is a must