by Charlie Etheridge-Nunn on November 1, 2017 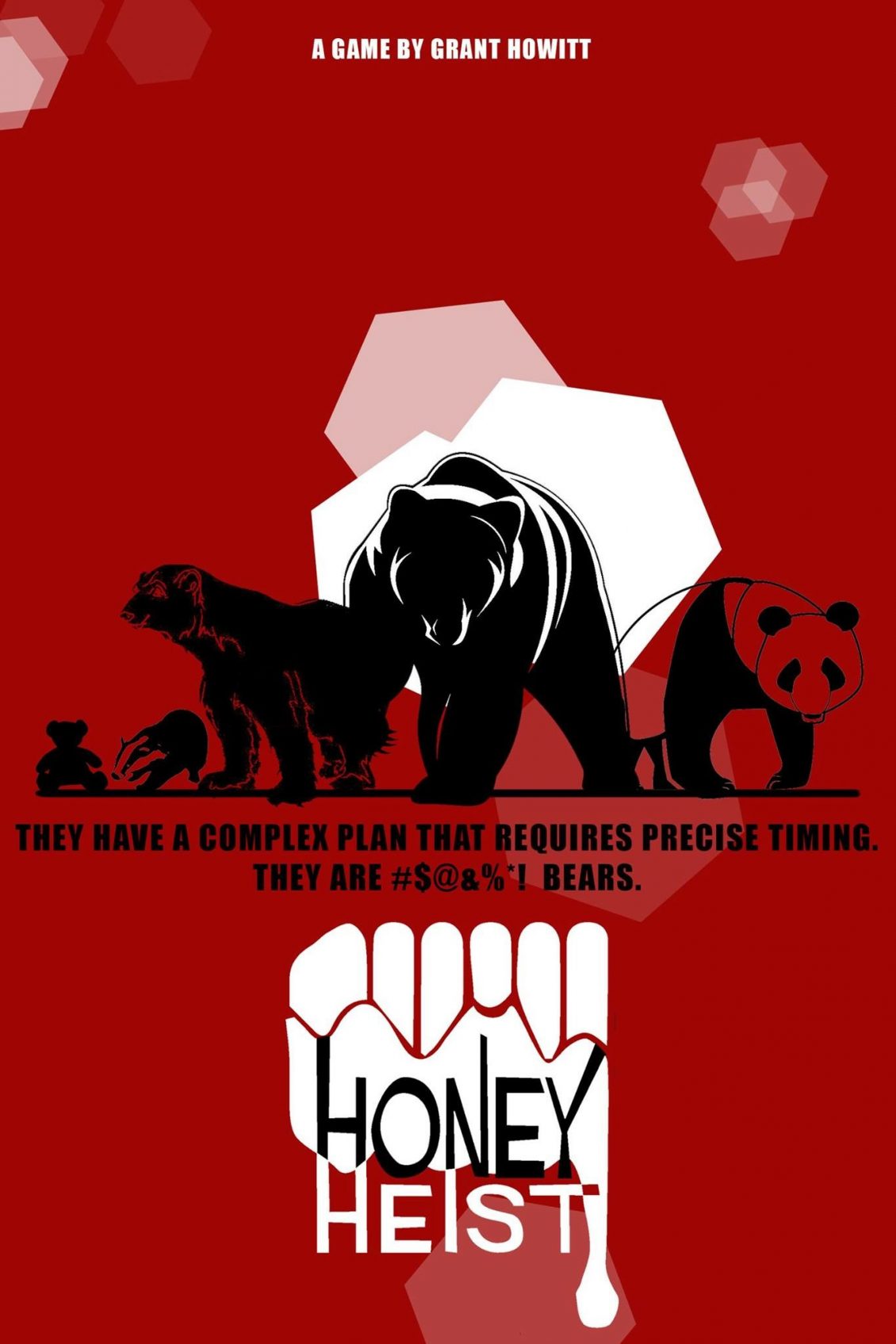 The H.I.V.E. agents were slumming it, really. They stood at the gates waving in cars, handing out lanyards to retailers, entertainers and convention-goers. A car pulled up with a honey badger lying on the roof, one paw doing its best to keep a top hat in place.

“Show me your pass,” one of the agents said.

The grizzle bear behind the wheel looked at the others. He could see the long plastic-looking laser guns handing from the belts of the agents. Their armour was bright yellow but looked like it could take a hit. The road going down to the lake house was lined with several of the guards, all making sure the woods in the area would be safe. The grizzly bear, then spoke, “Rrrarrrarr.”

Honey Heist is a game with a gloriously simple pitch:

You are going to undertake the greatest heist the world has ever seen. Two Things –

One: You have a complex plan that requires precise timing.

Two: You are a GODDAMN BEAR”

That’s it. Each player gets to randomly generate their bear and add a hat to them. The ‘hat’ table says its optional but only a monster wouldn’t roll on it. Our group were:

Lee – Played a honey badger who was a rookie and the group’s muscle. His skill was ‘carnage’ and he wore a top hat.

Mark – Played a panda who was incompetent and also the group’s muscle. His skill was ‘eat anything that looks like bamboo’ and he wore a crown.

Wade – Played a grizzly bear who was washed-up and the thief of the group. His skill was ‘terrify’ and he wore a flat cap. 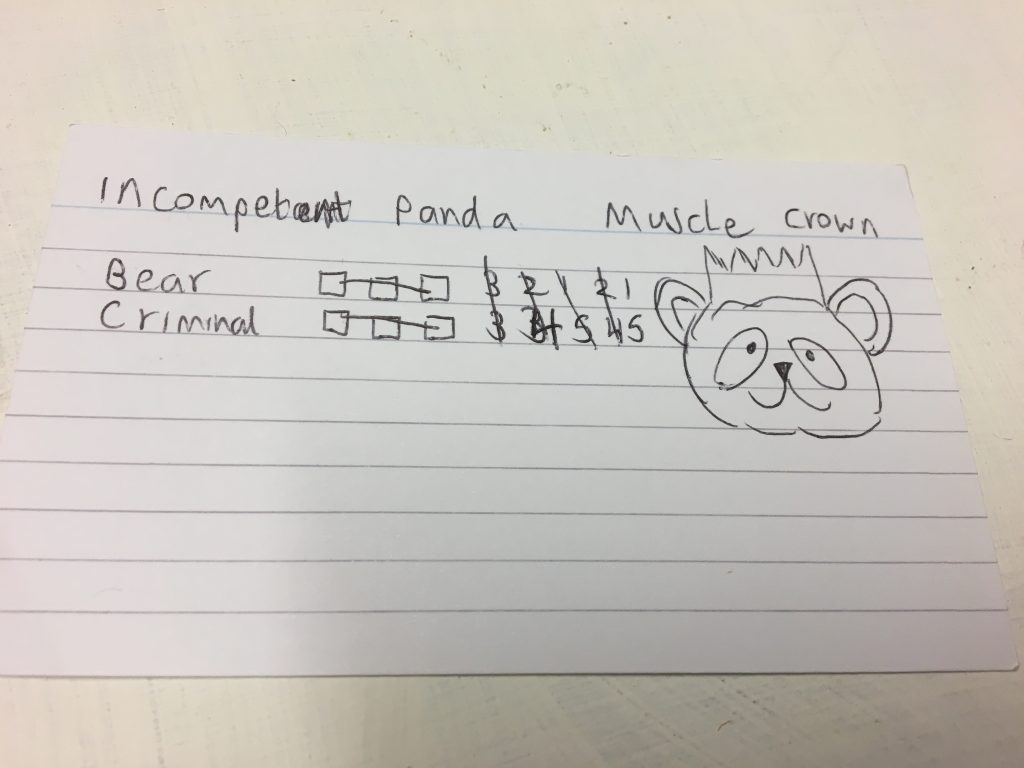 I won’t get into the specific rules as they’re completely free and on one page of A4 here, or two pages if you want the fancy version.

In case you’re too lazy to check out those links, the quick things to know are:

There are two stats: Bear and Criminal. Certain actions raise one while lowering the other, which is dangerous if you max out one stat.

These bears can communicate freely to each other but sound like normal bears to the rest of the world, because that’s what they are.

I made some rolls on the GM tables to set the location, owner and obstacles. Then we began on the road to HoneyCon 2017, which was being held in some lakeside cabins. The intel the bears had mentioned the place was abandoned after some murders a long time ago, but was being made very secure for HoneyCon 2017.

The guards were conned into believing they were part of a display and waved them in.

Wade’s grizzly scouted the area, killing a retailer who was carrying several jars of honey through a shortcut in the woods. He ate a couple of jars, then hid them with the body and took the rest to Lee and Mark’s bears. They’d found evidence of another bear heist already underway and decided to use that group’s van to store their jars. The second team even had a map of the rough area, which the team could use for their heist. 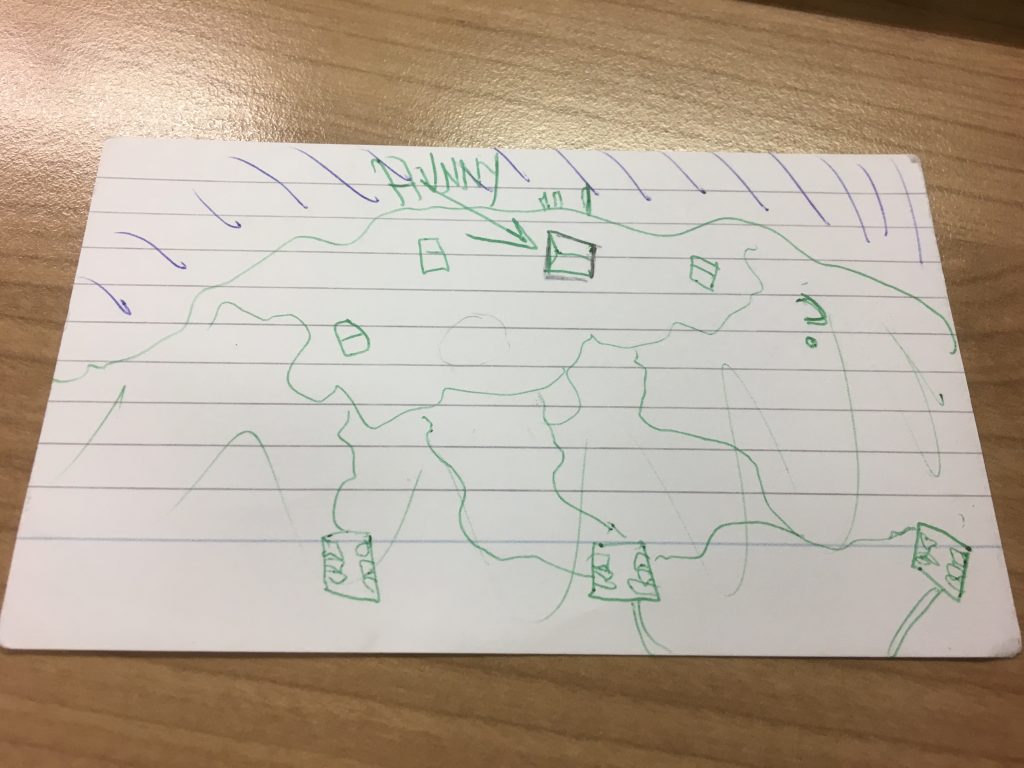 I sketched the map out and the group bee-lined for the question mark, because they’re good players and that’s what they do.

The question mark was a burned down cabin which looked like a fight had happened there many years ago. A machete was buried deep into the ground and guards were wandering around the remains. The group managed to scare them off and take the (inevitably haunted) machete. A bear with a machete in its’ mouth seemed about as effective as D-Dog in Metal Gear Solid 5 knifing enemies instead of just biting them but sure, whatever.

They broke into the reinforced cabin, using Criminal rolls to roll through a laser grid and Bear rolls to smash through objects. Mark’s panda bit through some bars which looked kind of like bamboo. Wade’s grizzly had become too Bear-like at one point so he had to trigger the action to change that: he had to have a flashback to a smoky bar where they were discussing the plan. Thanks to Blades in the Dark* it’s difficult to do flashbacks without invoking those rules, so the group used this opportunity to prepare for a situation which was just about to trigger. Without prompting they collectively described the bar, “Winnie’s” and the barmaid, Bearbara, who saw them all as her sons.

There were some bear-themed Mission Impossible shenanigans, leading to the group finding the prize for the best honey of HoneyCon 2017… Abraham Lincoln’s beehive, said to be haunted by his ghost. This wasn’t the honey score they wanted, but still valuable nonetheless. The honey badger lifted the glass case with the hive, not realising he’d triggered a pressure sensor alarm…

It was around this point where the group remembered that they were after honey, not necessarily this hive. Then it toppled and fell, smashing against the ground as a bulkhead door closed. The hive was smashed and the ghost of Abraham Lincoln left the hive, ready to hunt some bears. 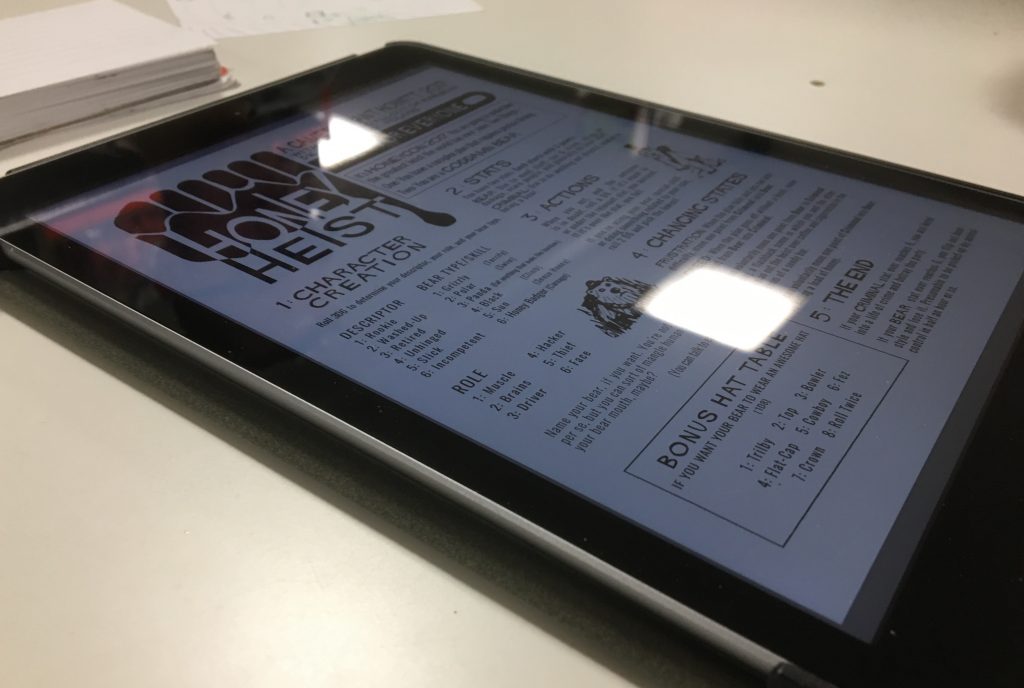 Flashback to a fateful night at the opera. Lincoln’s shot and killed, but while most people thought they saw John Wilkes Booth take the shot, none but Lincoln had seen the real assassin… a bear!

Enraged, Lincoln went on the attack while the panda charged at the way out. When they escaped, there was a deadly swarm of ghost bees and a vengeful Abraham Lincoln in hot pursuit. The rival bear squad were locking down the cabin with all the contestants’ honey.  Merchants fled. The cover band, “The Bee-52’s” were locked down in a protective cage which did nothing to stop the bees.

Flashback again, as the gang met “Polaris”, a polar bear, in Winnie’s. The rival group were actually a second team who were going to help out with the heist. A great idea and another use of the Blades in the Dark mechanics, but I let this slide as it was a cool solution. The bears did end up betraying our thieves, leading to Polaris having the haunted machete planted on him and being driven into the lake after getting terrified.

The players had some difficult decisions to make. Grizzly’s Criminal stat maxed out and he grabbed some honey from merchants, then abandoned the others. He fled on a boat into the lake to wait out Abe Lincoln’s ghost rampage. Panda and honey badger raced to the rival group’s van, getting there just in time to steal it and flee with the dozen jars of honey which grizzly had secured for them. It wasn’t as much as they wanted, but it was enough for now. They drove back to Winnie’s to enjoy their haul.

Back at the lake, a polar bear paw burst out of the water, machete held tight. Polaris had become possessed by the machete and transformed into Jason Bearhees…

Just so you know, that one page and these notes: 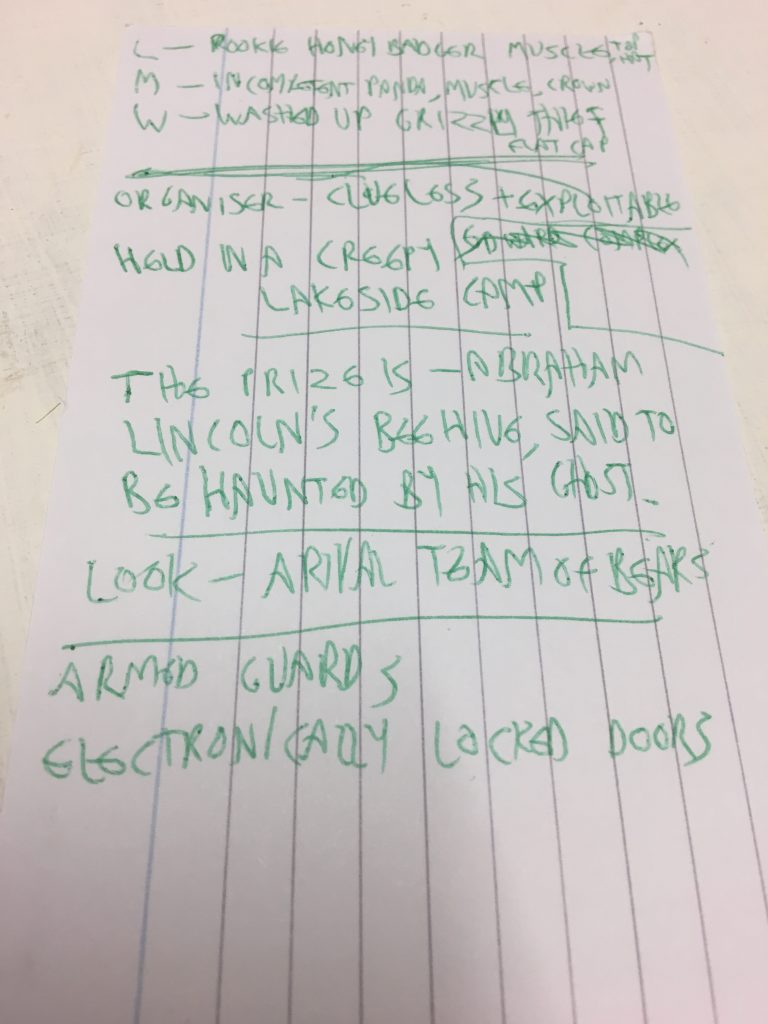 These made a really fun game which played in maybe two hours. I had very little idea about where the game would go and loved what happened with it all. Like One Ugly Motherfucker it was an impulse play and perfect for it.

All you need is some pens, paper and d6’s, along with the free game. I’d definitely recommend it for some daft fun with bears, crime and hats.

*I’ll get to Blades in the Dark soon, I promise…