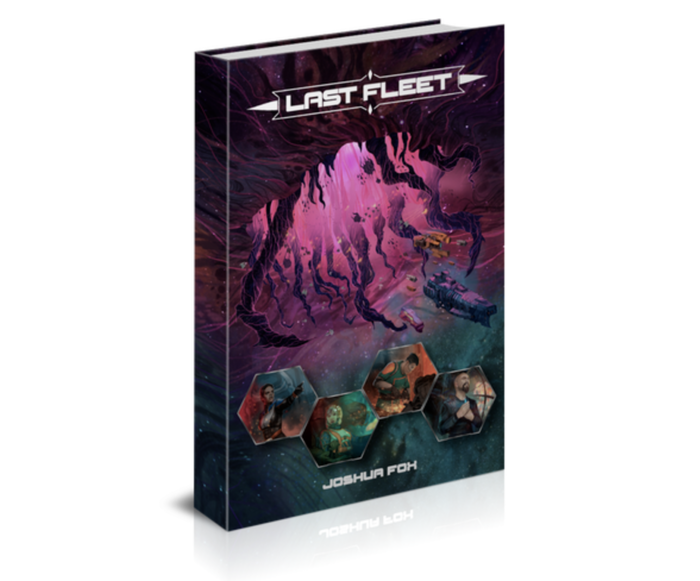 Last Fleet is a game about the last remnants of humanity, desperately fleeing an ominous, ever-present threat who can and probably have infiltrated their fleet. It’s about the constant pressure faced by these characters and the desperate struggle to not only stay alive, but to remain human in all the good, bad and messy ways that means.

Last Fleet, is, as you’ve probably guessed, based heavily on Battlestar Galactica. This is a subject which was used in an official capacity by Margaret Weis Productions, although as quite a traditional RPG, the mechanics didn’t feel like they captured the tone any more than any other game would. It used the Cortex System before it got interesting and seemed fairly flavourless from what I’ve read. This game may not be officially BSG, but accomplishes more with far fewer pages (97 in the playtest rules and 200-250 estimated for the finished product). 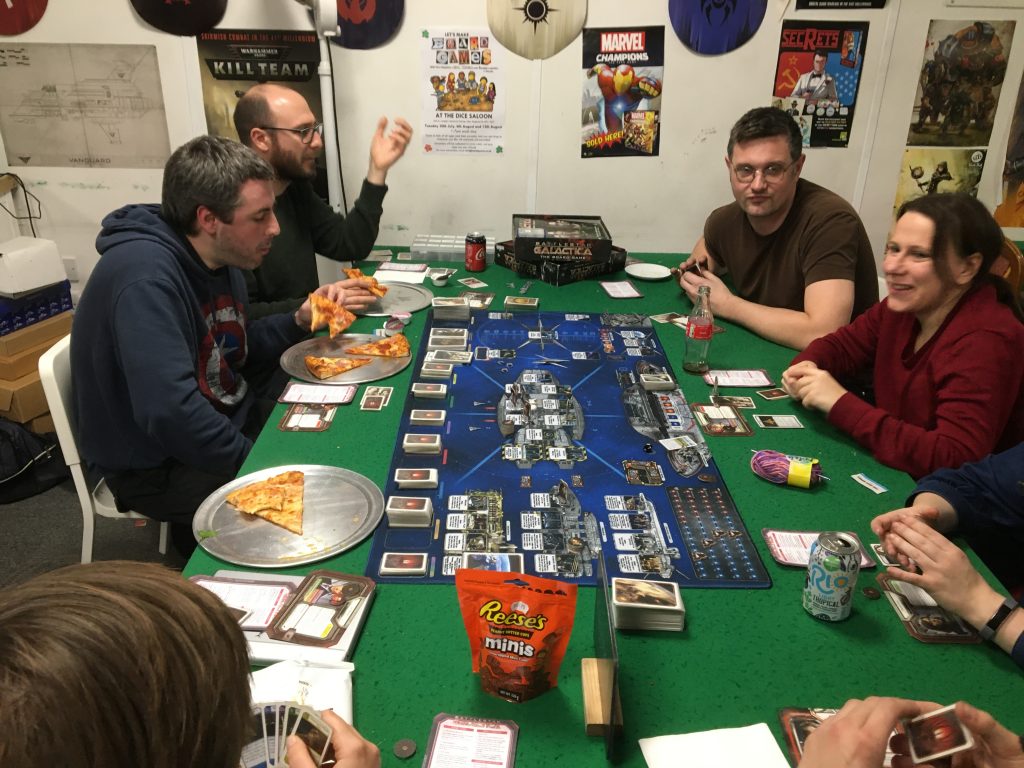 Battlestar Galactica is a television show I’m a big fan of and the board game is still in my top ten board games. The show’s bible by Ron Moore is an incredible retort to the Berman-era Star Trek. It brings up the need for the show not to just be about emotionless space people. It needs to be like a military drama, but focused more on the people in the middle of it all. You should feel as intensely about political and cultural actions as you would about the spaceships shooting the other spaceships. This is why I was peeved that FFG’s license for the board game went and was replaced with a minis game about ships fighting other ships in space. BSG’s bible wanted shaky cams, wanted paranoia, drama and uncertainty. It wanted flawed characters losing their shit and taking the wrong decisions for understandable, human reasons.

I don’t know whether Josh Fox read the BSG series bible and I know that the show didn’t end up entirely like the bible and certainly didn’t end the way it was intended, but it certainly feels that way.

There will be other settings in Last Fleet, but the one in the beta rules is similar to the BSG concept. The Commonwealth was a small group of planets attacked by The Corax; a kind of psychic fungal network who absorb people into their collective and can spit out near-identical duplicates. These copies may not even know they have been replaced until they’re needed by the Corax’s hive mind.

Players are part of the last fleet of humanity who are on the run from the Corax, striking out where they can, trying to stoke the engines, keep themselves sane and find a place they can call home. The system has a Powered by the Apocalypse skeleton, finely tuned to emphasise what the game’s about. PbtA systems, left we forget, favour fiction first and use moves with full, partial and failed results to drive forward the narrative. But there’s a lot that can differ in them. 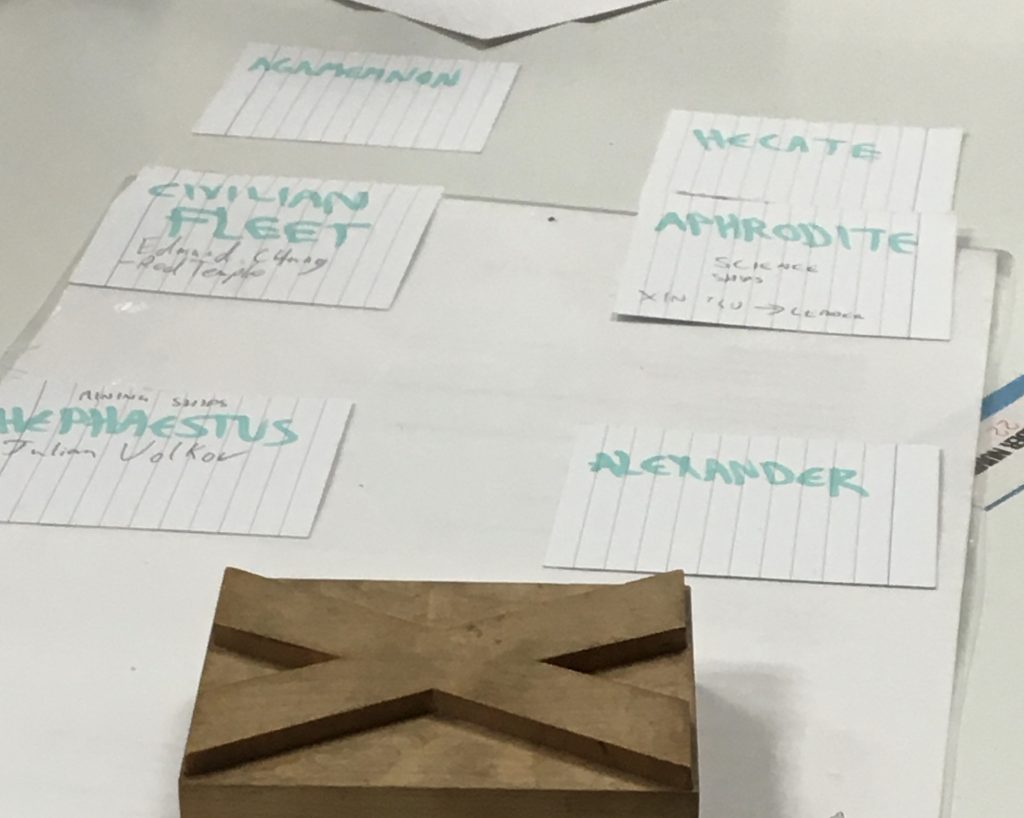 Last Fleet’s first major difference is Pressure. Instead of hit points or any kind of stability track, you have points of Pressure. They start at a low boil and don’t take long to spill over. The thing is, you’ll often be choosing to take points of Pressure whether it’s to modify your die rolls or as the cost of terrible actions coming to pass. You can raise and lower other characters’ Pressure using some of the ‘holy trinity’ of Moves behind this game. Call Someone on Their Shit raises people’s Pressure if they don’t concede to your point. Let Loose is where you fling yourself into easy relief, even if it ends up complicated later, in order to reduce your own Pressure. Reach Out helps you make connections with PCs and NPCs, producing Pressure for you and someone else if you’re lucky. You want to interact with these as hitting five Pressure activates your Breaking Point. Like the Monsterhearts mechanic of the Darkest Self, this is a scripted point where you do something awful. Like Night Witches’ Marks mechanic, they can only be used once and then they’re done, leading you closer to the decision to have your character ‘exit the game’.

There are other moves, allowing you to strike targets, to support people or even to watch helplessly as someone does something. I liked the latter, as you end up asking the person what they’re doing to be helpless while the action was going on. 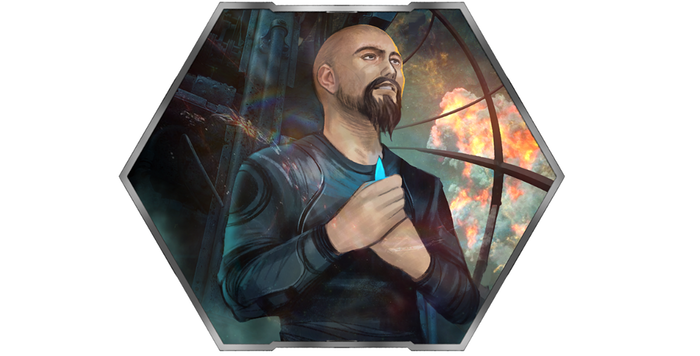 The characters have playbooks based on star signs, which means there’s a lot. From my experience in the playtest draft I’ve seen five in action. The hot-headed Aries, the calm Libra, brutal Capricorn and the traitorous Scorpio make up some of the cast. As a Leo, I quite like them as the playbook of being a leader but without any real authority behind it. Frak, I can’t believe I just wrote, “as a Leo”.

The fleet itself is not reflected in the form of stats for how fast ships go or their armaments, instead you have Attrition and Momentum. The former is how things are going currently, similar to how Pressure works. There’s not a list of breaking points for the fleet, instead the GM has the ominous order to ‘Unleash Hell’ on the fleet. Then there’s Momentum, which is a stat much like those characters have, but they’re for how well the fleet can handle the enemy. In our game it started at -1 and ended at -2. It’s a tricky thing to improve.

Even though the current draft is just a preview, it’s still 90-odd pages and continues Black Armada’s trend of having spectacular teaching tools in their games.

The Kickstarter campaign is only open for a little longer, but already nearing £15,000 compared to the £6,000 goal it originally set. Stretch goals unlocked include a module to add a military focus, a multiverse-hopping city acting as a different kind of fleet and hopefully a scenario about Corax breaking free from their hive mind. 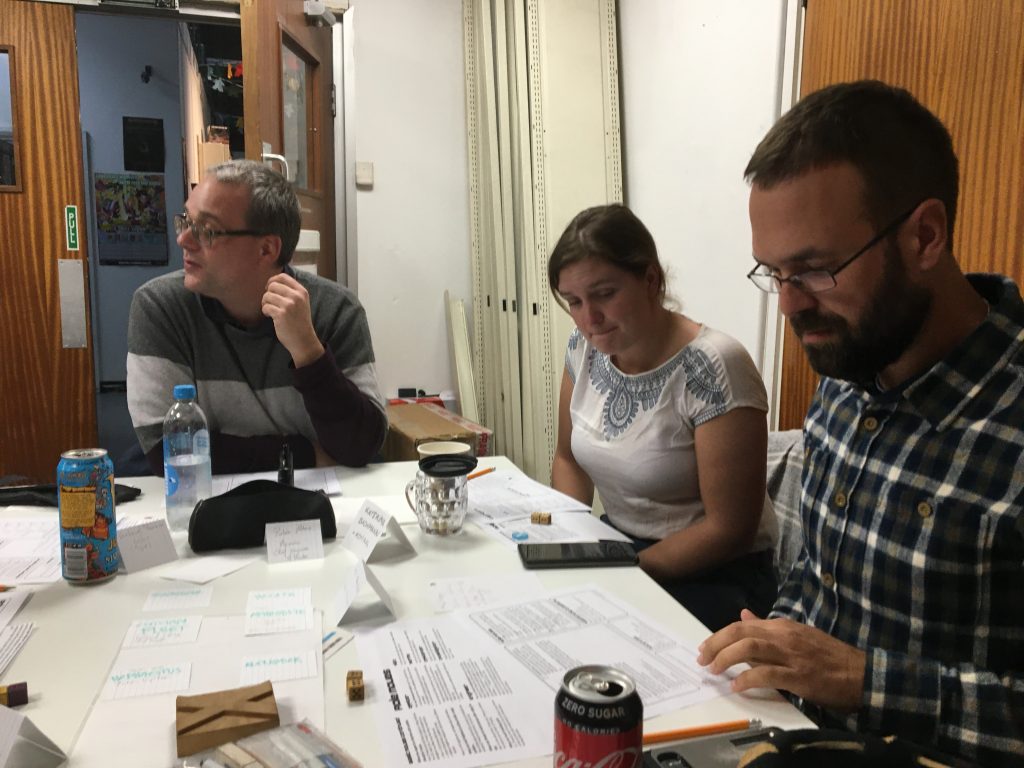 I ran a playtest of Last Fleet at a fortnightly RPG community night I host. Spoilers for the premade scenario in the playtest book, although even with the same characters and setup it can run entirely differently.

The group were mainly aboard the Agamemnon, who were on a deep space mission when The Corax hit. They had been doing hit and run attacks before running into the warship Hecate and several civilian ships. 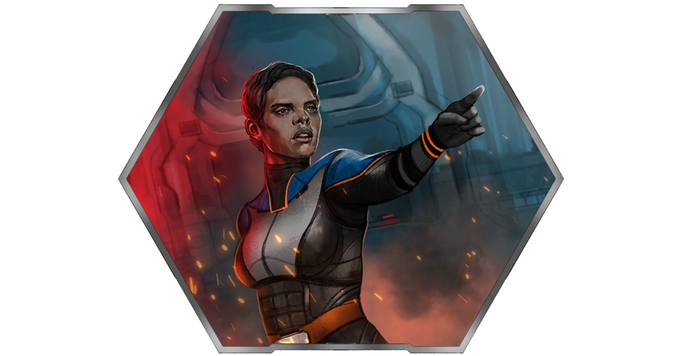 Lorenzo played the hotshot pilot Livia ‘Minerva’ Vega who didn’t like playing by the rules, but was damn good at her job.

Joanna played Admiral Katarina Bachmann, who had been ordering the Agamemnon’s hit and run attacks.

The game started with Vega waking up in Aldana’s quarters and having to do a walk of shame past the other engineers, ignoring Aldana trying to get breakfast. A meeting was called to try and mine a nearby gas giant, with players and NPCs alike all driving their own agendas. The meeting included a religious leader from the Red Triangle and Julian Volkov from the union and Bachmann’s assistant who she kept talking to throughout the meeting. It was decided that Volkov’s mining ship, Hephaestus, would be modified to harvest resources from the gas giant. This required customisation from scientists and engineers, overseen by Catan and Aldana. Vega chilled with her fellow pilots Pyro and Doghouse. Pyro was beginning to lose it from spending so much time not shooting at things. 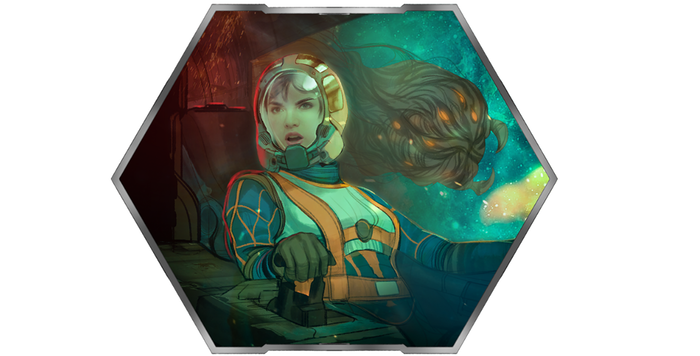 Pereira shared some of his hidden supply of brandy with Volkov,reaching out and discussing their wider concerns and their hopes for this mission.

Catan woke up the next morning in a bunk on the mining ship Hephaestus, hands covered in oil and a spilled toolkit on the floor. In the distance, an explosion rang out, nearly killing Aldana who valiantly tried to save his project but was incapacitated by pain from his burns.

Dr Xin Zu from the science ship Aphrodite called in that there were materials for three bombs which had been stolen. At the same time, an engineer entered Catan’s room to see him covering up hiding the obvious tools of sabotage. Catan panicked and killed her, radioing in a false message from her, trying to pin this on the religious sect, The Red Triangle. He tried backing this up by launching an empty escape pod and claiming the saboteur was aboard.

With the news of there being potential for other bombs, Bachmann had life support cut off from all the nonessential locations and crew quarters. This could help them conserve power usage while keeping people together in easily contained locations. Once this was done, an explosion lit up the centre of the Aphrodite, driving it slowly towards the Hephaestus.

Vega and her fellow pilots Pyro & Doghouse took the escape pod to the Agamemnon and Bachmann ordered Catan back to the ship, telling him that he needed to examine the empty pod for spores. Pereira commanded Captain Kowalski of the Hecate to fly next to the Aphrodite and direct it away while teams put fires out. Aldana shook off his injuries and was torn between fixing the fuel skimmers which had been damaged or helping with the search for the remaining bomb (although there had been confusion about how many bombs were left). 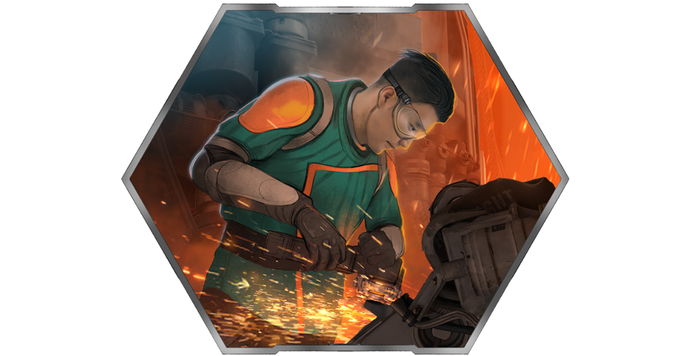 As Catan’s ship drew closer to the Agamemnon, Admiral Bachmann gave the order to detain and if necessary kill him. Doghouse texted Catan to warn him, using a familiar tone despite Catan not remembering ever speaking to him. Catan realised that whatever he was failing to cover up was something Doghouse was in on. The pair managed to keep Vega and her new retinue of marines from instantly killing Catan, but the Corax spores inside Doghouse started to activate, causing him to gestate more spores while opening fire on everyone. Vega took a solid hit to her back and from the ground managed to take Doghouse down. Catan helped, keeping his cover but ending up arrested. Aldana lost his cool, but managed to work with Pereira to locate the final bomb on the exterior of the Hecate.

We had some quick epilogue scenes to show moments from later in the ‘season’:

Vega waking up in the hospital, asking for Catan.

Catan standing trial for treason, just as the verdict was about to be given.

Aldana as the only pilot on the Hephaestus, driving it towards the gas giant.

Bachmann and Pereira having tea and a game of go. She goes to her quarters, takes some pills and goes to sleep.

Pereira on the bridge of the Hecate. “Systems nominal, fuel is full… let’s jump!”

It was an incredibly tense game. We shot into the action pretty quickly, so there was little opportunity to make use of any of the calmer actions. As this was a short session and the playbooks were all directly linked to the main threat, I wonder if a longer session or a more indirect playbook might have allowed more moments outside of the drama. The tension between the group and the threat of the bombs kept everyone on their toes through the whole game, the Pressure of the characters and the Attrition of the fleet were constantly on edge, threatening to break everyone, making them ripe for invasion from the Corax. The Corax themselves only really appeared as a distant threat and as Doghouse was activated.

This is a fun game that thrives off of tension. It worked well for a one shot but looks like it’ll sing as a campaign.

For now you can still back it on Kickstarter and you can get the quickstart rules there. Black Armada also have a Patreon, found here. If you like Battlestar Galactica or any kind of science fiction where flawed characters are putting everything against the line for their survival, then you should check out Last Fleet.

ROLE-PLAYING PODCASTS
Be the first to comment!
Leave a reply »