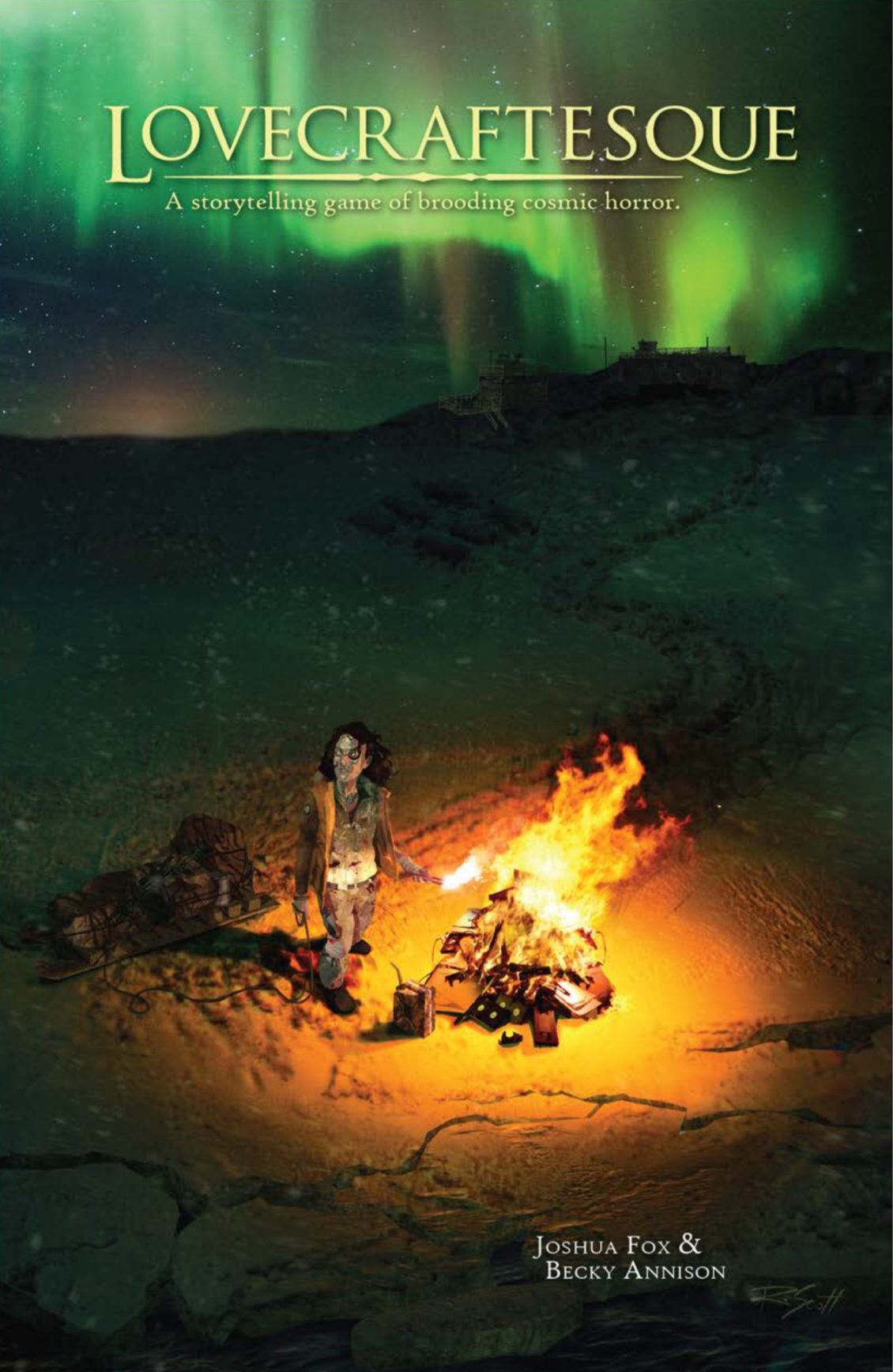 You are alone. There are no other investigators, no weapons and no authorities who believe you. All you have are your wits and the certainty you know what’s going on… at least, as much as a human mind can know such things. You pull open the secret door and see the stairs down into darkness. Bodies are reaching out from the walls, slick and hopefully only stone. You descend into the dark, knowing you will probably never come back.

Lovecraftesque is a role-playing game for 2-5 players, telling stories of Lovecraftian horror with a sole character shared between the whole group. It reflects the themes of Lovecraftian/cosmic horror and has players build a mystery together which none of them have prepared and yet feels amazingly like it was always meant to be.

Players are split into three roles, which rotate with every scene. The Witness plays the player character, our protagonist. She will only be able to talk about what the protagonist thinks, feels and does in each scene. This character will be investigating the situation they find themselves in. The Narrator presents the scene, plays the supporting characters and antagonists, they answer any questions the Witness asks. The rest of the players are Watchers, who act almost like secondary Narrators. The Narrator is encouraged to ask them questions about the scene, to play supporting characters when there’s more than one present and to add little bits of theme to the story. 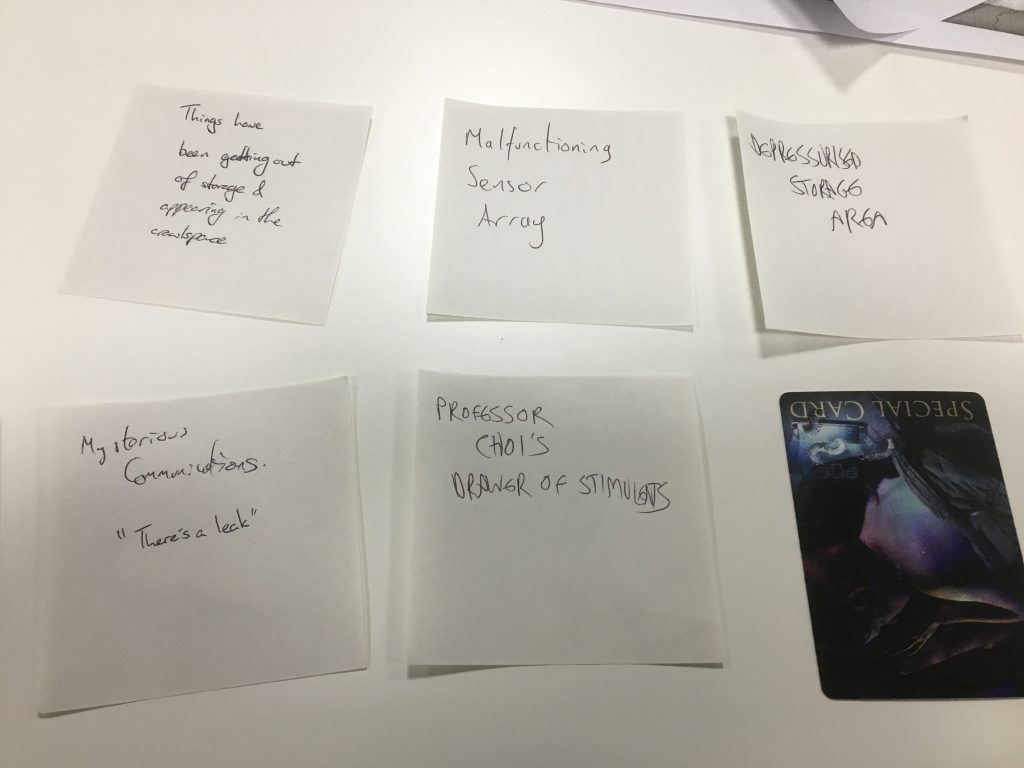 Together, these roles make the world and push the investigator through it like the doomed Lovecraftian protagonists of old. They don’t have to be the effete white, wealthy New England men of most Lovecraft stories, either. One thing Lovecraftesque takes great pains to do is to reappropriate this brand of horror and make it vastly more inclusive. This is something I am totally down for, both in games like the works of Fantasy Flight and in the popular culture through films like Cthulhu and Lovecraft Country. There are even really good essays in the book about representing race and mental illness respectfully in Lovecraftian horror.

Anyway, back to the roles. You each have strict rules with making scenes. There can’t be any direct violence and there can’t be anything supernatural. I know that sounds odd in a Lovecraftian horror story, but there’s a reason for this. Each player gets a Special Card, which is a plot element used to break those rules. “Warped Bodies” allows you to bring this up briefly early on, but then it becomes more direct and more intense as the game goes on. Once a plot element is introduced (as a Narrator or Watcher) then it’s on the table and an active part of the mystery. This focus means that when people get killed or harmed somehow, it’s all done through the lens of these Special Cards. But you won’t all know what they are to begin with, just your own. The mystery is kept mysterious. 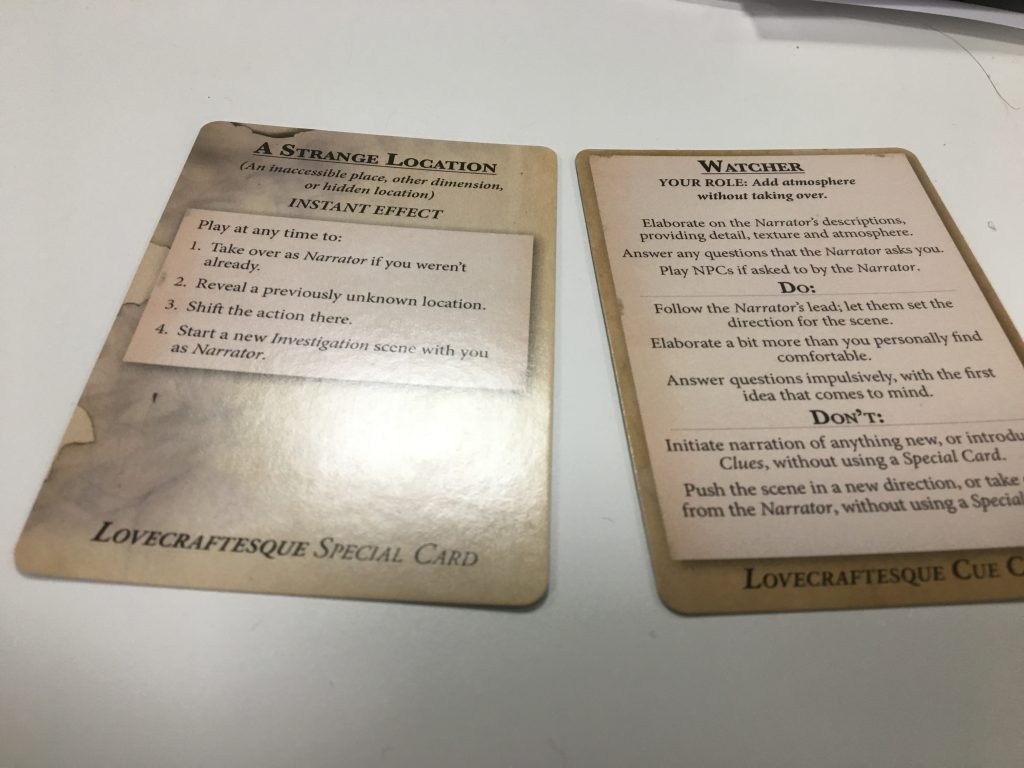 There are three acts you play through in the game. Act One sets everything up and puts limits on a lot of the cards. You see cracks in the walls, hear tales about how insects took over one of the floors in the hotel and exterminators haven’t been able to do anything about them. Your boyfriend is missing from his dorm room. Act Two allows things to get a bit more wild. After one scene passes, at any point people can decide that the protagonist advances into the finale. If you dally for too long, looking for clues, they’re taken into the finale, kicking and screaming. Act Three changes things up further. You’re no longer playing through a whole scene like it’s a scene in a book or a story. Act Three is one scene which you all share. You take turns picking one of the three roles, narrating a tiny slice of what your protagonist is doing, what the world is doing or embellishing what’s gone before. You spiral round and round, a couple of sentences at a time, almost poetically, until you reach the Final Horror. That’s where the mystery is laid bare. It’s where everything comes to an end for the story. 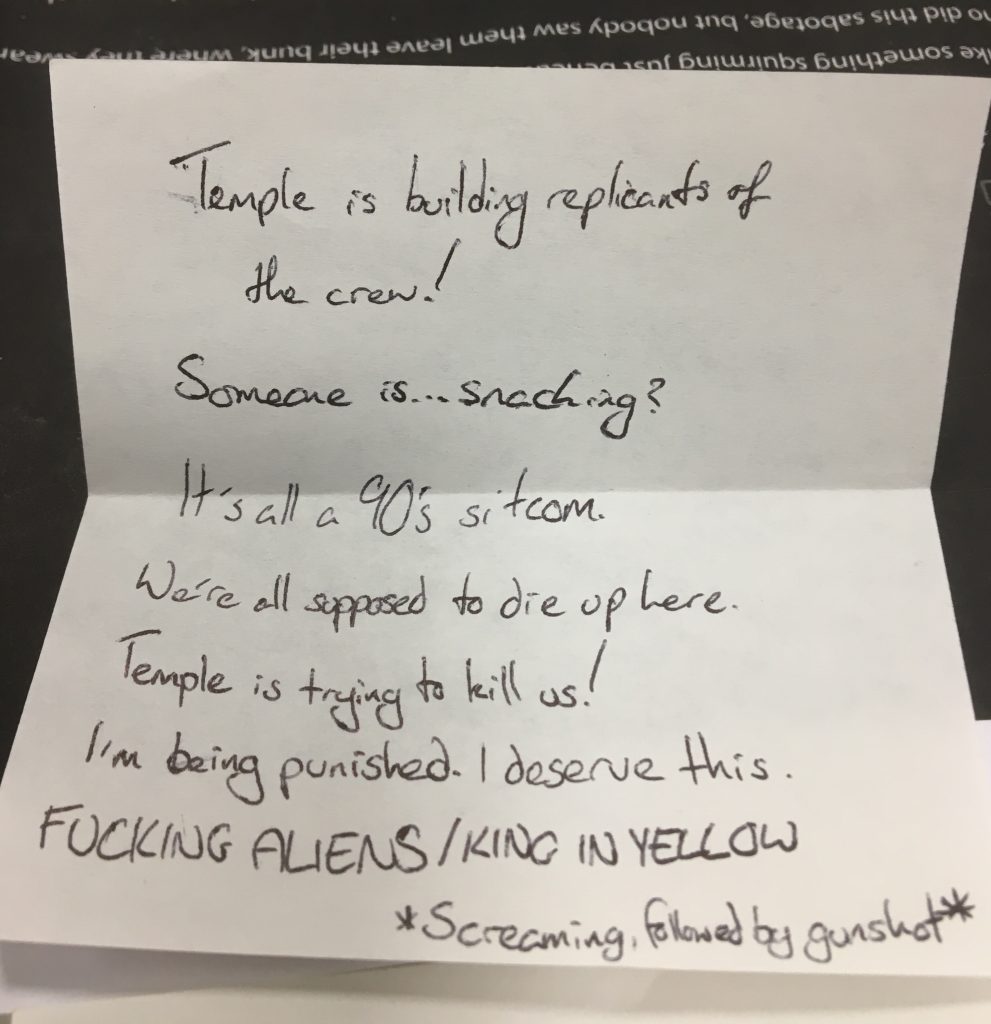 It’s intense and makes for an amazing experience, almost exhausting by the end. There are a few tools I’ve not mentioned in the above description, which really help to pull everything together. There are clues which are found in every scene and written down on card. Each one will build the tableau used in the mystery. The Narrator tells you which element of the scene the Witness played was. Sometimes it’s a bit of a surprise with what the Witness went through, other times it’s a foregone conclusion. 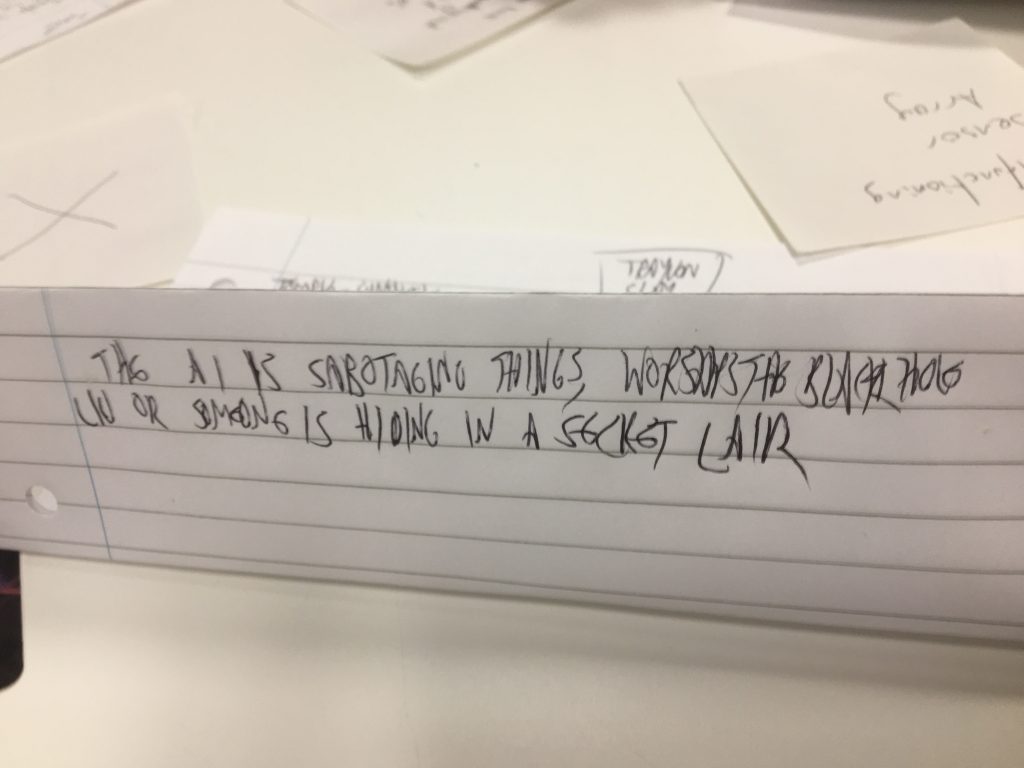 The other tool is one of those beautiful things you get in some RPGs. It’s Leaping to Conclusions. After every single scene, you get a bit of paper and privately write down what you assume is going on. You’re to be fairly broad, to (as the process is called) leap to conclusions and then adapt that with every scene after that. This means that you’re playing towards what you think is going on, as is everyone else, but as the game goes on you adapt your plans to what everyone’s making. You tighten the net and bring everything together in a story none of you created but all of you contributed to. The mystery existed and for the story’s sake, always did, even though no one made it beforehand. It’s a beautiful way of creating a horrific story. 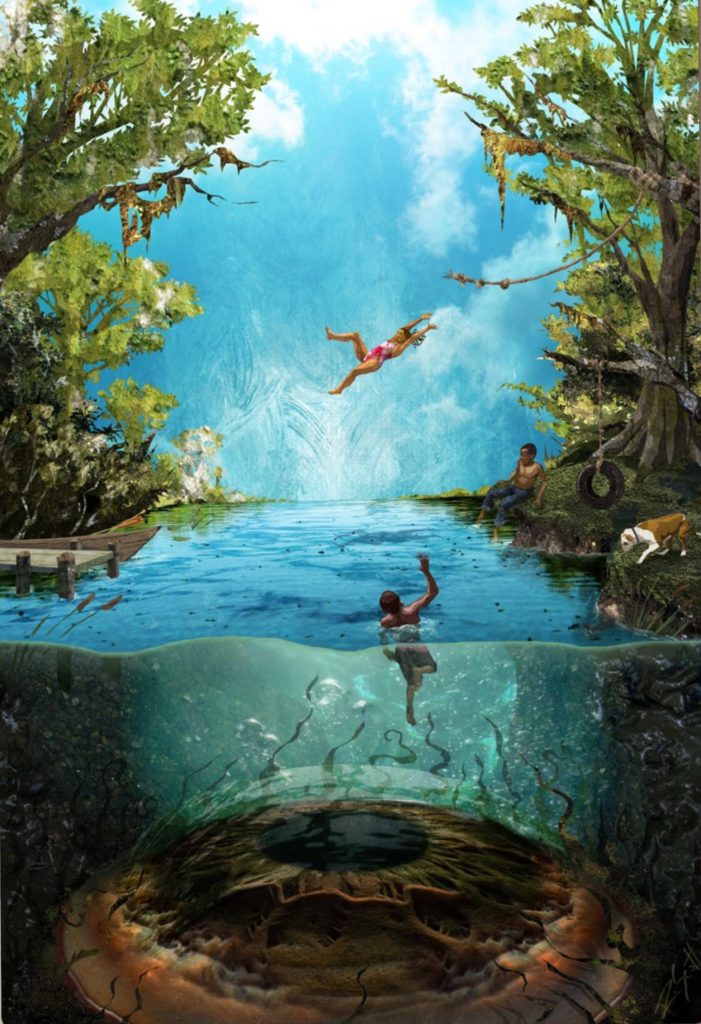 The book is fairly big, despite the rules being pretty simple. The rules are explained, then drilled down to show you why they work the way they do. There’s also a teaching guide so you can run the game without preparing, without even reading the book beforehand. It lengthens the game a little, but is a fantastic tool and I love it whenever games do this. There are a ton of scenarios from the authors as well as RPG greats such as Jason Cordova (The Gauntlet), Mo Holkar (a ton of LARPs), Jason Morningstar (Fiasco) and Graham Walmsley (Cthulhu Dark). Each scenario contains a short description of the lead character, the locations and supporting cast. Then there’s a premade list of Special Cards which make up the components of the supernatural which may be encountered. I love that these playsets exist and give good guides for how to play a game if you don’t want to make one from scratch.

The book also contains poetry and lists of inspirational ideas for making your own scenarios for Lovecraftesque. There’s a mention of the X-Card as a safety measure, which is always useful in a horror game like this. 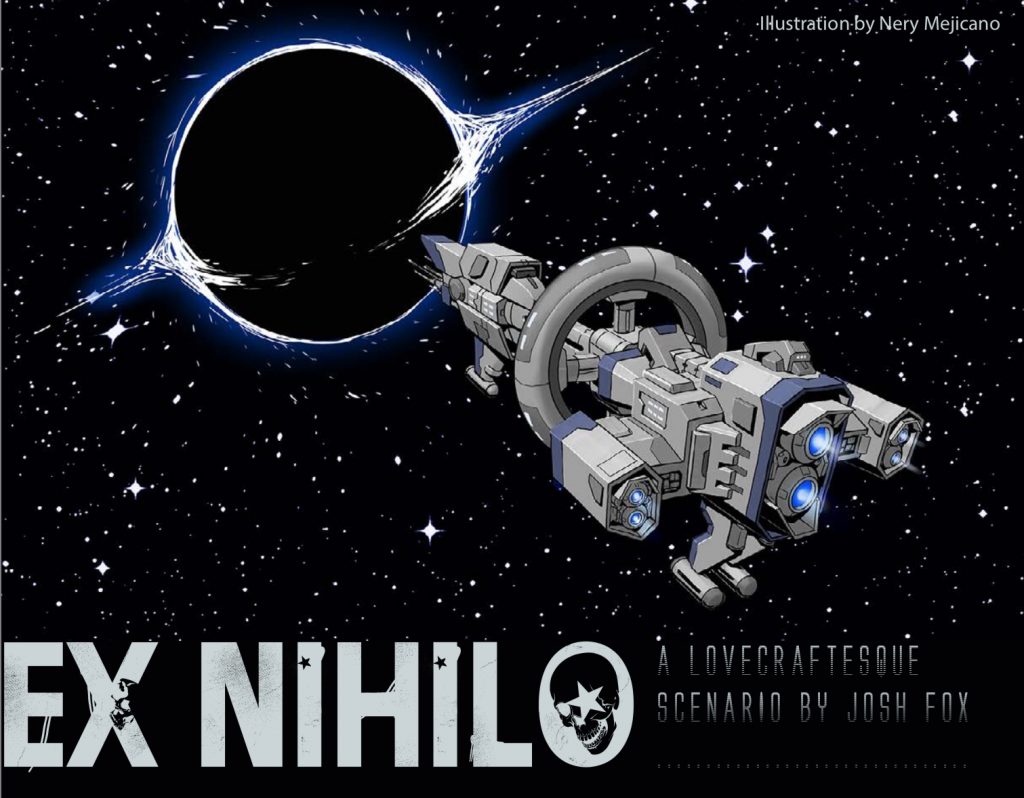 You need index cards or bits of paper to record clues and notes about the character, as well as the Role and Special cards. I backed this game to a level where I had the physical book, cards and PDF. The quality of the cards is really good and definitely recommended. If you didn’t have either the physical cards or printouts, it could be a bit difficult to run the game, but not impossible. There are also a few scenarios online, both on the Black Armada site and in The Gauntlet’s monthly ‘zine, Codex, specifically Ex Nihlo in Codex Starlight and Pizza Time! in Codex Dark.

I’ve played Lovecraftesque three times so far. Twice I’ve facilitated by using existing scenarios (Ex Nihlo by Josh Fox and Dark Pledges by Kira Magrann). The other time someone else demoed it at Dragonmeet and we made a great story in two hours from scratch.

The first game we were a washed up celebrity on a space mission to the edge of a black hole. The second game was the from scratch game where a deteriorating hotel was hiding something much more horrible in the walls. The most recent game had us play a black student in a mostly white college, where a frat seemed to have kidnapped our boyfriend.

In the game made from scratch we created a widow who was running out the last of her late husband’s money in the 1920’s, trying to find a new fortune. She was impetuous and trying to find some line or work rather than simply marrying into it. The hotel she was staying in was falling apart, with some old people whose minds seemed to be elsewhere. Insects had overrun one of the floors, strange music was playing in the distance and something had crashed in the nearby park several centuries ago. Our protagonist pieced together the mystery, only to get taken out by one player’s Special Card which meant that we ‘replace the protagonist’. She’d poked too far and the old soldier she’d pursued a flirtation with went searching for her. He took on the descent into darkness instead, eventually finding her as a host for the alien insects which had arrived in the crash landing years ago. It was horrific and wonderful, seeing this centuries-long mystery which had been there all along, even though no one prepared for it.

This is hands down one of the best systems I’ve seen for running Lovecraftian horror. It deals with the subject matter and the people at the table respectfully and beautifully weaves mysteries together in a more effective way than I’ve ever seen before.

User Score
You have rated this
0 likes
Reviews