by Charlie Etheridge-Nunn on October 6, 2018 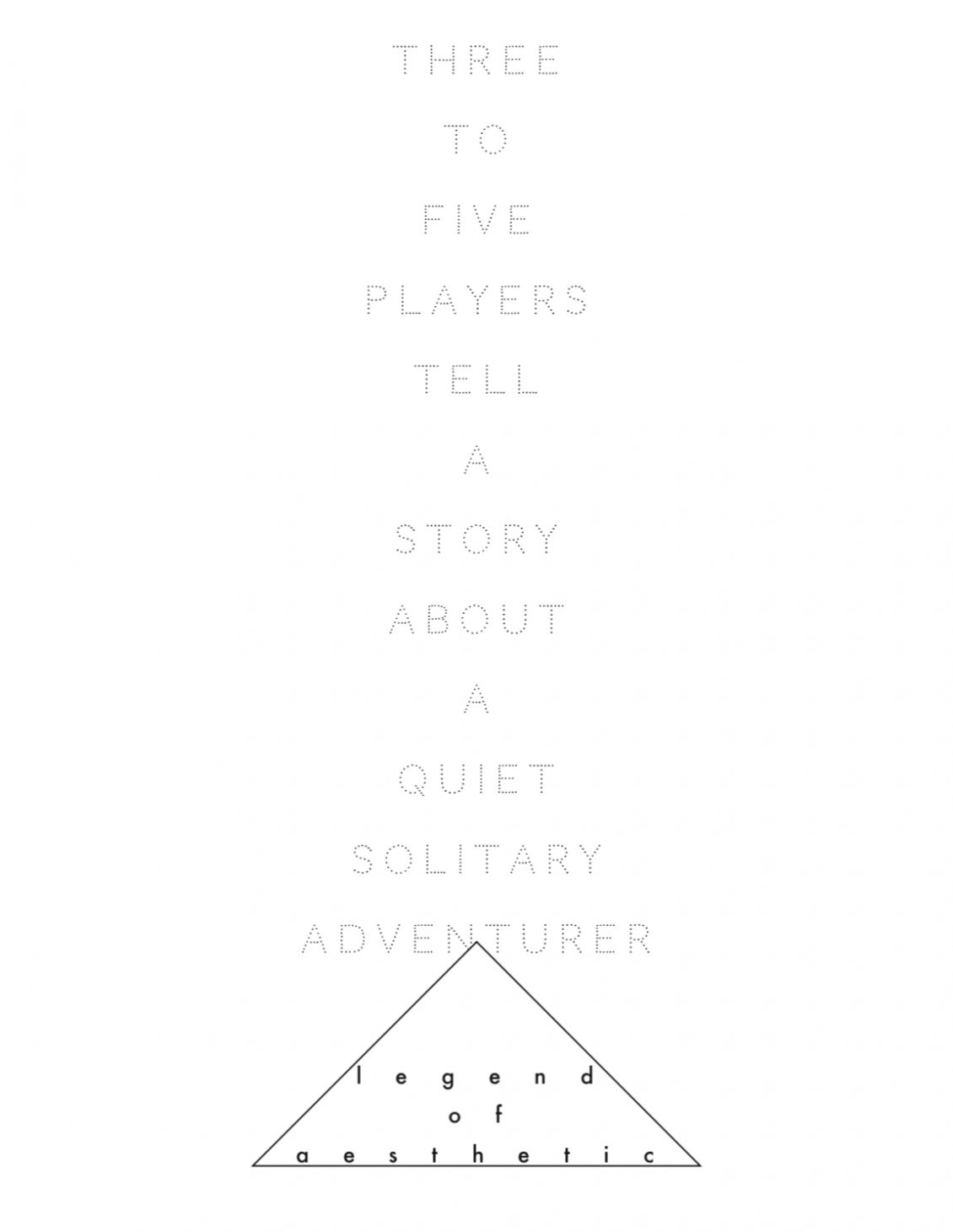 Our first shot is of our hero; a mothman in robes, with a single deformed wing. He’s riding through the woods on a wounded deer, arrows sticking out of it. The deer crashes to the ground and our adventurer closes its eyes before turning to face the ruins. He knows he has to climb to the light, and the ruins will show the way.

He sees his reflection in the water and blue glyphs hidden underneath. There are hooves in the distance, closing in. Our adventurer tries to touch the glyphs in the water, but they’re already upon him. Two centaur-looking creatures pursue the adventurer, who leaps up onto crumbling pillars which were made as launching platforms for his kind.

Atop the pillar, our adventurer draws a sword and we cut to the red of the setting sun as we hear the fight below. In the reflection of the water, our adventurer is seen cleaning his blade, shattering the reflection by dropping the cloth in the water. A butterfly lands on the edge of the blade, glowing a powder blue. It flies away just before a spear is thrown past the adventurer. A cloaked cricket pulls another spear out of its pack before a strange shadow kills it. The shadow gestures to the mountain and the moth wanders towards it as the stars start to appear.

There are old spires made of brick, each with some of the glyphs we’ve seen before in the river. He sees the first signs of snow and looks behind him to the ruins, where he can see torches. The snow and wind pick up, causing a small avalanche from higher up the mountain. Our adventurer hides in one of the old spires and hopes desperately that it’ll hold up against the snow.

Our adventurer puts his sword away and climbs up the mountain, picking up his pace. He can see the glyphs through the snow, roughly lighting the way. We cut ahead to the adventurer hiding in an overhang in the mountain, eating a small meal. We cut ahead again to the bright white of the snow on the mountainside and our adventurer’s head pops out from underneath it. He lifts himself out and can see more of the centaur creatures below. They attach spikes to their hooves, in order to start their ascent up the mountain. Their hooves smash through several of the blue glyphs as they go.

The snow begins to melt, with water flowing down the mountain past our adventurer and his pursuers. He looks up the mountain with a spyglass and sees a temple in the distance. He can hear the sound of a flute and tried to clamber up towards it.

Once he arrives at the temple, our adventurer passes a pair of statues which look like butterflies. They woke as the centaurs got closer, sounding like stone scraping against stone. They drew weapons and our adventurer ran past them into the temple, through a door and into the safety of a strange tunnel. A spear punched through the door, reminding him to keep going.

He ran through the darkness, falling through a fragile, crumbling brick floor into a cavern. There was no way to know where to go, until the butterfly fluttered down and started travelling ahead, lighting glyphs on the floor as it went. Our adventurer followed, making their way towards a chasm which led up to the light, but also down into more darkness. There was a rush of air going upwards and our adventurer realised that those of his kind who could fly would use this to get up the mountain. He looked at his deformed wing, which always kept him behind. He grabbed his robes and held them like a makeshift wing, flying up and up, into the sky, onto a small clearing.

At the bottom of the hole, a single centaur remained. He was beaten, bloodied and scowling at the passage. He then took out spiked gauntlets and started the journey upwards.

Our adventurer heard the distant flute sound and walked through a forest, towards it. Some of the leaves on the trees were a bright blue and several moved of their own accord, joining our adventurer’s butterfly companion. They coalesced around a large tree and the hut atop it. There was a figure in purple at the top, playing the flute. The butterflies changed colour as they got close to it. Our adventurer leaped from tree to tree, trying to get up to the figure.

The figure in purple looked like a large butterfly and handed the flute to our adventurer. It pointed in. The direction of a wall covered in glyphs. It was then our adventurer realised the glyphs were musical notes. He climbed down and played the notes, which opened the wall up to the beautiful creek and the light beyond. He could make out the form of a female butterfly and a glowing orb on the other side. 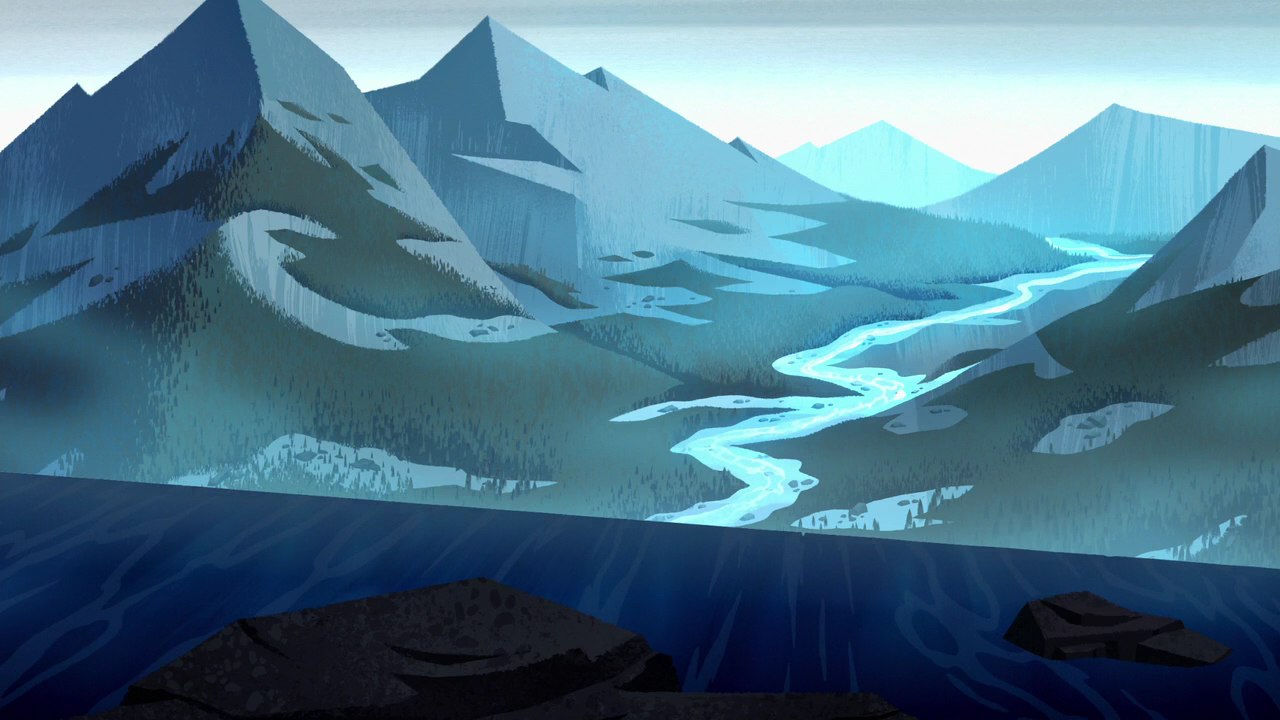 So, you might wonder what on Earth you’ve just read. This is a slightly polished, condensed account of Legend of A E S T H E T I C, by Jackson Tegu. The game is one of his Patreon Treasures, which are released generally one or two a month. It can’t be acquired another way.

The game’s rules are short. I’m sure I’ve already written more words about it in the story and this review so far. You come up with an adventurer and a quest. You get the main deck and one terrain deck, shuffle them and someone sets the scene.

Turns are played out in whatever order you want, or more likely whatever order feels appropriate. You take one card and discard it from the game. It’s never coming back. You play the other card and narrate a short moment in the scene. Think of it like a panel from a comic or a single moment on the screen. We kept centring in on Samurai Jack and Usagi Yojimbo as points of reference in our game. It also brought me back to the sense of exploration and wonder I experienced in Breath of the Wild, but in an almost more poetic form.

The leap up onto a pillar.

The sword being drawn.

The sun in the distance as we heard the fight.

The reflection of the fight in the water.

These were all beats in our story, all people’s turns. 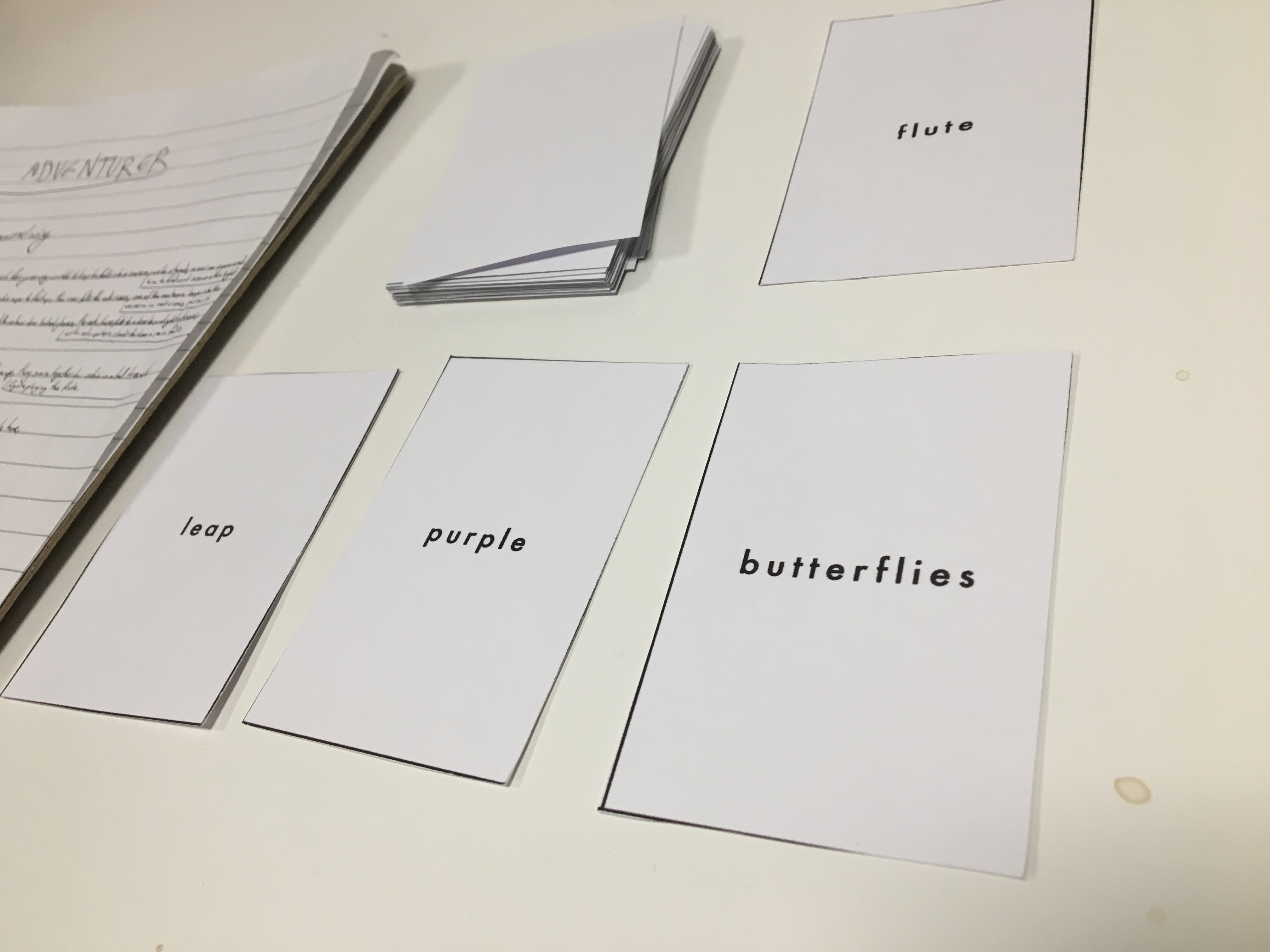 After everyone’s taken a turn we get the cards which were played and shuffle them into the deck. This way the aesthetic of the story is built as we play. Cards are exiled from the game either without ever appearing or after their use is done. I only played ‘map’ once, when the cricket was following it to the ruins. ‘Glyph’, ‘Blue’ and ‘Butterfly’ kept appearing again and again, throughout the game.

The terrain decks each get added to the main deck as your adventurer naturally arrives in those locations. This is great for introducing new plot elements, changing the scenes and refreshing the deck which will be getting pretty small. Soon enough it’ll be a rare treat when something new appears and gets used. The butterfly or the glyphs will become an old friend. Sometimes you’ll be torn when you have to discard one of two cards which you’ve loved seeing reappear throughout the game. 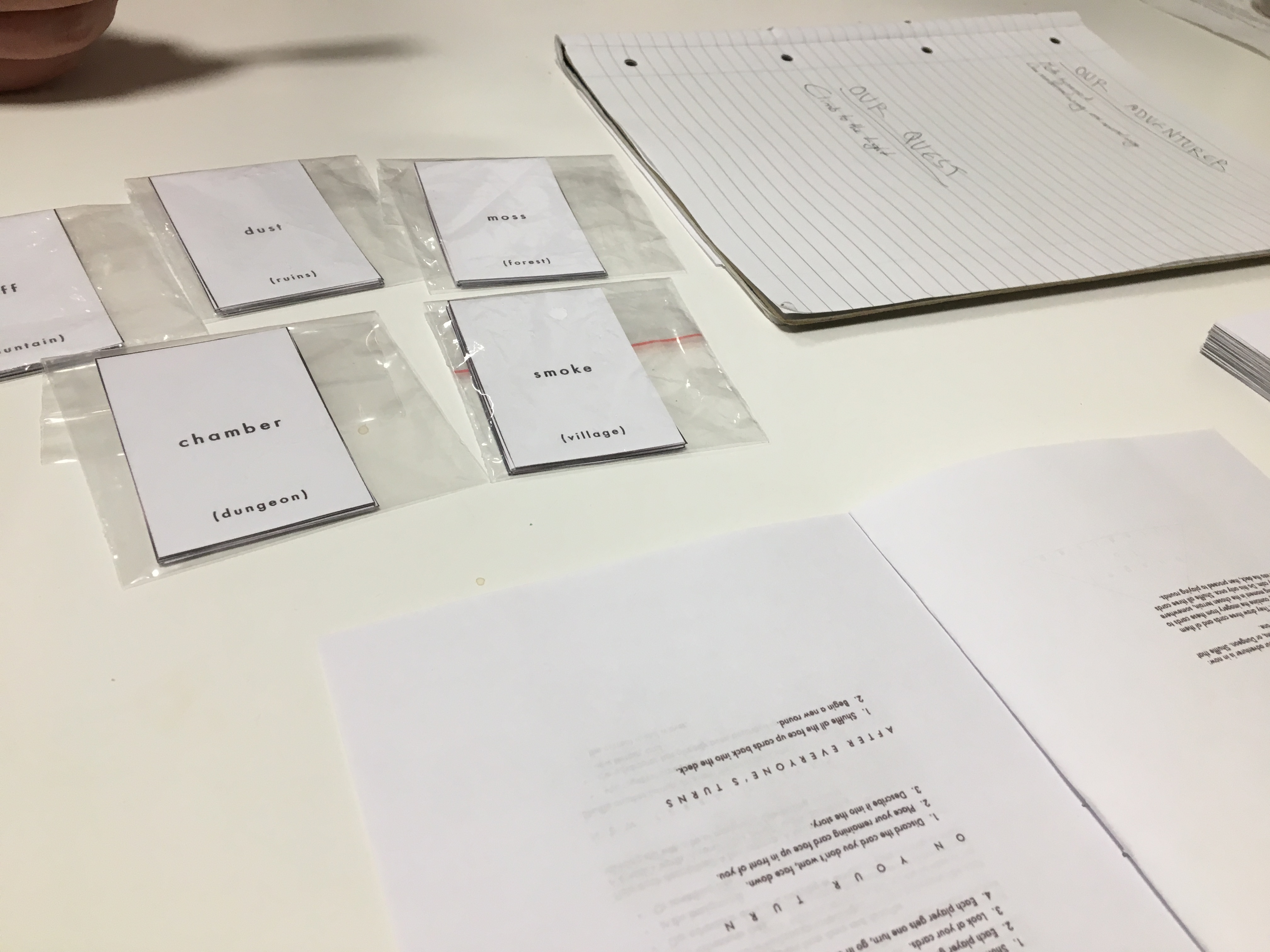 There was almost no dialogue in our game. I think three lines were spoken throughout the whole thing. It wasn’t necessary to convey anything in words, the aesthetic was enough for our adventurer. We were also a little stumped initially when we were working out a suitable adventurer or quest, but once we got our minds in the right place for it, everything fell into place.

This game enraptured all of us and built a distinct visual language which was perfect for the story. The use of the light, the glyphs and the music all worked for us but will be completely different the net time we play the game. 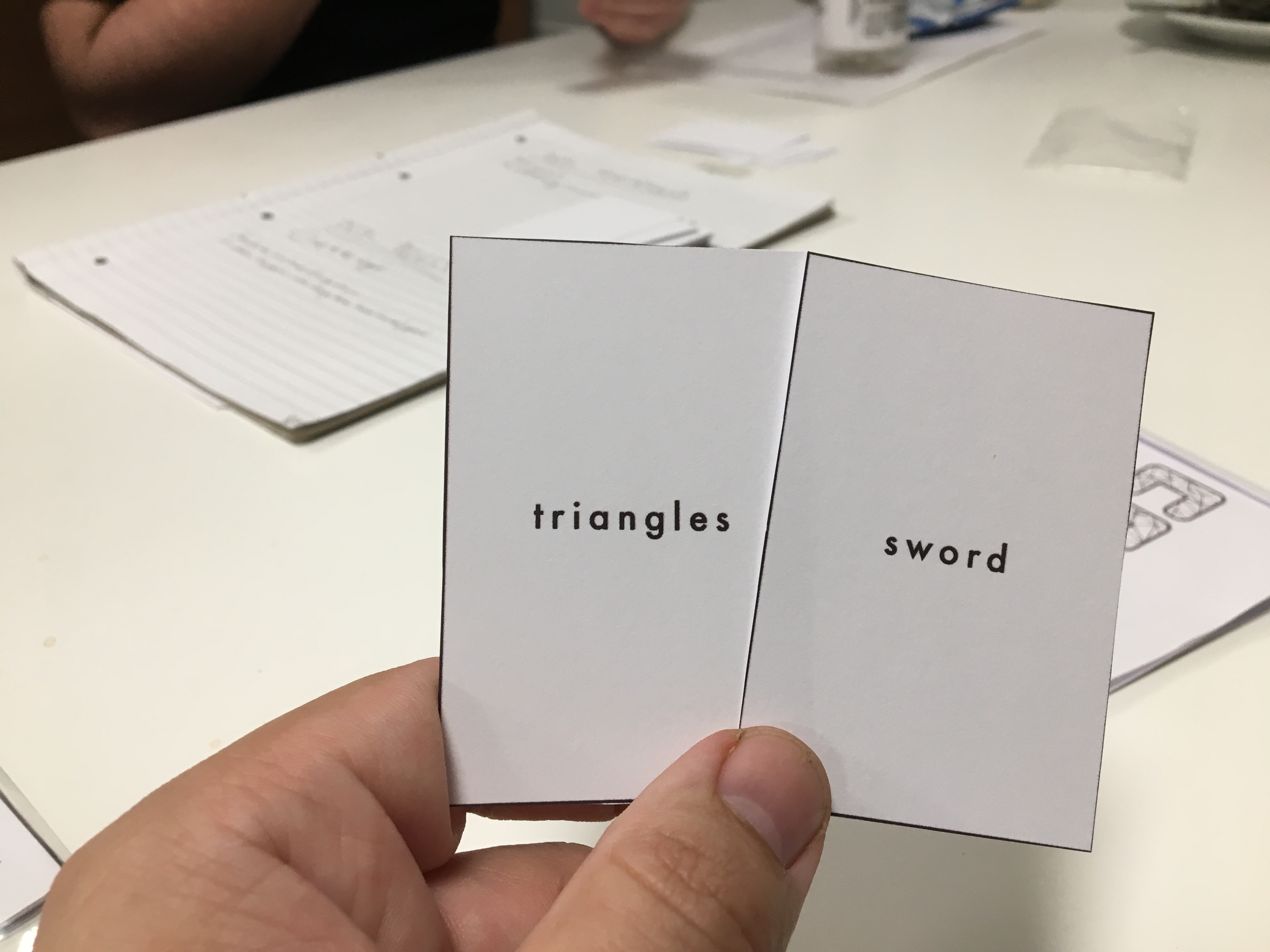 I’m really pleased I got to experience this game and would recommend others do, too.

At the moment, Jackson Tegu has a Patreon where he offers up treasures like this each month. It can be found here and includes a veritable ton of games.

Jackson’s been talking about how to better handle getting his work out there on his Patreon, so I really hope Legend of A E S T H E T I C gets out there for more people to play. He does offer up some games for purchase on his site.

Jackson mostly produces short-form role-playing games, but sometimes there are other documents.

The Michelangelo di Lodovico Buonarroti Simoni Finishing School for Recalcitrant Art is one I’ve used a lot in my own work. It’s a productivity guide with placements for outstanding tasks, questions, things that are known and even how you’ll celebrate finishing your project. I admit with my own Lightning, I didn’t think about the latter part at all. I used the tool to help push me to the end of my novella and am using it for the sequel. Here’s what it looked like (admittedly after living in my bag for a while, which is why it’s all beaten up) 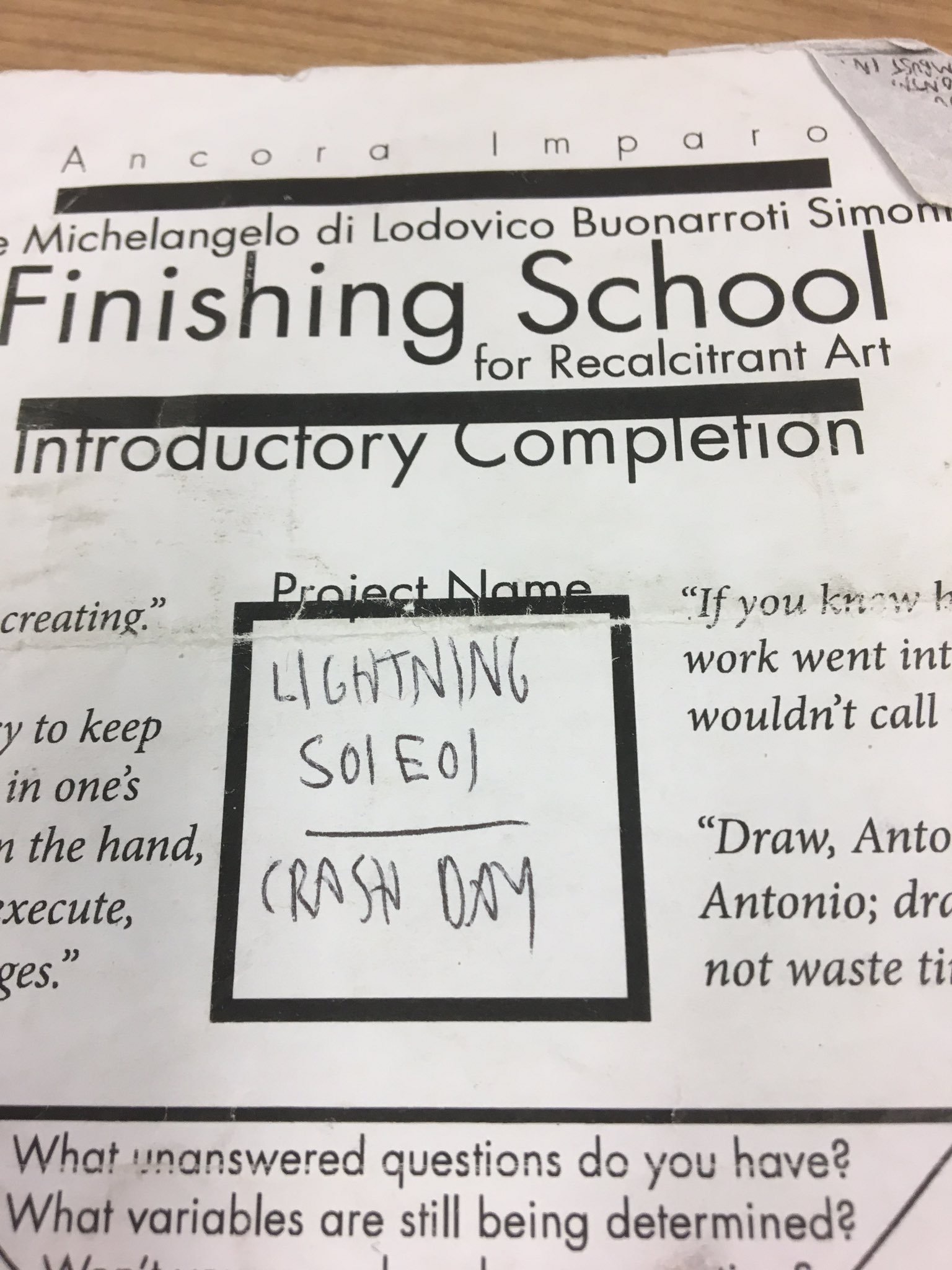 Thanks to Jackson Tegu for making the game, Mark and Lee for playing and Vinnie for not only playing but transcribing the experience so I didn’t have to.