Ash as Remy, a drunken ex-musketeer with a lot of fancy hats

The city of Carleon was beautiful and enchanted. It was said that it appeared out of the blue one day, surrounded by beautiful lights. This was Avalon, a land of fairytale oddities, so no one questioned it. The heroes had a few things to sort out:

Vanya had been in an enchanted sleep. After Finn bargained away a share of the magical crown the heroes were questing for, Vanya was woken up by the Eisen bounty hunters. There were a few questions about Vanya’s harvesting of Hexenworker body parts for his potions. He admitted he used them, but out of necessity and he never killed them. Galina thought the bounty hunters were going to harvest him. Effy put her hand up and said that bodies are big, potions are small, so what’s up with that? Also why did he do all this?

Vanya ducked the questions and was kept with the group anyway in their quest. Rather tactlessly, he offered some potions and was met with odd looks. He said, “It’s not like they’re all containing a 35 year old accountant with a magical talent.” Which was worryingly specific.

Finn’s dissenting crew were dropped off, still moaning about Finn and his father. They stole a lot from the ship, leaving five raises of items which Lee determined were: diamonds, silk, money, wine and spices. He was able to bargain with six wealth’s worth of things but aimed for specifically a cheap crew. Dregs. Lee was told to describe his ideal crew:

Then the rest of the group had to make the reverse of each of these as traits for them:

Amy – Unqualified (they were tourists mistaken for sailors)

As one final piece of housekeeping before we ventured forth, Galina rolled to understand the Vaticine box she’d stolen. There were stones inside which resonated with a pure energy. They could cleanse water and remove the potency from alcohol (Remy swore at that) and speed up the growth of plants. Jacob pointed out that they weren’t all there, only four of them.

We researched the statues of dwarves, which looked like they would be the next best place to find the etched map. Jacob had us do homework which was to write up from memory the story we’d created last session. Here are the findings: 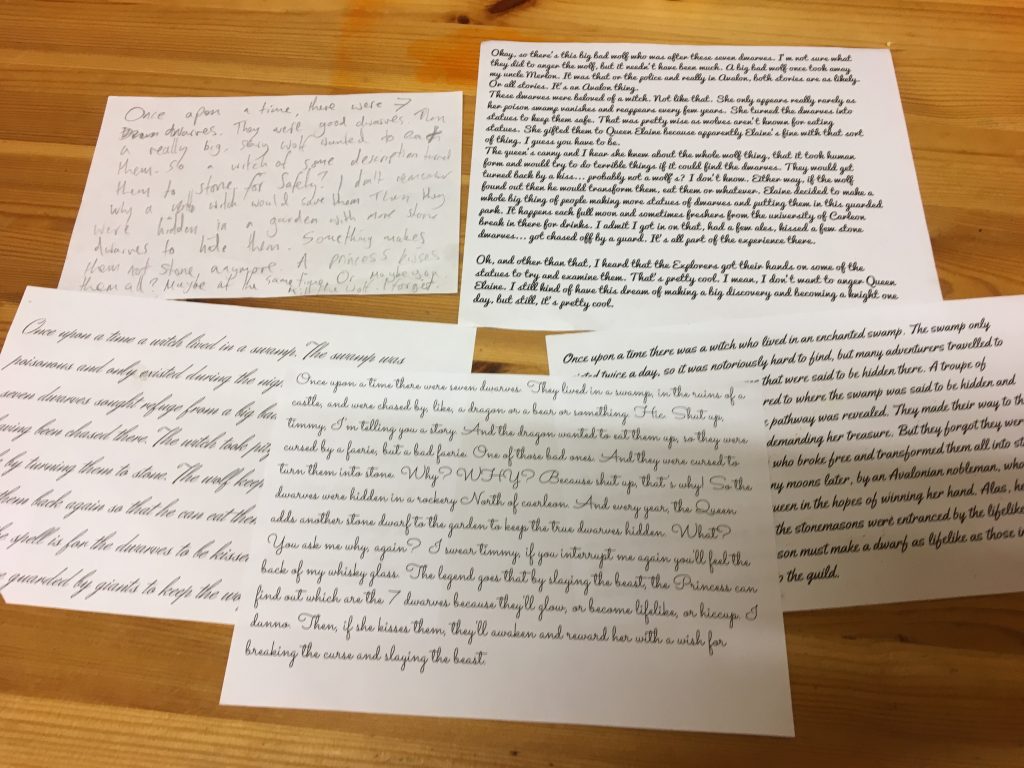 Which ones of these were true? Any and all of them, of course! We then needed to roll to look into the stories and how to find the mystery swamp. The discoveries included: animals were preternaturally attracted to it, the swamp glowed eerily, the witch sees all inside the swamp, she has a Baba Yaga style hut on chicken legs and was Ussuran in origin.

The group thought the best way forward was to gather up a bunch of cats and point them in different directions, looking for the swamp. This was Avalon, so it was as valid tactic as anything else. Galina spoke to the cats, explaining that if any were Fair Folk, they were free to go if they didn’t want in on the plan. One of the cats wandered off, proving it was either smart or a Fair Folk in disguise. Vanya played with one of the cats while the group wandered around the countryside. Eventually they saw odd lights and Galina recognised the grass as that from her homeland. We had a dramatic scene as we wandered into the swamp:

Effy – Jumped up into the trees to scout from there

Galina – Attempted to use her stones to purify the swamp

Nina – Started loudly telling the story of our journey

Remy – Scouted away from the swamp’s water

Vanya – Was on cat duty

And Finn was left to find us the path forward

Galina wasn’t able to purify enough of the swamp. Finn found a ridge just above the waterline and followed it. None of us found any human threats and Remy saw a deer up ahead. We followed it and saw a circle of large stones, with paths branching out. The stones felt like they were watching us intently. The deer tentatively drank from the water and a massive three-taloned leg burst out, flinging it away. A house burst up from under the water and chased it down.

Effy closed the distance and a large, leathery carpet ‘tongue’ rolled out. A witch sniffed the air and cursed at us for letting the deer drink. There were a pair of gargoyles flanking her, scowling.

Galina asked about the dwarves and said that she had purified some of the area. The Crone spat out, “You killed us all!” The animals all around started to freak out as a large human-shaped wolf started walking through the purified swamp. Behind him were several shadows, becoming wolves as they closed in on the group. There must have been forty or so.

“Look, enough fur to make coats for everyone!” Remy shouted and prepared to fight.

I activated an ability of Effy’s to be seen as nonthreatening by any enemy who hasn’t met her yet. She walked up to the lead wolf to ask him some questions. The massive pack of wolves had the ‘assassin’ ability allowing them to cause damage first, mainly hitting Remy and Galina. Vanya flung the remaining cat away and stabbed the big, bad wolf with his harpoon, then flung him into the poison lake. Remy and Finn both annihilated thirty-eight wolves between them and Galina used her still poisonous hands to down the remaining two.

The big, bad wolf picked himself up out of the lake and Effy watched as he did so. She asked, “What are you doing?”

“The witch needs to die!”

“To turn the dwarves back!”

“They took my family.”

“Couldn’t you work it out in a nonlethal way?”

The rest of the group caught up with Effy as she was talking to the big, bad wolf. Vanya asked whether the wolf knew that the dwarves might be in a big park. He didn’t know that…

Josh started laughing about a spell, but didn’t mention what it was at this time. This was normally a worrying sign.

Looking at the stone circle and specifically the seven giant stones it was comprised of, it became clear that the statues were a ruse to mislead people. Effy started to examine the statues and saw that one had a raised section. She took out her special etching tools and acquired a new section of map:

It pointed to Aldana in the nation of Castille. While Effy was doing this, Galina was being cajoled into kissing one of the stones, given her noble status. Apparently she was a princess enough in the witch’s eyes as the statue turned back into a dwarf. She started going round to the rest of the statues, kissing them. The wolf and the witch were both uneasy about all of this.

The witch had turned the dwarves into stone at their own behest in order to keep them safe from the wolves. They had hunted down the remaining wolves like the big, bad one.

I suggested a sanctuary for the wolves and to get the dwarves to help find a home where they would be safe and people would be safe from them. Nina tried to use magic to push the wolf into acting out his base desires, but he had an indomitable will. Jacob mentioned that the wolf felt love as his main emotion, as recompense for giving Josh’s character a big ‘no’.

Nina then reiterated basically what Effy had suggested, but mentioned that maybe the wolf sanctuary could be away from Avalon. The witch was from Ussura, so a pact was made to send the wolves there. A doorway opened and the remaining cat Vanya had thrown aside transformed into a little old lady who Galina recognised as Matushka. This was the spirit of her homeland. Matushka took the wolves to Ussura, where they would be safe to hunt in peace.

Things had ended amicably between the wolves, the witch, the cat and the group. What could go wrong? Oh yes, Jacob set us homework to create the dysfunctional members of Finn’s crew. 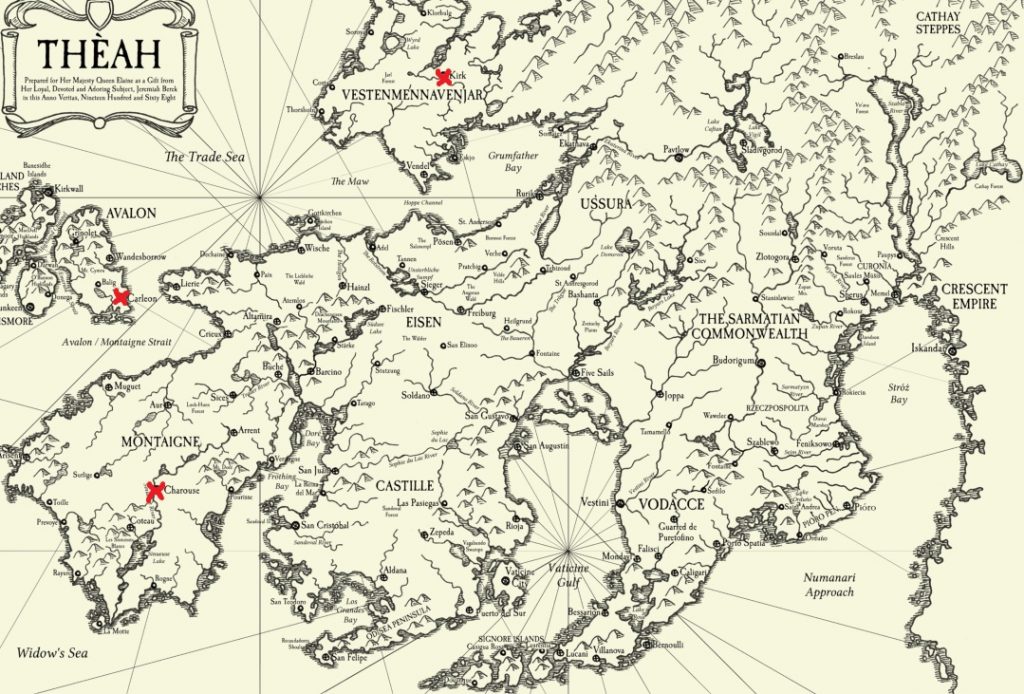 Next session we would set sail for Aldana! A land of religious zealots and daring freedom fighters!