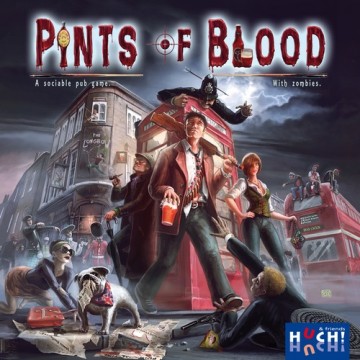 Solid and really rather great board design and very thematic art.
There is a couple of great mechanics at work here, fighting against the rest of the game.

Its all just sooo random.
Those end game surprises should be taken outside and shot.
The game play quickly becomes monotonous.

This could have been a contender. It had the amusing Shaun of the Dead vibe, some great art and design and then pisses them up against the side of the pub. The core game isn't terrible it just outstays its welcome about 30mins into playing and then just to really wind you up it lets somebody else win.
Look there are just much better Zombie themed games out there and I'd recommend them over this.

Can you see any Zombies out there? Nah. Oh, wait there’s one. Pints of Blood shuffles to join the hoards of zombie board games by attempting something fresh. But is it the recently deceased still pink from the morgue or a fetid walker with an air freshener around its neck?

What we have here is a co-op tower defense game, taking its cue from Shaun of the Dead you and your motley crew of compatriots must defend a beleaguered London pub from the undead. Using whatever improvised weaponry, you can assemble you’ll have to hold out for rescue. It’s alright, they even have a Breville out back to do you a toastie. 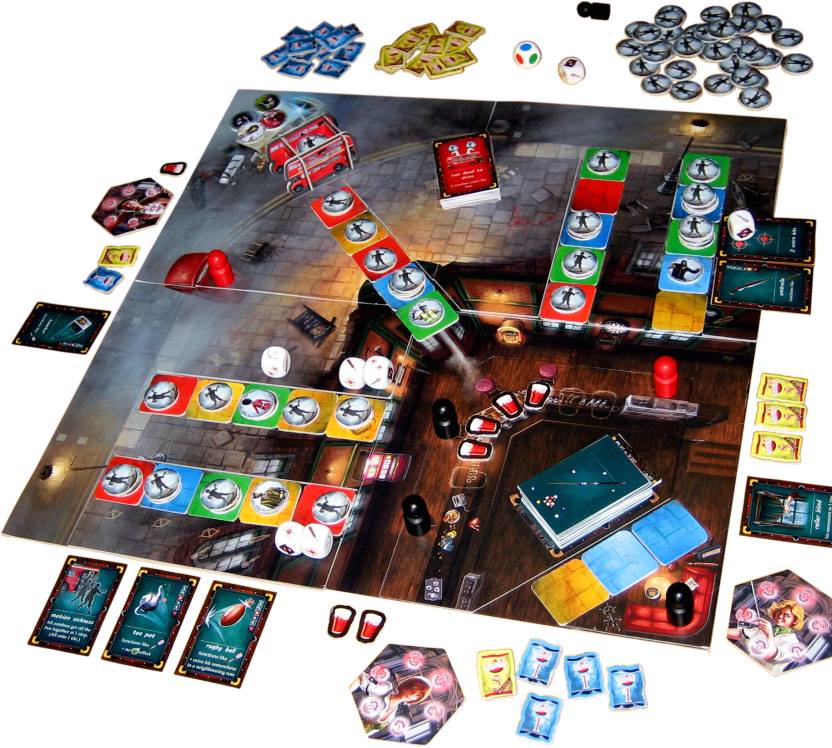 The board design is handsome enough with the bar surrounded by the mist-shrouded zombie teaming streets. Five indented channels border the pub where you can neatly slot different colored tiles that represent the very British zombies as they politely queue to gain entry. It’s a nice touch to stop any would be bumbling players from scattering them across the table.

These randomised tiles are populated at the start of the game by rolling a colour die spawning that colour in each row from face down zombie tokens and then it’s off to the pub. 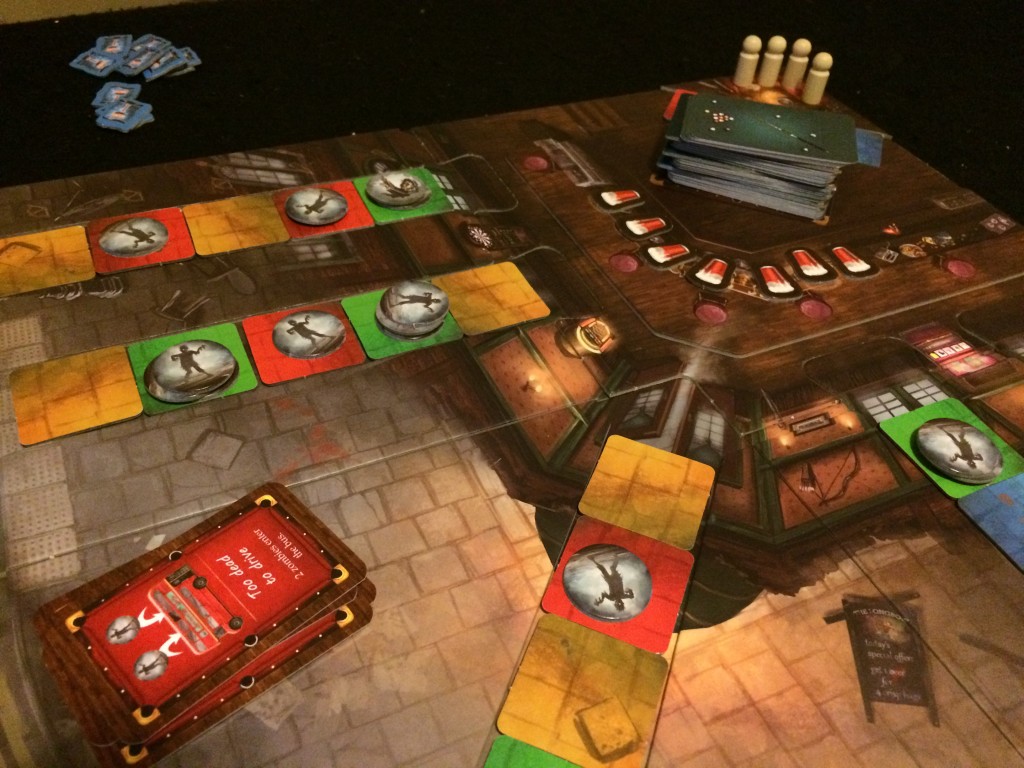 On a players turn, they have at their disposal four revellers they can position to defend one of the rows, whenever they do this they draw a card from an event deck. The deck is split into four quarters that when exhausted gives bonuses of either cards or potentially more pub goers. The cards contain everything from buffs to weapons or helpful perks to fend off the undead, unfortunately, buried within, are also hazards that accelerate the zombies advance or spill more onto the board.
The deck also functions as a game timer as buried in the final quarter is a random rescue card that specifies the escape requirements for that game (which I’ll most definitely come onto in a bit).

It’s entirely up to the active player how many of the heroes they place as these dictate the rows activated that round. It adds a push your luck element to proceedings because to get more cards you’ll need to place more defenders but then you’re also offering more rows to attack.

Once all your chaps are in place, then the player rolls all eight custom dice, one being the colour dice adding surprise! More zombies. The others feature either weapons or additional hits. There’s also a chance of rolling a zombie when this occurs then a undead is added to a Bus idling out in the street, we’ll come to that also in a minute. 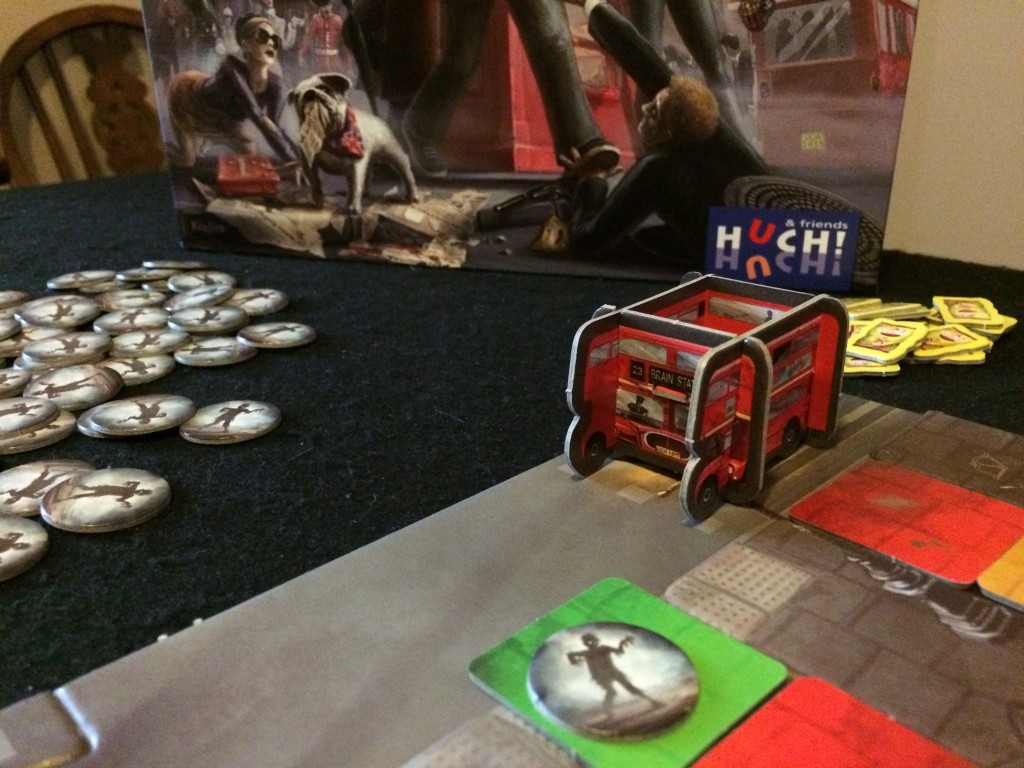 Then its a case of deciding what you do with your remaining dice if it’s a weapon then you can use it in any of the rows you’re defending, these have different ranges as to what tiles in the rows you can hit. So a cricket bat will allow you to brain the first couple of rows while a bow and arrow? Can reach to the rear of the run. Following that, you can use the additional hits boosting the damage you do. Each row is then resolved hits cause the token to be turned over and you see what you did. There is an assortment of zombies some just taking one hit, others two and some with a gaudy green tinge around them that attract a further zombie to their spot. And finally biters that you don’t want getting in as they cause additional wounds.
Once a row has been resolved it shuffles forward, and any zombies that end up in the pub are placed on your player board.

Now that bus I mentioned. The final phase of the turn if the bus has any undead on it in then it moves row by row dropping off a deadhead that can shove more undead into the saloon, this includes rows you may not have activated that turn. Finally, scores are totalled you get a bag of crisps for each zombie you took out and then have to discard a card from the deck for every three you killed. And you then check how many zombies are on your player board, each causes you a bite. You can withstand a maximum of five bites anymore and you lose a pub goer, there’s no player elimination but what it does mean is your options on the following rounds will reduce as your inebriated crew are nibbled on.
Once they’ve all gone then its game over. 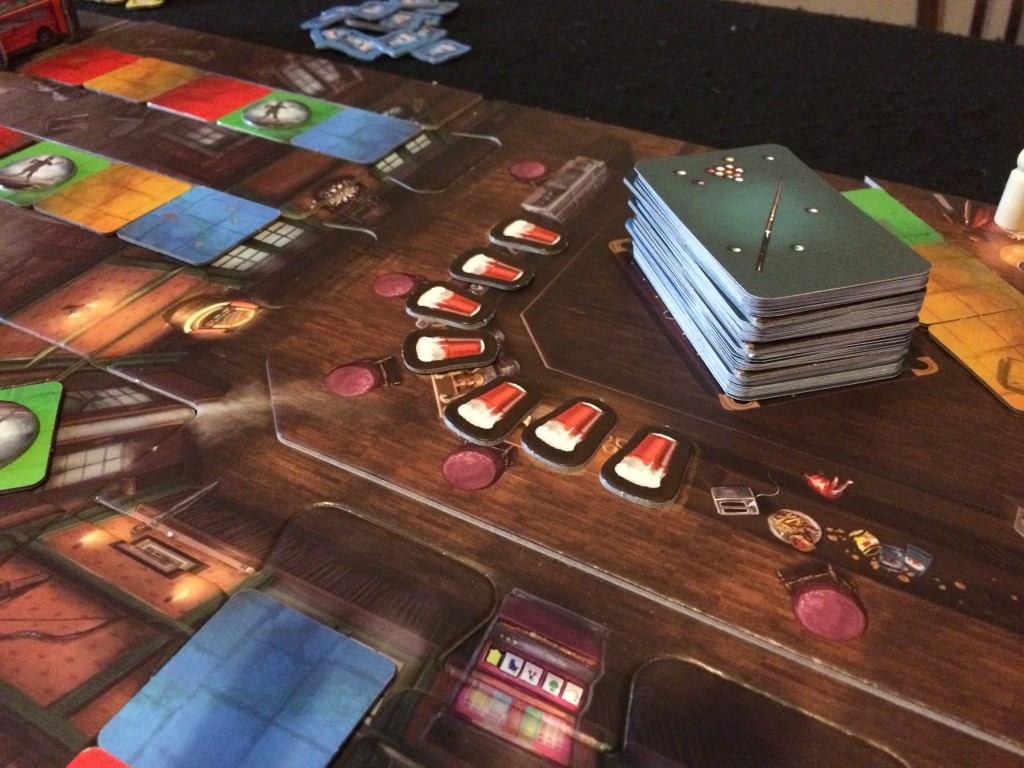 The other thing I didn’t mention is what to do with all your crisps. You can spend five to buy a pint from the bar that will heal a bite, or even buy one for a friend, these are limited to seven so you want to use them sparingly, or you can buy cards from fellow players if they ever have any.

So the components are pretty neat, the art captures the ropey old pub feel and we get a little red double decker bus that putters about that you can fill with zombies. There are no mini’s and the player pawns are basic, everything looks and feels well produced and designed.

The gameplay itself, however, is a real mixed bag of pork snacks there’s a huge amount of random going on. The dice rolling and assigning of the attacks can mean that if you roll incredibly poorly then you’re going to get hosed. And frustratingly there hardly any ways to mitigate this, its a bit of a design fail. The actual mechanism controlling the zombies and the choices as a player are satisfying to begin with and then after 30mins you’re wondering where all the fun went.

The victory conditions well they are completely half-arsed. They feel shoehorned in as an afterthought, it wants a betrayer reveal but as no-one is able to plan short of hoarding everything in the hope it pays off, and the fact that you’re using everything just to survive anyway makes it all just… Well its fucking retarded.

This is rather like one of those straight to video zombie movies that you see filling the big supermarkets shelves, it has a kickass cover and the back blurb makes it sound like Lawrence of Arabia with Zombies (hmm?). You sit down to watch it and then its an hour and a half of tedium which if you’re really lucky is interspaced with occasional gory violence or nudity, and you’re left when it’s finished having to apologise to everyone else who’s just endured it with you. Well, this is that, but there’s no tits, and the only violence will be from the other poor mugs you’ve just made play it with you.

Bottom line this feels like a half designed game that needed another round of play-testing to tighten it up. Perhaps if you equipped some beer goggles, then it could be mildly attractive and something to get your zombie rocks off with. But at some point you’re going to sober up and when you roll over and find this with its hand down your boxers your probably going to get a bit of a shock.