The City of Kings 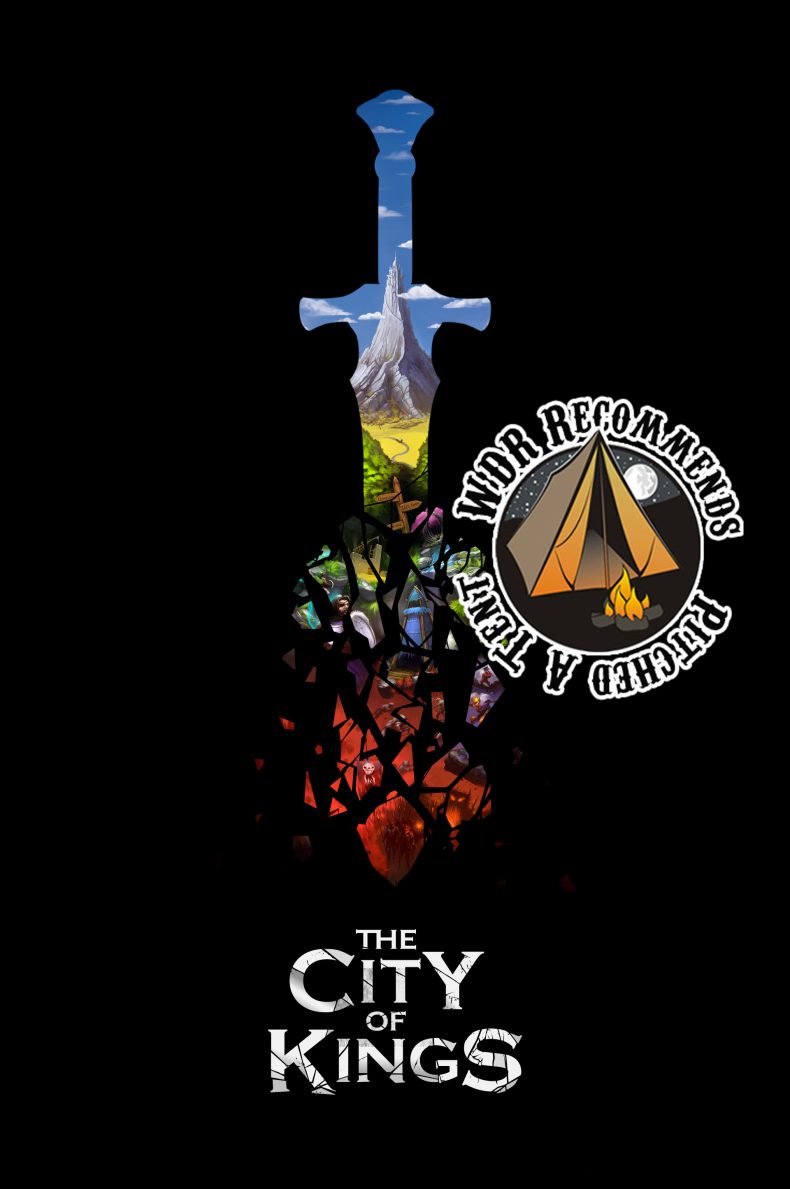 Around a year ago I published this very review that you will find below for The City of Kings, it blew me away on my first encounter and went on to do rather well for itself.

Well I’m resurrecting my initial thoughts as the reprint for the game plus some new content including more quests, characters and even miniatures has just hit Kickstarter.

The delivered game was a thing of beauty and absolutely jammed to the rafters with content and I cannot recommend it enough which is why once again I’m going to say to you, that if youre a fan of beautifully realized fantasy worlds looking for a game that immerses you within one and have even a passing relationship with World of Warcraft then I urge you go and take a look. 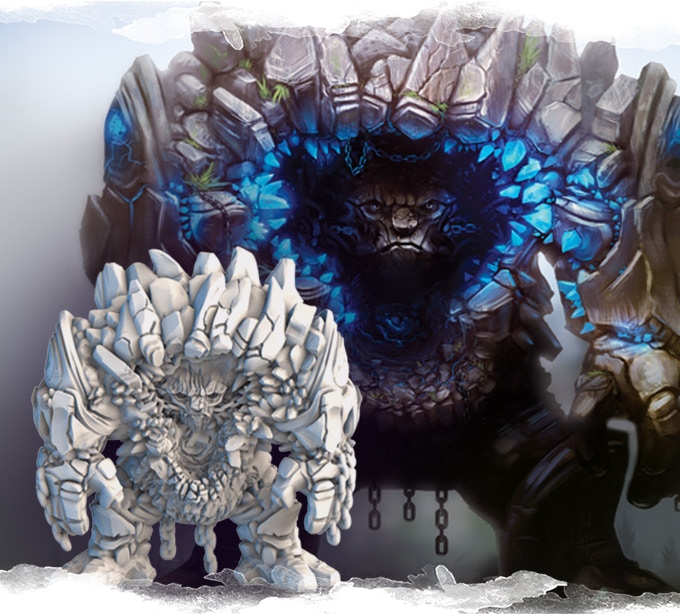 I had an addiction. I’m Mike and I used to have a level 90 Gnome Warlock in “World of Warcraft” and for three years it infested my every waking hour. And then one sunny afternoon having spent most of a week leveling my fishing skill I had a moment of clarity. What the hell was I doing?

I quit Warcraft and have never played it again.

Which makes my recent encounter with City of Kings problematic because for a brief moment I was back in that warm MMO embrace. And I’m not proud to say I loved it. 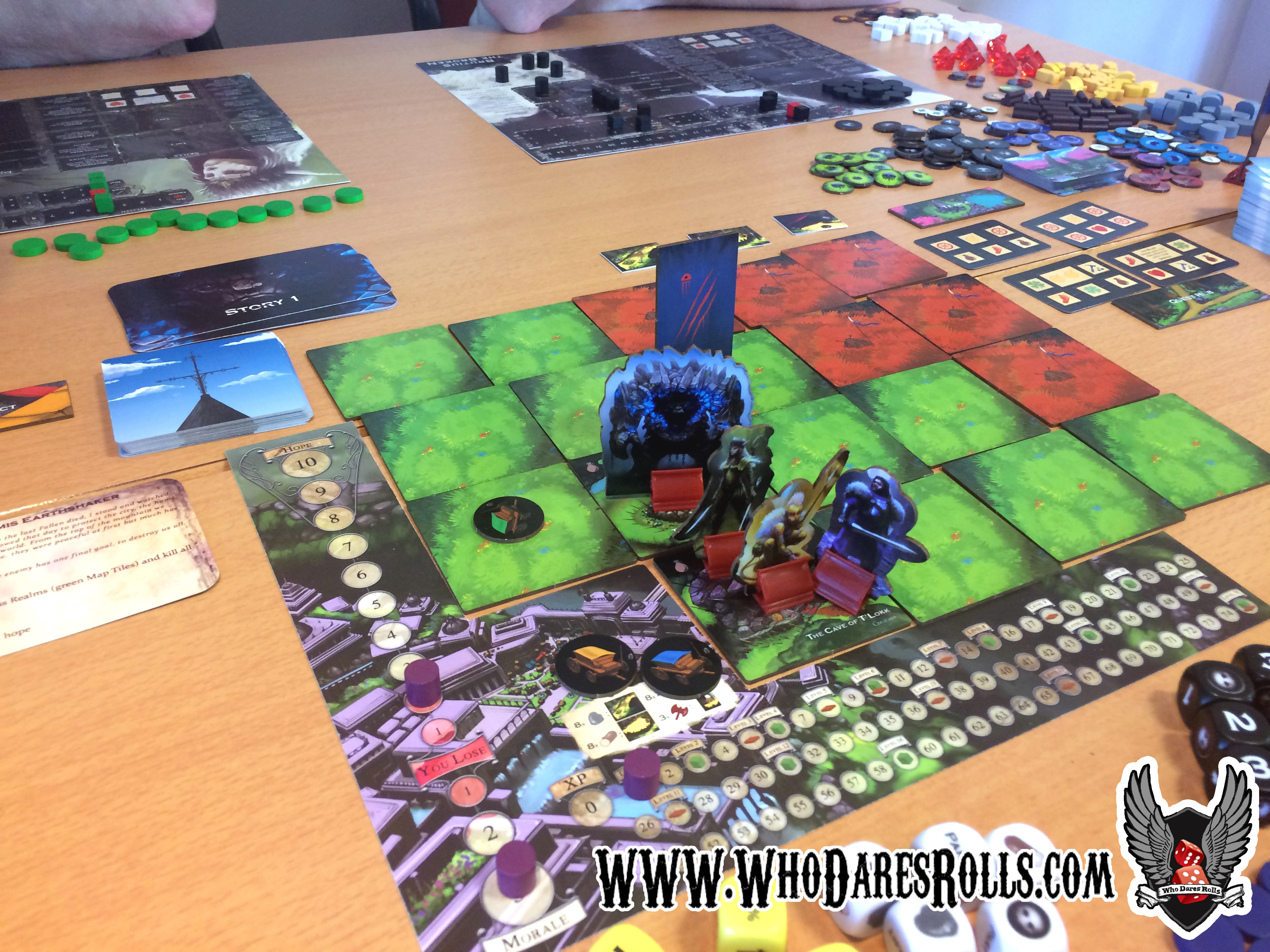 City of Kings for those of you not in the know is the best-kept secret on Kickstarter at the moment. It’s a sprawling cooperative fantasy adventure game where you and three friends get your Tolkien on and get down and dirty with some character levelling, questing, fishing and battling some heinous foes.

I love fantasy adventure and roleplaying games I’ve grown up on them from D&D through to Heroquest and on to Descent and Runebound and all manner of stuff in between. I guess it was inevitable that I’d eventually find myself at WOW’s doorstep before tumbling headfirst down the MMO rabbit hole. 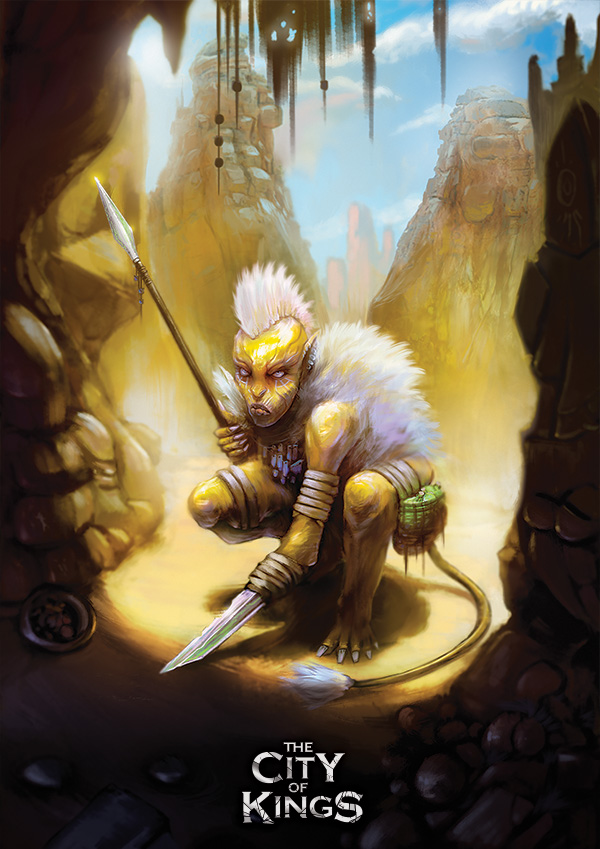 Like any reformed addict, I’ve been seeking a safe experience to capture that same buzz from those heady days spent in Azeroth sadly few tabletop experiences have come close. The WOW board game is a gruelling stodgy mess from early FFG, I did briefly flirt with Runebound 3rd edition that teased that experience but alas fell short with its laborious game play and death by Pog combat.

The closest I’ve come to experience anything close to those old Glory Days was with “Sentinels of the Multiverse” which aside from the superhero theme is essentially a Raid Boss encounter complete with the Tank, Healer and DPS classes thinly veiled beneath capes and spandex.

Well, people, that’s all changed because Frank West has captured the WOW experience in cardboard. 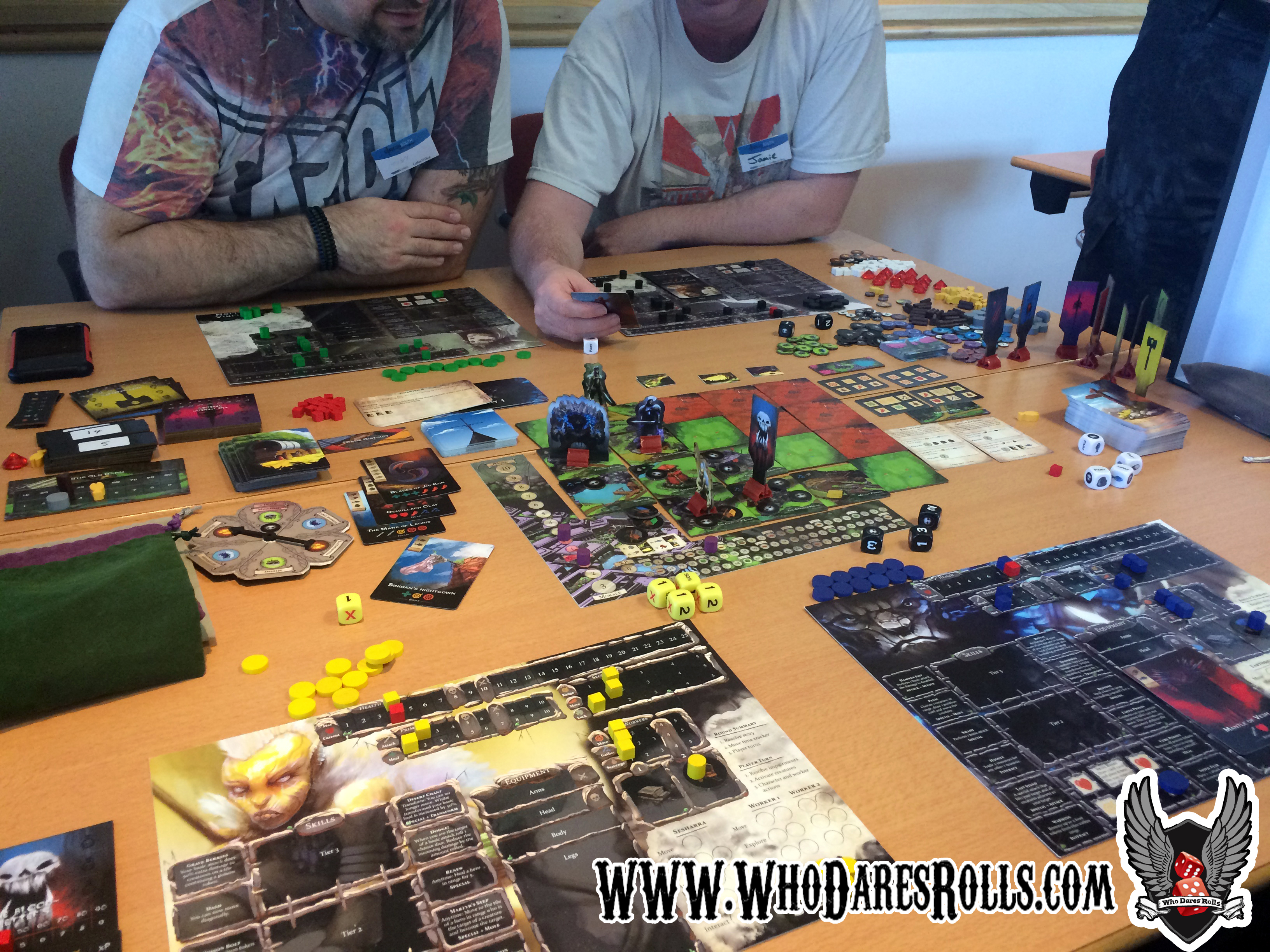 At first glance, you might mistake City of Kings as an imposing convoluted some may say fiddly behemoth. With its expansive character sheets filled with cubes and tokens and its stacks of cards, tokens and assorted paraphernalia at a glance it really doesn’t look like an invitation for an evening’s jolly gallivanting. Having glimpsed it being played at Airecon my interest was piqued but I approached with caution as it looked a bit dry and deadly serious.

These misconceptions are about as far from the truth as you can get. This past weekend I finally had the chance to catch up with Frank on his City of King’s road tour and at last get to savour its multitude delights.

It’s clear from our conversations that this game is a passion project over the past two years Frank has created the world and its history and while we might only be getting to peek over the battlements in Kings there’s a whole lot else going on in the universe that he’s gagging to share with us. Just take a look at the Kickstarter page or on the official game page to get a taste of this expansive world.

So to the game. We played through the intro story that has clearly been designed with the intent of walking you through the game’s mechanisms and it’s the first sign that the design team have been inspired by modern video game design. With each proceeding challenge slowly dropping new rules or mechanisms in front of you like a trail of cookies to follow. 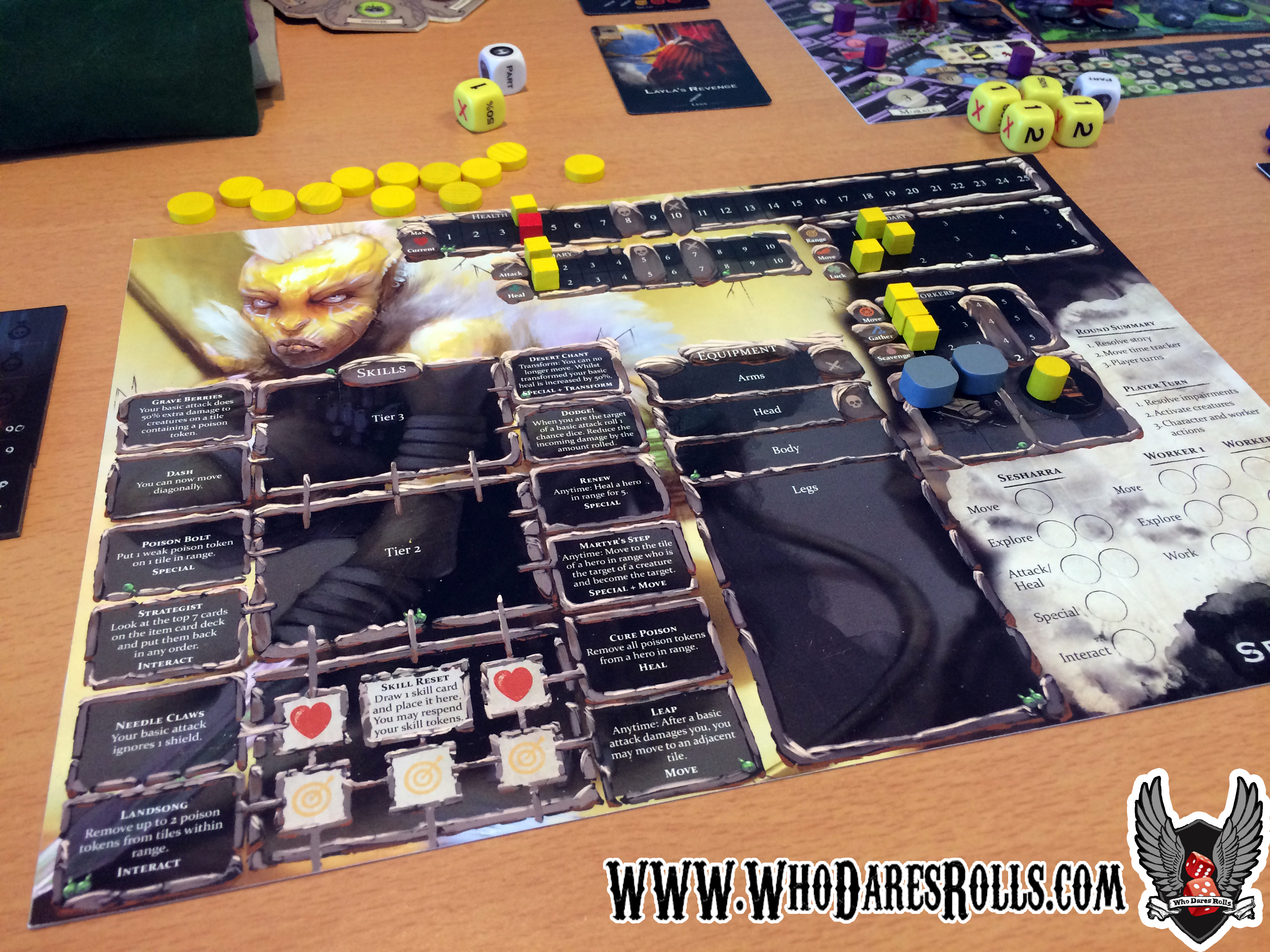 And those mechanisms are refreshingly easy to grasp. Essentially you only have 5 actions to take a turn, you can move, explore, fight, heal or interact with quests and areas on the map. That’s it, aside from a worker that you bully into gathering supplies (he can even fish yay) or doing a spot of exploration that’s everything you’ll be doing a turn.

And unlike some of those aforementioned games that have more downtime than SouthWest Rail even in the late stages of the game when we were discovering quests, crafting mystical equipment or battling bosses turns were done in minutes. I kept waiting for the catch. 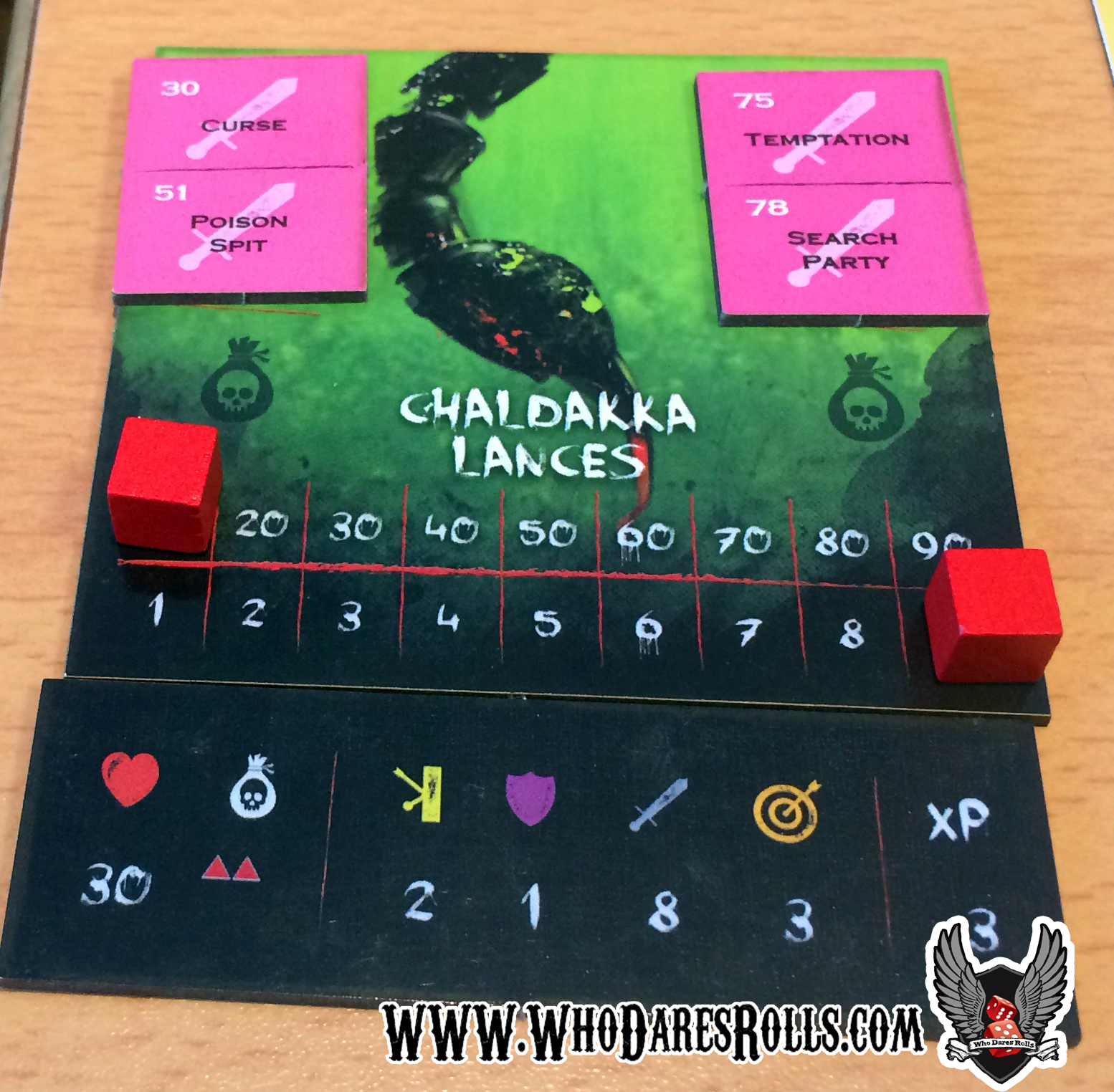 As we opened up the world and discovered more to do and bad guys to whup! which in a whip-smart bit of design are procedurally generated slowly growing in menace as you progress through the adventure. I suddenly stopped and smiling looked over at Frank and said, “this is Warcraft, this is really like WOW!”. And Frank grinned and shrugged in that way that bloody designers do to say yep! (we fucking nailed it), and it’s true. All of us Tony, Jaime and Ollie (Son No.1) all WOW veterans had slipped unconsciously into our roles of Tank (Ollie) DPS (Jaime) Loot Whore (Me) and Tony well Tony was doing his best Leeroy Jenkins impersonation running around starting fires and generally not actually helping Just like a typical raid group.
Frank did confirm that it had been his design plan that players should settle into these tropes of the holy trinity. 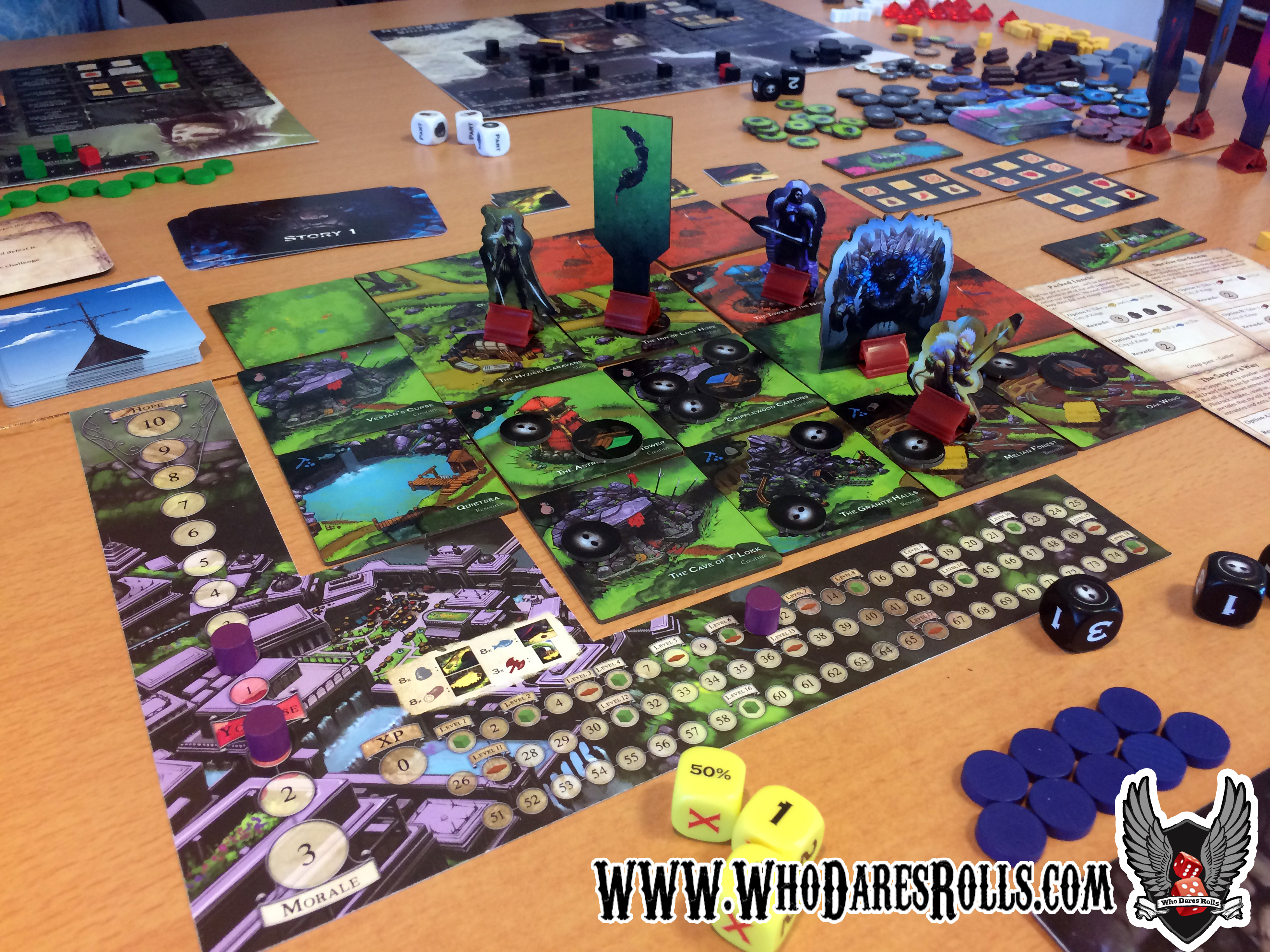 I really fucking dig this game, I love that it’s so not the convoluted heavy stodge that I was dreading but a fast and fun rollicking adventure yarn. I adored that each of us was free to do exactly what we wanted and I bloody love that it has dice that you can choose to go down that path or not. If you want that random chance of a dice roll then invest in your luck stat, want to stay with hard numbers and deterministic combat then don’t. The quests love them, just like those addictive little bastards from Blizzard’s baby, getting engrossed looking for stuff chasing that next level ding. And that’s another thing this never felt like a grind.

For those concerned of too much random, then well every world thrives on a bit of chaos but really the only real random in the game is what you bring to it and the tile layout of the world each time you visit it. But then in my book that’s not random but endless replayability. 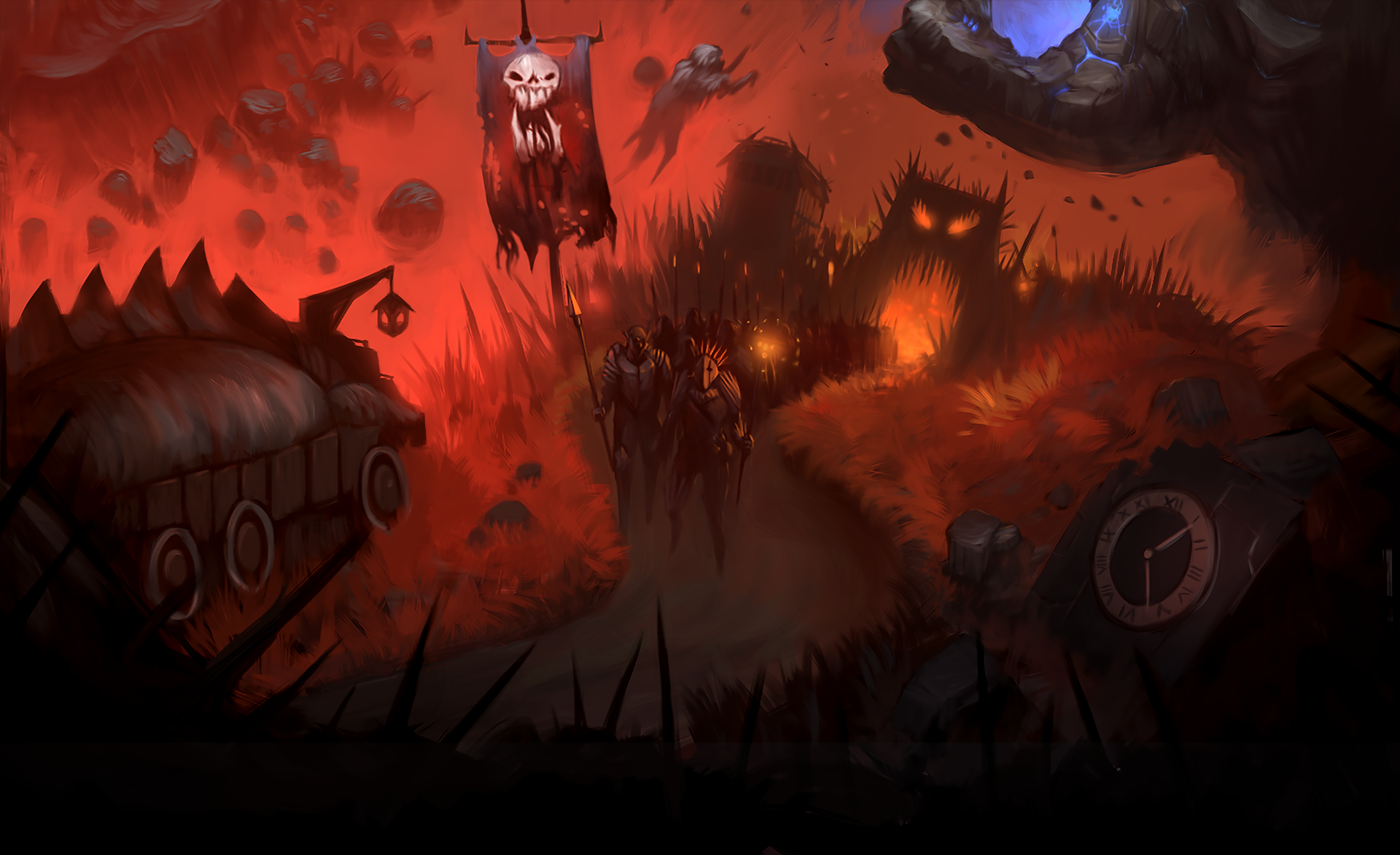 And the art, let’s not forget that. It’s a really beautiful thing and whether by choice or chance it has the Warcraft vibe down to the tile illustrations and the choice of colour palette, it’s an effortless bit of art direction that nails everything it needs to, feeling familiar yet its own type of cool all at the same time. 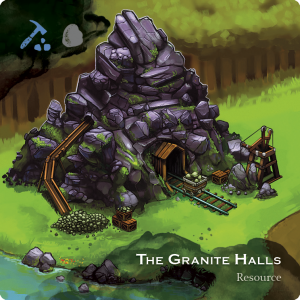 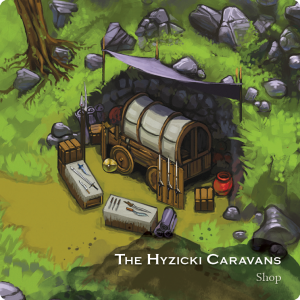 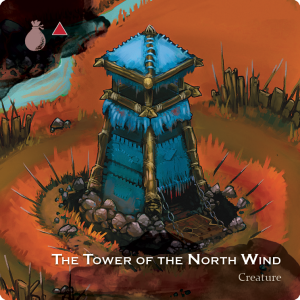 And you know what I did last night, I went to sleep thinking about the bloody game, it’s like that crack-fueled WOW addiction all over again!

Here’s the thing, in this glorious age of Board Gaming we have hype thrown at us on a regular basis, everything is the next big thing. City of Kings deserves all the hype, it’s the real deal, It’s my misspent WOW years in a box. My only worry is that by the time everyone works out just how goddam good this game is you won’t be able to play it aside from with smug bastards like me coveting our prized Kickstarter copies.

So if you’re on the fence and anything that I’ve said got the short hairs a quivering then you should probably hit that pledge button, come be a smug bastard with me.

0 likes
Board Game, Reviews
D&DheroquestRuneboundThe City of Kingsworld of warcraft