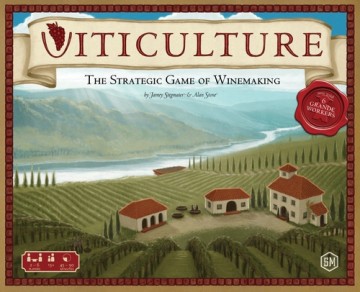 Have you ever dreamt of giving it all up, jacking it all in, saying goodbye to the sweat and the grind and staring a new life? Perhaps you want to open a B&B on the French Riviera? Or maybe, given the recent changes to the law in several US states, you fancy growing your own premium, high grade cash crop, the blunt, the chronic, the sweet Mary-Jane, in rural Washington State? Or how about a vineyard in northern Italy. Relaxing with your feet up and a bottle or two on the table as you send your workers out to the fields to plant, to harvest, the crush, ferment and bottle your latest vintage. How does that sound?

If that’s the life you’re after, then face it, it’s never going to happen. You’re too lazy, you’re too settled. How will you watch Eastenders from the hillsides of Italy? And it just won’t be the same if you can’t pop out for a pint or two with Brian and Colin whenever the urge takes you. And besides, you’re not going to learn Italian, not at your age. So instead, you should grab yourself a case of this beautiful, fruity, mellow vintage – Viticulture – along with the expansion set, Tuscany, and kick back with that glass of wine.

Actually, maybe don’t kick back. Viticulture isn’t a breeze. It’s not simple and relaxing, it’s nothing like a day’s fishing. Keep that wine on standby though because after a thorough play through you’ll probably appreciate a glass…

So all of that is a long-winded way of saying that Viticulture is a Euro-style worker-placement game themed around making wine, and a bloody good one at that. Before we deal with the expansions on offer, let’s run through the basic game on offer. 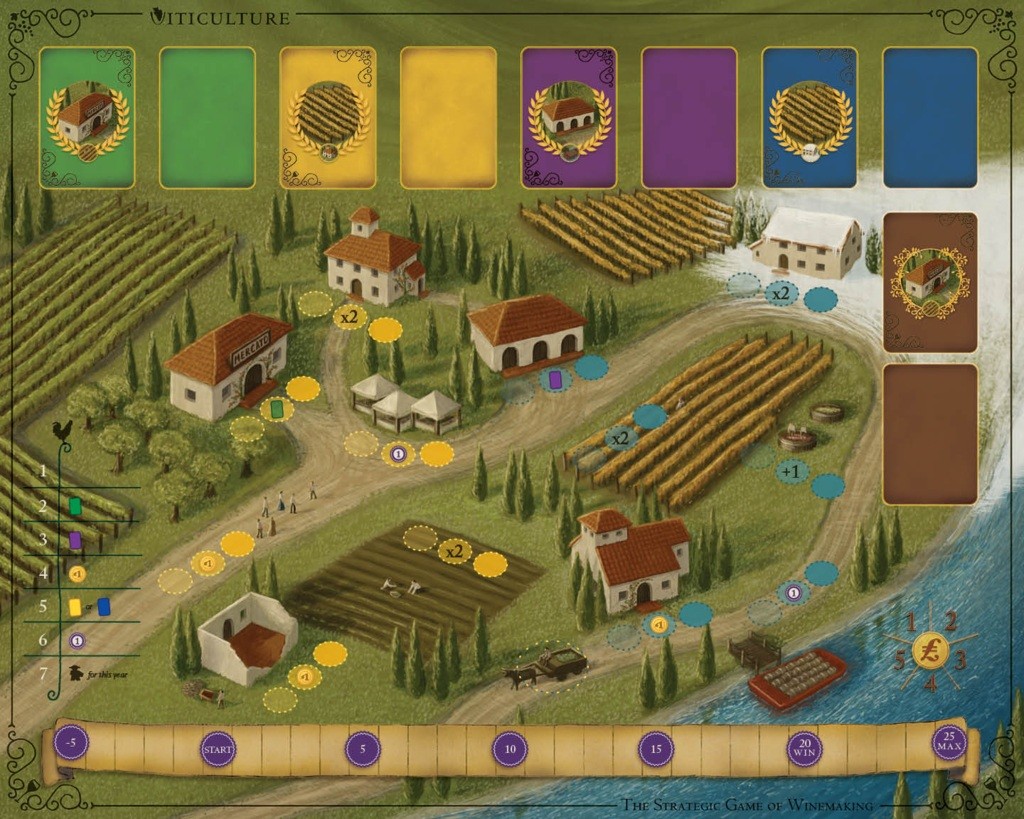 The idea is that you and your opponents (the game plays 2-6 players) have all set up rival vineyards in the hills of Italy and must now compete to plant your vines, harvest your fields, crush your grapes and sell your wine. To do this you have a number of workers (starting with three and potentially growing your workforce to six) to use and a number of actions to compete for, which vary from giving tours of your vineyard, accepting help from various visitors (in the form of playing visitor cards collected through the game), building new elements of your vineyard and training new workers.

Each action can only be activated a certain number of times each turn, depending on the number of players, meaning you have to strategise when you make your moves. The game is also divided into seasons but your workers must last the whole year round, meaning going heavy on actions in the spring limits the number of things you can do in the autumn. 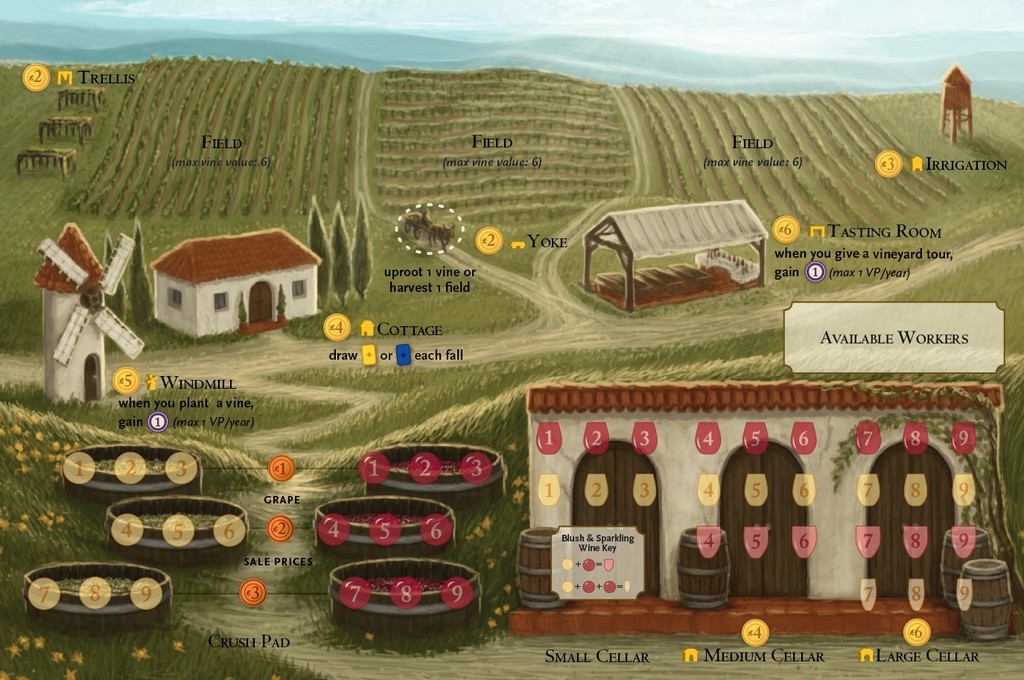 The wine-making mechanism is beautiful in its simplicity. Once you harvest your fields, glass markers are placed on the crush-pads to indicate the vintage of the wine (the higher the number the better the quality, the more valuable the wine that will be produced). When you make wine from your grapes, the markers move over to your cellars – a white 3 grape becomes a white 3 wine, but combine a white 3 and a red 2 and you have a rosé 5 (or blush wine in the terms of the game) – and at the end of each round (year) the grapes and wine age and move up a number. You earn your victory points by selling wines of the appropriate vintage (or better) to fill the orders you collect.

All of this provides a variety of ways to play the game, with a number of strategies offering the potential for victory. However, after a few play-throughs the game starts to become a little lop-sided. When the game starts there’s a need to go heavy on the spring actions – getting vine cards and planting them in your fields, building the various buildings available for your vineyard (which include increased cellar sizes, a trellis and irrigation) are all things you need to do to get yourself up and running. The second half of the game is about exploiting that engine with a preponderance for autumn actions – harvesting the field, making up wine and selling it on. This can lead to a log-jam with the player going first gaining the advantage (though turn order is determined every round so you’ll never be stuck going last). 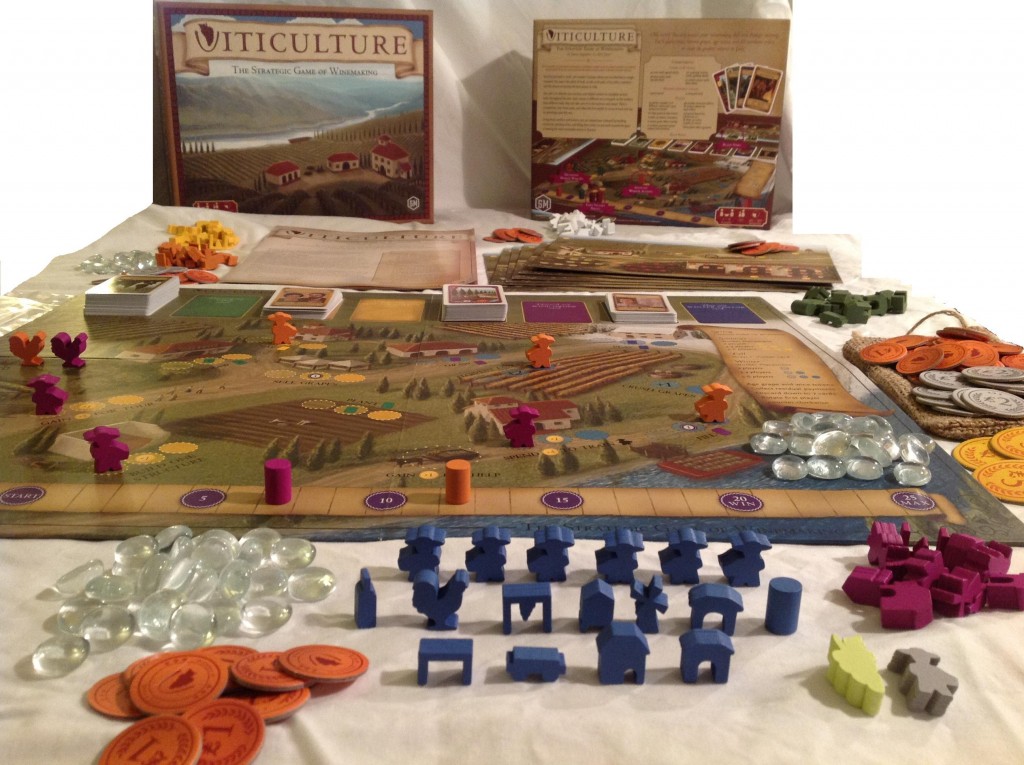 The game does look beautiful. The components are some of the highest quality I have seen and the care and attention to detail in the artwork and packaging are excellent. It makes the game a joy to setup, let alone play, and the reservations about the balance of the game are minor quibbles. Regardless of them, it’s still an excellent game, if not quite as beautifully balanced as Fresco. 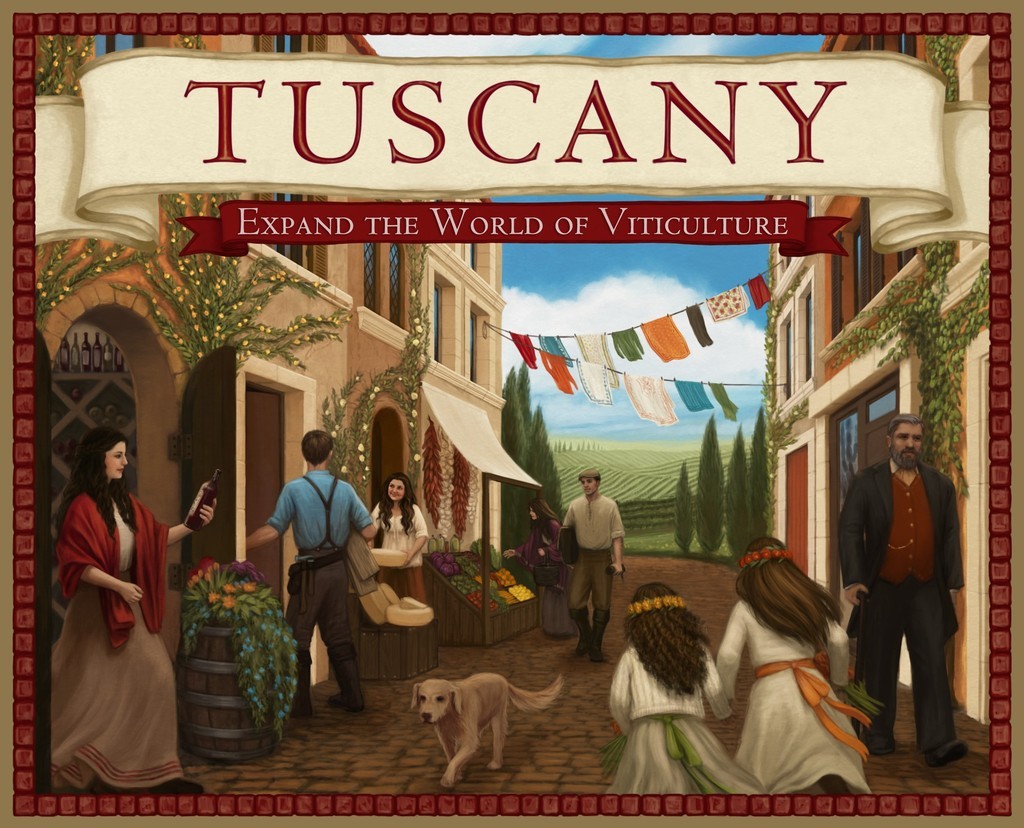 However, where Fresco becomes overly complicated the more expansions you add into the game, the Tuscany expansion is what really elevates Viticulture into a league of its own. Every issue you might have with the base game is addressed with one or more of the different modules you can add on.

The expansions are graded into 3 levels and Stonemaier Games suggest you add each one in one at a time and play a couple of games with each before moving on. They also suggest that you don’t read up on the modules before you play them so each comes as a nice surprise, which makes this review a little awkward. What I will say is look for the big ‘End Spoilers’ line further down and rejoin the review there if you want to be kept completely in the dark about the content of these expansions; the spoilers will start in the next paragraph. You have been warned. 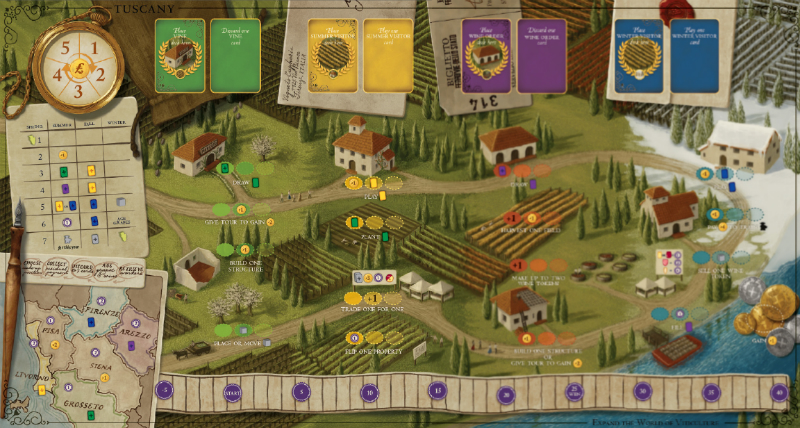 Personally, I’d throw all of the level one modules in at once and get on with it. These introduce things like some advanced visitors, giving additional or different bonuses, and the ability to sell one or more of your fields to give you a cash boost early in the game (you can buy them back). The best change, though, is the addition of an asymmetric start-up system, giving each player a different selection of resources to start with, some of which you can choose, prodding you into a different strategy than you might normally go for. Perhaps you get an extra worker or start with a larger cellar? More money or a yoke? This is a simple and excellent addition.

It’s probably worth going slower with the level two and three modules. These start to reshape the game and represent the point at which Viticulture starts to accelerate away from the pack. The extended board divides the game properly into four season, each with their own sets of actions, meaning that the previous lop-sided nature of the early/late game is no more. There are actions to take at every stage of the year and properly selecting which to go for when becomes the key to victory.

This also introduces a new set of bonuses for the turn order. As with Fresco and the base game, you’re opting for a ‘wake-up time’ in the turn order, with the earliest person getting fewer bonuses but the chance to go first at every turn. The new board adds increased depth to the bonuses, and also incorporating the twist that, in order to get the very first possible turn you have to have taken the last space on the previous turn. It’s a very neat concept expertly implemented.

From there the game moves on to introduce further elements such as cheesemaking and The Mafia, both of which are highly imaginative but also only really for the hardcore fan, pushing things into the Fresco end of expansions. That’s not a criticism, it’s just to say that they may be a little much for some players (while essential for others).

On a recent episode of the Who Dares Podcast I nominated Viticulture (& Tuscany) as my number 1 game, and while I don’t especially agree with ranking games (or anything) in this way, I stand by that. When the expansion set is included, it offers an unrivalled level of fun, strategy and complexity. It’s a game that should be simple enough for novice players to get their heads around, but offers the depth that a hardcore player would be looking for, and has the versatility to flex between the two extremes.

The set itself is a work of art. You’re unlikely to see a game which looks as good as this elsewhere (unless it’s another Stonemaier property, of course – this really their specialty), and it will always be something you’ll want to tear off the shelf and show off to the uninitiated.

The theme is well implemented, with vines and the aging process well represented. You could make a minor issue over the limit number of actions available (why can’t I plant a vine just because 3 other people have already? – because it’s a game and these things have a competitive element) but frankly that’s stepping over the mark really.

At the end of the day, this is the worker-placement game to beat. The best bar none. Leader of the pack. On its own, number 1

Right, after all of that, I think I need a glass of wine. Where’s the bottle opener?. 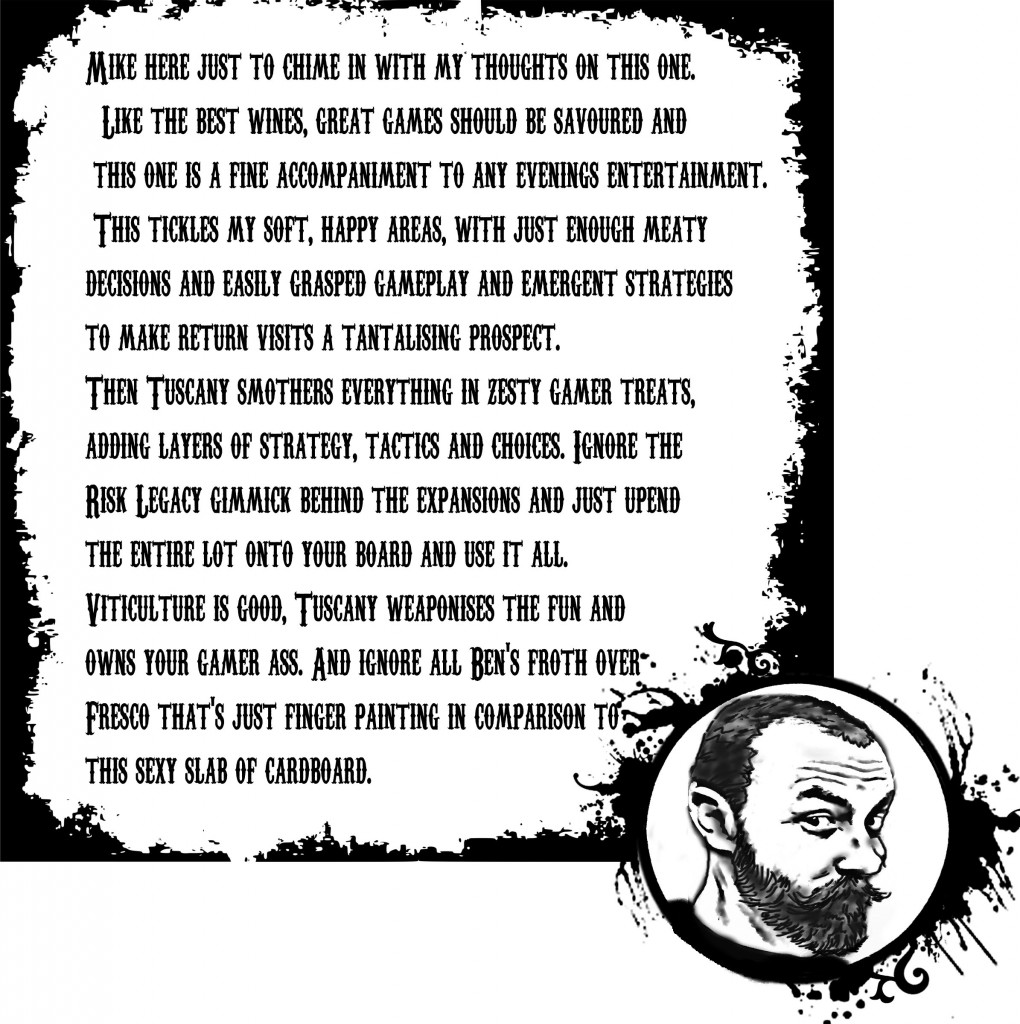