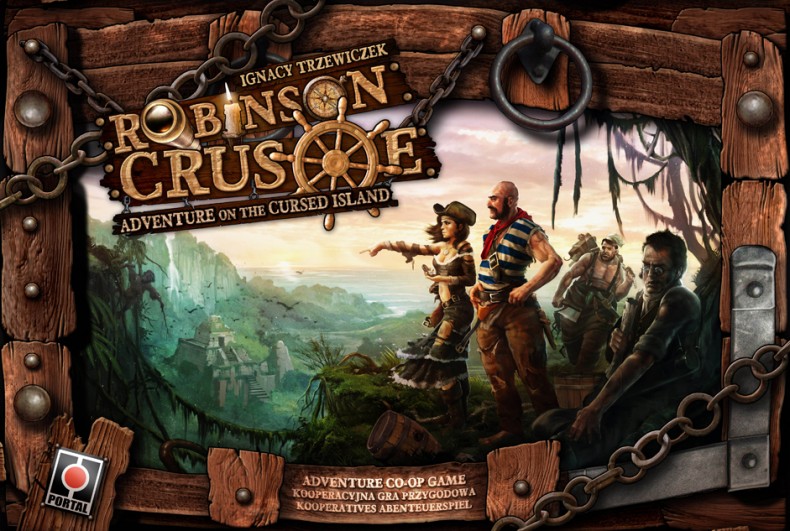 This is telling wonderfully tense stories.
A big box brimming with components and ideas.

Incredibly steep learning curve to entry, this is certainly not for beginners.
The rules, they're a valiant stab at trying to get you going but fall short.
The game is punishing and certainly not for everyone.

As long as you're prepared for just how unrelenting and punishing this game can be and embrace that you're in for a heck of a time. The sense of achievement upon successfully surviving the adventure is worth the admission alone.

The Co-op game, its sole purpose apparently to ruin a perfectly good evening and get a group of friends arguing. Despite this impediment, they’ve gone on to become a popular and thriving sector of our hobby. Essential they are all evil piles of cardboard, cards, and cubes intent on making everyone’s life a bloody misery. But we do love them don’t we.

Then along comes Iganancy Trzewiczek to spoil all the fun with what is probably the grand heavyweight bastard of bastard hard co-op’s. Robinson Crusoe is like a box of distilled malcontent evil personified in a right awful cardboard shit bag. It just sits there goading you from the shelf waiting to take any goodwill, enthusiasm or hope and pummel them into the ground like a twelve-year-old bully loose among a class of kindergarteners. 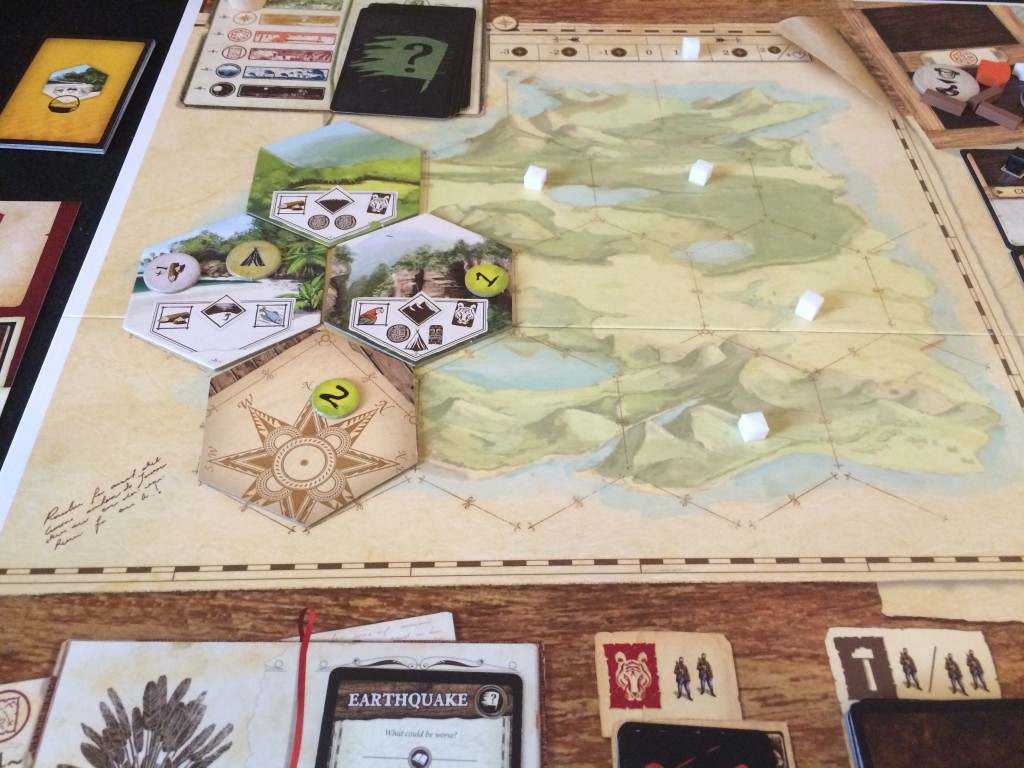 You may be mistaken by approaching this game expecting wholesome Disney japes on a jolly little island complete with white sands and postcard palm trees. No, think of this more as Robinson Crusoe by way of Joseph Conrad with a hearty chunk of 70’s Italian mondo exploitation cinema. Crusoe is a fascinating, complex and ruthless experience that has amassed a body count among my many plays to rival Schwarzenegger in his heyday. And like those grainy video delights of the 80’s it’s a guilty pleasure with which I return regularly and always leave the experience with a big dumb smile on my face.

A word of warning. This can be a complex game, the relatively slim but wordy rulebook appears at first to do an adequate job of getting you going. However, as you progress through the six included scenarios mechanics start to grind noisily against one another followed by the questions and furious consultations of the text, soon it becomes apparent that there’s some explanation missing. And while the manuals inadequacies can’t be ignored in truth it never had a chance when faced with the spiraling array of variables that the game erupts like a soundly beaten pinata. Fortunately nestled deep in the labyrinthine depths of BGG resides a Hitchhikers Guide To The Island FAQ diligently waiting to allay your confusion.

Now while all this scuttlebutt of CliffsNotes instructions and dense gameplay is correct, every round you do follow the exact same steps to resolve all your actions. Once you’ve mastered these, the mists of confusion waft away and you can get on with enjoying the experience. 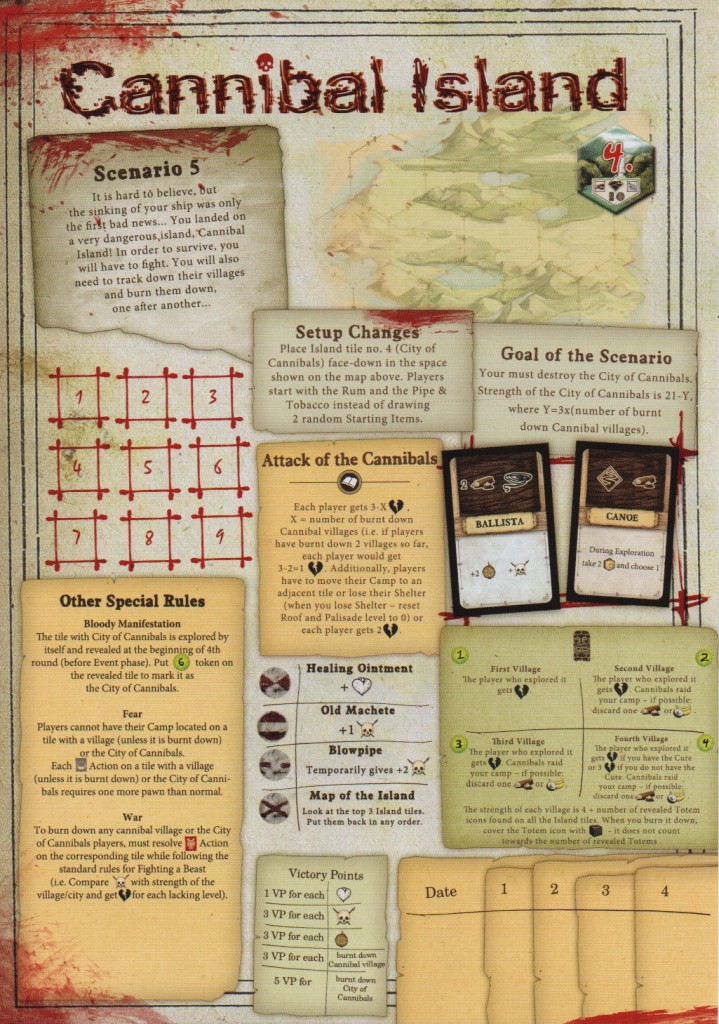 Each of the games scenarios comes with its own reference card artfully themed to set the scene. Each functions as an addendum to the rules including specific setups and equipment. Cleverly these also customize how much of the games components function completely altering the effects of tiles and tokens you will encounter during that specific story. It’s a neat idea which enables significant altering of the gameplay in fascinating and quite different ways while not tinkering with the primary rules it’s a really simple yet effective piece of design.

Now I’ve never been a fan of regurgitating condensed versions of rules in reviews, it can be a bore. However, there’s a lot going on here and to stand any chance of the rest of this review making any sense we’re going to have to touch on some of them. So you’re forewarned, you can skip ahead, but that’s not going to help as I will deliberately reference the following paragraphs just to infuriate all you skim reading sons of bitches out there. 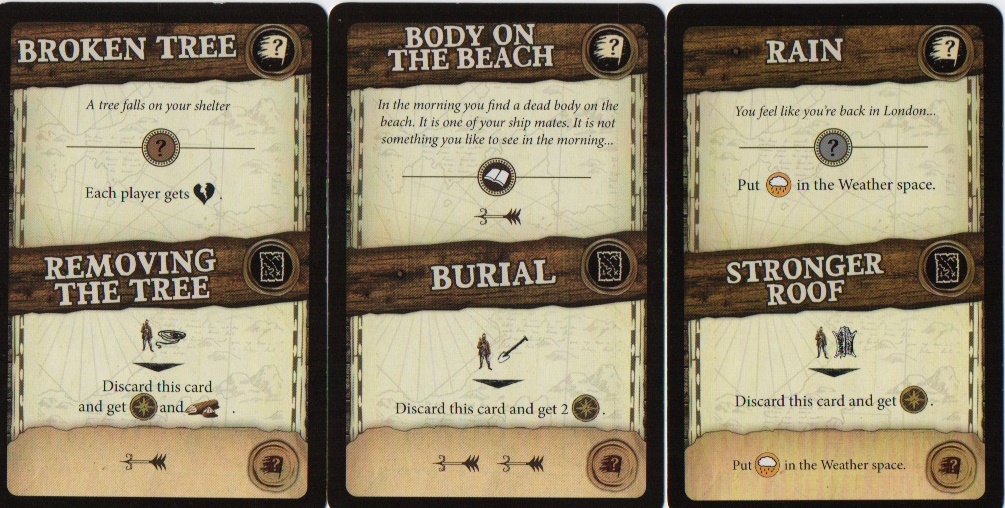 Each round breaks down into phases, some are just bookkeeping exercises while others involve hard decisions and suffering with the repercussions.
First up is the Event Phase. An Adventure card is drawn from the deck presenting a dour situation and an instant negative effect on the game, some also feature icons relating to the scenario further compounding the misery. There is always a way to alleviate this carnage in the form of an action that can be taken later in the round, but as we’ll soon see that is not an easy decision. And just for extra giggles they become time bombs queuing at the bottom of the board, that when pushed off by subsequent cards give the knife one final twist. Each card not only oozes story with their stakes-raising cliffhanging situations but also passively aggressively forces you to gamble with how long you’re willing to risk leaving them before having to do something.

After all that ruckus it’s time to settle down with some accounting as we balance the camp’s morale. If you’ve assembled some happy campers, you gain Determination tokens which function as a sort of karmic currency used for your characters special abilities or rerolls of the dice. Then things come over all Euro in the production phase where you scrape together the meager offerings of food and wood from your camp location before it’s off to the Action phase.

Here is where the dark beating heart of the game lurks in a worker placement by group vote. Once again this simple process is fraught with dangers but first you must agree on whose dealing with those Adventure Cards, building, exploring, gathering resources, hunting or staying at the camp to rearrange the twigs.

If only one worker has been assigned to a task, then you have to roll the three dice relevant to that challenge. Like ill-tempered doppelgangers of Donald Ducks nephews, these dice have got it in for you. Bumpy dictate’s if you receive any wounds during your hamfisted attempts, Lumpy decides whether you actually managed to complete what you were trying to do in the first place and then there’s Turd. Turd is unbridled chaos concentrated into a die while most of its faces are blank scattered among them are “?” and trust me when I say you don’t want to roll those. 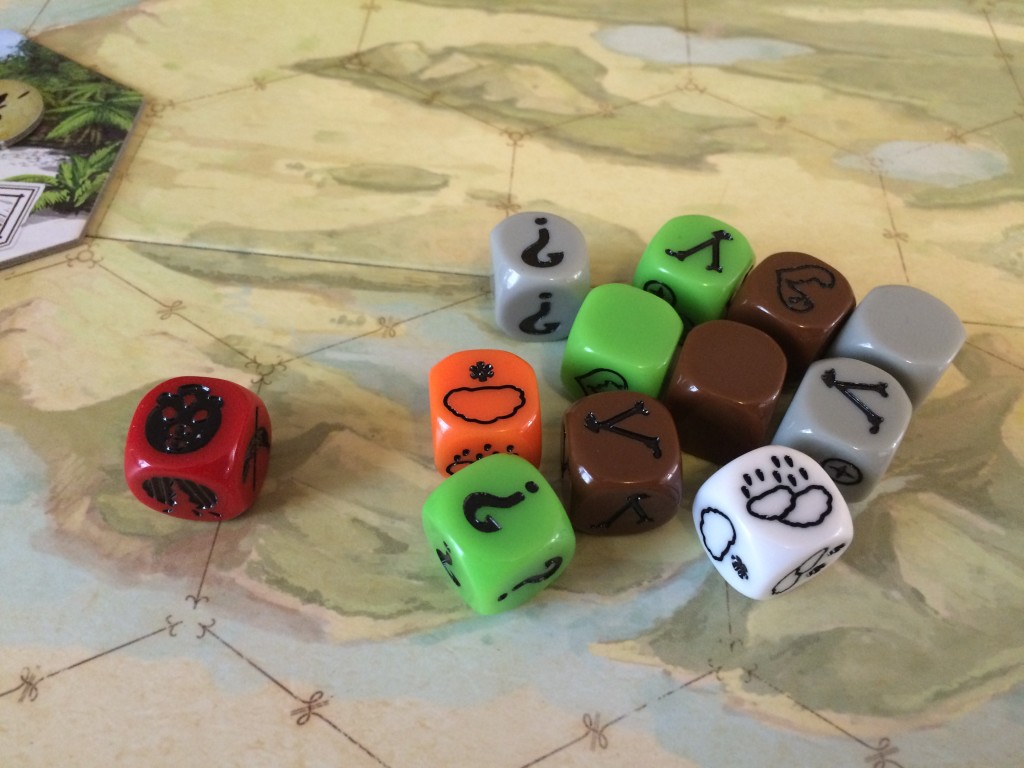 What then if fate takes a dump on your plans and a “?” is rolled. Well, each task has its own deck, like the Adventure cards they come with two surprises. The top half will set the scene, maybe a rampaging Gorilla has blustered into the compound, or you’ve found a snake in your boot. There will be an instant effect detrimental to the camp your equipment or even you. Unfortunately, that’s not the end of it. These cards are then added to the Adventure Deck it’s given a shuffle and you then get the agonizing wait for them to reemerge. Eventually, the repercussions of your clumsiness will catch up with everyone. That snake bite from earlier yeah, well it got worse, and now your friends are holding you down while they lop off the septic bit. 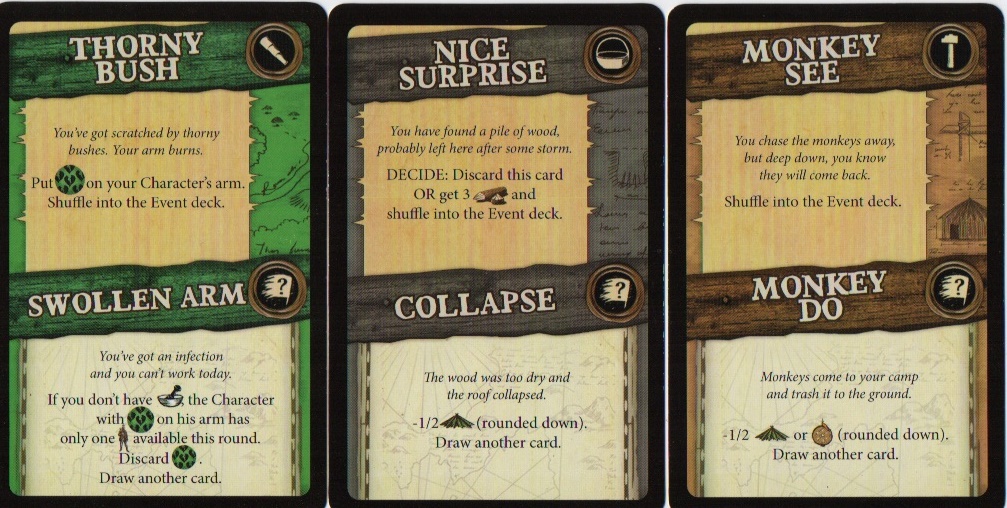 This mechanism adds a punishing push your luck element to these tasks, do you concentrate your efforts thus limiting what you will accomplish to guarantee success or spread your efforts in the vain hope you’ll get lucky. And the game knows to stand any chance of successfully accomplishing everything your require to survive you’ll going to have to gamble. It waits like a benign psychopath for you to get careless or desperate enough to try and then has its sadistic fun.

Now if you thought for a moment that all this adventuring and high jinks were all you had to worry about than think again. Because following a hard day of amputation and gorilla wrestling, there is also the little issue of dinner. Hopefully, you had the foresight enough to snatch some coconuts to feed everyone, if not then you can serve up a further plate of misery.

So knackered, famished and that leg stump smelling faintly of almonds now at least you can settle down for a peaceful nights sleep… um, not sure how to put this. Well no you won’t.

Now it’s the bloody weathers turn, yep more dice serving up a delectable assortment of fog, snow, driving rain and hurricanes. The elements hit in the final third of most scenarios and this looming dark cloud will decimate any camp that hasn’t been adequately prepared. If all you have for protection is a large leaf and a scattering of twigs expect a cheery dose of hypothermia with a side order of death. Bear Grills would last about two minutes in this place I’m telling you.

And after all of that you get to do it all again… Wait where are you going. 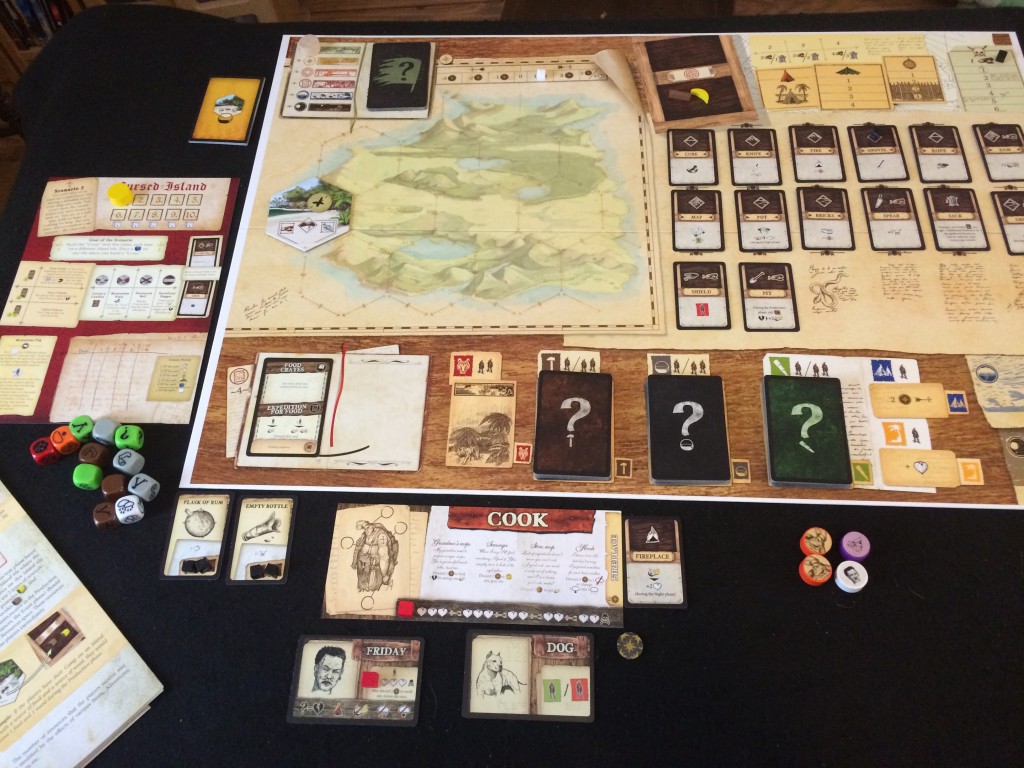 So that may sound like an unrelenting misery inducing horror show, and in truth anyone not versed with the brutal nature of most co-ops will sensibly bolt when first faced with this monstrosity. But even as you panic and stress and invariably perish you know what else is happening you’re having a riot. To survive you have to work as a team if you try and go it alone then the story of you will be short. Coming at this from my video game roots it’s like one of those old-school platformers, or for more modern audiences Dark Souls. It’s going to kill you and often, but slowly you can learn from those mistakes. When you finally manage to get off the bloody island there is a real sense of accomplishment, you’ve seen the heart of darkness and can easily understand why Kurtz came over all Marlon Brando.

This is a complex and at first indecipherable stew of Euro, worker placement, choose your own adventure, sandbox, and survivalist training tool. Ignacy has literally thrown the kitchen sink into the box with mechanics and rules wrestling and tripping over each other to create this gloriously insane perfect storm. Your first plays are going to be head-bangingly frustrating every time you think you have a handle on things you’ll spot a missed rule or be forced to dive into that bloating FAQ. Then around the third or fourth play the clouds of confusion clear and with this new clarity it becomes personal and you’re battling the game and you want to win. It’s an unrelenting bastard and if you gouged at its flesh, I guarantee you’d find the metallic endoskeleton of a remorseless killing machine waiting beneath.