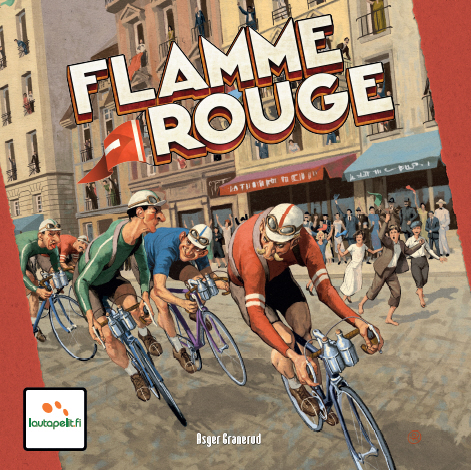 Easy to teach, satisfying both to families and hobby gamer's.
Quick, fast and most importantly fun.

The rule set is quite basic, those looking for deeply tactical thrills will be disappointed.

This was a delightful surprise, its a huge dollop of fun. Its like a dilution of race games featuring some really cool but simple mechanisms and plenty for the hard core player to wrap their head around if they wish, or a whimsical bit of fun for the kids. Hugely enjoyable and highly recommended.

Cycling… Not really all that exciting is it? I’ve done it, I mean its like riding a bike. Right?

So when I was first approached about the idea of taking a look at the new cycling game by Asger Harding Granerud designer of 13 Days: The Cuban Missile Crises I was all like yeah OK, the theme for me held all the thrills of a lukewarm baked potato.

And for the record, I like racing games I love me some Formula D, but that has dice (lots of em) and little gear sticks and stuff and this well it had cards.

Don’t let that put you off I’m a curmudgeon and proud and will if nothing else challenge a game to prove me wrong….

OK, so I was wrong… Dagnabbit! Flamme Rouge which for you cycle heathens relates to the red flag announcing it’s the mad dash to the finish, time to nut up or shut up. Over this final kilometre skirmish, heroes are made, and legends forged so what better point during a cycle race to set a game. 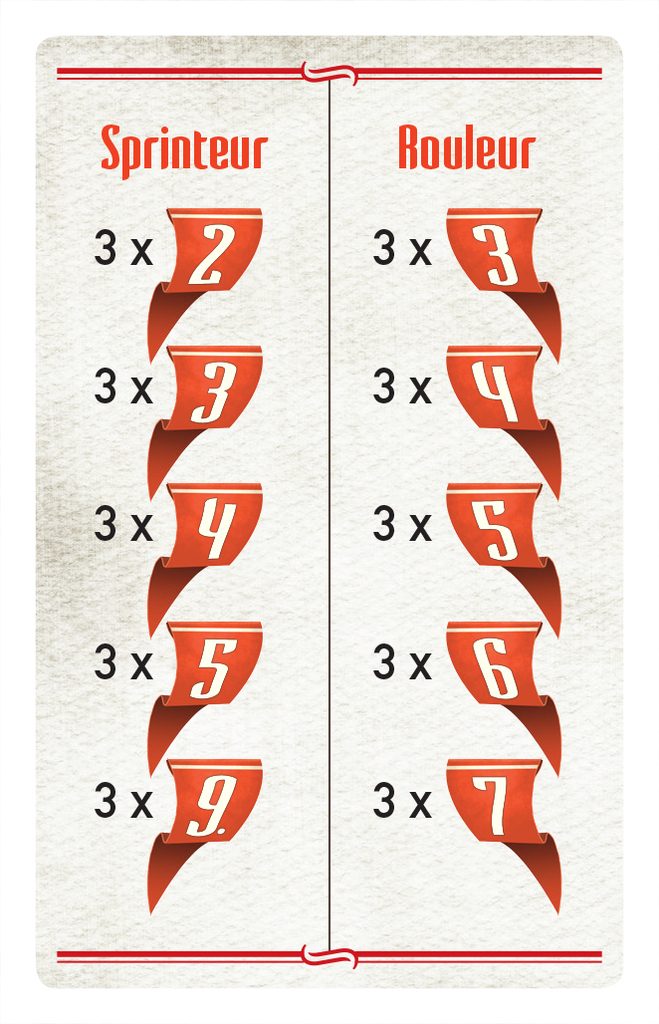 In the game, each player controls two cyclists the Sprinteur and Rouleur think of these guys as the Hare and Tortoise of cycling tropes. Each has a separate deck of cards relating to the distance they can travel during a turn the difference between the two is the sprinteur has 2’s, and 9’s whereas the Rouleur has 6’s, and 7’s with both racers remaining cards running from 3 to 5. Look there’s a reference card that shows you.

During a turn, you decide on one of your riders draw four cards off their deck and pick the one to use, the others are returned face up beneath so you know when a reshuffle is in order. This is repeated for your other rider and then everyone reveals the cards played moves the models on the board and then here’s the interesting bit, the cards you just used are discarded out of your deck.

That in itself is a cool mechanic with slowly diminishing decks reducing your options on subsequent turns and trying to gauge when best to play your higher or lower cards, gambling on the best time to break from the pack or hang back. However, two more additions add the twist of lemon in this, particularly zesty cocktail.

First, there’s slipstreaming, starting from the back of the pack any models with just one space between them bunch up, and this is carried forward to the next cyclist so with careful positioning you can crawl up towards the front of the pack for free. Thematically the board will quickly start to mirror the packs of racers as seen in the real Le Tour on telly, I say this with complete ignorance, but I’ve definitely seen them all bunched up and watched in anticipation of some numpty in first crashing and causing a massive mountain of spandex and human. And then there’s exhaustion, any model with two or more empty spaces in front of them at the end of a round has to draw an exhaustion card adding it to their deck and with these only offering a distance of 2 when played you really don’t want to start filling up on them.

So what you get is this very simple but cool deck deconstruction mechanic that with practice can result in you streamlining your cards down and gambling when best to play the big ones, or a complete and utter disaster where your cluttering it up with handfuls of horrendous exhaustion cards resulting in your cyclist resembling an asthmatic snail.

And it all works wonderfully and feels incredibly thematic, while you can shoot off away from the line playing your high cards you’re going to start to bloat your deck with these useless exhaustion cards which you’ll eventually have to play to thin your deck giving your opponents time to close that initial lead.

It plays incredibly quickly is a breeze to teach the rules are basically four pages, and I’ve had huge success getting both the kids to play as much as my gnarly old gamer buddies. The best thing is it’s just tremendous fun and thunders along delivering excitement and thrills with satisfyingly weighty decisions in an itty bitty playtime. It is one of those rare exceptions when you’ll finish a game and instantly go again.

This lands the game in that sweet spot so hard to pull off, something for all ages and all types if this doesn’t find itself on the short list for the Spiel Des Jahres next year I’ll take it very personally.

But there’s more. Included are different track layouts which use the flipside of the boards and advanced rules which add just a dash of tactics without bogging the game down with the addition of mountains. These penalise riders trying to climb up them limiting the maximum speed to 5 and not allowing the option to slipstream. The descent works equally well and rewards you for efficiently reaching the peak and zooming down past your unfortunate opponents by making any card played an instant five. 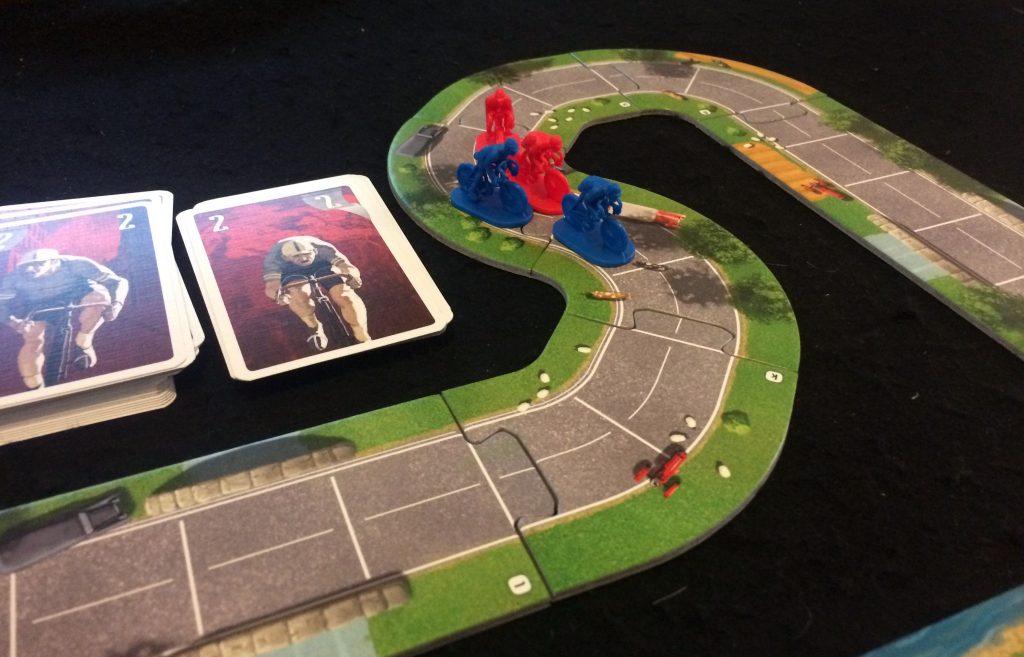 In Asgars design diary he described how the first itineration of the game had a lot more tactical bloat and rules, kudos to him for jettisoning these in favour of opening up the game to be enjoyed by anyone. However, those still looking for a little bit more can download his Grand Tour rules that present a campaign mode and cyclist abilities for that extra challenge. I’ll be incredibly surprised if we don’t start to see tournaments of this popping up at game conventions in the coming months.

The art and design are effortless, I dig the 1930’s stylings of the characters, and the whole product is handsome, colourful and enticing. My criticisms are really nitpicking initially the minis can be a little tricky to tell apart, and the lack of any rules for the bends in the track seems a missed opportunity for a deeper more tactical play. I understand why that’s not here and as it stands the game has plenty of scope for growth, and I anticipate an expansion to be announced down the road. 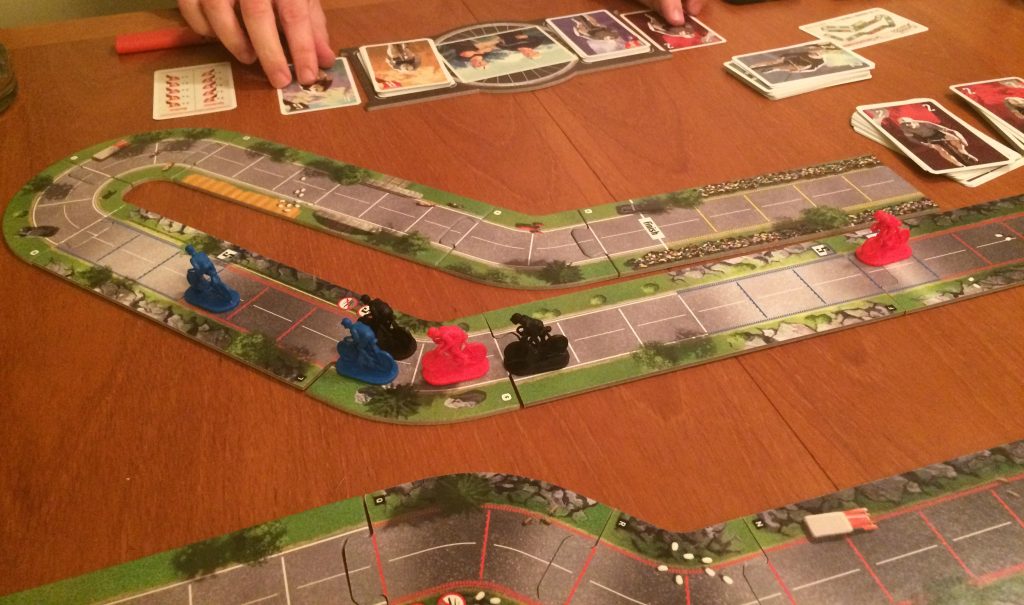 This is bloody brilliant stuff its blend of mechanisms and theme are just effortlessly spot on, and while at first glance, it seems a simple little diversion a huge amount is happening just under the surface. Between trying to remember what your opponents played, gauging which one of your racers to choose first, where to place them will you slipstream what cards did the others play? For something that feels so light and breezy, it’s a hugely satisfying experience and most importantly fun. This comes highly recommended.