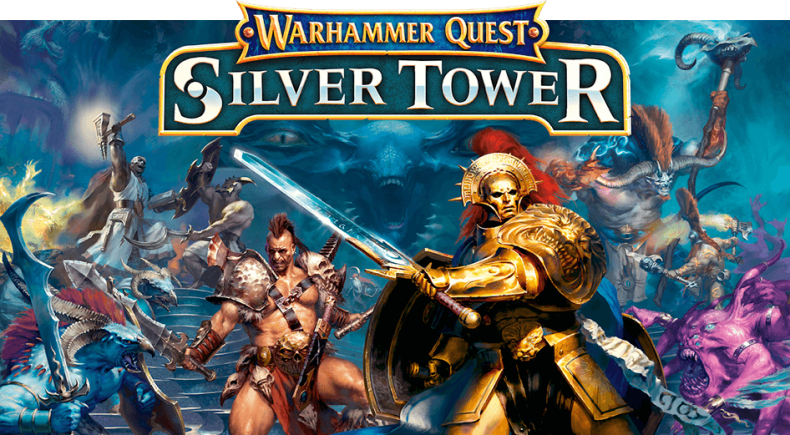 I love the original Warhammer Quest. I mean really, really love it. I’ve even written about how much I love it on Prepare For Boarding (did you spot the shameless plug? I think it was pretty subtle). So when Games Workshop announced they were releasing a new version set in the Age of Sigmar universe, I was hit with a heady mixture of excitement and apprehension. Naturally, I was delighted to see them revisiting a classic, but I was also concerned that we would see an obliteration of the rule system that made the game so enjoyable.

Aesthetically, this is everything you would expect from a Games Workshop product. It is a thing of twisted beauty. The miniatures are marvellous, with plenty of detail and the sort of stylings one would expect from the dark fantasy background of Age of Sigmar. I particularly like the Mistweaver and Grot Scutlings. Older gamers will also appreciate the Chaos Familiars that harken back to some of the classic 3rd edition miniatures. 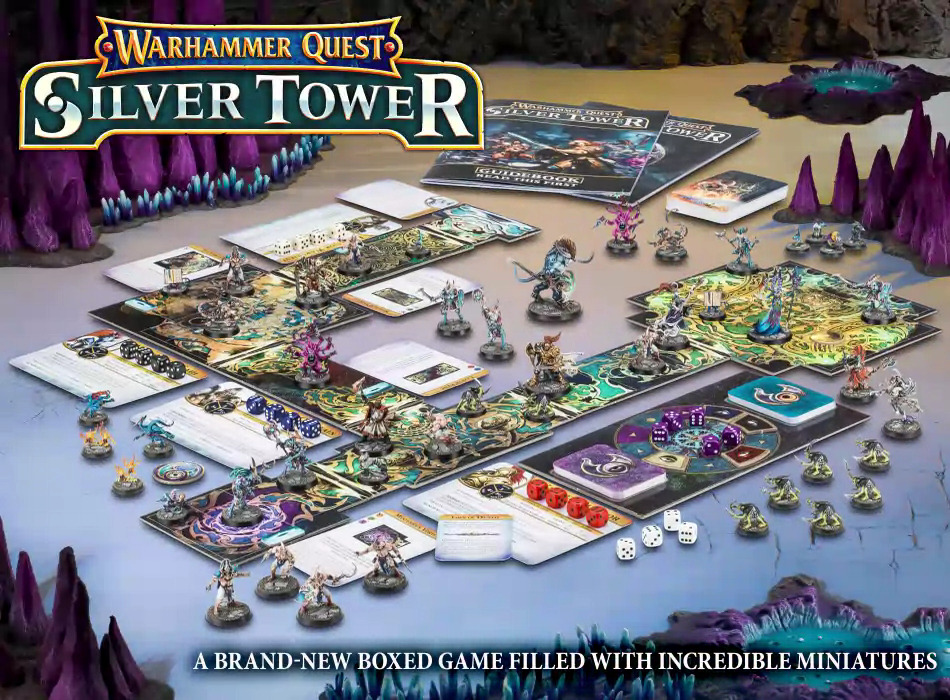 The components are similarly extravagant. The board tiles are detailed and textured – each room has its own unique feel to it. The card stock is of good quality. My own personal gripe relates to memories of the original and its 3-dimensional archways. Why couldn’t we have something similar, especially when you have monster spawning portals in each room? Even a cardboard standee would have done, rather than the small tile that we are given instead.

And then there is the other immediate consideration when you first see the game – the price. Its £95 direct from Games Workshop. Ninety-five pounds! I know this is Games Workshop, and we are used to some interesting pricing, but I’m afraid that this puts me off almost straight away. Think about the other dungeon crawlers available. Descent – cheaper. DungeonQuest – cheaper. Super Dungeon Explore – cheaper. Even Imperial Assault if you want a sci-fi theme is cheaper. Essentially I am spending an extra £20-30 for nostalgia. It’s something that you would need to decide whether it was worth it.

Getting beyond the initial appearances and into the games itself, we find a curious mixture of Age of Sigmar rule, with some of the classic exploration parts of the original. The dungeon is still created from a deck of cards, meaning that part of your exploration is random. The quest will dictate to you the cards that are utilised, so there remains a degree of control over the general shape of the dungeon and the objectives. There are also treasure cards, just like in the previous edition, which you are instructed to draw at various points to represent your ill-gotten gains.

This version of Warhammer Quest features a second set of cards – the Skill deck. Whenever a hero gains a point of renown; either by slaying an enemy or by completing a special condition on their character card, they move a marker around a circular track. Once around the track and you can take two skill cards and chose which one allies to your character. Individual cards will give bonuses to characters with certain keywords, so suits some better than others. This replaces an experience point system for levelling up. It remains a system I am split on – the triggers are simple if sometimes random (such as rolling a six on a particular dice). However, the speed with which you can gather experience feels artificially quick.

The real elegance with this game lies with the action dice system. Each hero has four dice which they roll at the start of the turn. They then assign these dice to various actions each character can take. However, each action has a trigger number. A simple action like moving or swinging a sword needs a dice that is 1+. A more powerful attack might need a 3+. There are unique abilities that require numbers higher than this. Moreover, these dice also act as wounds, so damage has a direct relationship on how a hero will perform. Heroes can be stunned and lose a dice for a turn, or take permanent wounds that mean the dice are lost to them until they heal. Playing a seriously wounded character through a combat is a nerve-wracking experience as it should be.

As players could get unlucky during a turn and roll nothing but 1s and 2s, each turn the 5 destiny dice are rolled. These act as a communal pool of dice from which the players can take for extra actions. However, once a player takes a dice from the pool, it locks another dice in place, preventing that dice from being taken until other players take a turn. Therefore the first player each turn (which does rotate through the heroes) cannot burn through all the dice themselves. As, when any multiples are thrown on the destiny dice, those dice are discarded, and there runs the risk of an unexpected event occurring.

Combat works very similar to the Age of Sigmar games – the opinion of which will depend on whether you like the game or not. Each attack has a target number to hit and to wound. Reach both of these, and you inflict wounds to the monster equal to the weapons damage – which also can be random. Do enough wounds and the monster dies – simple. The monsters attack back in the same fashion, to which the heroes will have saving throws allowing them to try and ignore the damage. As a result, combat flows quickly, but there is little interaction between the attacker and the defender. A tougher defender is simply measured by the number of wounds it has – not by how hard it is to hurt in the first place. It feels as though more complexity could have been brought in at this stage without slowing it down too much.

The game also runs without an antagonist player – a random behaviour chart controls everything the monsters do under the monster description. So the monsters could scrabble to attack you, shoot you with missile weapons or even flee depending on the creature type. The attacks remain as deadly as the older version of Warhammer Quest – you need to manage your positioning carefully to minimise the damage coming your way. But the tables do unfortunately lead to situations where monster may not do anything. The vicious beast before you might be forced to take an action that is impossible based upon movement or location on the board and just end up looking slightly silly. A great relief to the players, but it can ruin the immersion.

The quest of Silver Tower is a fairly generic “recover the part of the enchanted McGuffin” affair. At times you are sent to refer to passages in the game book, giving parts of the experience a ‘choose your own adventure’ feel. But the fact that each entry comes with some lovely flavour text and it lends itself to some fantastic immersion. 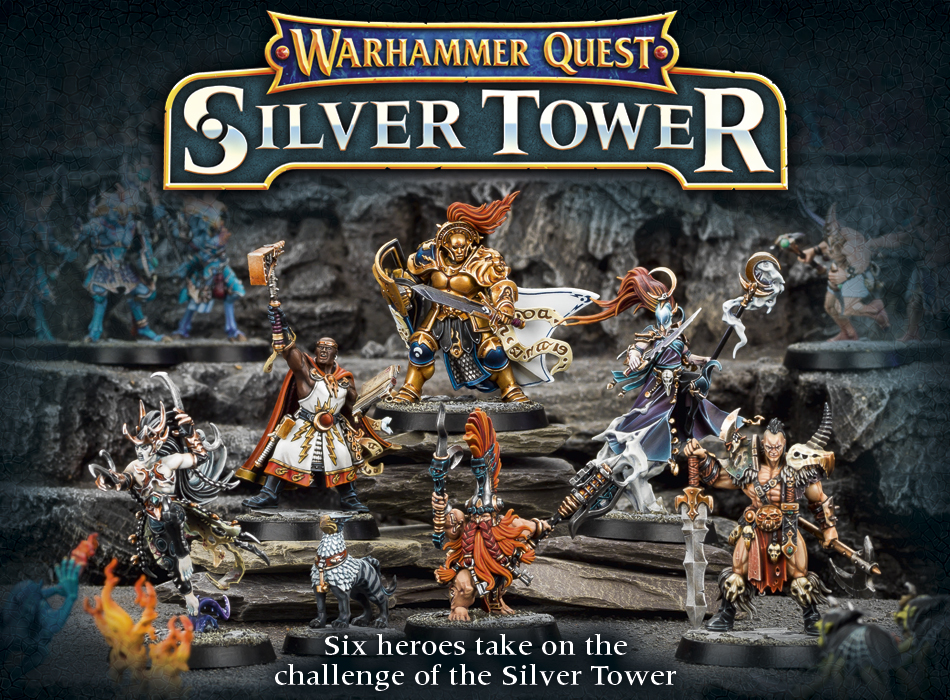 This sense is carried over into the heroes, each of which feels distinct. You have some tropes for sure – the Barbarian, Knight, Dwarf and Elf. But each is given a different feel with an Age of Sigmar slant on it (which I know some people will hate based on their opinion on Age of Sigmar. So the Barbarian is a Chaos warlord thrown into an alliance of convenience with the other heroes. The Elves are either a Shadow Mage or teleporting assassin. The cleric character comes with a pet that is half dog/half eagle. It’s flavoursome and yes, a bit barmy … but in a magnificent way.

Furthermore, if you chose to make some purchases, Games Workshop has given you the opportunity to bring other characters into the Silver Tower. Several of their Age of Sigmar models have rules to allow them to become heroes in the adventure – including odd choices such as Orcs, Skaven and other Chaos models.

As a result, the game can feel like a random, weird and psychedelic mess. And it works because of it. You have so much replayability and varied options open to you, with the combinations of cards and random rolls giving you a fresh experience every time.

Has it replaced the original Warhammer Quest for me as the greatest dungeon crawl of all time? No – it hasn’t. But it has had a good go at it. Silver Tower is much quicker to pick up and eventful – the action is utterly relentless. But it has rough edges and big sticking point with the price. If you can justify the expense, I am pretty certain you can have a lot of fun with this.