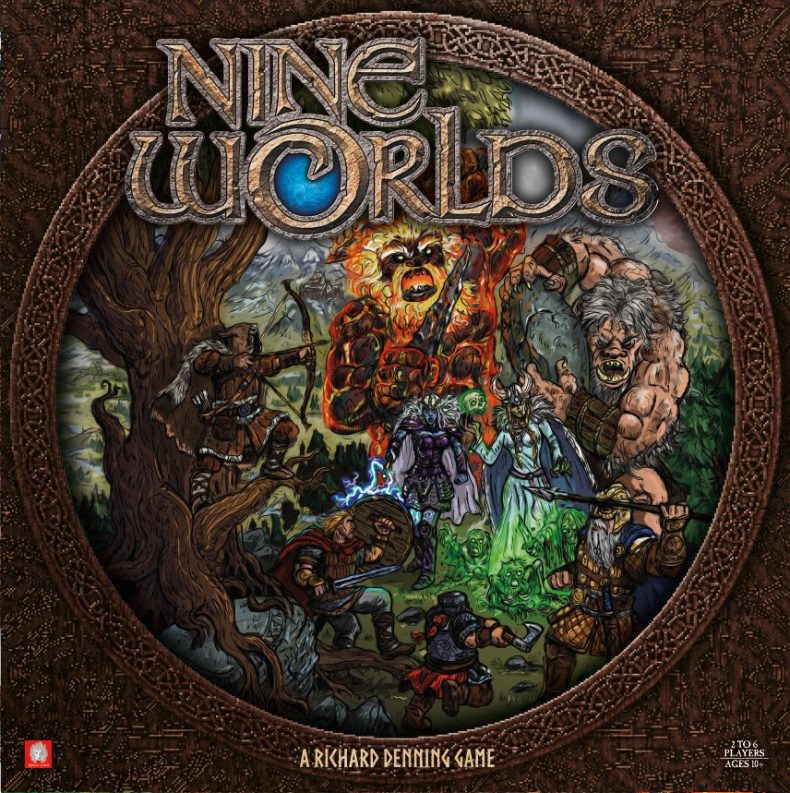 A handsome board and a plentiful amount of emergent strategies and tactics.

The rules do take more than one glance to grasp. And the whole scoring part is just a fuss.

This was a tricky game to pin down, after my first hour of play I was ready to throw this under the bus. And then you do something really dickish and hugely satisfying and it grows on you, and then it grows some more. There is an abundance of riches to be found if your willing to get your hands dirty and do some digging. Fans of abstracts will lap this up, Euro players will find a lot to enjoy and yet its also a war game, if anything it does too good a job of juggling all these disparate elements into a whole. I would say anyone who was disappointed at Blood Rage's expensive toy factor may well find something to enjoy here.

Vikings are the new black. The zombie hoards having finally taken a dirt nap for the time being, although I fully anticipate some zombie Vikings in the not too distant future. So last year we got the extravagant toy filled fun of Eric Lang’s Blood Rage followed by an invasion of other violent Scandinavian tourist themed titles running the gamut from heavy euro to dice chucker.

So it is that we find ourselves once again aboard our long boats for another bit of Viking fun with Richard Dennings latest.
Set against the backdrop of Norse and Anglo-Germanic Myth you play as a Viking God/Warlord your armies marching out to capture and control the Nine Worlds of the title. The key to the game is holding these areas as they gift snazzy powers that can be used to manipulate the battles smite your foes and just a catalogue of enjoyable dick moves.

Before I dive into the nuances of this one I’ve got to say this is a really hard game to tie down to a specific genre or mechanic it’s this smorgasbord of an abstract/euro/war game. The board and chunky player markers convey a suitably Nordic theme at odds with the rest of the components essentially a pile of glass beads. Don’t get me wrong the theme is in evidence but aside from the handsome board, everything else could just as easily have been switched for any fantastical setting without greatly affecting the overall feel. 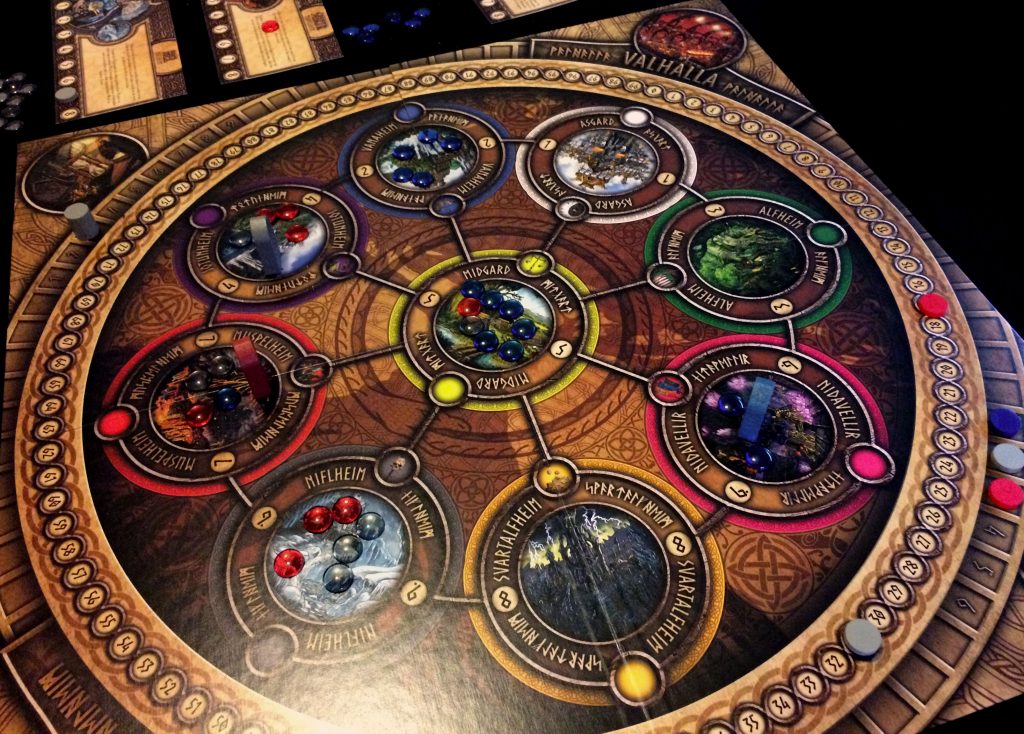 And as we’re dealing with look and components, on the whole, this a step up from Richards last release Tinker, Tailor in itself a really solid card game but with just the gosh darn worst art ever. Here at least everything looks good, personally, I’m still not sold on the art and character design but as it’s used sparingly I can take it or leave it, the board it has to be said is a handsome beast its an easy sell believing a bunch of Viking chieftains could have settled around this during those long winter months when not raiding for a bit of fun. But enough with this nitpicking lets get on with the show.

So to recap this is a game of area control and battling for domination across the Nine Worlds and using those powers to keep them.
To successfully accomplish this you’ll need to budget very carefully how you spend your action points in the most cost effective way.
On a players turn, you have a choice of multiple options, these are everything from placing your armies on the board represented by the coloured lozenges or moving them or your player marker around. There’s nine of these in total and it’s here where I had my first issue with the game, there are a couple of instances of the mechanics feeling under-baked.
Massing your armies is a real struggle, to get one of your stones onto a location requires you burning a point to put one from your reserve to your player card and then another one to move it from there to wherever your avatar is standing, you can just spend two points to dump one anywhere else on the board. There’s nothing inherently wrong it’s just it feels like an impairment at the start of the game in getting armies onto the board. I bring this up because it’s only when forces are clashing and occupying regions that the game starts cooking it’s a real head-scratcher that the mechanics are a cock block to getting to the good stuff. 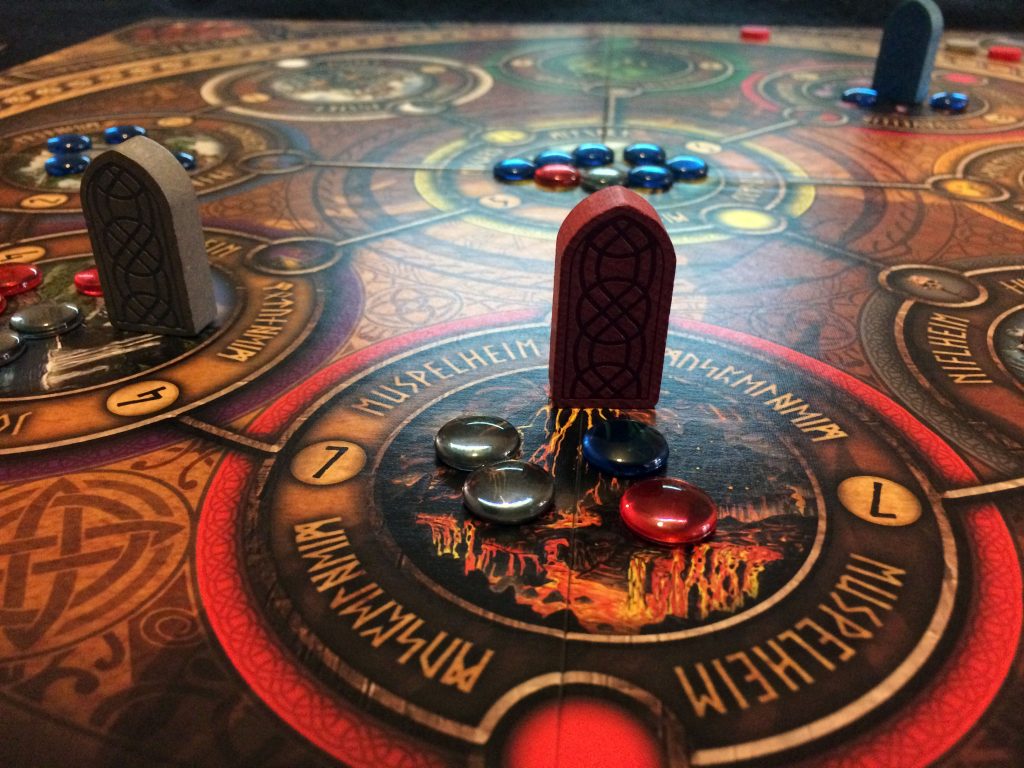 It’s not a deal breaker but it means it’s around 3 or 4 turns before the game truly gets going, if you’re playing the long version it’s not such an issue but the recommended shorter game (for first timers) is only six turns which could result in over half your game wasted just moving pieces about. It’s a slow burn, a thinky game but something to populate the board and get the engines running to enable players to get to the good stuff faster might not have harmed things.

Now on subsequent plays, this becomes less of an issue and the individual player powers often help with this. And although the rules say not to use them in your first game I’d disagree. In our first play, we took this advice and half way through the game flipped our cards and were all like “Damn! I wish I’d had that at the start”. They are on the whole really simple little rules and give each clan just enough of a asynchronous feel as to make it interesting. I’d never play again without them.

At the end of a round, each world is checked to see who has control of it and if any battles will occur. To control the world, you need to have the majority of stones, a battle occurs if there are more than five on it (of whatever colour).
The battles are interesting starting with the start player and going around the table players remove one of their stones from that contested location, this keeps going until only five stones remain. Whoever now has the majority following the fight puts one of their brave fallen onto Valhalla and the rest to their reserve. Valhalla releases after all the world powers have been resolved and those stones go back to that player’s home world scoring 2 points for each.

If there is now five stones on that world its power is activated and the player with the majority on it can use that ability, in the event of a tie Player markers split them.

Now at first that seems a pretty basic way of resolving a conflict, but there is a deeper level of strategy to this. Player order is hugely important to a fight, if you know your opponents going to be removing stones before you with a careful bit of forward thinking and some counting on your fingers under the table, its possible to whip locations away from under their nose. Likewise chucking one of your stones into worlds already contested can also cause larger losses for the battling armies or even force the count below the five meaning the powers aren’t able to be used. Really love this and its these little emergent strategies that constantly keep me reevaluating this one. 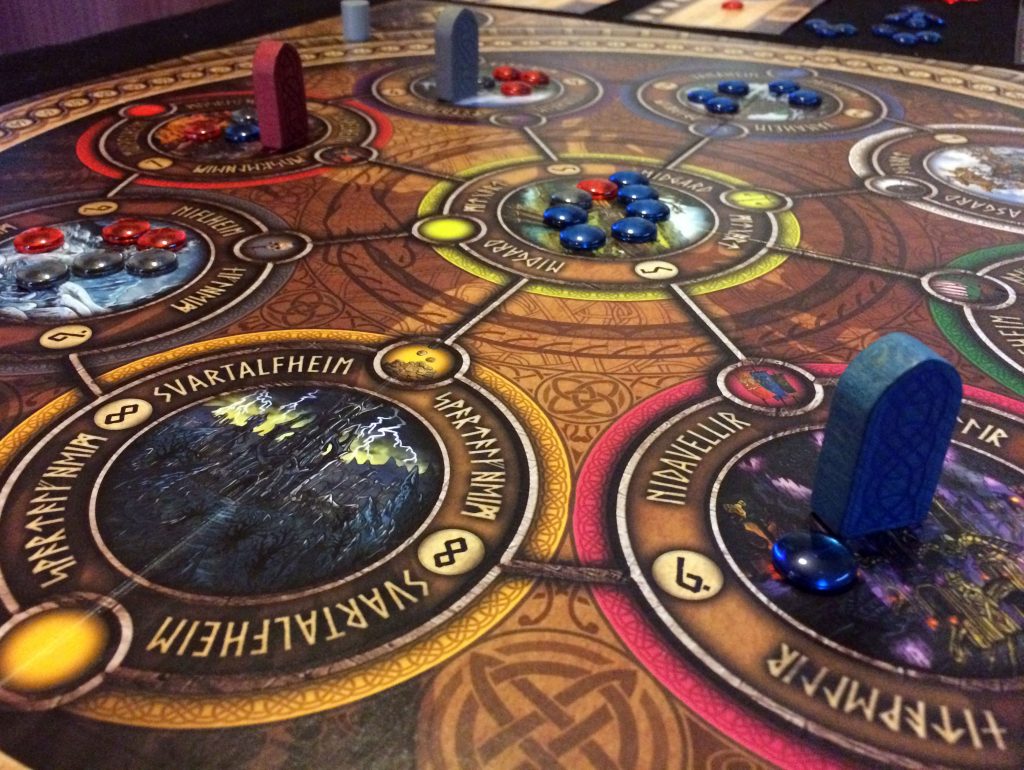 Every third round we score everything! much like the army recruitment from earlier again this feels unwieldy with you scoring over seven steps from everything from units on your player board, on the worlds, control of worlds, Valhalla etc. And some things are scored more than once. It’s like a Viking themed Stefen Feld fever dream. The problem is it just feels overly involved and fiddly and while I totally see that it opens up numerous strategies to score on, I think the same result could have been accomplished without it feeling like I was taking part in a junior accountants course.

We then work out whose first player this is dictated primarily who has the most armies on the board and then control of worlds tie break this.There’s also AP bonuses for the first player in four or more player games and of course there’s that whole battle resolution that can hang in the balance dependant on where you are in this order.

And that’s basically the game of you slowly pouring your armies onto the board and attempting to take as many worlds as you can.Like the aforementioned Blood Rage both these games share similarities and not just from the theme, there’s area control and god-like powers and careful planning of spending those action points, and the whole battling over the areas to hold them for rewards. But whereas Lang’s Viking blood bath is probably more like a thrash metal track Richards design comes across as something more stately like a Chopin melody.

This one was a real struggle to settle on an opinion, it’s literally a game of two halves. At first, I found the snail-like pace and fiddlier moments a complete turn-off but it has to be said after half time once the boards started to fill up and you’ll utilising those world powers and turn order to pull off some hugely satisfying dick moves on your opponents it suddenly comes alive.

There’s a solid game here that you’ll just going to have to work a little harder to uncover, it really rewards each return visit as the nuances of the scoring and the emergent strategies become clear. For the crowd who bemoaned Blood Rage not being a pure Euro with all its shiny toys there’s a great deal to love here.