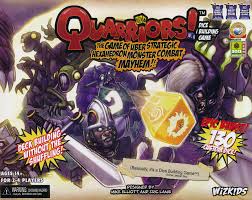 Some of the dice are of poor quality.
Retired by Marvel Dice Masters?
Needs expansions to give any lasting appeal.

Quarriors was a pretty neat idea and I still have a soft spot for it. Its hampered by the fact the base game is lacking and really needs the expansions to give it the depth missing from that set. For my money the Marvel Dice Masters game by the same designers has succeeded Quarriors with a tighter design and better theme.

If you love dice games and have a penchant for deck builders then this may very well be one of your favorite things, because Quarriors is both of these. Designed by Mike Elliot & Eric Lang and released by Wizkids back in 2011 the base set comes with a brain boggling 130 custom dice, now that’s a lot of dice. 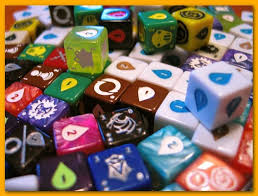 Aside from the bucketful of dice you also get a set of 53 power cards that work in tandem with those dice, and mix up the proceedings so each game will be a little different. 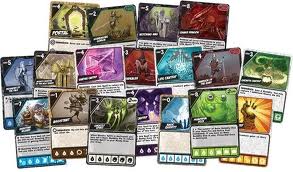 And the game itself is a pretty simple affair it essentially see’s you battling your opponents by gathering lots of creatures into you pool of dice readying them each turn and any that survive through to the start of your next round can be scored for glory dependent on the corresponding card. First player to hit the requisite glory score wins. Its really as simple as that. The rule book does its best to explain all of this but to begin with mainly befuddles and confuses as its a bit of a wordy mess, it works and does its job but it could have been made a tad more user friendly.

Each game is set up the same way by assigning the powers each dice has by pulling from the deck of cards, you get 3 spells by dealing from the deck the first 3 unmatched cards any duplicates are discarded and you keep going until you have 3 unique types. There are multiple cards for each the different types some stronger than others or with some special burst abilities so this adds a nice haphazard randomness to proceedings. You do exactly the same process for 7 creatures cards. So this is all cool, it means the set up process is quick and easy, the biggest pain can be matching the dice to the cards as each will have 5 of the corresponding dice put on them. There are also 3 basic cards that go out and are available in every game one of these refers to Quiddity which is the currency of the game. You then grab your starting pool of 12 dice that you pop into your dice bag these are 8 Quiddity and 4 assistants which are basic low level creatures. And then off you roll.

The game plays by you pulling  6 dice from your bag and rolling them, now to start these are either going to give you a Quiddity value your cash and probably a couple of the assistant’s.

every turn plays out in 5 stages

1: score creatures – any beastie active in your ready area from a previous turn can be scored for the value of glory on its corresponding card. Scoring also allows you to cull a dice if you want to streamline your pool, very handy later on to start to thin out your dice.

2: pull your dice out the bag and roll.

4:capture a die (basically buy an extra dice for your pool from the ones available)

5:Clean up, move everything you’ve finished with into your used pile.

You are going to be buying lots of creatures and spending quiddity to ready them to attack your opponents, the attacking is pretty straight forward its your creatures accumulated attack value against whatever creatures your opponent has ready. They defend in turn using the defend value on each dice and are chipped away at until either you run out of victims or attack.

And so on and so fourth, basically your using your turn to get rid of any creatures from your opponent so that he can’t score them for the glory at the start of his next turn and he’s doing the same to you, and that’s pretty much how it works. It has to be said this does all become a bit meh! And especially if all your pulling is quiddity dice and then getting bitched by yours rolls when your monsters are hitting the quiddity faces and not the fighting sides. This is when you need to learn to start thinning out your pool of dice, the white quiddity dice just clutter up your bag after awhile and its a good idea to start ditching them after you have a good fistful of the more powerful dice in your bag.

The cards are the clever touch with the differing power levels and separate effects will mean that each game has some variety and you will have to play to the strengths of what has come out of the deck, and its not just the the power of the dice effected some of the creatures come with burst effects represented by an asterix in the bottom right of the dice, these can be anything from giving you more glory to wiping out creatures from your opponents pool.

And that really is it, as you may have guessed due to the modular nature of the game it was ripe for expansions and indeed there have been 5 already, so if you enjoy this there is certainly a lot more fun out there to be had.

I picked this up because I love dice rolling games, and wanted something I could play with the kids. There is a ton of luck in this, and the old problem of the leader running away with the game, but really its pretty light and simple and the base game while fun can get a tad samey after awhile. I heartily recommend picking up the Quartifacts expansion which really gives the game some legs and fixes some of the issues of it all getting a bit repetitive and adds a much needed depth to your options each round (there will be a more in-depth review soon). 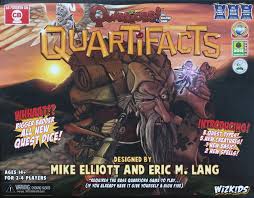 So should you get this? Well yes and no, I have a couple of caveats, if you do buy it I’d suggest snatching up the Quartifacts expansion alongside because it is really needed to add a bit more zing to proceedings, and the other issue that we have is The Marvel Dice Masters game is due to hit in April and I suspect at that point Quarriors will be seeing less and less table time. The Marvel game is from the same designers and looks to be Quarriors 2.0 with a rather spiffy Marvel theme. I want to recommend Quarriors as it looks so cool and there are all those dice, it just isn’t quite as great a game as it really should be. 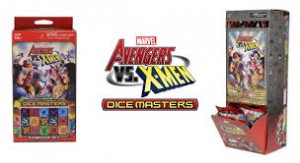 If you’re still on the fence then you can always pick up the IOS app that will at least give you a feel for the game, minus all those lovely dice. If you like that then you can go ahead and dive in.

Lewis & Clark
Be the first to comment!
Leave a reply »