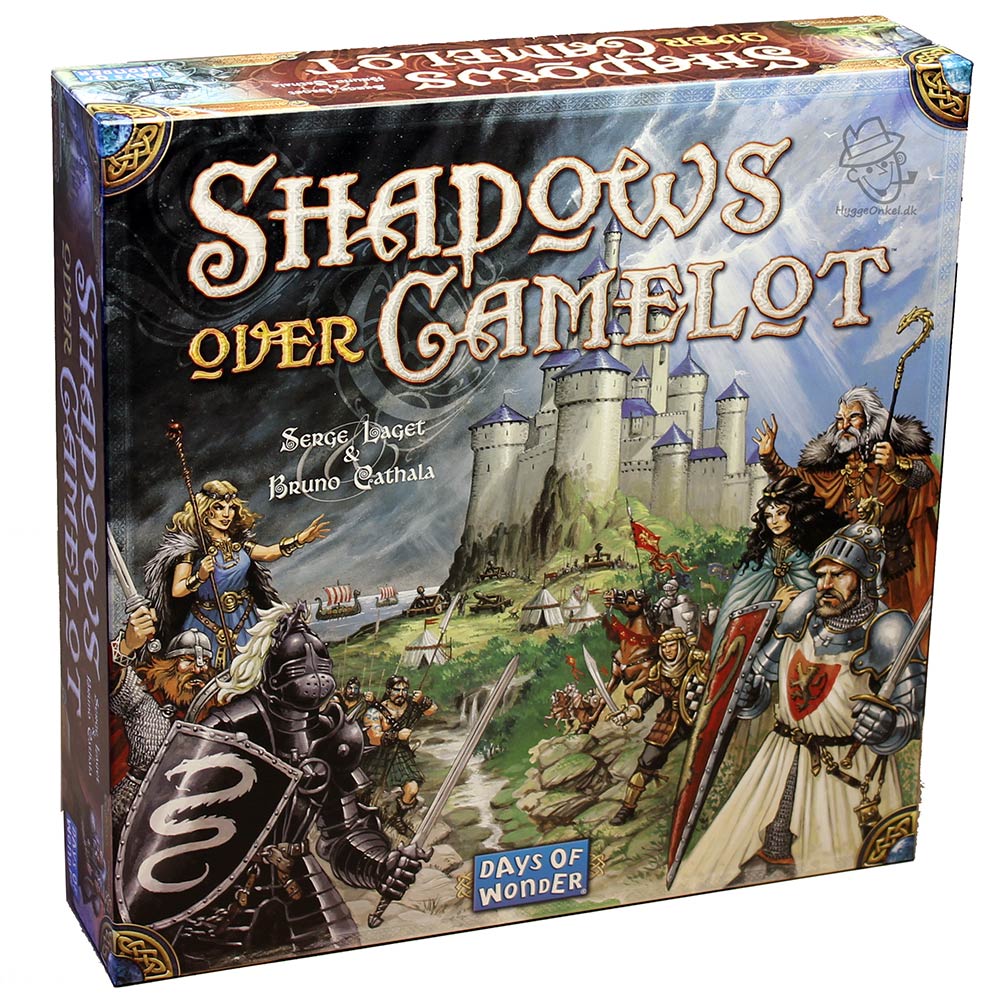 For something that is a bit of an elder statesmen of the board game world, Shadows still holds up pretty well.
Its easy to get to the table and looks gorgeous once its there if the theme appeals its a great entry into the co-op and traitor genres. Still a solid game.

Shadows Over Camelot is something of the elder statesmen of board games, its now the ripe old age of 9, which for board games whose ageing works something like that of a Pekingese makes it in about 98 by human years. So its a bit long in the tooth and by rights should probably be consigned to the composter, after all with all the new innovative games hitting what can this grand old codger teach us?

Well, Shadows is responsible for birthing many now commonplace mechanics and ideas into the board game universe like some teenage council estate single mother, although Shadows brood is bit more well behaved, and less likely to knock your wing mirrors off your car or spray paint a badly spelled expletive on your front door. 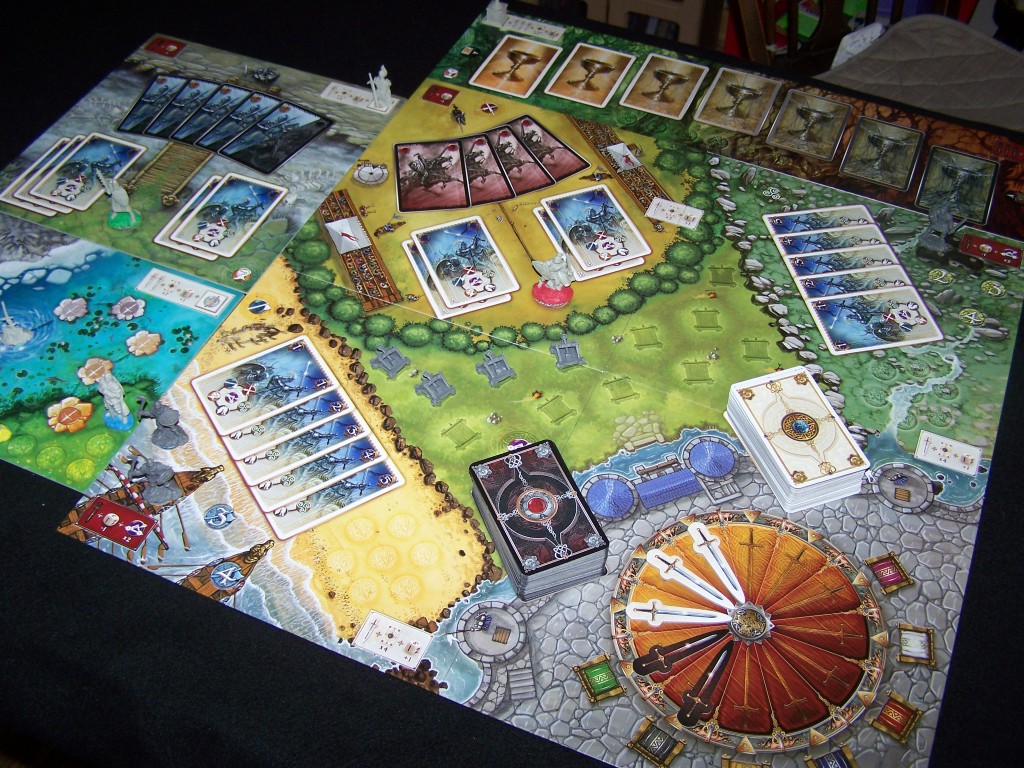 So what makes this so great then, well for starters the board and its components are just some of the best looking yummy stuff still even by today’s hi-def standards, there is a lot in this box and being a days of wonder release all of it is tasty gravy. It was also one of the first co-op games to come out from a big publisher and gets right a lot of the elements that subsequent games haven’t. Whilst its a co-op each player still has the freedom to control their destiny and make decisions which effect them as well as the group. Too often of late some of these newer co-ops just make you feel like a cog in some monstrous machine, with you just hanging around to hit the button at the right time.

And it also added a serpent in the mix that has become quite popular and an element I do love in games, the dreaded traitor mechanic. One of the cool things about how Camelot uses it, is the potential that if playing with less than the full 7 players then there may well not even be a traitor. But the prospect of one lurking and all the decisions that this game throws at you (most of them bad) means that even without the traitor, everyone is still going to suspect everyone else.

So whats all this Camelot stuff about then? Well each player is a knight hanging out at Arthur’s round table and you get to go out and do a variety of quests, everything from searching for the Grail, to fetching Excalibur from some watery tart to battling the evil Black Knight. Every turn a player must do two things one is bad the other good. The bad will be anything from losing a life, putting siege engines on the board or taking a card from the dreaded deck of dreaded cards of dread. The good stuff will be going questing, using cards, having a nap (healing yourself) or pointing at another player and accusing them of being the traitor. 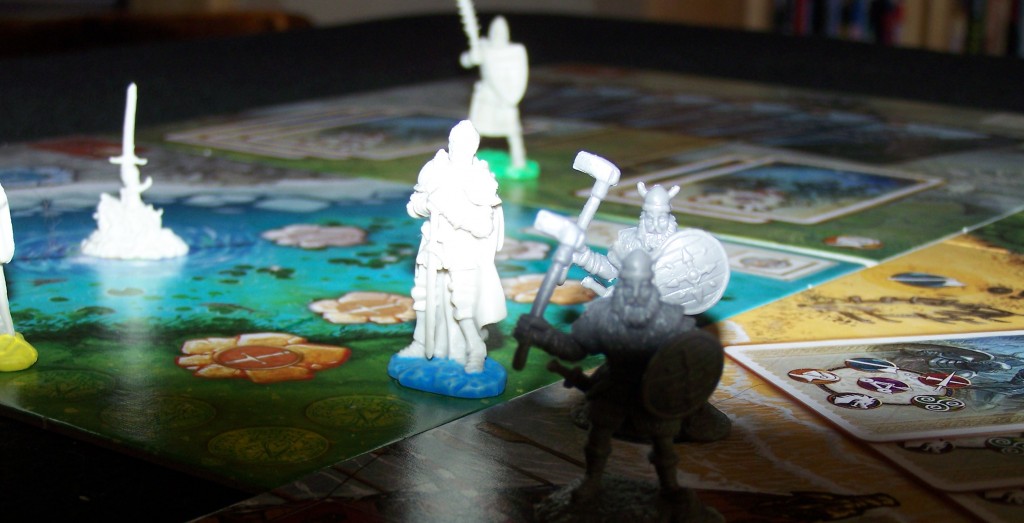 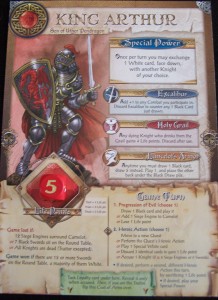 This is a great place to start with anyone interested in co-op games or traitor games, the basic mechanics of all the quest’s are really just set collecting and making poker hands, so its easy to explain and get people playing. Whilst there is a lot options and initially it can appear a bit daunting after a round of turns everyone should grasp whats happening. For something to slap on the table and get going pretty quickly this is it and once set up it looks stunning. Sort of like the board game equivalent of a MILF or is that a Cougar.

I’ll tell you another mechanic that this introduced that I don’t think I’ve seen in any other games is the option for somebody to just sit down and join in. Even if the game is underway and there is a space you can just deal them in and off you go, how cool is that.

The only bad mark I’m going to throw at this is its rule books, yes there are two of them. This frankly seems a bit overkill, they look lovely but splitting the quests into a second book is a bit strange especially when some rules are in one and not in the other, however its not a deal breaker and once you get a hang on whats happening you won’t even need them again, here’s a tip though, make sure you explain the traitors rules very well, because it can be a bit of a giveaway if somebody suddenly needs to study the rules mid game.

So this being a co-op obviously its you against the game, and boy this thing is as evil as anything that has come along since, then you throw in the possibility of a traitor and it really goes off the rails. So you all need to be working together and the game cleverly with a few very simple rules does its best to make you all look like your the bad guy. Take for example the Black Knight quest, if you draw a bad card for this quest it has to be played down on the board for the BK but the player has the option of putting it face down to gain a white card. This offers up such a tasty quandary if the player is good then they gain the card which is really useful, and now here is a thing, you can’t say what the exact power of these or any cards are. You would state something like “Tis a a puny naive that I have placed down” i.e. a power 1 card, which of course doing this also helps the traitor disguise his actions because he can be lying through his teeth whilst putting down nasty cards or stockpiling other good cards in his hand. Pretty soon the most innocuous move can have all eyes on the table scowling at you. 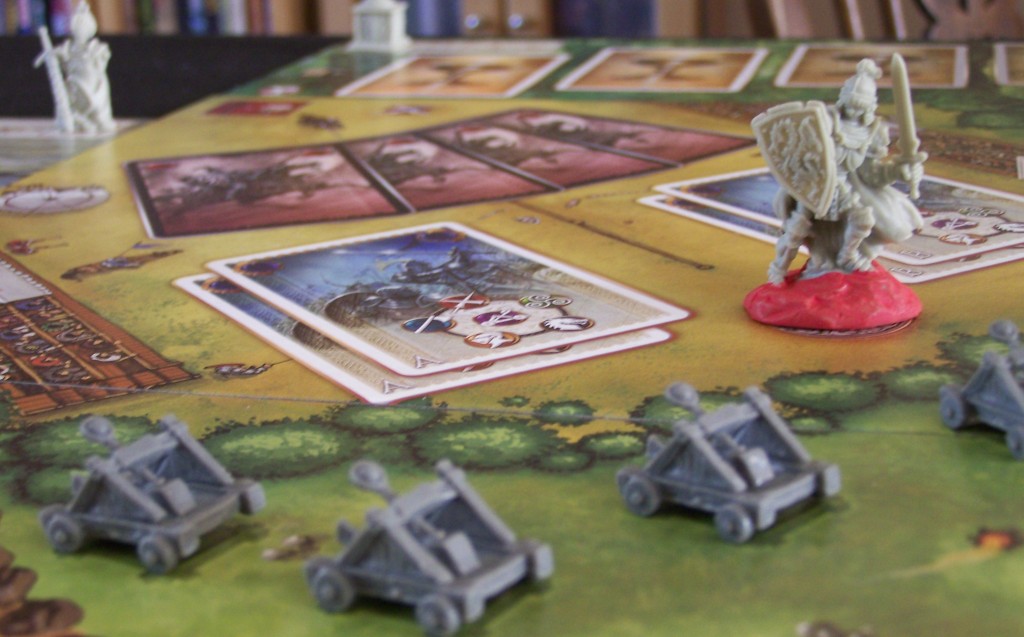 You can out a traitor if you so wish, there are a few rules. There needs to be at least 6 siege engines down and 6 swords, and this is a one time deal so you want to be sure. Because if your wrong than a white sword switches to black, of course there is nothing stopping the traitor from accusing fellow knights as well. Once the evil traitor is discovered than he can cause all sorts of mayhem by taking cards from players and placing siege engines or playing black cards from the deck.

So losing well that is achieved a few ways, if the siege engines fill up to twelve than you’ve had it, if there are more black swords around the table at the end then you’ve lost, and if everyone dies you lose. The win condition is simple put down all twelve swords you need to have more shiny white swords around the table than black otherwise that mean old traitor wins. The swords are placed upon completing or failing quests and some quests also come with extra perks that can help you along the way such as the Grail or Excalibur.

So summing up, this is a lot of fun but damn its hard. As an introduction to some now much used mechanics alone its worth a grab, as I’ve already said you are getting a handsome game with some neat components. I’ve not even covered all the quests or the fact that some of the quest boards are reversible adding even more carnage to the game. There are deeper and more thematic versions of this style of game out there now, but this old lady still has some tricks up her sleeve. And if you throw on Monty Python in the back ground than this can turn into a riot, I can’t play the game these days without thinking about the stupidity of the film, maybe that’s what we need a Holy Grail licensed re-theme?

So for me and the gang we’re off to Camelot!