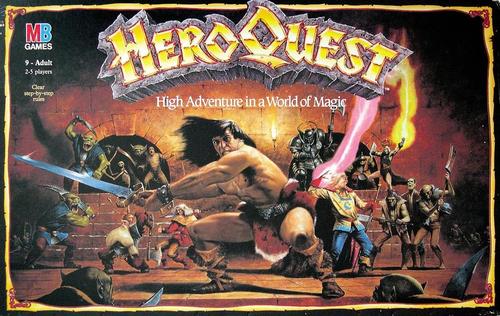 Still a solid game, really tough to track down these days. If you can nab it at the right price its a great entry level dungeon crawl. Still as good as you remember.

Ah the 80’s that bygone age of big hair, bigger shoulder pads and florescent clothing. 1989 was a standout year giving us some great movies Lethal Weapon 2, Burton’s Batman and Back to the future 2 some pretty cool tunes, Nirvana’s Bleach, The Stone Roses all of them classics, it also gave us the board game equivalent of these much loved treasures Heroquest.

Milton Bradley teamed up with Games Workshop to give us the cardboard equivalent of lightning in a bottle the first true dungeon crawl boardgame Heroquest. As a kid me and my friends must have played this thing to death. As soon as you opened that box you knew you were in for a treat. It came with a wealth of so cool components, actual bits of furniture to adorn your dungeons, heaps of miniatures, spells, armor and treasure oh my, and a book chock full of quests.

I remember devouring this game, it filled the gap for me and my buddies giving us that great D&D RPG experience but with loads of really cool stuff to play with and a cleverly designed board that allowed for an infinite amount of possibility’s. Nostalgia is a great thing but sometimes those rose tinted glasses when removed can lead to terrible frights. Would this still be High Adventure In A World Of Magic.

So it was with some trepidation that I opened this once sacred item to try it out again now 30 years later, as an experiment and to skew my now cynical and aged disposition I recruited some youthful adventures to join my on my quest, my 11 and 8 year old and a couple of their friends. I got to be the DM I set up the first quest and we gave it a roll. 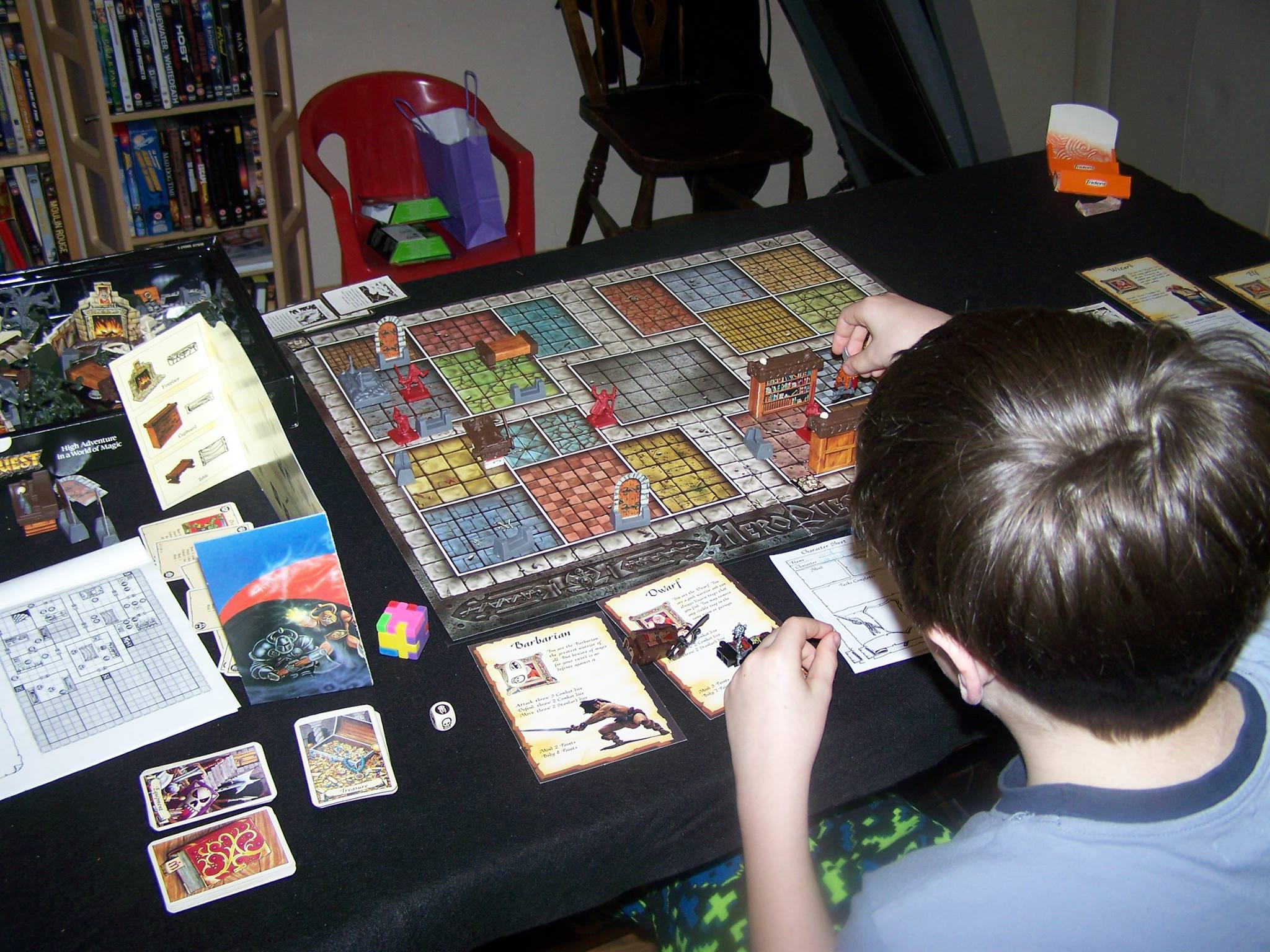 Here’s the first shocker you may have forgotten, but Heroquest is a Roll & Move! really! The rules are so simple you roll your two dice and move that many spaces opening doors willy nilly the only ruling that you cant move back onto a space you’ve already passed. You also get a couple of actions, you can fight by rolling the tiny little custom dice, roll a skull you hit something, need to defend you need to roll shields to offset any attack. You an search for secret rooms/traps dependent on quest (i remember searching a lot for traps and secrets excitedly and never finding much) or treasure which is decided upon by a random card from a deck. And the Wizard and Elf can cast spells by playing a card from their magic deck, mostly involving killing something.

But you know what, once this was set up and going I didn’t care, and the kids they loved it. The cool thing was always the exploration, as you opened doors and moved about the board evolved with new doors appearing or monsters,, that excitement still holds my audience was lapping it up. I used years of proper grown up RPG experience to help build the atmosphere throwing in sound effects and maniacal laughs for the villains and my little band of adventurers where living it, forget your games consoles they were eating this up. 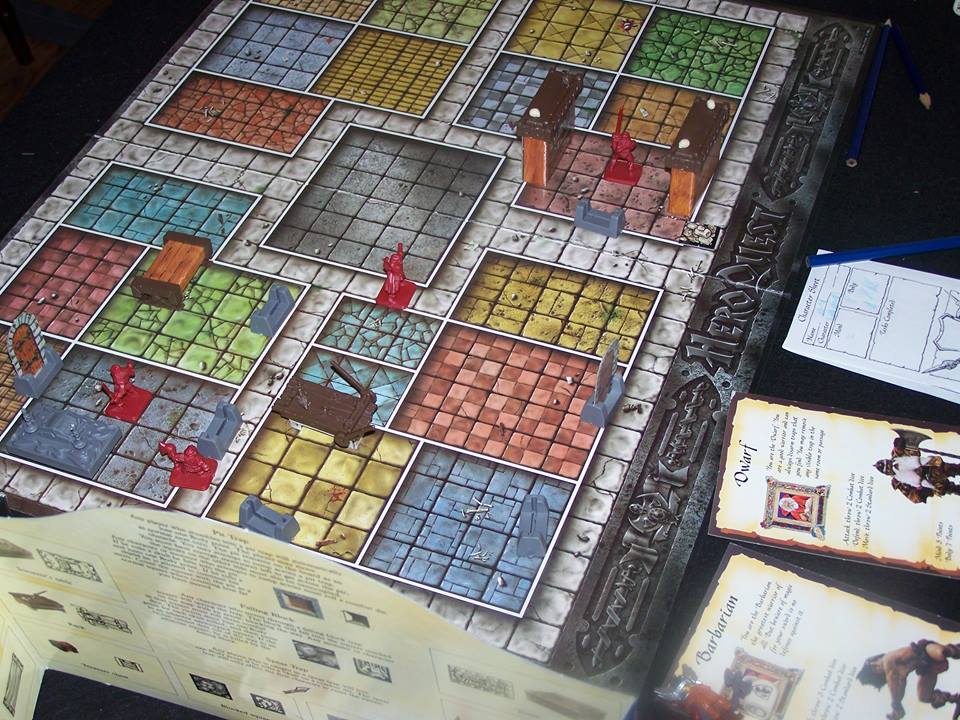 It is all very simplistic, pretty much all the dungeon dwellers have 1 health so a solid swipe from a character will pretty much wipe out most of them, but the kids didn’t care and neither did I. It took a while to get them to work cohesively as a team my youngest was loot whoring like a Warcraft newb on their first raid, racing around throwing caution to the wind opening door after door spilling untold hoards of Goblins and Orks onto the party in that search for an elusive treasure chest.

Just sitting back and watching their joy and squabbles as they battled the hoards was hilarious, especially when George (the 8 year old treasure obsessed Elf) used his walk through walls spell to abandon the party that he’d gotten outnumbered by the evil denizens in his quest for shiny trinkets, and step through into the main baddies Lair seeing their delight that he was going to get his comeuppance, only for him to one shot the boss. Brilliant.

We’ve played this all week and yep its light, and incredibly overbalanced in favor of the heroes, by the third adventure they had bought a bunch of equipment pretty much making them unstoppable killing machines, but you know what they didn’t notice and I didn’t care, we were having a hoot.

Games Workshop tried this again with Advanced Heroquest but they broke the game trying to bolt on the more traditional RPG ruleset of line of sight and abilities and a ton of stuff that just slowed it to a trudge. I have it and maybe after they have grown tired of this, we might give it a go. But I’m tempted to move them up to Descent or Mice & Mystics because I think those will blow their fragile little minds. 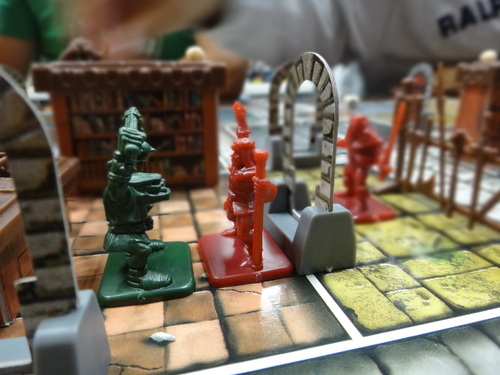 So yes by today’s standards its over simplistic, completely unbalanced in favor of the heroes, a roll and move. But it has all those mini’s and bookcases and doors, its a hoot to play both sides of the table. If you have kids then yep I think this is the best way to enjoy this game to really get that feel we would have in those balmy oldie times of our youth.

As a game its been surpassed by its more sophisticated brethren and in no way would be worth you investing the serious coin this gets in the second hand market, but I enjoyed my jaunt through these familiar old corridors and if its encouraged my kids to try out something it bit more challenging then thank you Heroquest my old Pal, your still fighting the good fight.