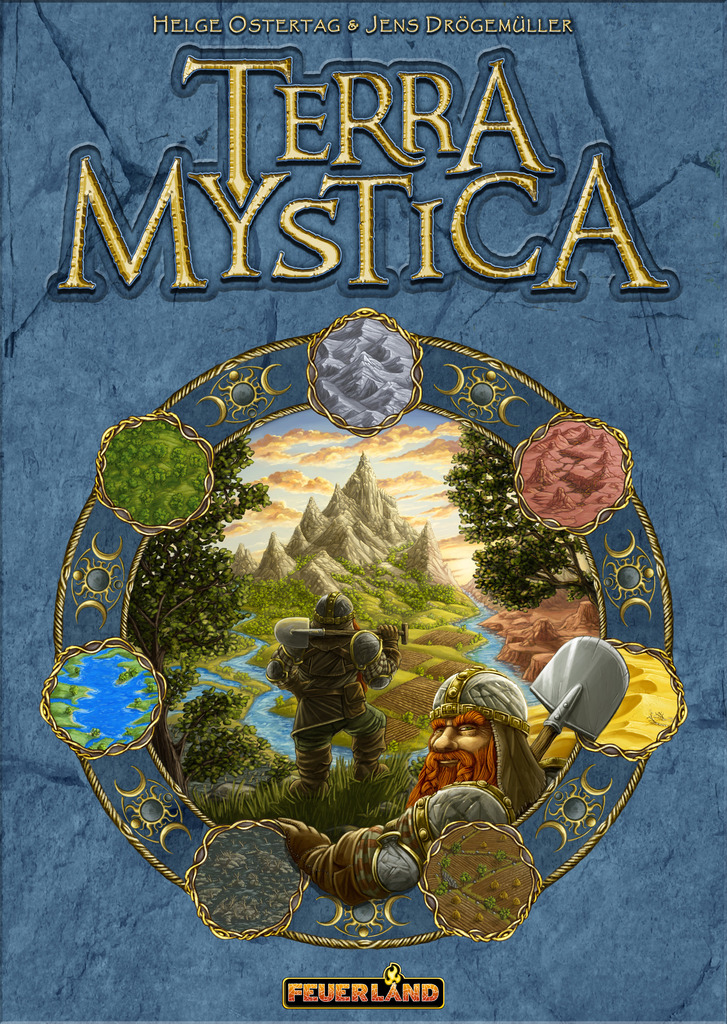 This ones a wooden monster, an amazing game full of as many ideas as wood. If you are looking for a heavy Euro to add to your collection than this box is for you. Destined to be a recurring classic.

Terra Mystica thudded (and I mean that literally, have you lifted this box!) onto the scene late in 2012, it’s a box heaving with wooden components and at first glance once set up sprawled across a table is sufficient to send some gamer’s running to the hills screaming.

I first encountered Terra Mystica last year when I was introduced to the game at my local club, and it was with some hesitation that I sat down to tackle this beast, myself feeling a tad inadequate in its company. I was fortunate to have a good teacher (thank you Graham) who managed to sum up the rules and get us playing in relatively short time and without me developing a brain tumor or him punching me during the process. 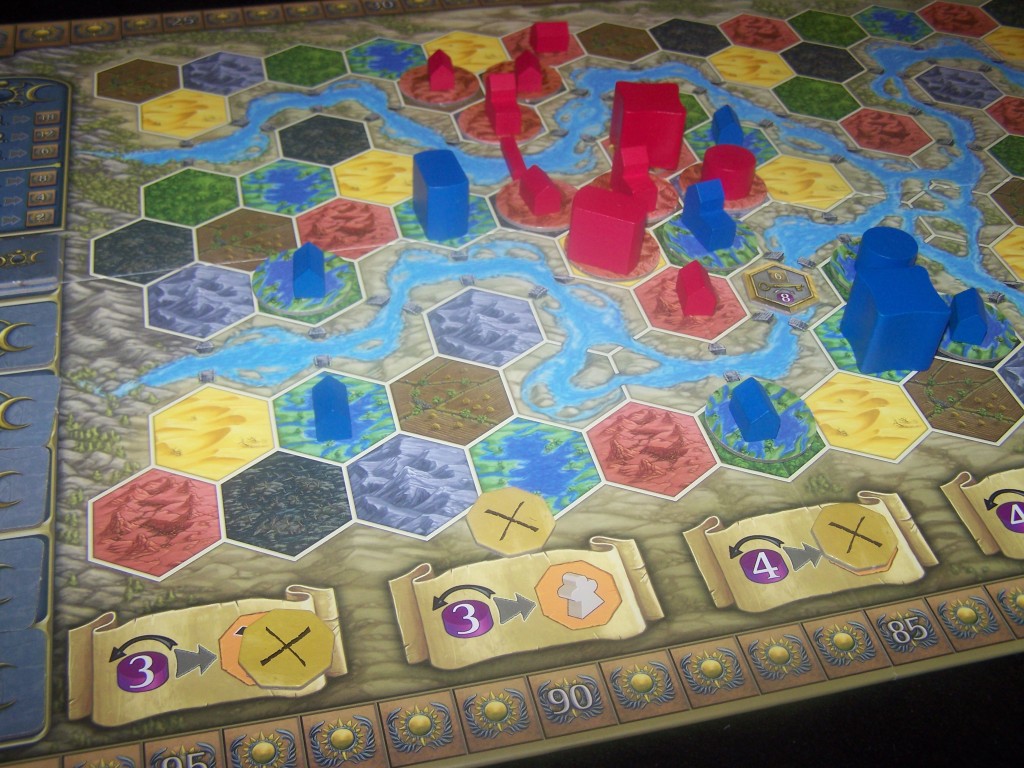 And pretty soon I found out a couple of things about this game, despite its imposing table presence with its heaps of strange shaped wood and bundles of counters and chits, its actually a very intuitive and nuanced game and a great deal of fun to play. But I suppose you’d like something a little more detailed than that, OK then deep breath and here we go.

The games theme has you adopting the role of one of 14 different fantasy races each with their own unique traits and abilities, yep this is a Euro but with a fantasy theme. Its received some flack since release accused of the theme being pasted on, now granted it is more a thinly applied lacquer rather than the great big splosh you see on most Ameritrash games, but it still adds a pleasant aroma of pine to the proceedings (or maybe that’s all the wood) and thematically works alongside some of the more exotic mechanisms ticking away under the hood. So what are you actually doing in this, well the main goal (this being a Euro and all) is to amass the most points by the game end, you achieve this by building settlements over a very colorful hex covered board. Each of the hexes are a type of landmass from forests and deserts to mountains, and depending on your chosen race only one of these will make you feel suitably cozy enough to be able to put down roots. You do this by terraforming map tiles to the color you need and plonking your buildings on them. And that’s pretty much it, everyone is doing the same thing, obviously there are other more subtle goings on, with your opponents proximity giving you bonuses as well as he, and numerous careful choices of what modifiers to apply and at what times to utilize them.

Now I’m not going to run through the rules for this because I can’t without this review going on forever and in the process boring you to death, and me having a seizure, but what I will do is focus on some of the shiny bits that make this game so great. 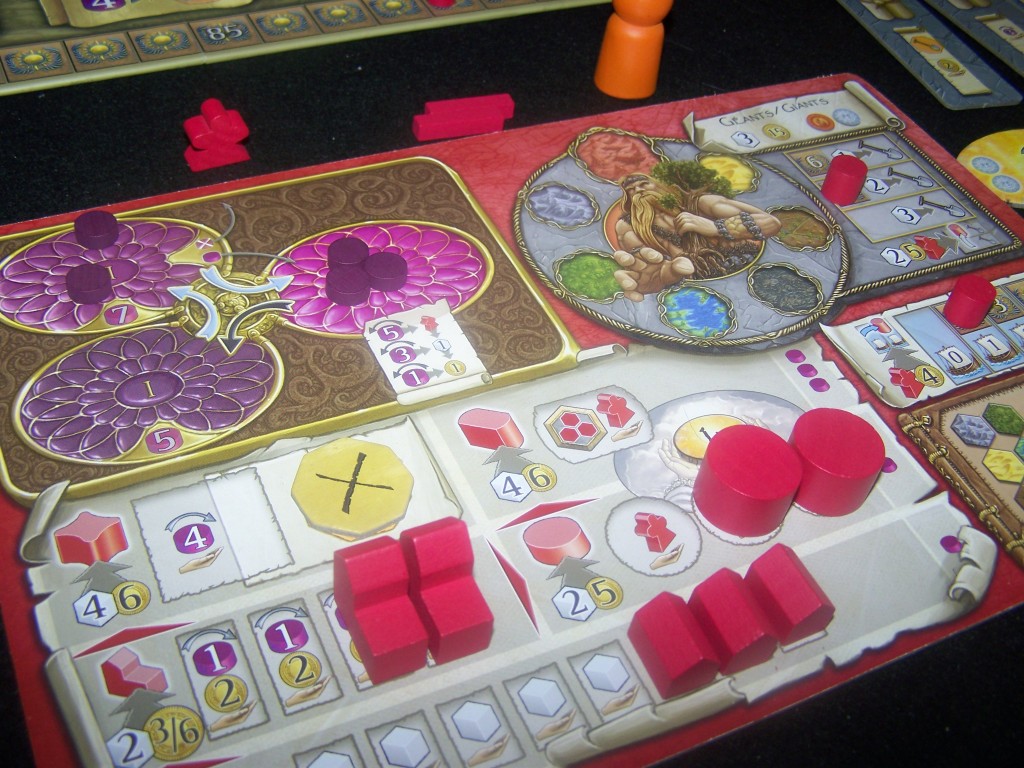 First has to be the amazingly designed player boards, these are just the cleverest things and once you’ve got one set up and ready to go in front of you its like a selection box of gaming possibilities just urging you to dig in. Brilliant design happening here as they function both as player aide and resource tracker whilst sat in front of you like some TV dinner tray, goading you to pluck at the tasty morsels uncovering more and more cool stuff hidden beneath them. Its just such a well conceived idea I’m surprised I’ve not encountered it before, so yes the player boards brilliant.

The other cool mechanism is the mysterious bowls of power.  In the top right of your board are representations of 3 mystic bowls that you have to cycle your magical purple power stuff to enable you to use cool bonus abilities. Its a sort of currency that you have to filter through this bizarre one player aide three cups thingy to be able to use, it sounds barmy and quite possibly is, but also becomes rather addictive. Your mystical bowls of purple power are often activated by an adjacent neighbor building something and you leach off them and jiggle your power about to produce a usable energy at the end of the process. But it is finite as once used it goes back into the first bowl and you need to filter it through the whole mysterious system to use it again. There is the option to BURN!! your power which accelerates the process and gets the polished purple power into your mits, but in so doing you burn up one power for each you bring through, its a tactic to be used sparingly, or you could find yourself coming up short when you most need it. 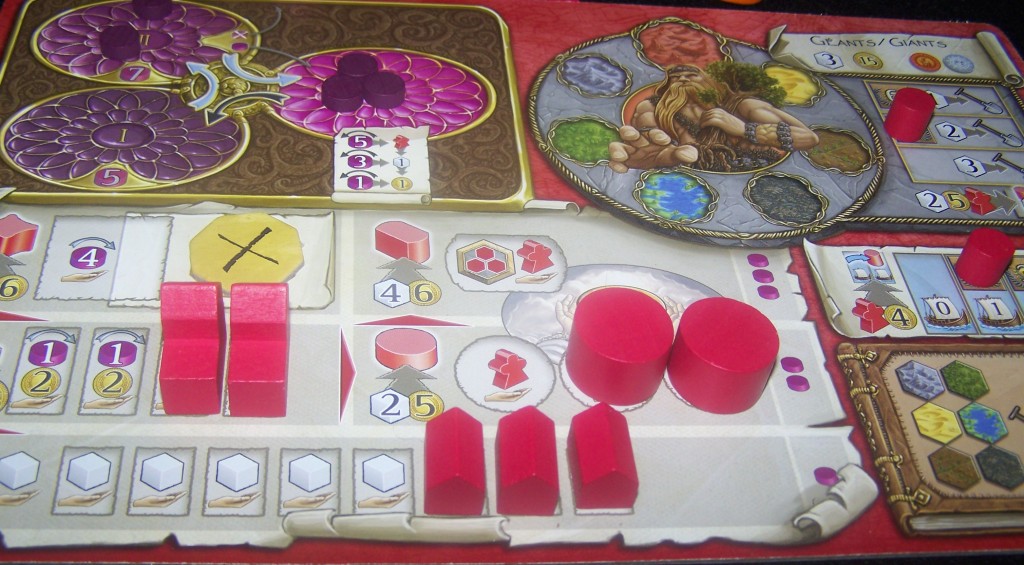 And that brings us back to the main game, because essentially this is what you are doing a great deal of the time through out your strange tree hugging journey that makes up a round of Terra Mystica. You build an engine to produce a resources that you need and then spending those changes your original engine, which means you then get different stuff and then try and get smart only to… where was I?  Ah yes, every forward step has repercussions, everything you take off will mean another piece returning to your board covering up areas and limiting your income on the next round. It really makes much more sense when you are doing it.

Besides all of this crazy resource gathering and magic bowl rubbing, there are also bonuses that pay out for doing specific things during a turn like building a specific building or are dished out once everyone has finished doing their thing each round. These offer further options that you really need to be planning for from the start to guarantee you make the most of them. You also get the option of picking a start of turn perk each round that will offer either instant gratification or points bonuses. And these bonuses become more and more important as the game progresses, with the option to pass on your turn for a pick of whats available before the others. Which has resulted in a couple of games where everyone is waiting for everybody else to pass and return their chits, leading to a scrabble of meeples and harsh words as everyone snatches for the one they need.

And then there’s  the cult track, which see’s you sending off your colonies priests to some jimmy jones style cult to worship, nature stuff. Do well on this and your little fanatics will reward you with more bowl rubbing powers and can amass a huge points payout at the end. 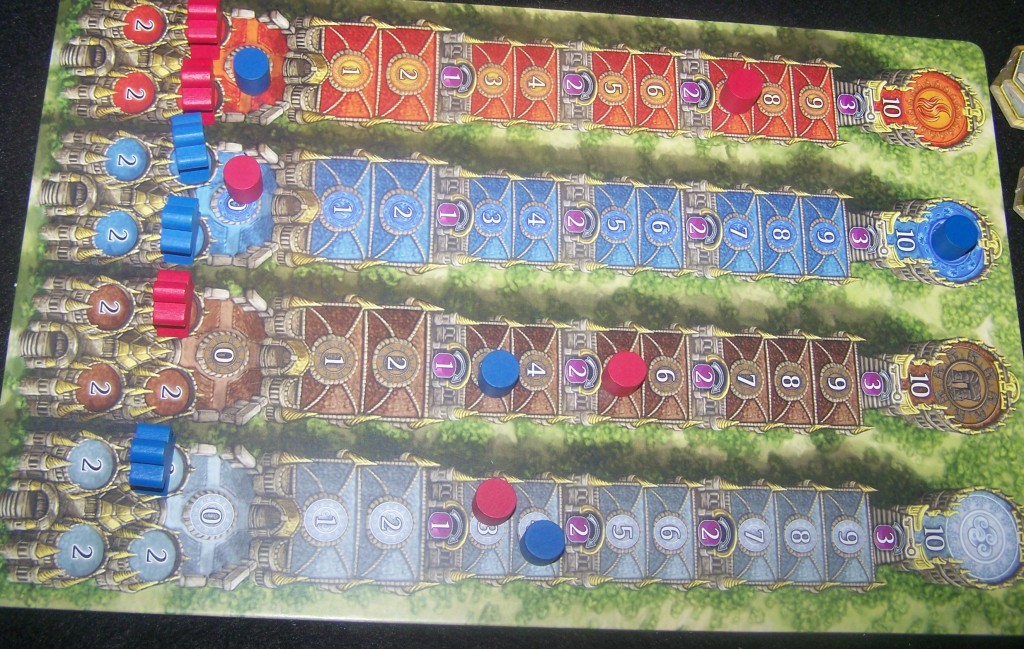 I’ve really only touched upon the surface here, and to be honest no written review is ever going to do this one justice its something you need to experience really to get whats going on. If I had to pigeon hole it I’d call this the experienced gamer’s Catan, its probably as close as I could get to an elevator pitch and even that really doesn’t do it justice.

Now its not all fun, fun, fun. Despite the games best attempts and the sleek and very well put together rules this one still has a pretty steep learning curve, anyone attempting this for the first time needs to have had some experience of modern board gaming and a good tutor. And for gods sake if you are going to teach people make sure you’ve read the rules at least four times and played it through a couple more, because a shoddy set up on  this one and nobody is going to thank you, which would be a shame because this is a game where its subtle tactics only really start to emerge on subsequent plays.

And on those following plays It all starts to become clear, well only its doesn’t. What is clear is Its very easy to make some poor decisions in the early turns that can see you struggling to recover from, you need to start your resource engine carefully to build toward that end game goal, and an early misstep will mean failure. And as each of the races have subtly different powers you can’t play them all the same way. After having a couple of successful games using the Witches I’d taken on the Giants and confident of my amazing world building skills subsequently managed to bankrupt my economy within two turns which resulted in me never really having a chance to catch up. And nobody wants an angry giant.

With more players it is easier to salvage your game but in 2 or 3 player games poor placement of your starting locations and burning valuable resources transforming stubborn terrain can really bog you down. When I started to write this review I found I kept recalling more and more rules and deeper strategies as I cast my mind back, you certainly get a lot of value in here and it will reward you coming back for more and with the mixture of races it will be a while before you’ve exhausted what this offers. 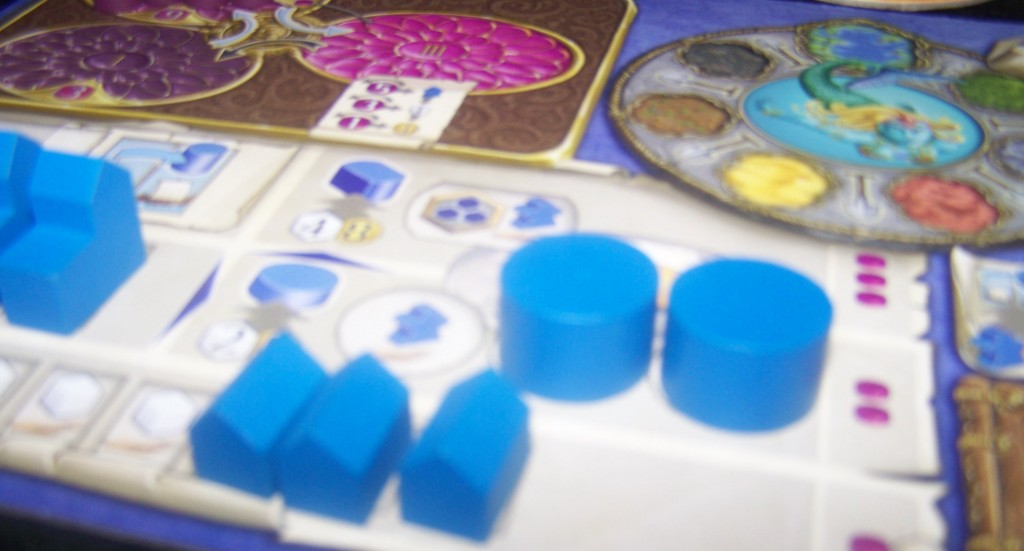 And regarding any AP heavy players out there, yes those prone to it will encounter brain seizing moments, and repeated plays can add to this, as its then you start try to plan ahead. So be warned as to who you play this with or bring a book, or a stick.

So who is this for? I have to say Euro players are going to get the most from this, despite the designers attempts to apply a story to proceedings that all takes a backseat to the mechanisms and is more a flavor than a selling point, but then that never hurt Lords of Waterdeep or its sales. If you are looking for a war game then think again, this is more passive aggressive with no actual direct conflict. I’m not the worlds biggest euro fan and often find the dry mathematics and math heavy play styles a turn off, but this is nicely balanced and it draws you in with its Witches and Gnomes and somewhere during the game does a subtle shift into the full Euro, it offers rewards for anyone coming back for more with a fiendish array of options. And it has mystical bowls and purple magic power stuff.

So I recommend this its a solid game and for me it fills that mid to heavy Euro gap in my collection and with its theme will guarantee it hitting the table with my group. I’d strongly suggest a try before you buy where possible because it is going to have that love it or hate it thing going on. Personally I love it.

Fresco Big Box
Be the first to comment!
Leave a reply »