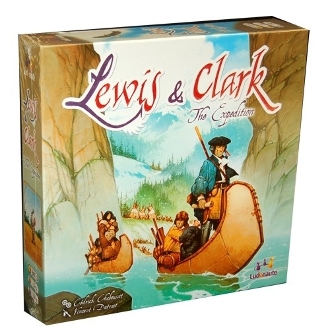 This is heck of a game, there is so much going on in this design and many many ways of playing. It looks amazing, one of my stand outs from 2013.

Let’s go paddling downriver in our canoes, fortunately, this involves very little duelling banjos and thankfully no pig squealing. We’re going way back to the expedition of 1804 that saw Meriwether Lewis and William Clark exploring the newly acquired Louisiana Territory.

Lewis and Clark is a frothy milkshake of deck builder, worker placement and breakneck race upstream with each player assuming the role of an expedition leader trying to reach the Pacific before their rivals.

Once you get to grips with the game’s iconography you’ll find it simple to grasp, the complexity which unexpectedly hits you in the face like a lump hammer about two rounds in comes not from the rules, but the myriad choices you are faced with as the game escalates. The repercussions of making a poor choice will hound you like a Baskerville pup. 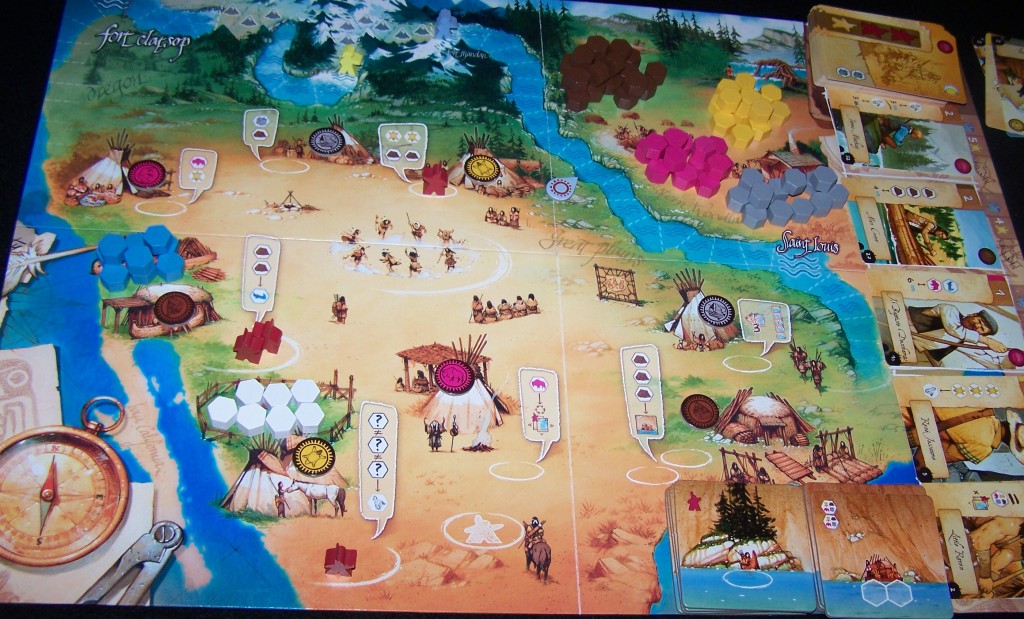 The action takes place on a handsomely illustrated board, all the art in this game is top notch, Vincent Dutrait has a style that evokes a comic book feel all of the cards in the deck are individually illustrated and each is work of art dripping with character.

So the game. Every turn you have to perform a compulsory action. That will either be playing a card from your hand or an Indian onto the game board. 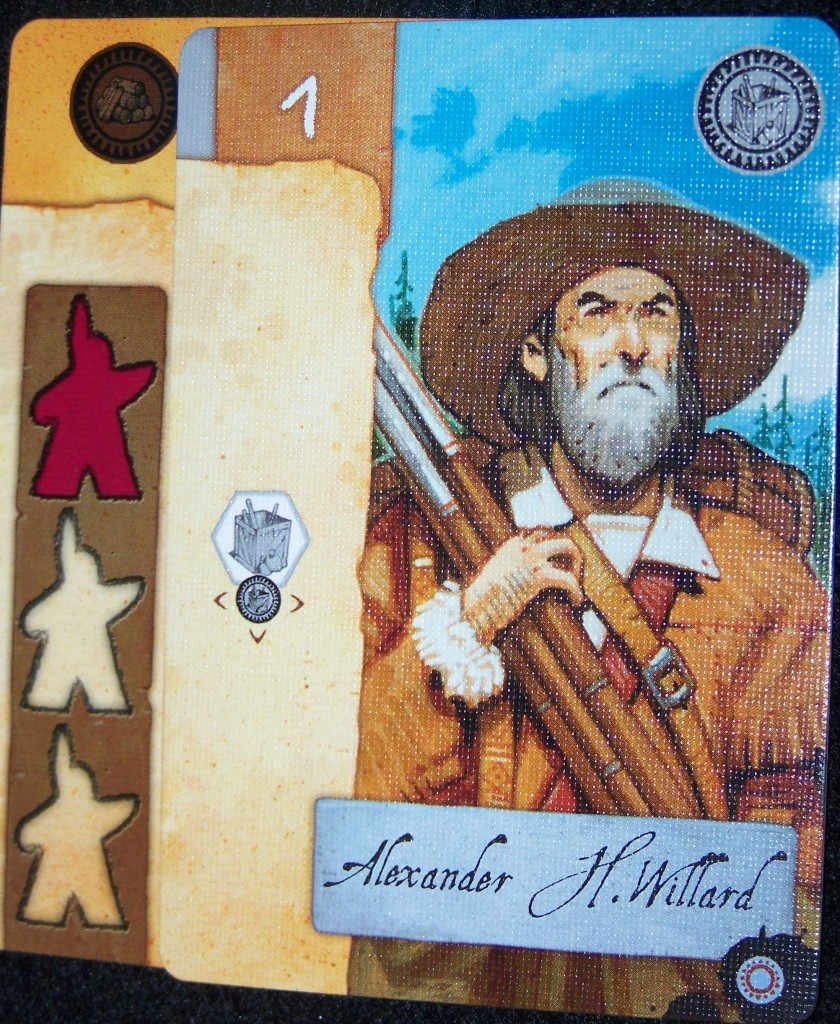 Everyone starts with the same basic deck allowing different actions, be it gathering resources or moving along the river. You play cards in pairs one as the action your performing and the other is flipped, on its reverse is a strength (how many times you can repeat that cards action).

What you use when is when the brain burn happens because if you use the reverse strength of a card early in your turn you won’t have its action available later. You can also use Indians in your party to play on these cards to increase the strength but like your cards, these are in limited supply. 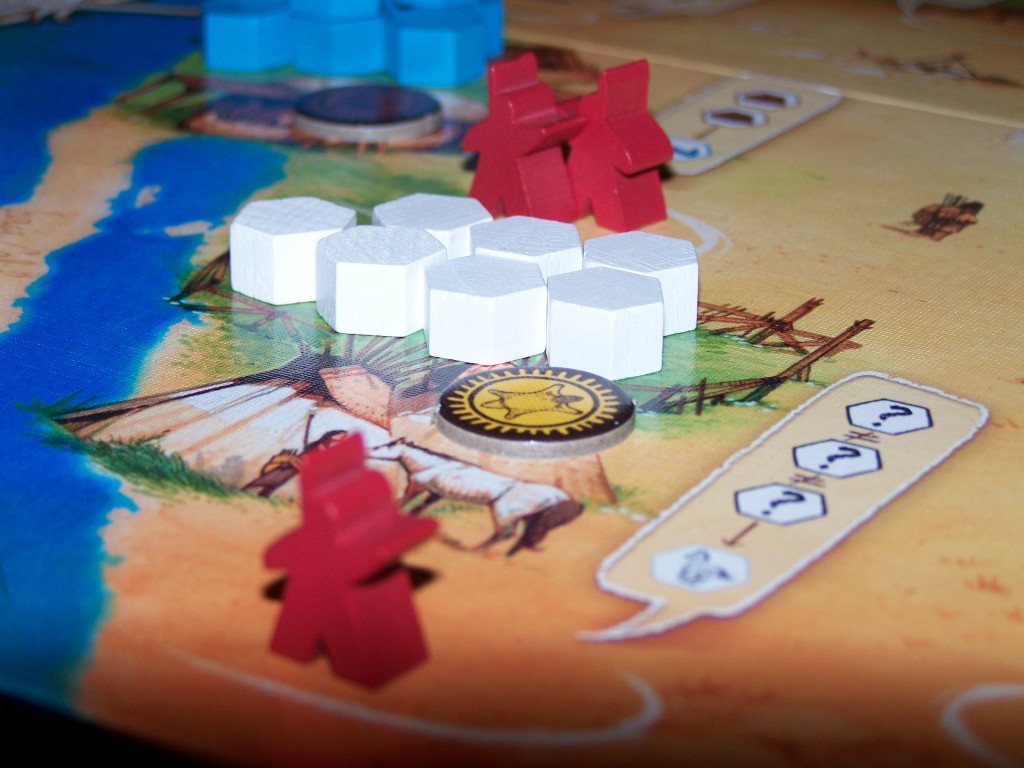 Playing one of your Indian’s onto the board will use the actions available, like most worker placements the spaces are limited and the only way to retrieve them back is by using a card in the starter deck. Again these are mainly about gathering more resources. But you can also build more boats to add to your little convoy or convert other resources into canoes and horses the fuel as it were to progress along the route. 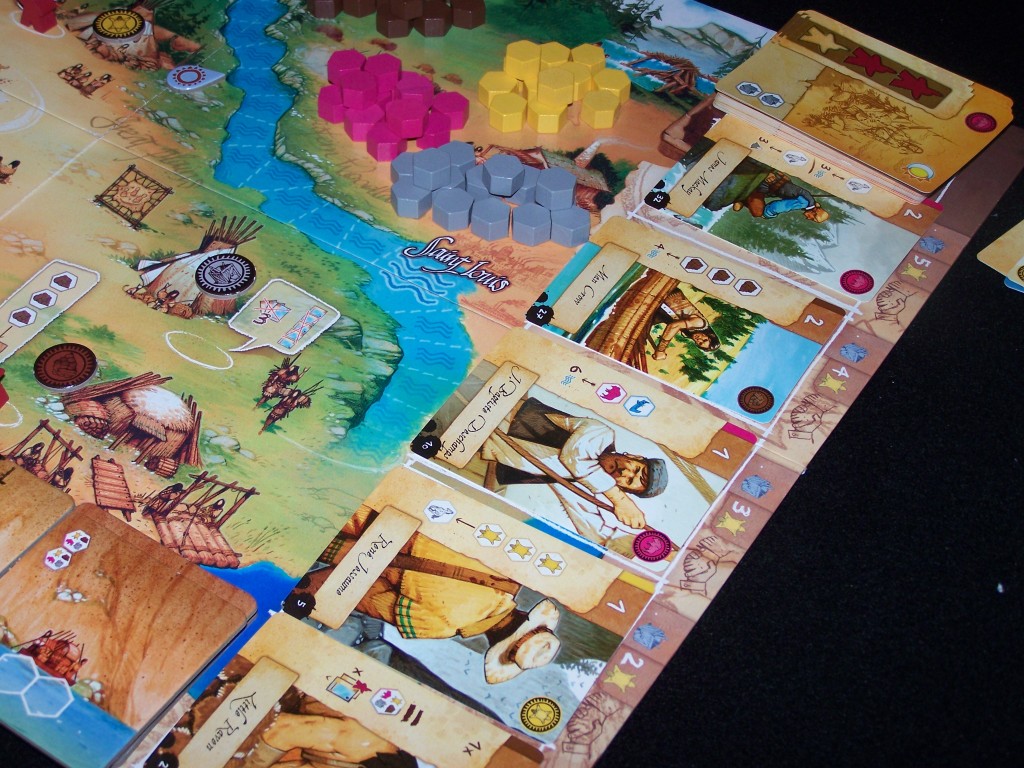 You also get a couple of optional actions. There is Recruitment that will allow you to buy new cards to add to your deck, these spill out along the side of the board and have descending values of resources and move along as they are picked up or discarded. Many add some very powerful options or multiple choices and one tactic can be to slowly discard the weaker starting cards for these power cards, most also come with greater strengths doubling there usefulness. 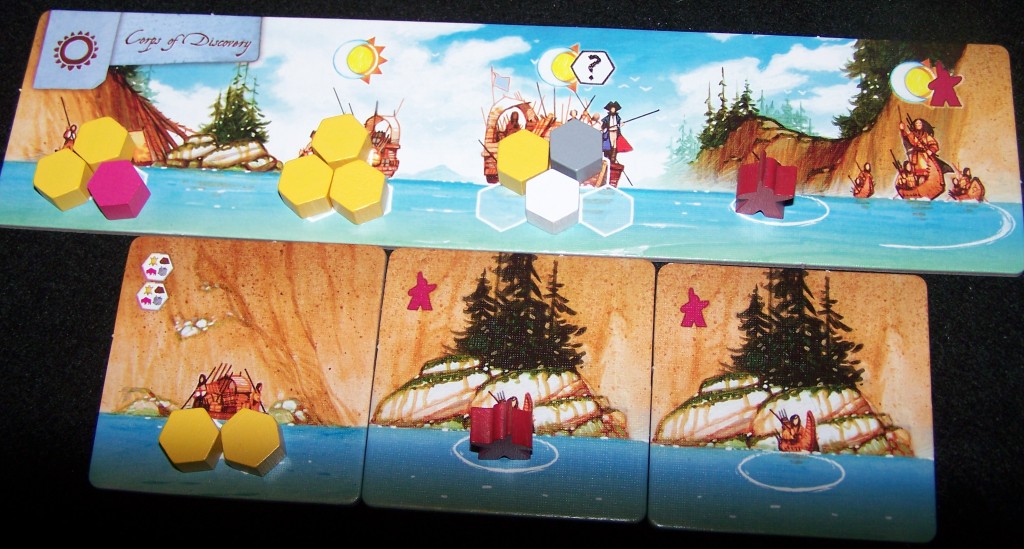 The final choice you have is to set a camp, allowing you to pick up all the cards you’ve played. However, there is a penalty to this.
Some of your boats have a sunshine symbol and any resources piled in these will cause delays, combined with any cards you have left in your hand.
This number is how far you drift back along the river, it can result in a hilarious situation where a player will go thundering upriver only to drift back through poor planning. wherever you come to rest your camp comes up to meet you.

And you can’t just race ahead ignoring the camp because you need to get it to the finish to win.

And that is pretty much all of the rules, I’ve skipped some of the finer details but at least that should give you the basics.

This isn’t a short game with 4 it’s a good 3 hours, the original expedition took over two years to complete so a couple of hours isn’t a bad trade-off.

As you near the end of your journey there are mountains to cross and this also tips the apple-cart up and then stomps all over them. If you’ve constructed a sleek engine to whiz you up the river you suddenly have to change gear to a completely different resource. Thematically it works a treat slowing everyone down as a range of mountains would, Its also neat catch up mechanic because it will slow down even a runaway leader. 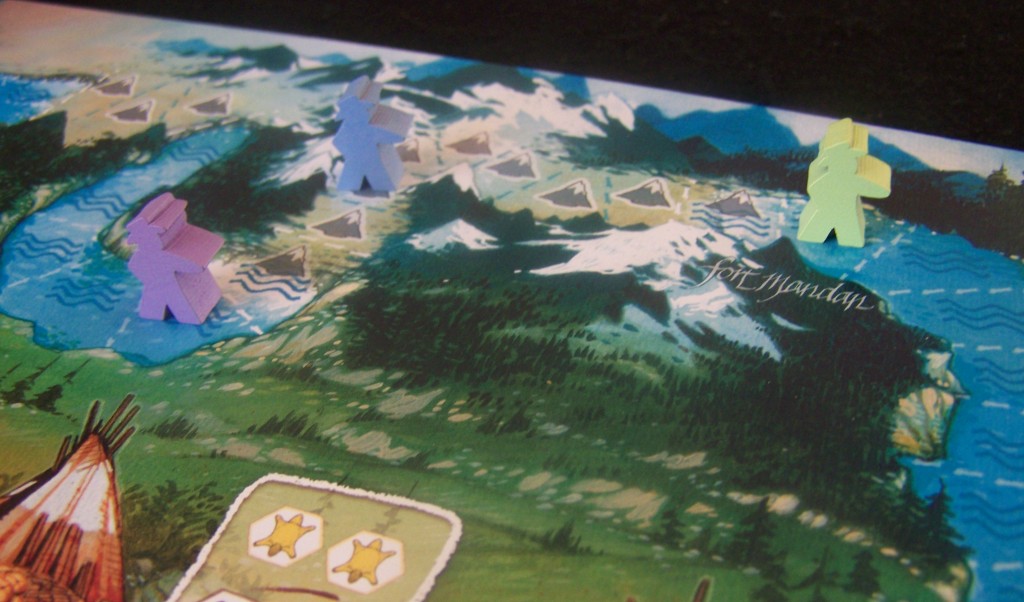 Taken as a piece of historic gaming its applied a dubious Hollywood veneer to history, the Indians are all playing nicely and everyone is one happy family which was far from the case for that time period. It’s in its dizzying mix of resource gathering, engine building and worker placement, that sets this apart and rightfully deserves its place as a modern classic and features many wonderful design choices that have subsequently become industry hotness. Terraforming Mars certainly owes a tip of its cap to a lot of what Lewis & Clark was doing.
And despite the fact there’s a hell of a lot going on, it balances all the disparate elements wonderfully.

It also plays as a solo and this actually works really well and is an equally challenging puzzle as you try to race an automated expedition that methodically moves along the river like some 1800’s clockwork terminator. I strongly advise giving this a go before trying to teach the game to others as all the main mechanics are used.

Sadly as highlighted in a recent blog post from Ignacy Trzewiczek (his boardgames that tell stories) he bemoaned that Lewis & Clark is no longer in print having reached the stately age of 5 years its been surpassed by numerous shiny objects and is now a curio to be pondered by aged board game scholars reflecting on those heady days of 2013.

That’s a shame it is truly a fantastic game and it’s a crime that aside from the be-cobwebbed depths of a board game cafe or some musty collection are the only places this can be found. I do urge you if you have the opportunity to give it a whirl then dive at the chance perhaps we need an organisation like the WWF for boardgames to preserve endangered cardboard species.

Quarriors
Be the first to comment!
Leave a reply »