previous
Root: A Review of Might and Right
random
next
Lewis & Clark
Board Games
WDR Silver
2374 views 0 likes 0 comments 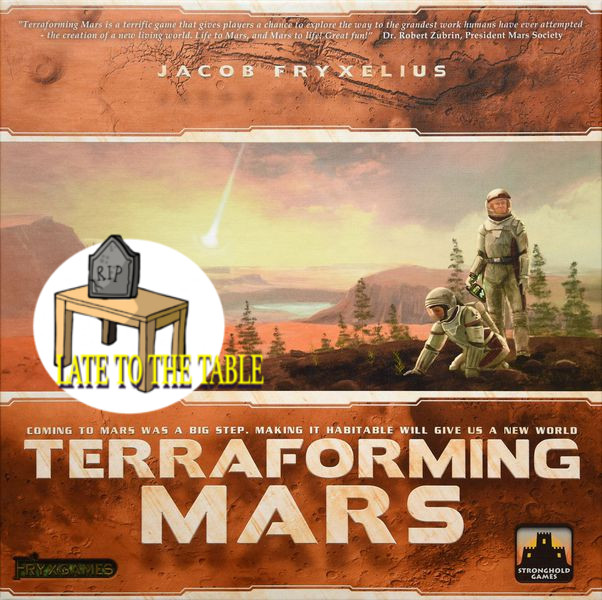 Easy to teach and even a novice can compete with experienced players.
Virtually endless variety and replay-ability.

It's components and rudimentary graphic design are a blemish on what is otherwise a exemplary bit of game design.
It can run long with players determined to procrastinate.

Had this looked as good as it played It would have been peerless as an example of modern game design. It's still a fantastic and infectious way to while away a couple of hours and one I'll certainly return to without hesitation. For a game offering such a variety of strategy and tactics it deserves extra kudos for also being one of the easiest to get to the table and teach. But damn it makes me sad that this isn't prettier.

Welcome to our “Late to the Table” series of reviews. That’s industry code for eventually reviewing a hugely popular game long after every other reviewer, facebook group and pet with an opinion has flogged that particular nag to death.

Anyway, where better to start than a cracking fugly hybrid euro sci-fi from a couple of years ago.

Like Hollywood, the tabletop zeitgeist briefly trends around the same theme. Remember all those Asteroids hitting the earth movies? There was that crap one with Frodo in it and then there’s that cinematic work of idiot-genius from Michael Bay, Armageddon wherein John McClane punches an asteroid. It’s the chicken soup for the soul of disaster movies… But I digress. 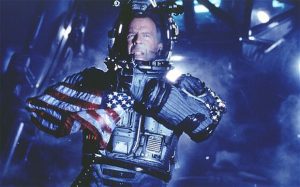 Board games have a history of this we’ve had Vikings, Zombies, Penguins, Chthulu and inevitably Zombie/Penguin hybrids…?

Spurred on by a brief dalliance with the possibilities of life on the Red Planet via Movies and TV a handful of designers were inspired to take a hard science approach to the colonization of the Red Planet. Here are a few of the most notable.

Houston We Have A Problem! 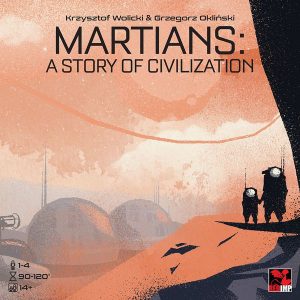 Martians: A Story of Civilization was first to lift off but didn’t stick the landing . It’s spiritually the closest to TM in what it was attempting but suffered from an abundance of Kickstarter bloat and shipped with a rule set that NASA would have struggled to understand. It resulted in it plummeting into obscurity and is something of a beautiful failure that I might seek out one day.

This left the race to the Red Planet open with Terraforming Mars from Stronghold Games and the highly anticipated First Martians from Portal (re-envisioning Robinson Crusoe but on Mars) vying for the top spot. 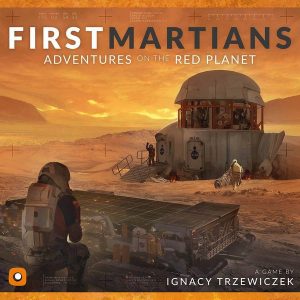 Portals martian expedition suffered a protracted development leading to escalating levels of hype as numerous industry luminaries bestowed ladles of puffery upon it.

Its eventual release replete with a woefully incapable rule book (sigh) and most of Crusoe’s original issues resembled less a bold exploration of a new world and more a suicide mission.

This one hurts more as I was as caught up in the whirlwind of expectation for what should have been something very special. Sadly Portal repeated all the same mistakes and coming from a seasoned publisher is very nearly unforgivable. To this day I’ve never played it and very little I’ve heard of the experience of getting this to the table fills me with any enthusiasm to attempt to.

Which brings us to Strongholds ramshackle launch into the great beyond.

First, let’s deal with the elephant in the airlock. Right now, we are spoiled by immaculately presented games festooned with some of the coolest board game bling there’s ever been. Yet TM feels frustratingly underserved by it’s 80’s aesthetic and those godawful player boards.

Scythe boards on left a fantastic example of design, art and practicality working in unison and on the right the Terraforming Mars boards….hmm

Both TM and Scythe float around the same price point yet they couldn’t be further apart in aesthetics and quality. Of course, you could raise the old style over substance debate but let’s not start that one here I’m trying to avoid pissing off every publishing in one review. The recent reprint of Brass is a great example of what a difference some care and attention being applied to the graphic design can do for a game and its interest.

I’m clearly not alone in this sentiment, just a peek at the cottage industry that has sprung up around the game offering all sorts of homespun bling there’s clearly a demand for that fancy-pants version it’s a shame that fans have to dig deep into their pockets to get it.

Right now I’ve got that out my system lets get on with seeing what makes this one tick and why it endures in many players top slot.

At first glance, TM looks both incredibly complex (especially mid game) and rather dry. Whats made TM the success it’s been (in my opinion) is its ease to teach and combined with the multiple paths to victory, results in it offering a fresh challenge each time it hits the table. In my world replay value is king and this one is about as kingly as you can get.

Players, play as a corporation each with a perk, ability or other bonus that gives some much-needed direction when faced by the confounding array of options that the early stages of the game can throw at you. 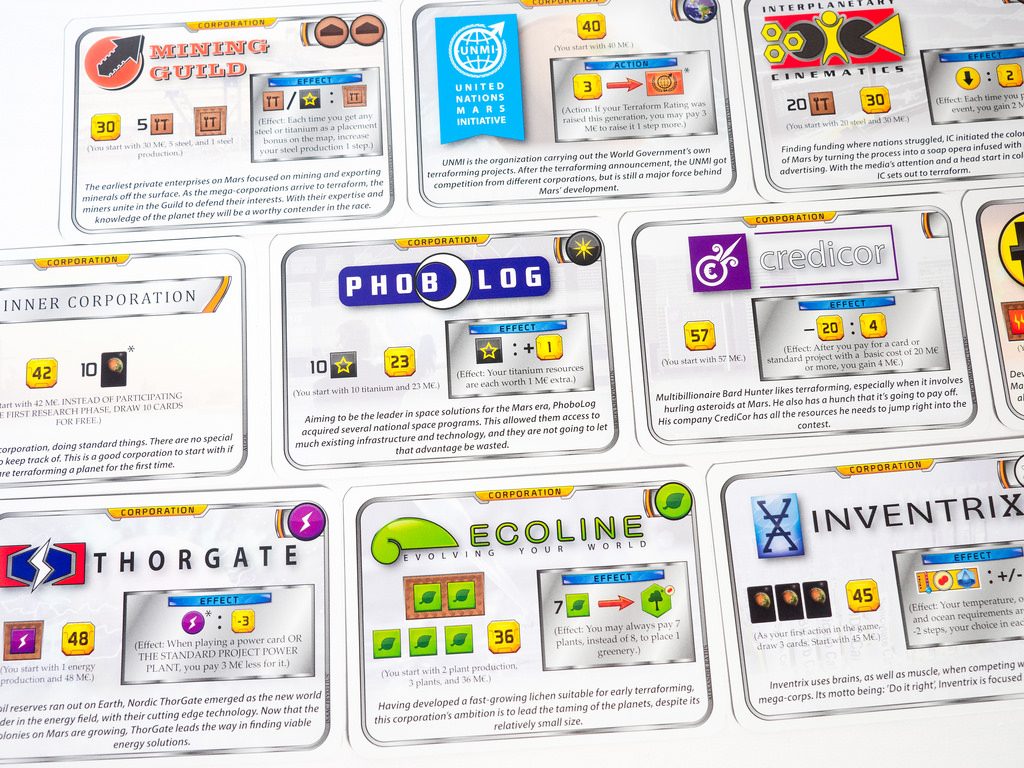 In fact, lets back up a tad. The goal of the game surprise surprise is to Terraform Mars, once the three main requirements are fulfilled Oxygen, Heat and Water the game will end. Cue an abundance of point totting up.
And we’re going to do this by building the most successful engine we can to milk the most points out of the game.
These can concentrate on the aforementioned Terraforming goals which will boost our Terraforming Rating which functions as both our victory point total and income that we generate each turn.
Or they can be any number of other routes using the abundance of cards that we will collect throughout the game.

If you’ve read the Mars trilogy from Kim Stanley Robinson then a lot of this will sound familiar, essentially what your getting is an unofficial board game of that multi-award-winning book series. From the corporations, the turns tracking generations and much of the science and tech that turn up in the game are clearly inspired/borrowed from situations and story points in those books. If you’ve not read them then if you’re inspired to give them a shot there’s much to enjoy or you can go and watch that Matt Damon movie with his potato farm for some less epic homework.

“You’ll Have To Science The Shit Out Of This”

To play it’s simplicity itself on your turn you can complete up to two actions or pass, the round keeps rolling around and around like a spinning top until eventually, all players have tapped out. Whereupon an income stage will generate all the good stuff that your engine is producing rinse and repeat.

What you are going to be doing on your turn is either playing a card, wherein you pay its cost and as long as it meets any requirements it goes into action. Fund an award which will dish out victory points dependent on certain criteria being met, or use one of the standard actions on the board. 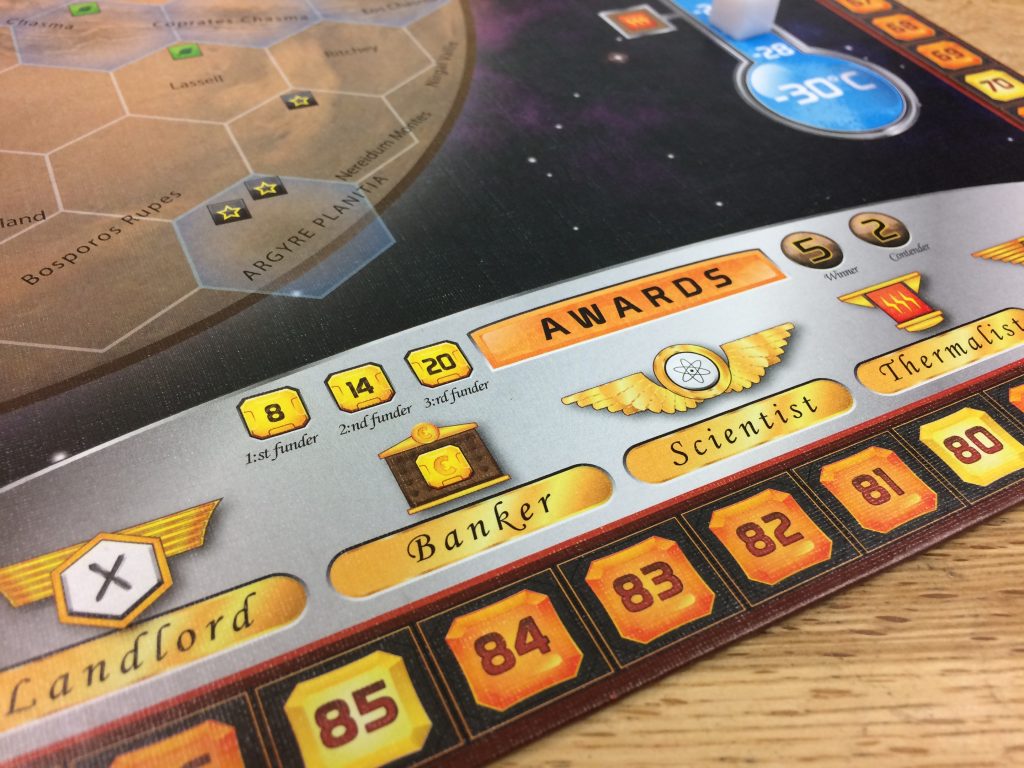 Playing a card can do anything from just give you stuff, or it might boost your production of a specific resource maybe alter one of the global conditions, or even supply you with an additional action to be taken.
Your player board tracks the production of everything such as money, Steel or Titanium resources with the latter two able to be used to discount costs on Building and Space cards.
Finally, Greenery and Heat which can both be converted as an action into either forest’s boosting your TR and raising the oxygen levels or your Heat into increasing the planet’s temperature earning you TR. 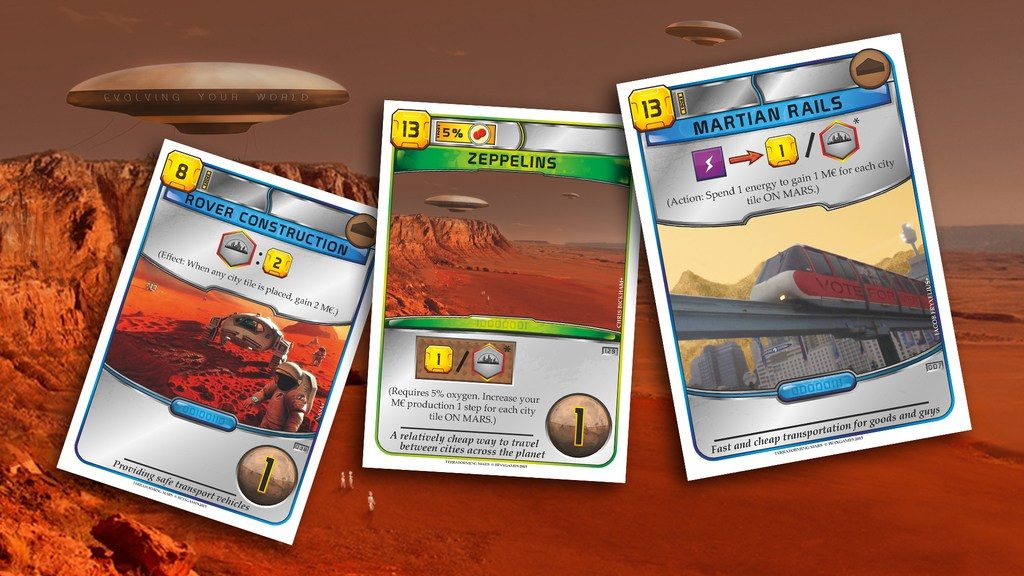 Requirements appearing on some cards are criteria that need to be met before the card can be played such as a specific oxygen level or temperature, some also have an upper ceiling and can as the game enters its late stages become unplayable due to a condition already having been passed. 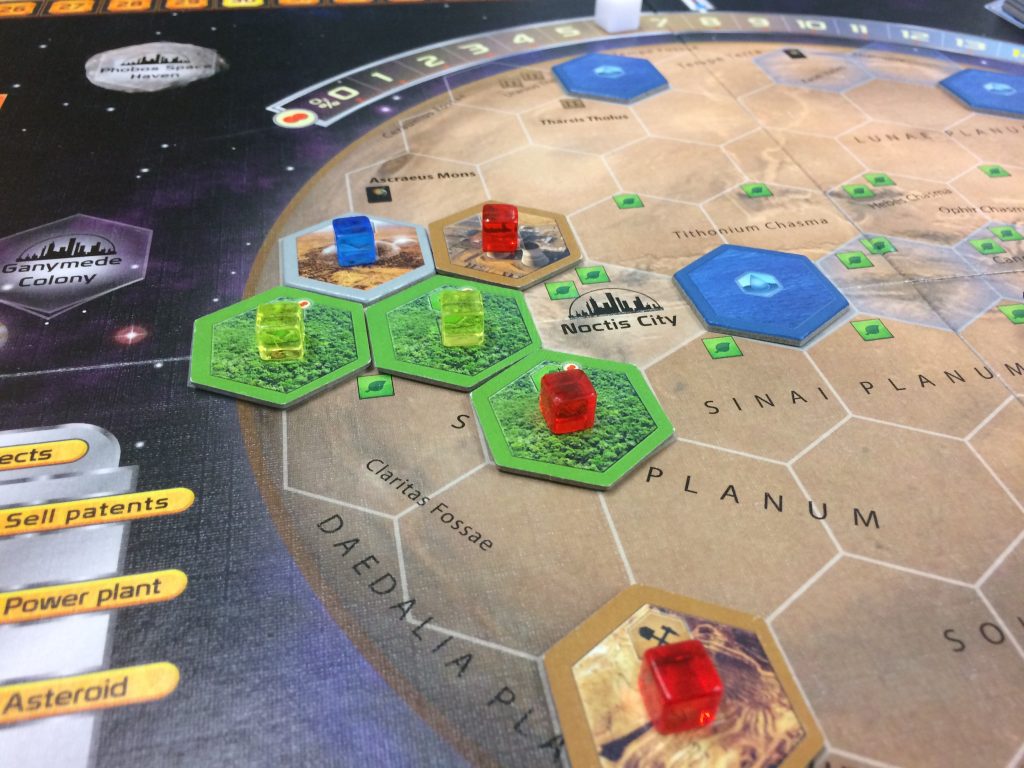 And in truth that’s all, there is to the game. Build the most efficient engine to generate victory points, be that by populating the surface of Mars with lush vegetation, teeming cities or amassing fistfuls of cards worth VP’s or via the multitude of other ways.

Once your underway and drawing fresh cards each round options and combinations whirl into view strategies you’d at first never noticed or seen no value in pursuing now become vital parts of the puzzle that you’re trying to slot together to keep ahead of the competing companies. Its breathlessly infectious fun, your completely absorbed by the process and due to the slab of cards in that deck, no game is ever going to play out the same.

“Science is many things, including a weapon with which to hit other scientists.”

Something else I applaud the game for is its vicious streak simmering just beneath the surface. It has just the right amount of utter bastard cards allowing you to derail ever so subtly a fellow competitors delicately balanced engine. For what is firmly in the realms of the Euro it’s rather enjoyable to encounter such deliciously shitty options and adds a welcome level of minor interaction/irritation avoiding the game feeling like a solo experience at the table. 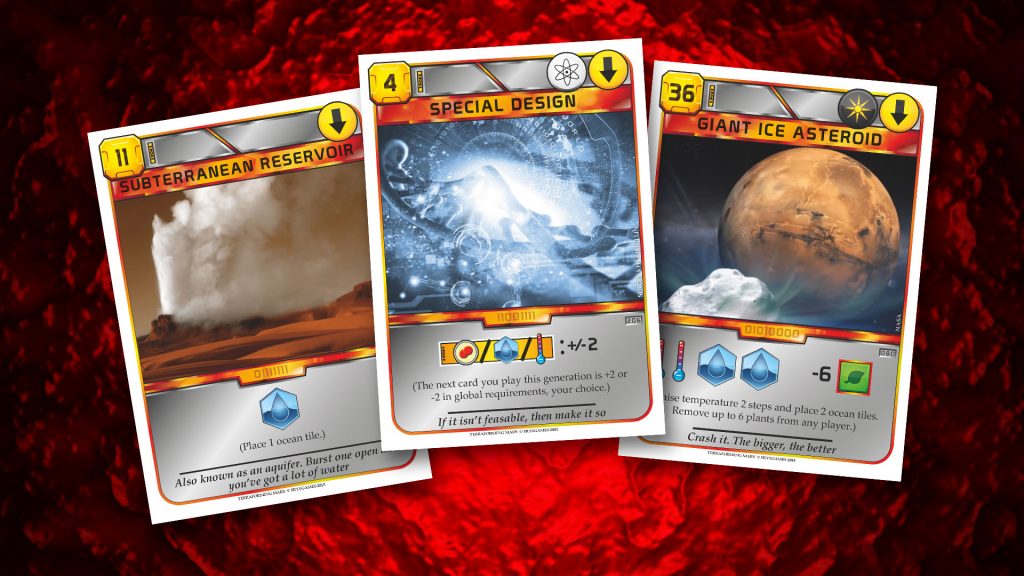 Yes, games can go on a bit with four to five players with the AP kept to a minimum then it shouldn’t become too tortuous. I’ve personally enjoyed whatever time I’ve spent on Mars and certainly never found myself clock watching. Some have bemoaned the haphazard nature of that vast deck of cards it’s a nitpick there are enough synergies throughout that you can nearly always find a workaround or a new avenue to explore.
The only real bum note is those player boards holding as they do all of your precious hard work a careless jog of the table has the potential to result in a seizure and table flip.

I would like to die on Mars. Just not on impact.

So there you have it. Terraforming Mars is a really rich and deep experience it even has real science stuff going on so you can be all educated and stuff. And as already mentioned despite its initially imposing appearance what makes this one so popular is its accessibility and the solid design going on under the hood that game engine just purrs along like a supercar driven by a happy kitten.

Value for money doesn’t so much come from the box contents more from the amount of times your want to get them back to the table.

And of course, as collectors, there is already an abundance of expansions available and on the way to further enhance your experience but we’ll get into them in a subsequent review.