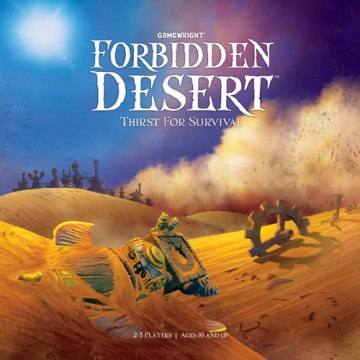 Quick to teach, fast to play.
Looks fantastic with a solid theme.
Lots of really cool components to play with including the funky airship.
Is ridiculous value for money.

Is unforgiving, you will lose and often.
It comes in a tin, only my biscuits come in tins!
Did I mention that this will kick your arse?

If you're up the challenge this is an essential purchase for family's or anyone that wants a short sharp shot of co-op play. It has a tin brimming with wonderful components and a price point that makes it impossible to not own.

Matt Leacock designer of Pandemic, Forbidden Island and Forbidden Desert seems like a nice enough chap, I can only assume he was picked on as a child, maybe he always lost those family games of Monopoly. The reason for this? Well take a look at his board game output it resembles a 70’s disaster movie marathon, in fact that’s it! Matt Leacock is board games very own Irwin Allen. His design output has predominately been co-op games, bloody merciless, vicious, take no survivors co-op’s with the players against natural disasters or rampaging viruses, all we need now is an earthquake or killer bees and he’s done the lot. Somebody somewhere wronged this man and he’s been seeking a reckoning for this against any poor passing slob who happens to pick up a meeple. 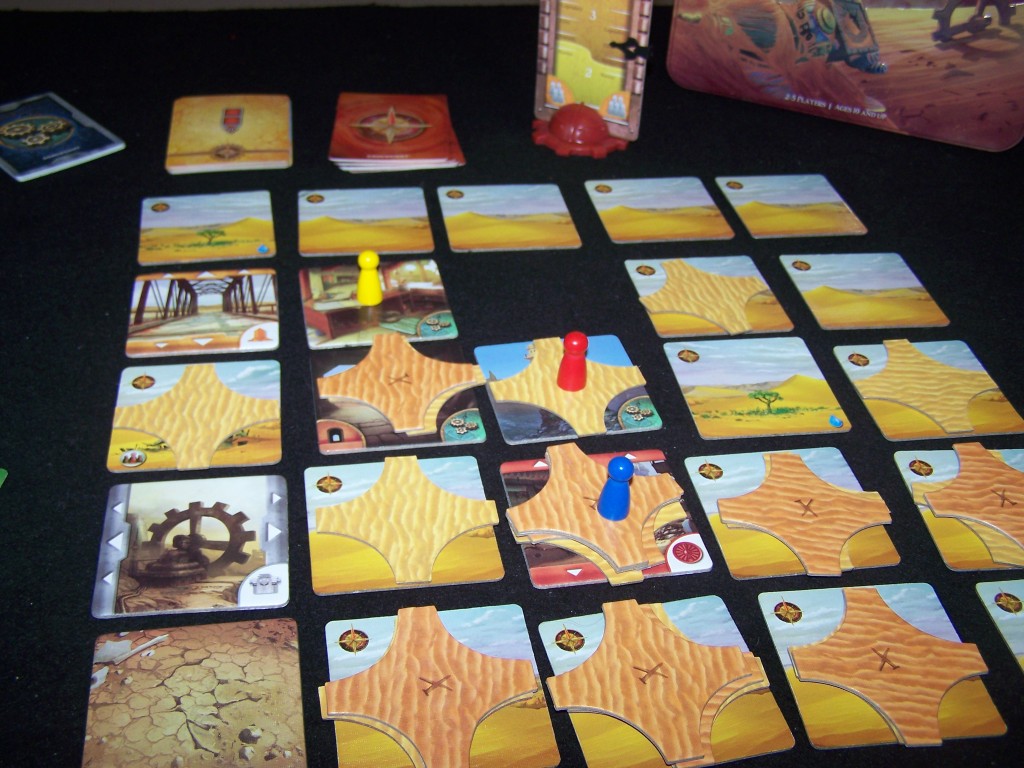 So Forbidden Desert is the sequel to Forbidden Island, a game that saw players desperately trying and often failing to escape a rapidly sinking island. Not content with that horror show we are now transposed to an ancient desert dwelling city, beset by constantly shifting sands and howling storms threatening to bury us all at a moments notice this is not a happy holiday. The set up is pure Flight Of The Pheonix by way of Indiana Jones, with players coming over all Jimmy Stuart with a bull whip after carelessly crash landing. Ahead they have the herculean task of searching the shifting dunes to scavenge the scattered parts of a steampunk chitty chitty bang bang style aircraft, glue it all back together and hot foot it outta there.

The game is played on a randomly assembled  five by five grid of tiles that our desperate survivors face the unenviable task of excavating by flipping to look below, some may contain cool gadgets to aid in moving about such as the nifty rocket packs or a Jules Verne style vacuum cleaner for sucking up sand dunes. Others may conceal a hidden passage, or ways to shield you from the merciless beating sun or possibly an oasis of life giving water. If you’re really lucky you might uncover coordinates to one of the scattered aircraft parts, track down both of these and they triangulate on the grid showing the location of the lifesaving components.

However there is one problem, sand. Once a player has completed their four actions they draw cards from a Storm Deck, how many depends on what wind force the storm is at. You see it slowly gathers up a head of gritty steam as the game progresses, aided by the dreaded “storm picks up” cards that increase its ferocity. Whenever a storm card is drawn the storm moves in the direction indicated on the cards, the eye of the storm in this case is one empty tile space that starts in the center of the grid but throughout the game will haphazardly meander about, helpfully every tile shifted by the storms passing becomes covered in sand, starting with an annoying light dusting to becoming a gritty pain in my backside burying everything beneath. Once a tile has accumulated more than one layer of sand it’s blocked becoming impassable and can only be interacted with once all the offending sand has been dug out, so freshly discovered parts can become buried or even our adventurers, OK not can, will, WILL be buried.

If you hadn’t already figured it out the Storm Deck is bad, nestled within is further misery waiting to strike like a particular ornery rattlesnake and that’s the “sun beats down” card. So as we already covered we’re all in a desert and you know the thing about deserts, aside from all the bloody sand is that they are hot, and the thing about people getting hot is they get thirsty. So every character starts with a sparse amount of water and when that jolly old sun beats down then they take a sip from their canteens, and when they run dry and this being a team game one goes we all go, its game over.

So there you have it, the game is relatively straight forward to play and teach so its sits nicely at the family level entry point, its a hugely rewarding puzzle to try and solve, and Leacock’s co-op’s are puzzles. This one just happens to be a jumbo 1000 piece set that has an annoying uncle passing every five minutes dumping the contents of a litter tray on you, then stealing that refreshing beverage you just prepared for yourself whilst all the while you are poached under a spotlight.

Components wise this is a home run, it comes with the neat little flying machine parts that actually fit together giving it a cool tactile edge to appeal to kiddies big and small. All of the card and tile art is top notch featuring a thematic steampunk Miyazaki Saturday morning adventure serial vibe, and as the whole venture plays out in under an hour it won’t outstay its welcome. If you’ve kept your distance because of the assumed Pandemic similarities then I can say that these games are like very distant cousins who happen to share the same self destructive gene’s, both want to ruin your fun, but go about that in completely different and dastardly ways.

Its replay-ability, ace components and low threshold to entry already make this a winner, that it can be picked up for essentially peanuts convert it to a slam dunk. If you have kids then this is a great alternative to the usual family friendly dirge that the big box stores offer, and contains plenty of informed choices and nail biting levels of excitement that you’re never going to get in a Monopoly. The fact that this is also a satisfying enough challenge that rufty tufty board game veterans will still feel their noodle twisted by the dusty dark heart of this adventure is the cherry on the top.

Mr Leacock once again we salute you, but I really think its time that you speak to somebody about these issues.