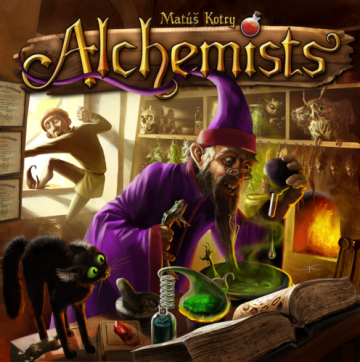 Great components and fantastic art.
An unique and challenging theme.
Its relatively easy to play once you understand what your doing.

This is a strange brew on the one hand its a fantastic and unique experience that utilizes the app to great effect, but the enjoyment can be marred by those early few plays and its certainly not one for the faint of heart.

Alchemists was one of the big hits from Essen 2014 with much ballyhoo concerning its reliance on an app to play. I was intrigued, not only by the apps inclusion (it did sound quite cool) but generally from what the game pertained to be, a heady concoction of deduction and worker placement all bottled together in that quirky fantasy world that CGE do so well. 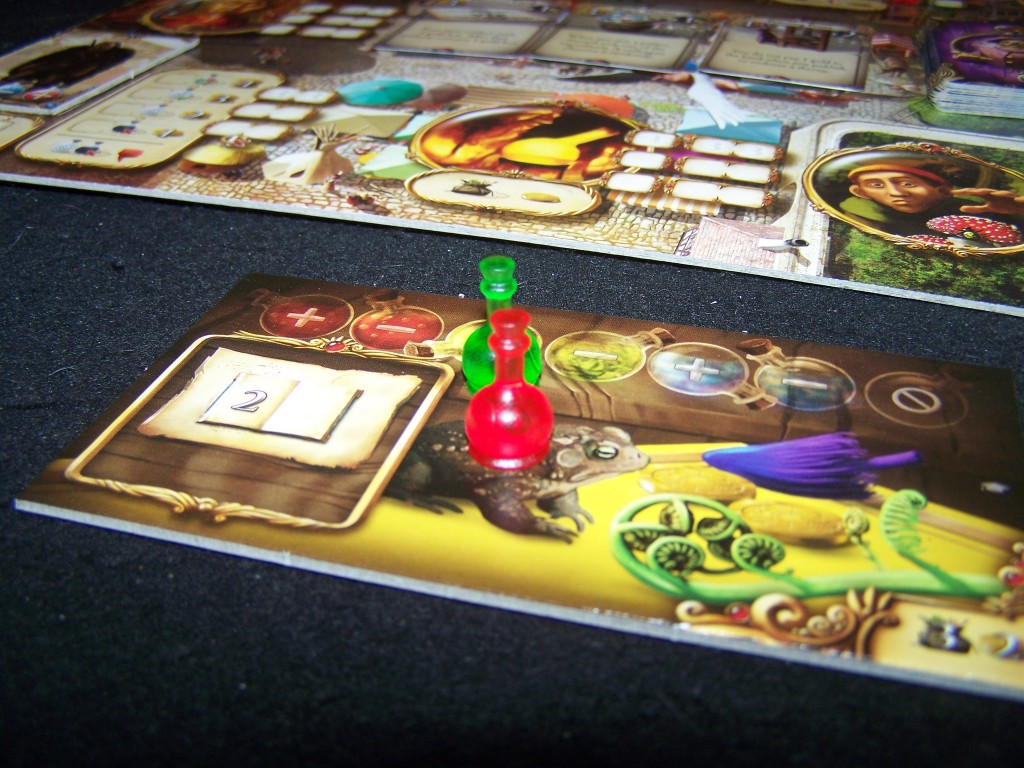 In the game players inhabit the role of back alley Alchemist’s plying their trade by combining dodgy ingredients usually found in dumpsters outside restaurants into volatile potions. It feels like a lost Discworld game with players lying, cheating and plying their dubious trade to passing adventurers before sneaking off to the Alchemist conference to brag about their findings, only to be swiftly debunked or discredited by their peers. If you’ve read any Pratchett involving the Wizards of Ankh Morpork then all of this will make you feel right at home like slipping on a pair of novelty comfy slippers shaped like a trolls paws. 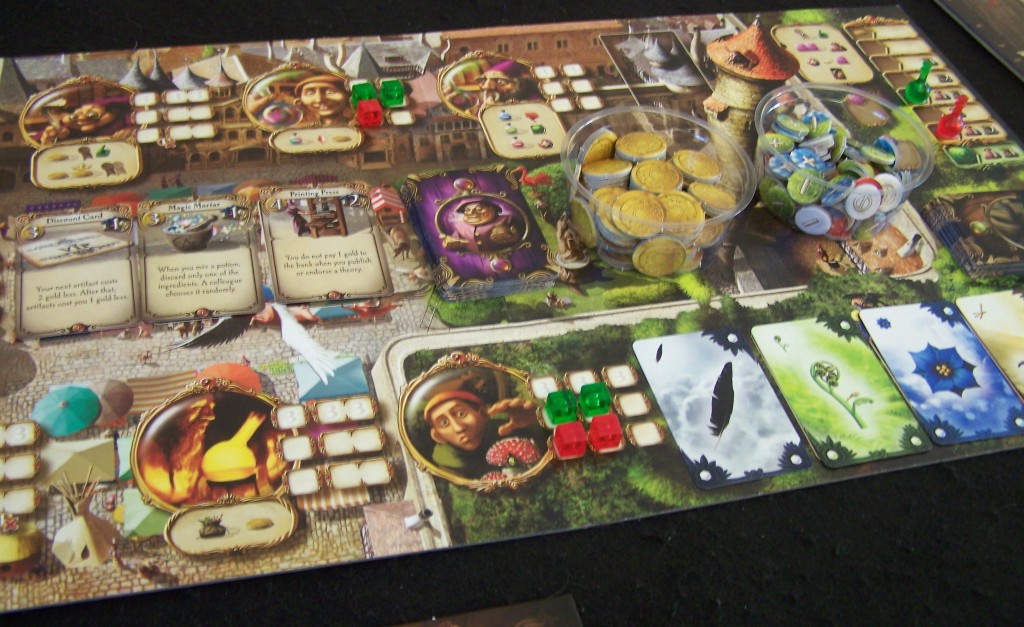 Czech Game’s wisely employed the marvelous David Colchard (Dungeon Pets, Dungeon Lords) for the art chores, and at first glance the whole package looks and feels like something Vlaada Chvatil’s fevered imagination could have cooked up, and its clear from reading the rules that Matus Kotry the games designer was inspired by the quirky fun that Vlaada loves to inject into his designs. Since its arrival I’ve had chance to  savor this game and my feelings toward it have been as mixed as any of the concoctions we will create in our musty labs, horror, frustration, elation, joy and utter confusion. Sit a while and together we will attempt to define the base elements of this peculiar and mind numbing of games and see whether its a potion of good fortune or an icky flask that leaves a bad taste in your mouth and a permanent limp.

So the game itself feels like a gloopy cocktail of Euro mechanisms with a frothy topping of worker placement all of which are simple to grasp, the explanation however required for players to understand how to go about playing, mixing the potions or more precisely understanding the findings of said experiments set’s such a high barrier for entry that many will run screaming for the hills when first presented with this puzzle. 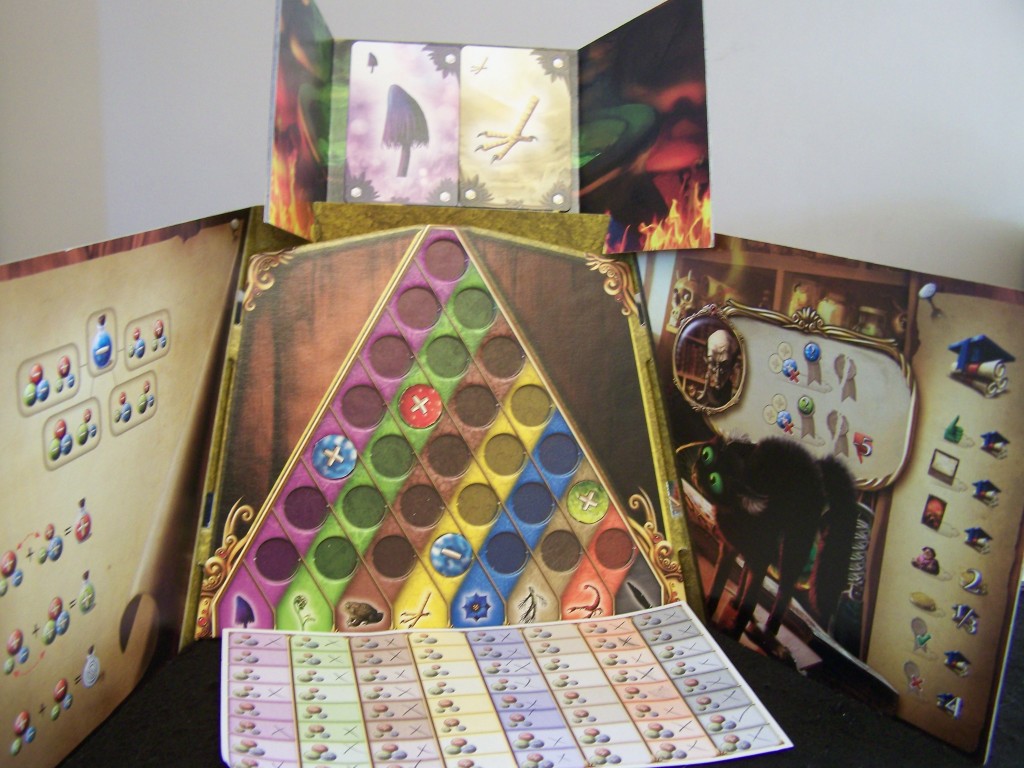 I’m not going to fully attempt this mighty feat here, just understand that each ingredient contains two alchemical elements that are a combination of positives, negatives and colors. Every time you mix a potion you use the app to scan the two ingredients and it will give you the results of that test, anything from a plus green potion to a minus red dependent on what the aforementioned elements of the two ingredients were, see what I mean. You then mark your findings on your player board, crossing off the elements you know that those ingredients cannot possibly contain based on the potion you just created. Its the the explanation of this process and getting players to properly understand what it is they are doing that is Alchemists biggest turn off, making the first play-through and explanation feel like attending an algebra lesson whilst being simultaneously water boarded.

However if you persevere you are rewarded, on subsequent plays it becomes faster and then you can start to uncover the game hidden within, turning leaden first experiences to shiny gold joy on return visits.

So leaving the app and the potions to one side the remainder is incredibly straight forward, it utilizes that start turn order choice previously seen in Fresco and Tuscany offering greater rewards for the lazy alchemist who stays in bed, but this can penalize you later. The early risers place they’re actions last and get to play first so there is a huge advantage to having this position especially in the later rounds of the game. As an example, one action is to test your potion on a student which seem’s a perfectly sensible thing to do, however if somebody before you manages to poison or paralyze the unfortunate test subject then he won’t drink anything your offering unless some gold passes hands. This can make or break strategy’s especially if you haven’t the gold required, with the game hurtling through its six rounds you really can’t afford to waste one moment. 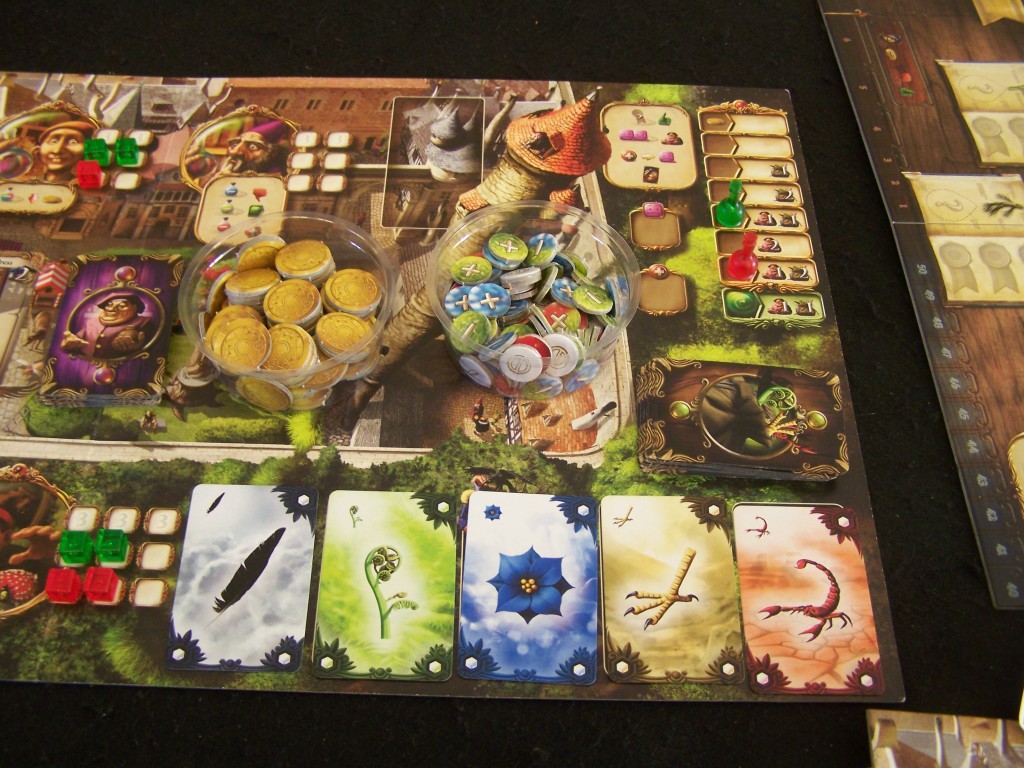 The remaining actions are gathering ingredients, transmuting them for cash, selling your potions to passing adventurers or buying special equipment and powers, the final couple of things you can do are either publish/endorse a theory, which comes down to either you nailing it through fantastic research or bullshitting completely which leads us on to the final option which is to debunk a fellow players theory. This is actually where the meat of the game is hiding and where your going to score all the lovely points required for victory or lose them all when your caught out publishing some complete bunkum, everything before this is a bountiful feast of flavor masking this cut throat race to beat your opponents to the punch and getting published first. There’s a lot of fun to be had here of boldly made claims and the satisfaction of discrediting sloppy lab work. I  just fear there is a limited life cycle whereupon eventually everyone grasps the fastest direct route to nailing chemical compositions then its a game of gaming the game, if you see what I mean. 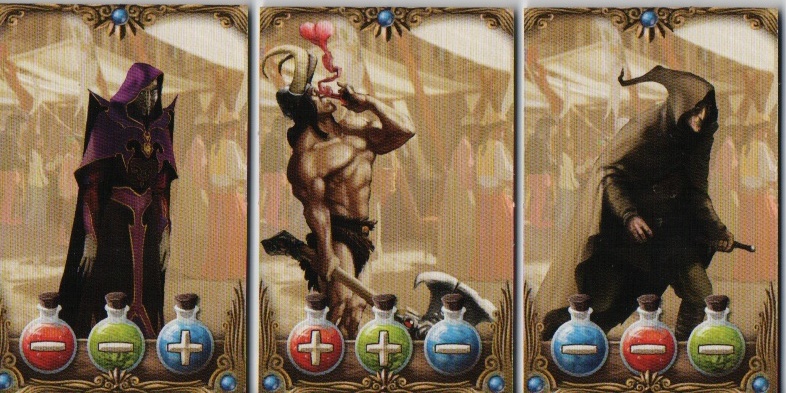 This is good solid entertainment with some refreshing and  interesting ideas, the inclusion of the app isn’t a gimmick and you can play without it although I suspect this was included more as a “We told you so” to naysayers than actually something any sensible person would want to do. Once you know and understand the deduction element of the potions then its a pretty speedy process and a rewarding play, although the short amount of rounds can feel punishing when your halfway through the game and still haven’t published a paper.

I’m giving this a cautious recommendation, it can be fun, and will certainly give the grey matter a bit of a workout but its an acquired taste. It really comes down to if you are willing to endure the pain of learning and teaching the game and whether you can battle past those first couple of sloooow plays, this is one of those games that you’ll going to have to work at to find the goodness within, rather like  batting at an armor plated pinata with a tickling stick.