A game based on the television show we all loved when it aired and said we hated once it ended.

I took a photo of Lost: The Game and I posted the result with my damp squib and realising that caveat emptor still holds true.

The thing is, I decided to chuck the sand and use the tin for something else, maybe my growing X-Wing miniature collection. I opened the tin and found this: 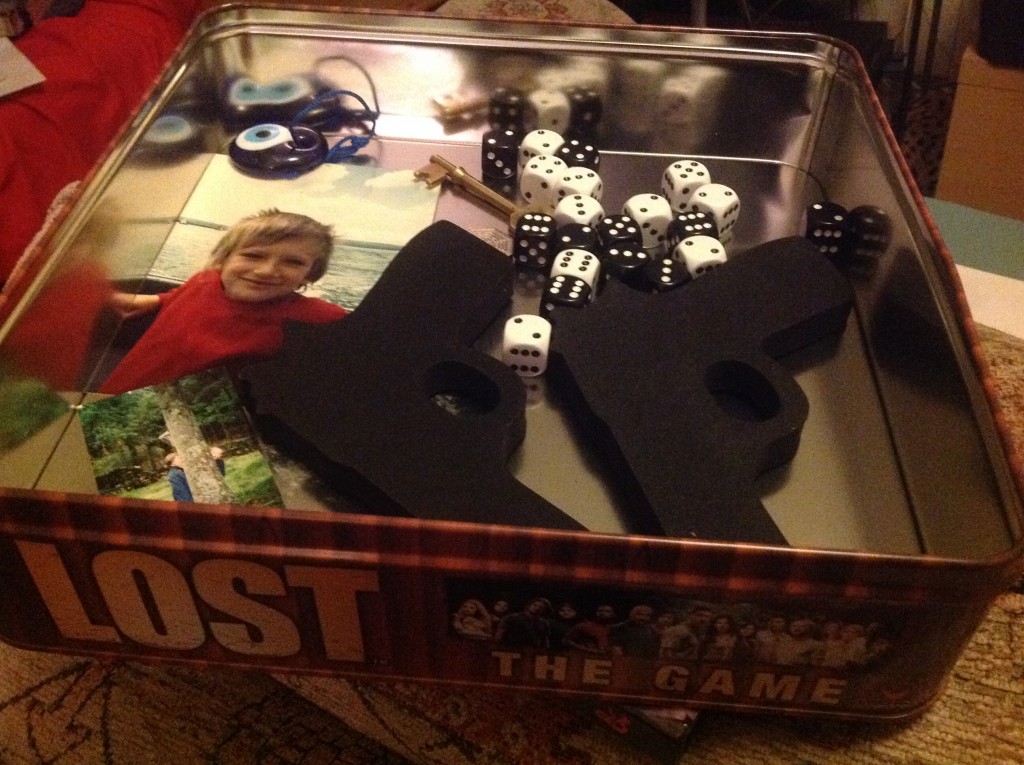 Okay. There are no instructions and the website advertised on the tin leads to a site about board games which are ‘lost’ instead of the Lost board game. There’s an interview with the creator online but that’s about it.

The contents inside are a bit unorthodox for a board game.

First of all are a ton of black and white dice. There seem to be an equal amount of both, but they were unbagged which in this day and age is an unprofessional sign.

Then there are two guns. Prop ones, luckily. I’m not sure if the dice are supposed to do anything with them, but that might make sense.

There is a coin with the Dharma Initiative logo on one side and the other one is blank which seems like a cheap move. I’m not sure if it’s used for the game or just a commemorative thing.

There’s a key to an old lock. No lock included. Maybe a Locke (sorry, I had to)

A weird thing which is blue and looks kind of like an eye.

Finally there are two photos of children. One you can’t quite see them, but there are two kids hiding behind a tree.. The other one’s clearer. It looks familiar. It looks like me. I don’t recognise the place but it’s… I’m pretty certain it’s me. I think I was about seven when I had that jumper. I remember that clearly. My family travelled quite often. There was a beach.

I have to go back.