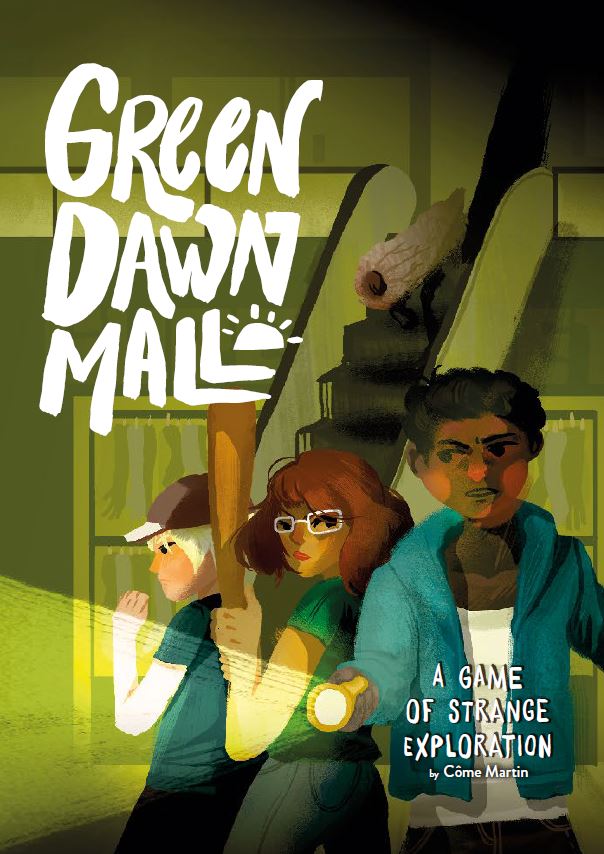 Chuck looked over to the giant plastic mountain which stood as the centrepiece to the toy shop. There was a ski slope and little plastic men travelled up and down the ski lift without ever being able to get down. There weren’t any people in the toy shop, surely it’d be safe. He walked out of the Fun Zone Plaza and into the shop, towards the mountain. He paused for a moment, hearing two noises; a distant rolling further back in the shop, and a much closer tapping from the plastic mountain.

He drew closer to the mountain, keeping his retro BMX nearby. The tapping was soft and sounded like it came from inside the plastic shell. There was something else, a whispering.

“Hello?” he said to the plastic men as they went past him on the automated ski lift.

“Hello,” came from inside the mountain, making him jump.

“What are you doing in there?”

“We’re trapped,” the voice said. “My name is Cuddles. Please let me out.”

The soft padding noise against the plastic mountain got louder. It wasn’t from one point, but it was all over, several hands trying to reach through to the outside. “Please let us all out…”

Green Dawn Mall is a surreal adventure game about teenagers exploring an endless mall trying to find their missing friend. It uses a simple rule system and a ton of randomly generated shops to create a unique, weird experience.

Green Dawn Mall was released as part of Zine Quest 2020, back in what feels like an eternity ago. I mentioned it in one of my Zine Quest round ups. It was one of the first projects I saw and I fell in love with the concept.

The book itself is ninety-six pages, more than I’d expect from a Zine Quest project, and yet it makes so much use of that space. It opens with this: 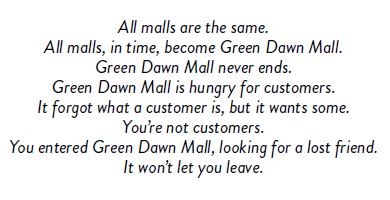 Cool, right? It’s nice and evocative. I’ve used it to open each of the sessions as a kind of centring statement. You then get into making characters, which can be picked or rolled from a list of their personality traits, school topics and hobbies. Then you fill in up to six items in their backpack. Finally, we all come up with details about the friend; who they were to us and why they went into the mall.

The system’s easy enough, rolling one or more d6’s and aiming for a 5 or 6 on any of them. You start with one and get extras for using objects or traits, as well as using other people’s if they’re willing to help. With your character and the quite simple system, you’re ready to go!

I’ve been watching a lot of the Dead Malls series in the past year. It’s weird and fascinating watching people going round falling apart malls, often intercut with images of how the malls were, and grainy footage from adverts and TV shows set around the same time. It was good fodder for thinking about these teens trapped looking through a mall which went from intact to deteriorating and back. They’re like the old ruins of the late 20th century. Foreboding and like a horrible fairy tale.

The mall in Green Dawn Mall changes a lot, but there’s always artifice everywhere. All the items are a little shabbily built, all of the security a little too much like mannequins. Or maybe they are mannequins. There are signs of lost kids having made their way in here a long time ago. It all starts normal, though. Relatively normal.

The game uses an Odd Level, which potentially escalates as you travel through the mall. When it goes up, the options for each shop get weirder and more disjointed. You also get closer to the Heart at the centre of Green Dawn Mall. It’s not quite like the Heart from the Heart RPG but at the same it’s not not that.

The GM rolls for the amount of shops in each plaza, and the hallways contained there. You might also get events popping up, and random members of different factions such as some freedom loving mannequins or anti-capitalist vandals. There might also be rooms which aren’t shops. You might end up in a supply room, a security room, or spaces carved out for new shops. 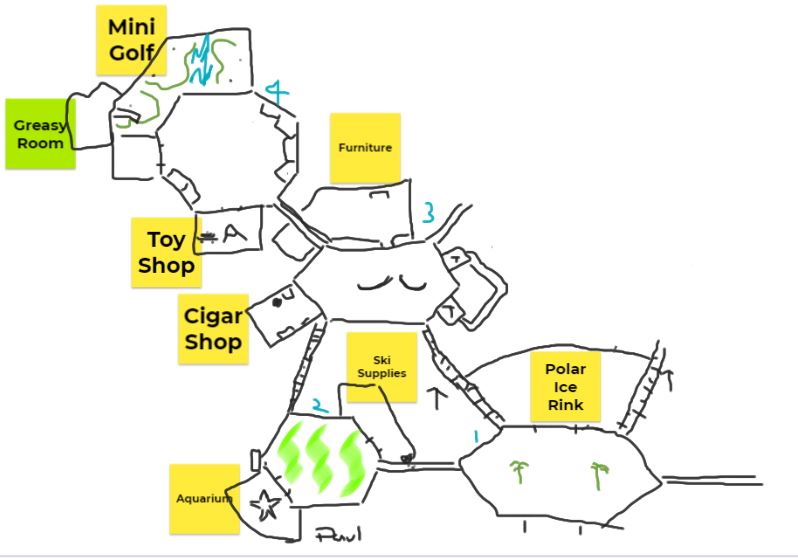 The shops get a good share of the book, using a d66 talk (a d6 for tens, a d6 for units) and there’s a page per shop. Each one contains an entry for each odd level, 1d6 NPCs and 1D6 odd items. If those weren’t enough tables for you, each of the factions and aspects such as non-shop locations have tables. The plazas and hallways have them, too. It’s like old random dungeon crawls of old, just with a very strange mall. Sometimes it can seem jarring, but then that can be used for effect to keep things weird.

The endgame happens in a couple of ways. I won’t get into those here as one of them is just delightful, but you can probably imagine what they entail. Finally, the book adds a number of variant scenarios which you can use with Green Dawn Mall, including burglars and journalists. Personally I still prefer the default setups of kids finding their friend.

I ran a game of Green Dawn Mall for two and a half sessions, thanks to internet ghosts causing us to end the first session early. The second session we were concerned going in that we were going to continue having any issues but had a worry that maybe it wasn’t the technology but the game. What if it was just a broken game, resisting our attempts to play it. That wouldn’t make a good review.

Luckily the game worked fine from the second attempt. As we’re still in the ‘rona times, we used Discord for communication and dice rolling. We had a pretty basic character keeper I made on Google Sheets, shown here with our cast: 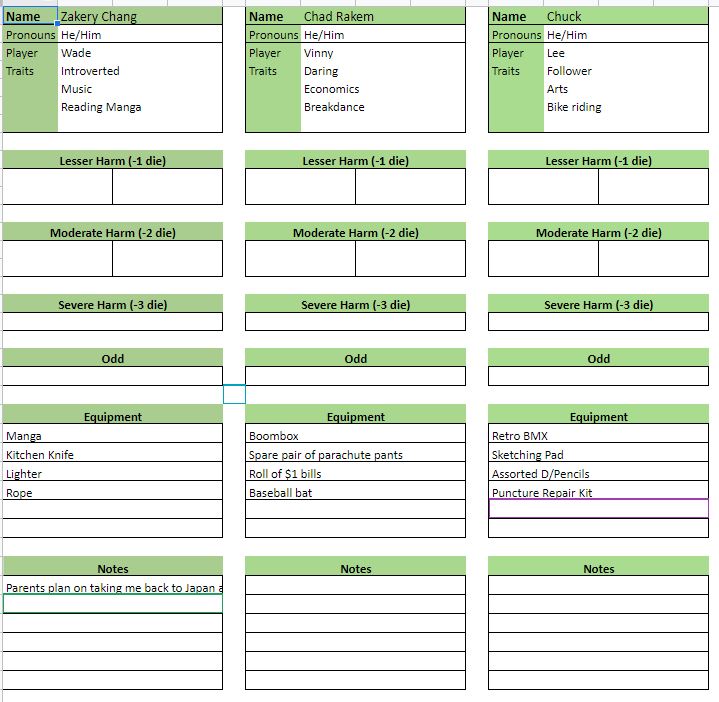 We also used a jamboard. I’d decided to roll up five plazas early so I could quickly summon up descriptions of areas. The group did their best to dive into places I’d not generated yet and it took a little bit of vamping for time while I was rolling on tables to generate other plazas, but I feel they all worked naturally enough. 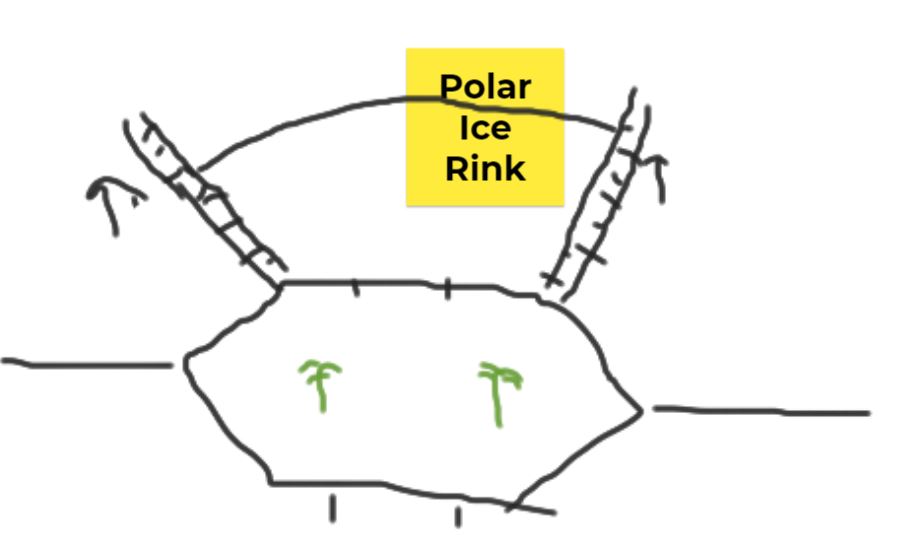 The group were looking for Felicity, a friend who’d discovered the escalator down to Green Dawn Mall and travelled there to locate some kind of lotion to give her scales (she really loved dinosaurs). As she never came back, the group wandered down to find her.

They entered the Penguin Plaza (I named the plazas based on the themes the shops implied) and the automatic doors closed behind them. They were in Green Dawn Mall now. At first, despite reading the player agendas, the group were still skittish about interacting with the rooms. They weren’t keen on Sam Skates, the ice skating guru who wanted people to join him forever in the ice rink. 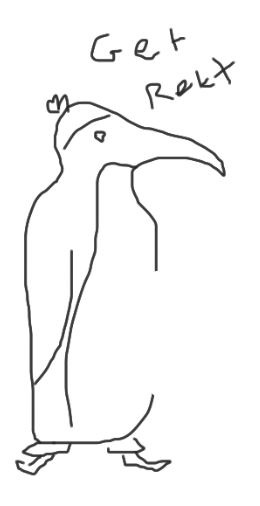 The Wet Plaza was the next zone they went to, featuring an aquarium and a ski supply store. Chuck, played by Lee, investigated a starfish who was emptying out the fishtanks. He realised this was a giant starfish rather than a person who was dressed as one, then stole a bag of fish and ran away.

We lost one player at the end of that session, as he was busy for the next couple of weeks. I replaced his character with a mannequin when the other characters weren’t listening. A player who joined us for those sessions had also got lost in the mall. They ventured into the Dad Zone and were chased around by a mannequin family who were trying to chase off intruders. In the Game Zone, one of the group made friends with a skateboarding shark toy and didn’t listen to the soft toys trapped inside a plastic mountain. One of the group even found their first behind the scenes area with a lost and found sorting area organised by giant rats. The room was also pretty weirdly greasy on each surface, even in the air. He mounted a swift rescue of an anti-consumerist teen who was trapped there and helped direct the group to where their friend might be. 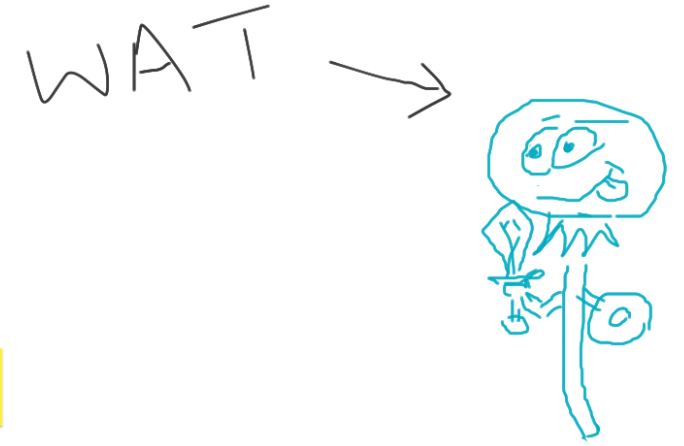 They strayed into the Mirror Zone, where a shadow creature tormented from where it had been trapped inside a display car, at the same time as Chuck was fighting against a giant paper snake from a toy shop. It was brutal and they all nearly died at the hands of these creatures, but eventually they escaped by driving the display car into the Sweet Plaza. They eventually found Felicity trapped in a hole in the ground in a pharmacists in the Beauty Zone. It had turned out she had a bad case of eczema and kids at school had taken what she said out of context.

Having found her, the group found the way out of the mall and went out, where Wade’s character was waiting for them after turning out to have been playing lookout all this time. They all left the mall as the sun rose on a new day. 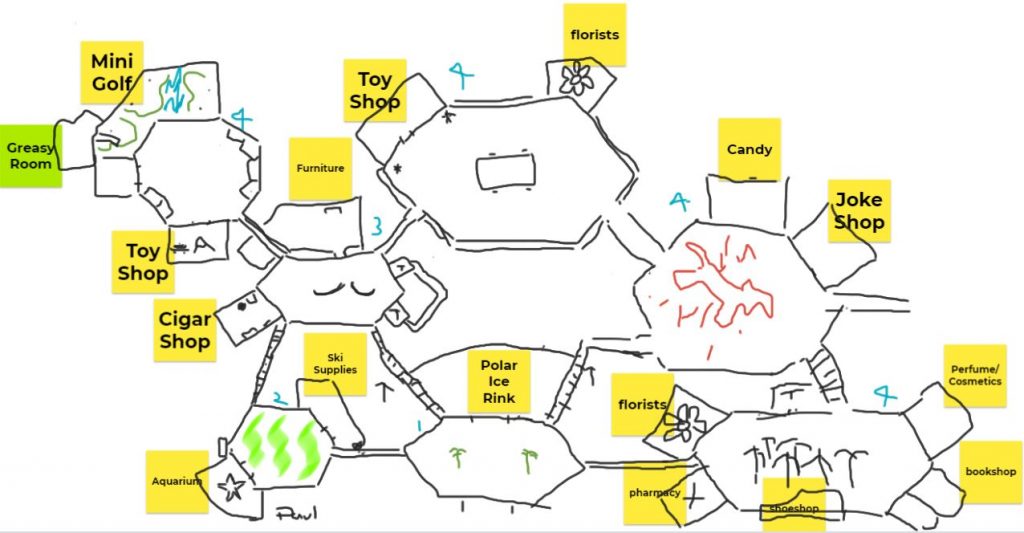 I think this is the first randomly rolled dungeon crawl I’ve run, outside of maybe Heart, although that was more randomly picked than rolled on tables. It was a really fun game, with far more to do than just combat. My group’s only real fights were fleeing the mannequin dad, a mannequin security guard and the giant paper snake. The tables on each page are really cool.

If you like the mall bits from Stranger Things season three, Eerie Indiana, the Dead Malls videos or just plain surreal fiction, you’ll love this game. It’s definitely going to see use for another one shot night and I’ll be surprised if any of the results I get on the tables bring the same shops back that I encountered here.

You can buy Green Dawn Mall here and there’s even a pay what you want two player demo version/prequel game, First Excursion, here.

Finally, for my players and for you, here’s my sheet of notes from the sessions, to show the easy chaos which the game brings: 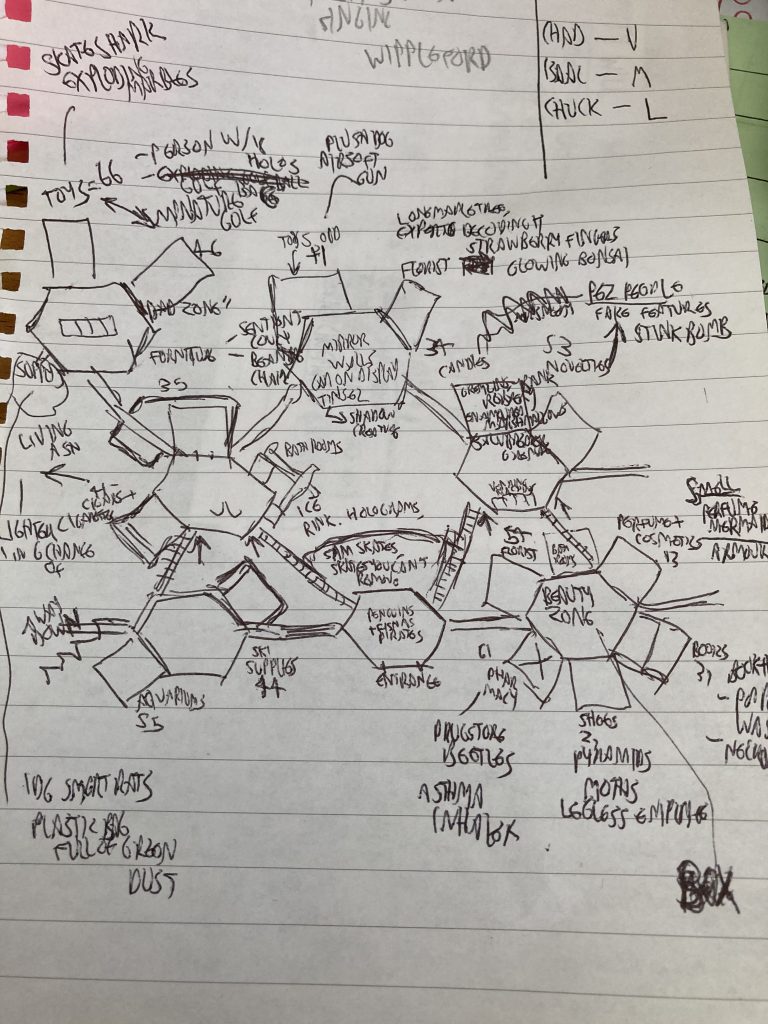