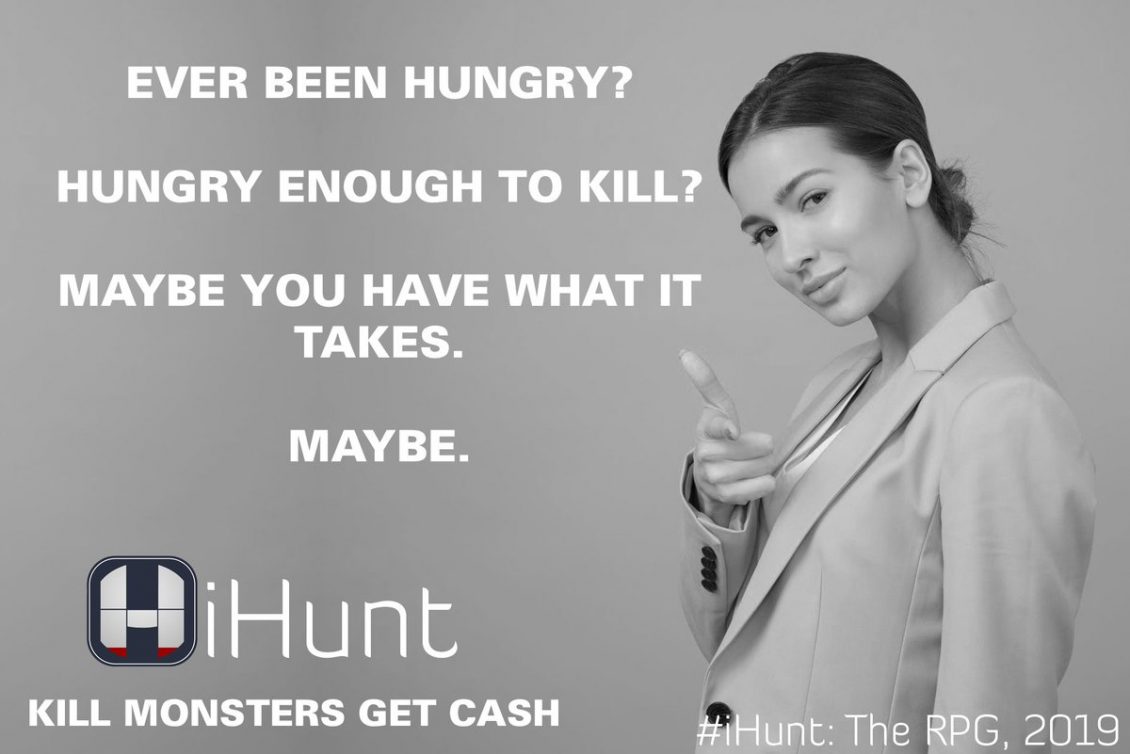 I buy a lot of RPGs and don’t always get the time to run them, or haven’t found the right group yet. In an effort to read and talk about more RPGs, I’ve decided to start having a look at some RPGs I’ve been reading recently.

I wrote these quick reviews originally in January 2020, so many years ago. It felt timely to group together three reviews of games which have solid, interesting political themes and are all good reads. I’ve still yet to play any of them, but I’m eager to try them all out. 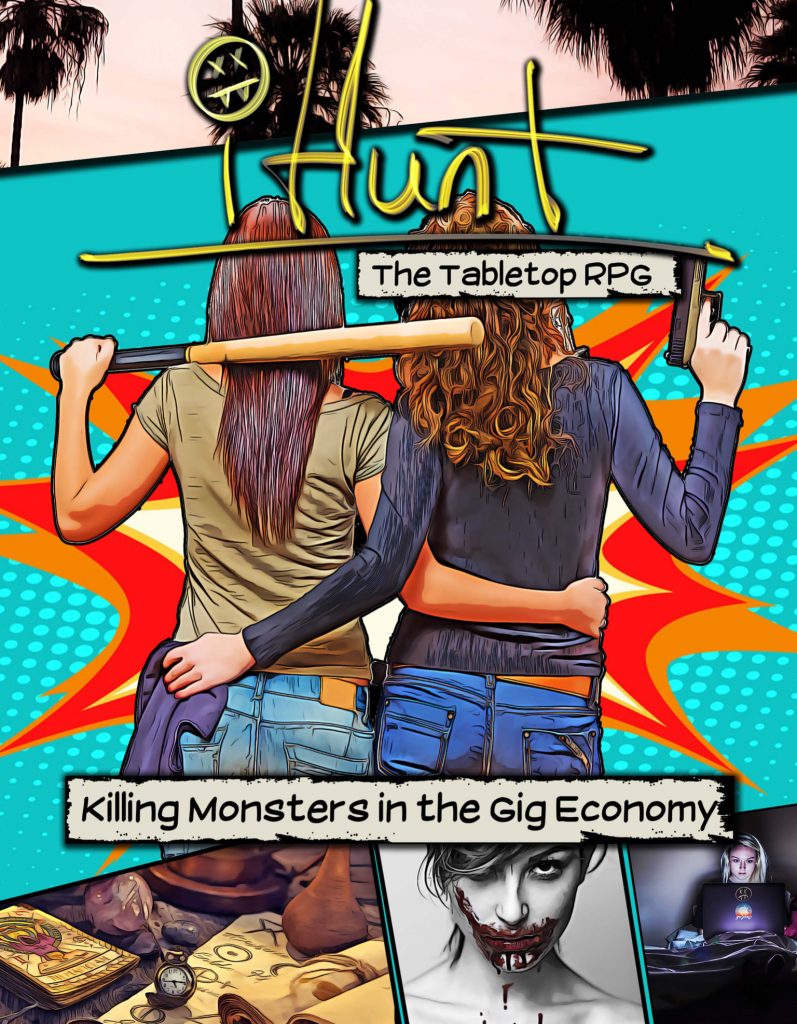 The tagline for #iHunt is ‘Monster Hunting in the Gig Economy’ and that’s pretty much it. Olivia Hill wrote a bunch of books set in this world already, showing how an app has ‘disrupted’ the monster hunting market. Instead of ancient arcane orders, the people who end up desperate enough to take on these overly-powerful, supernatural creatures are impoverished millennials.

I was a fan of a lot of dark worlds back in my day and there are a bunch of other games about monster hunting in a modern setting. This takes all of that and adds an interesting and horrifying elements… capitalism. You have a full time job as well as hunting monsters. You have a body that will break and a landlord calling you for money. It’s a rough life out there, but together you might be able to survive.

So that sounds like a bummer, what I wrote up there, doesn’t it? The thing is, it’s written really well. The tone of voice for the whole book moves in a quick, acerbic fashion. The author sometimes gives over control to one of her characters from the #iHunt books, something which comes off well rather than hokey. Personally, I’d just come up for air after reading City of Mist (more on that later) and this was a joy. The design work on each page is sumptuous, shifting styles in each chapter, or when factions are in play then to fit them as well. The author’s savvy about the kind of work she’s talking about, making sure not to deal with poverty tourism and not to make it all too grim. There are specific sections explaining about how this isn’t for fascists (good), as well as how the demographics of the characters are generally poor, LGBT, with debt and chronic illnesses.

So up until really recently I worked on a telephone helpline for workers whose employers were trying to rip them off when it came to pensions. For me it was one specific field, however you’d end up hearing more and more about how exploitative employers are, how fucked people are out there. I’ve had my own issues and still do, but it’s so much worse now for folks. #iHunt feels like that, but with the added catharsis of being able to fuck up some monsters and survive despite living in a system that’s rigged against you.

It’s like Buffy, Supernatural and all those kinds of things ported forward to now, where no one has money, the world is on fire and everything’s rigged against you. One of the expansions even includes topics about hunting monsters in a time where folks are quarantined and protests are pretty constant.

Fuck yes. This is the good shit. I know there’s a quickstart game coming out for it soon and I’d really like to try out a campaign to make use of the progression mechanics.

#iHunt is found on itch.io and DriveThruRPG. You can download the first 69 pages (nice!) of the book for free on the Itch page and buy the novels here. Finally, there’s also a Patreon for Machine Age Productions, specifically funding the creation of several zine supplements or as Olivia Hill has called them, ‘zupplements’. The first hit is free and is about a little bit of social mobility, with a more career-driven class and some high society organisations to have to deal with. Future releases involve potentially being monsters and a Witcher hack. You can get in on the Patreon here.

I tweeted out a read-through of iHunt recently, which you can see on this link. I’ve started doing these with some RPGs as a method of helping to go through my collection and learn more systems. 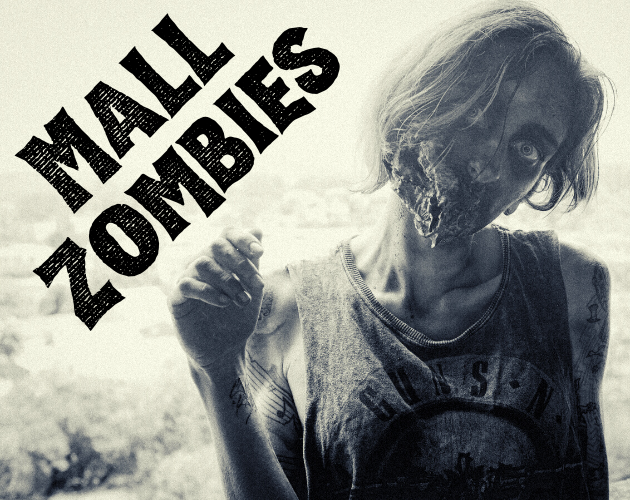 Full disclosure on this one, the author, W. H. Arthur and I are good friends. He did not know that I did this, however. I saw the subject matter which fit the remit for this trio of reviews and thought I’d check it out.

Hah, well, that’s a bit of a loaded question here. It’s about zombies, but it’s about protest and police violence. This isn’t Zombie World, it’s a small glimpse of a narrative, intended to be played in a short sitting and possibly even with one half of the game followed immediately by the other to draw comparisons. Initially the game and the rules are about raiding a mall for supplies without being eaten by zombies, then you turn the page and it’s an identical game about protestors at a mall trying not to be caught by the police.

You use a deck of cards to represent the needs for your group of survivors, the types of shops you’re either looting or protesting at, and then when the zombies or the police come, you’re going to be the recipient of some violence. 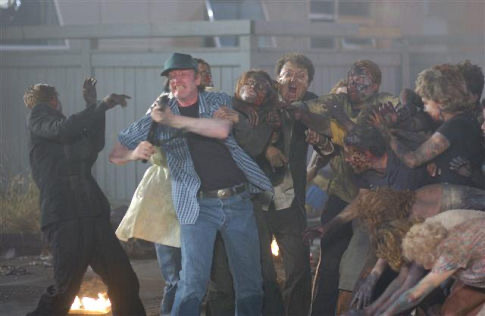 It’s utilitarian in execution, being one page per game. The layout and look is almost identical between the two. Players will need a piece of paper for their characters and the game rules themselves can house the shopping list of what your characters need.

It took me a couple of goes to make sure I knew what was going on with the system and what characters do. Going through the rules, I think the one criticism I’ve got for it is that there’s not much of a way of showing group action or organisation. You’re individual units and while you can use your character traits to possibly make things easier, teamwork isn’t reflected.

Well W.H. Arthur is from Hong Kong, so this hits close to home for him. I can’t pretend to be anywhere near as aware or to be as emotionally affected by those scenes. I’ve done the white Westerner things like listen to a This American Life episode about it and nodded in a vaguely positive way when I see some graffiti in town which is pro Hong Kong and anti-police.

This feels on the nose as far as the message it’s getting across, but specifically and intentionally so. It’s an uncomfortable message and reminder about police violence.

Yeah, I’m at least going to try it solo as I’m curious to see how the system works. I’m not sure which version I’ll do, or whether I’ll try them one after the other just to get the full experience.

Mall Zombies can be bought at W. H. Arthur’s itch.io store page. It’s currently pay what you want, although that may change over time. There are a number of other games at his store and I definitely recommend Sol Survivor after a really fun playtest game I had of it. He also has a Patreon found here.

This is an old game, compared to the others. There were a few spells where Bully Pulpit Games released free games which varied from a couple of pages long to more intricate releases. This was a really impressive release and something I’ve been meaning to print a copy of for a game night.

‘Terps is a game about military interpreters in a science fiction setting. You are locals to the planet Sarai, which is under occupation by the military forces of The Combine. Their soldiers, COMPROFOR, have taken on several locals with promises of a life elsewhere, safety for their relatives, things which they are frankly unwilling or unable to actually provide. You play out scenes with two to four player characters and two GMs going through the lives of these interpreters. They are not popular locally and either not liked or thought about at all by COMPROFOR. Each scene is short, delivered on cards marked ‘work’, ‘process’, ‘family’ and ‘group’. After enough scenes, COMPROFOR will leave the planet and the players behind. It’s an obvious, great and horrible allegory for American military occupation and the effects it has. 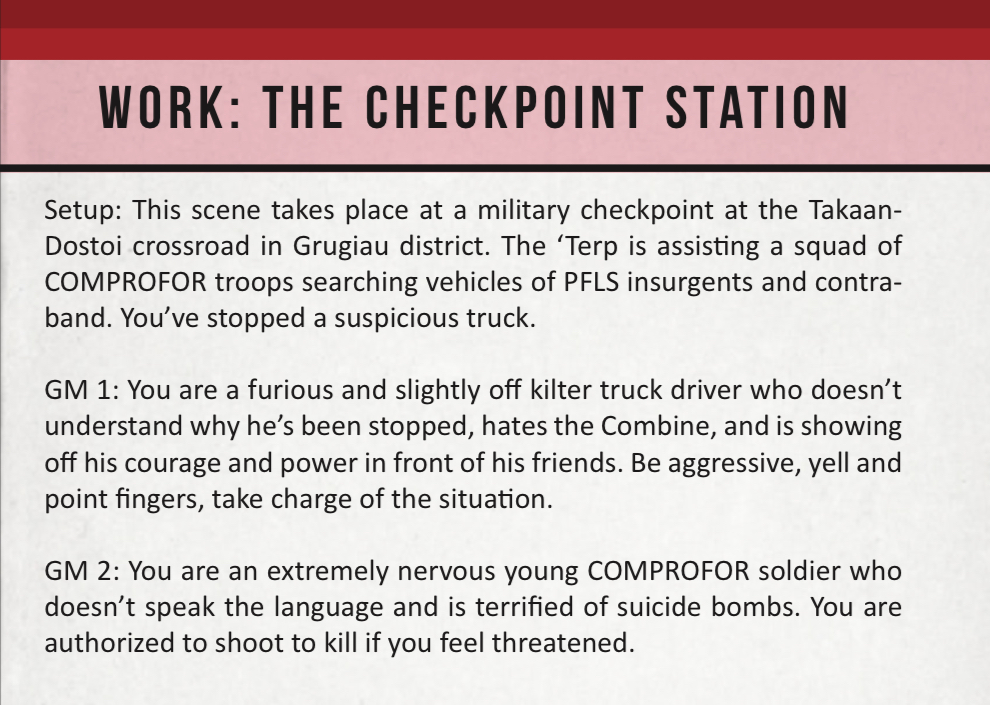 As I said, this is mainly delivered by cards. It’s a short read and fairly clipped in that manner. Around the time this came out I started to notice Jason less as ‘The Fiasco Guy’ and more that it was an outlier compare to his games which had loads of political themes like Grey Ranks, Last Train from Warsaw, Durance and Winterhorn. He uses the mechanics and play tools to make short evocative scenes, saying everything they need to and not sticking around too long.

It reminds me of This War of Mine in a lot of ways. Both use game mechanics to deliver statements about war, specifically about being people caught in the storm rather than one side or another. Each of the six characters has their own name and the name they are patronisingly called by the COMPROFOR. They also have the horrors which will be inflicted on them and their families if the Combine pull out without them, a fact we know will happen.

God, I wish. This feels pretty rough and a hard sell. Until I revisited this document I didn’t realise how few pages it was. I might have to get some card, print it out and add it to my Bully Pulpit ring binder on the offchance I get to run it.

The prototype is currently free on Bully Pulpit’s own site. They have several other small games on their site, along with more through their Patreon, and an Itch.io page.

There are tons of other RPGs with political themes deeply ingrained into them and I’ll probably revisit the quick reading review format soon with this or other topics. If you’ve got any recommendations for games which would pair well with the above ones, mention them in the comments!