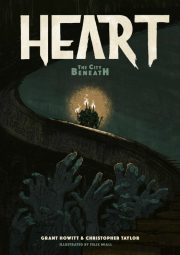 Charlie takes some time out of his incredibly busy schedule of writing comic books and running an abundance of RPG’s to take a look at  hotly anticipated forthcoming Kickstarter from Grant Howitt a game of dungeon crawling mayhem Heart.

Game by Grant Howitt & Christopher Taylor, with Layout by Jay Iles and art by Felix Miall.

Heart is a game of body horror dungeon crawls. It’s set underneath the mile-high drow city of Spire, where reality frays and fractures. At the centre beats The Heart and the Red, Wet Heaven. Aware and horrific, it creates creatures and places out of anything left over from the City Above and from the imaginations of people who venture too close. Maybe you’re driven to the Heart by the call of adventure, duty, debt or the siren song of the Heart itself. Whatever the reason, you’re doing what most sane people won’t and venturing ever nearer to the Heart.

Looking at and critiquing the book at this point is a little tricky as it’s a 58 page playtest document. It’s far better put together than some playtests I’ve been part of in the past. There’s some gorgeous art, a lot of which we’ve seen online by now. 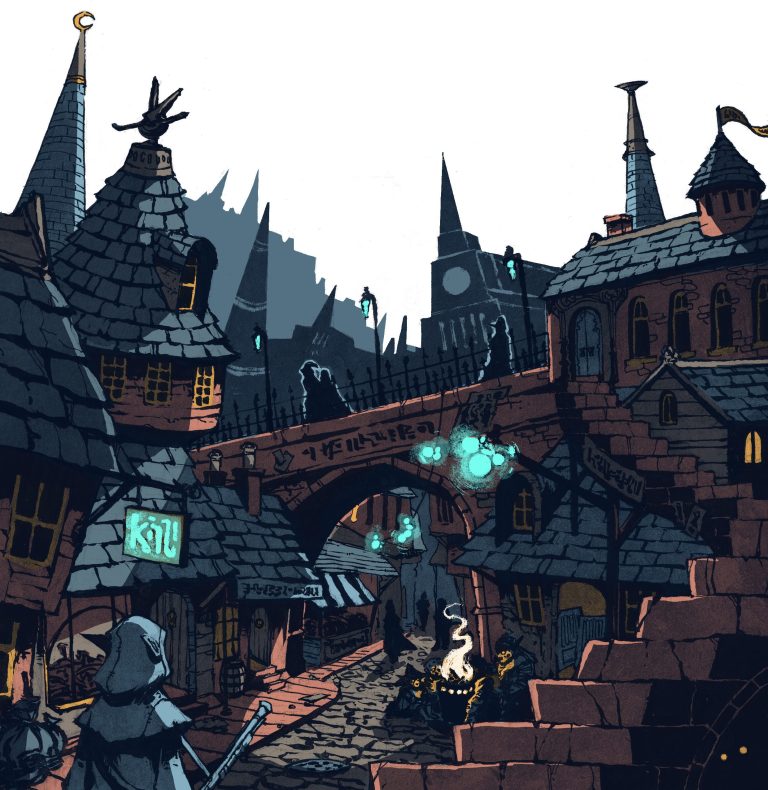 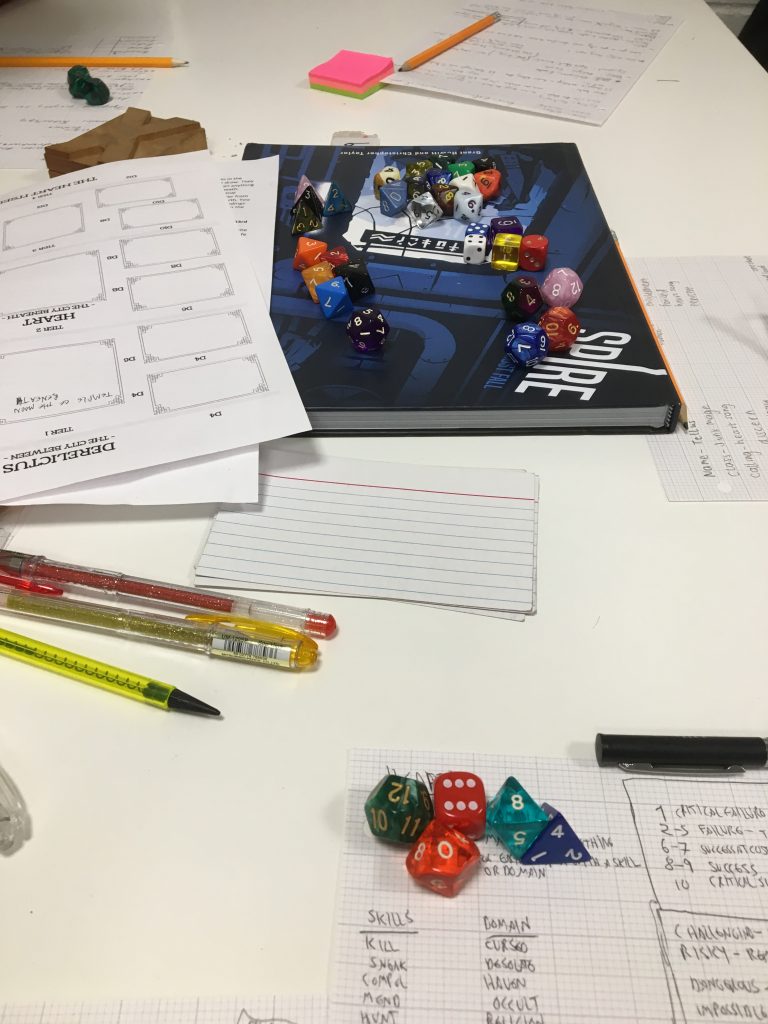 When you suffer damage it goes into one of five different thresholds which are changed from Spire to fit what’s relevant to these dungeon delvers. Blood and Mind are both still here. Supplies covers your general gear and tradable resources, so you can suffer damage to it in order to buy services. Fortune is when your luck begins to run out, which you really don’t want when you’re in such a deadly place. Finally Echo is your ability to withstand the ravages of the Heart and the ever-shifting realities in place underground. One of my group was stabbed and killed in our game, only to have an alternate version of him fall in through a crack in reality in time to see his own murder. That player kept playing that character, aware that this wasn’t his world and that he’d just ‘died’. The rest of the group kindly removed the body from a cannibal merchant who was eyeing it up.

Your character is built from two aspects, the first of which is your Calling, the reason you made the terrible decision to spend your life exploring a dungeon made from ruins and fractured realities:

The Callings give you one special ability and ‘beats’, which are how you gain advancements. I love beats. If I run 7th Sea again, I’m stealing them. They’re little narrative triggers which let you advance. Triggers like “Take Major Blood Fallout”. I’ve never seen my group aim themselves at damage so much as they did with these characters. 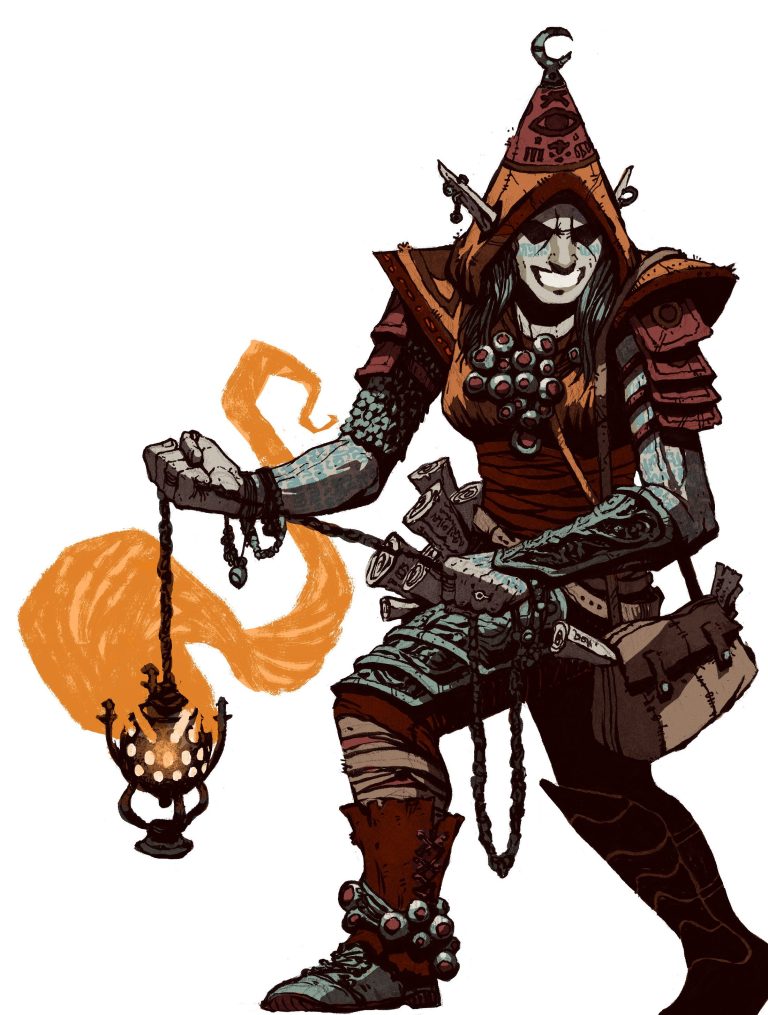 Then there are the character classes. These are were your initial supply of skills and domains come from, along with special abilities. Unlike Spire, you have major abilities you can tune with minor advancements. You can also pick from multiple advances to begin with, allowing an amount of customisation out of the gate. The classes are:

The book has a system about how to craft missions and has a sample one included. There’s a kind of abstracted map template which can be populated as characters find routes through the land beneath and into the weirder tiers. Play mainly takes place with players travelling from landmark to landmark, encountering the things there and the things between.

As an example, my group were in a Temple to the Moon Beneath, where they were given their mission by a witch to find something for her. They were given Box Beach as the first landmark and had just the one encounter to deal with on the way. An encounter could be just a brief meeting with someone, a weird sight or obstacle. Or it could be the Bone-Pit Brigands who hid in piles of bones to rob passers-by. This is a game with no initiative system and the GM doesn’t roll for anything other than checking whether a character’s damage turns into some Fallout, like a broken arm or a monster stalking you through your imagination. That one happened pretty early from the Bone-Pit Brigands.

One of the brigands fled from the group and ended up in Box Beach ahead of them. The group walked through obsidian pebbles and through a kind of Under-Dungeness filled with storage containers and terrifying giant seagulls. A couple of crab-fishermen tried warning the group away and turned out to have been held hostage by the brigand. Once the group finished him off, they were rewarded with some restorative tea with crab milk. Also crab meat. The fishermen really liked to use all of the crab. 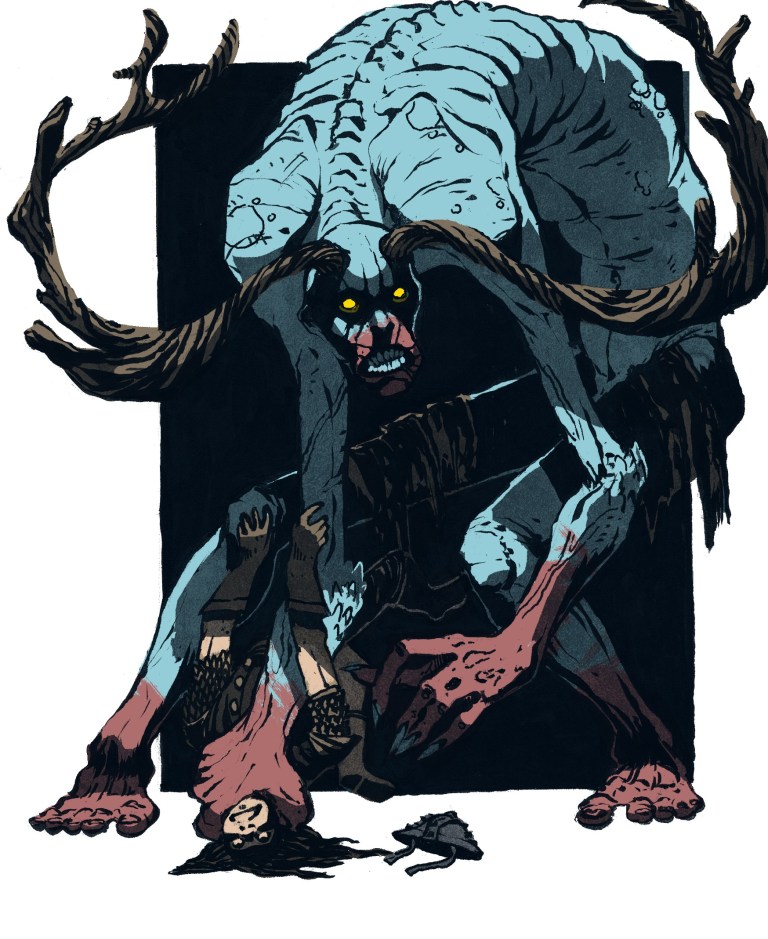 The group were pretty battered through the three sessions we played, spending a lot of time dealing with overly-polite cannibal cultists, pig ghosts and the soft-boned, coin-eating Incarnadine. It took a couple of sessions to realise that the group could suffer Supplies damage to help heal up at havens, instead of just using items they’d found to barter with. At times the wild felt almost safer than ‘civilisation’ because at least you could tell what might kill you.

I entered sessions with a printed list of potential encounters and landmarks, along with a handful I’d created myself on the day of the session. It was easy enough to mix and match for the game, depending on the time we had left and the way the session was going. As someone who doesn’t care for dungeon crawls, it all felt a lot more natural, large and fun to create. I think both the lack of defined locations and the ability to go buck-wild with the things the group had to deal with were great. There were some amazing moments of players using their abilities, such as the Vermissian Knight finding a tunnel where the train lines would have gone through Spiders Lake, giving them safe passage.

Tonally, it felt like Borderlands and Bioshock mixed with Annihilation and the works of Junji Ito.

If that sounds like fun, you can still sign up to the playtest up until the end of August by going here. The game’s going to Kickstarter at the end of 2019; given how cool the 58 pages of playtest material are and how good the Spire books have been, you are not going to want to miss it.