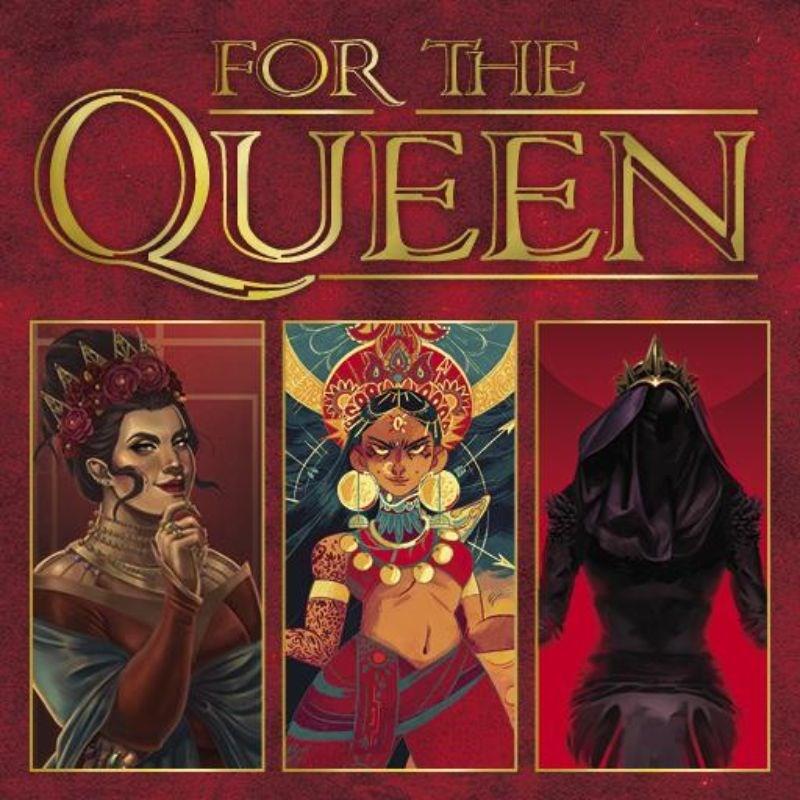 For the queen is a game that we discussed in our podcast episode 58 (no you can’t hear that yet as Ben hasn’t sent me his audio files) so while you wait for that to drop here is Charlies review of the game and it sounds a whole lot of fun.

“The Queen trusts you, but no one else in the royal court does. Why?”

I am inevitable. A royal killer, and our people cannot have loose ends. Our nobles fight one another for a place at her court, and I have to put down the injured loser. The Queen cannot have loose ends, after all. The same goes for schemers she suspects, servants who misbehave. No one trusts me, because they know that for most people in court, I am their end. For her sake, I am their end.

For the Queen is a small tarot-style storytelling game. Everything is contained in one deck of cards which you unpack and learn as you start the game. A set of numbered cards tell you how you’re going to play the game and the moment you’re done with those instructions, you’re ready to go. 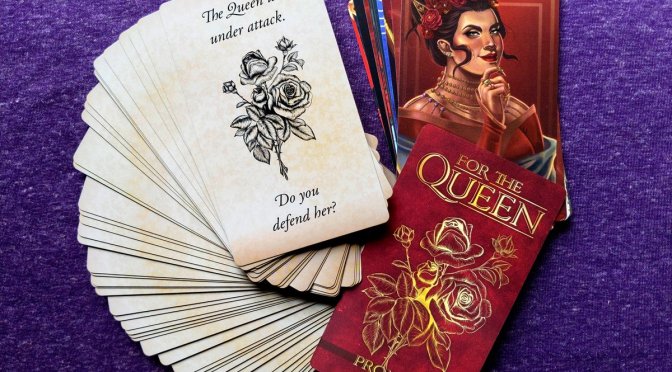 You have no character to begin with, no defined kingdom and no Queen save for one card picked from a selection of different paintings of queens.

The Prompt Deck makes up the entirety of the game, with one card saying, “The Queen is under attack. Do you defend her?” hidden somewhere from halfway down to two-thirds, depending on the length of the game you want. Starting with whoever wants to go first, a player turns over a card and answers the question. That’s it. Well, you can pass the question on if you’d rather someone else answer it or “X” the card from the game if you don’t want to have to answer it (e.g. we all know the answers and nothing new would be gained from answering). 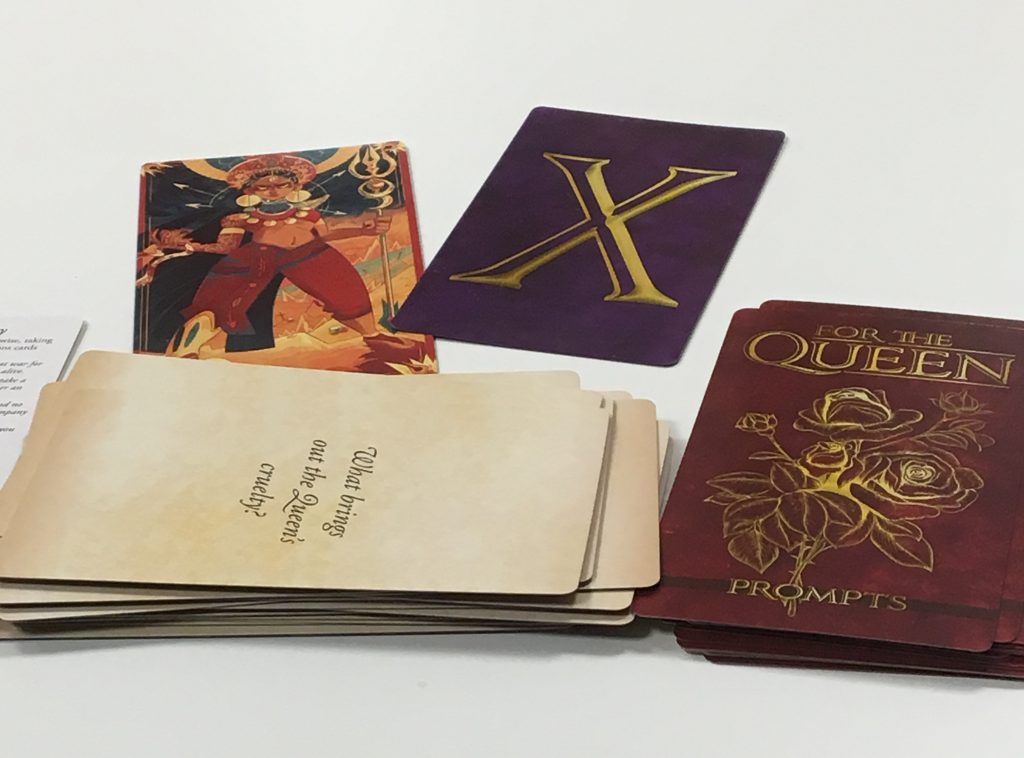 The questions themselves are a masterclass in world-building and character building. They feel so loaded and help bring out answers which could build you, the queen and the world all in one go.

“The Queen gave you a compliment, once. What was it, and why have her words stayed with you?”

I received that card. I’d already figured out that I murdered people for the Queen, that she’d had me kill my uncle who was a low-level dissident in the kingdom. I looked at the card, considered passing it over to Mark, whose character had even more of a love/hate relationship with the Queen, or I could have answered it by mentioning her complimenting me murdering someone. The thing is, that “once” is always the hook in the cards with these kinds of questions.

As a child, I was brought to the castle and put to work for the Queen. I didn’t want to go back where I’d been, so I resolved to do my best for the Queen. When she saw me, she told me that I had kind eyes. A small moment of mercy, of humanity between us. The questions ask us things which we answer back and forth in time, mainly on the road to a peace talk with the Queen and a hostile nation, or before. We never found out what changed with my character, or whether they still had those kind eyes despite hands soaked in blood. Outside of the questions, it didn’t matter, and between them we fill in the gaps subconsciously. 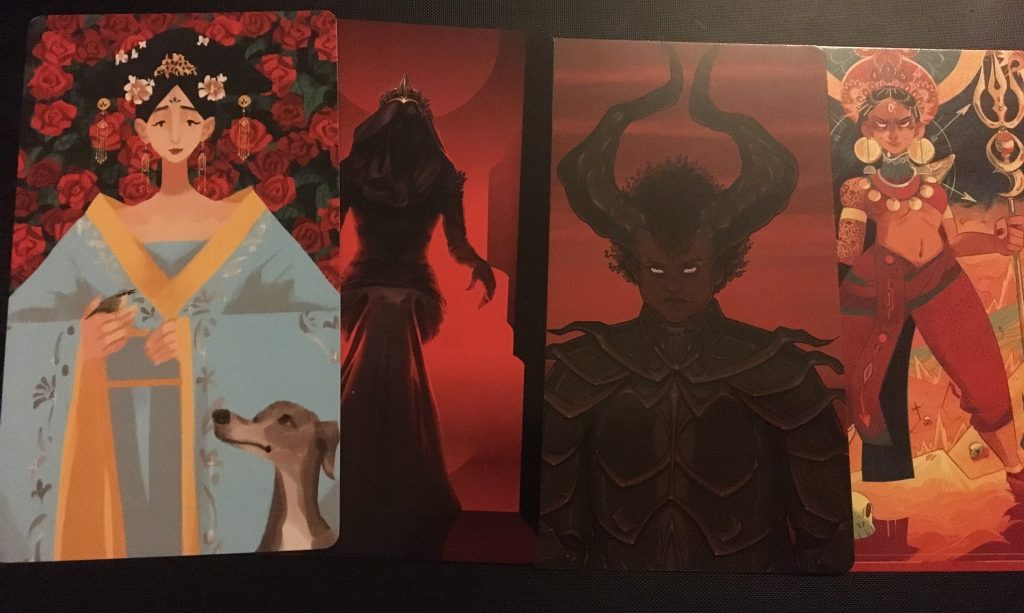 This is a game about relationships, especially the imbalance of power, status and love between you and the Queen. The mission statement to open each game is as follows: “The land you live in has been at was for as long as any of you have been alive. The Queen has decided to undertake a long and perilous journey to broker an alliance with a distant power. The Queen has chosen all of you, and no one else, to be her retinue, and accompany her on this journey. She chose you because she knows you love her.”

Again, the wording is beautiful and deliberate. I’ve heard a few actual play podcasts Alex Roberts has been on and her use of language, her slow, calm pacing and the choice of words she uses are fantastic. It shows here that this is a game she’s made.

The card-drawing is almost like The Quiet Year in the simplicity and the moments of pondering. Vinnie, from my group, mentioned the joy in seeing people’s faces as they read the card and start to think about what the question means. We started out flipping and reading them, then we held them close and only read them out if we took on the task of answering it ourselves, otherwise we’d pass it on to the next player. Often we’d ask what they make of the card, or that they may want to consider passing it on to the next player, or just laugh.

By the time you reach the end, you all have to answer whether you’ll defend the Queen when she’s attacked. Like so many questions, there are a lot of loaded statements here. Can you defend the Queen? Should you defend her? After everything you’ve gone through, can you bring yourself to keep her alive or let her die? It felt a little like the choices at the end of Witch: The Road to Lindisfarne, although with no player as the target of the attack. I admit in my first game I even had to slip in a, “though it means my death” to mirror that game.

The game will always tell the same story of the journey, but the Queen, the characters and the relationships developed will be different each time. This is a game which you can easily fit in a bag to play if you’ve got 30 minutes to two hours spare. It had the narrative game fans and the shyer players spellbound to the point where we had time to spare after the game, but instead of playing something else we needed a little time to decompress.

In my first game, I played an entertainer brought along to help with morale. Our queen was a warrior first, beautiful and terrifying. Our retinue included a punished resistance fighter who was smitten with her and the royal wizard who wanted to keep the secrets of necromancy away from her. She found them, though. We know this because she brought me back to life.

I knew early on that my character would probably die defending the Queen as he was no combatant. Still, now I knew something worse. I knew that he would die defending her, then she would bring him back and he would do it all over again, still chasing after her like a damn dog. 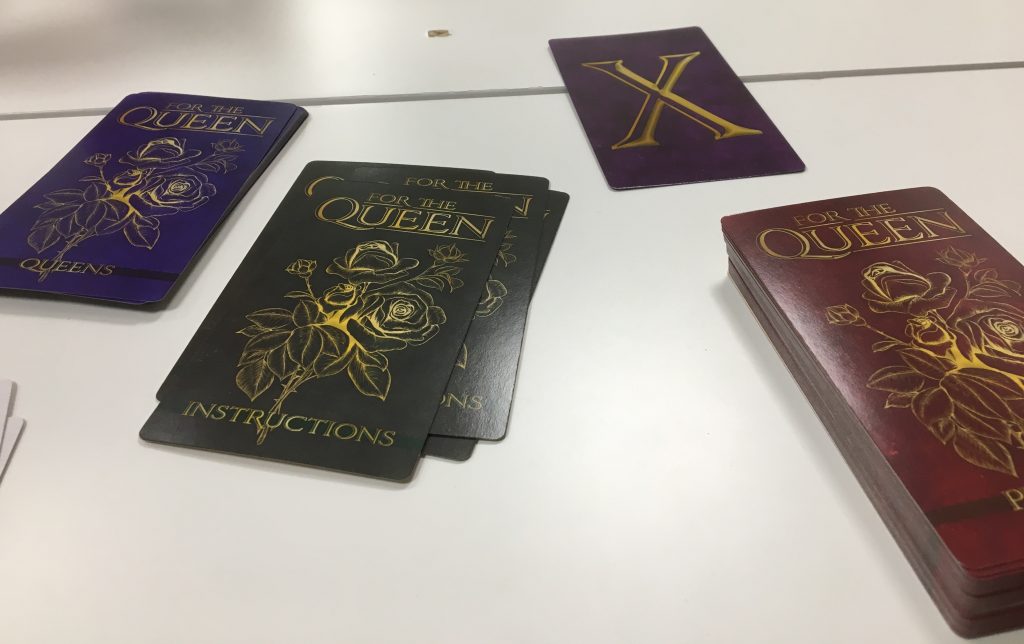 My second game was the one where I created the murderer. We went through the ritual of reading the instructions and started to play, which is when the enormity of my players’ buy in hit home. They had nothing, no character sheets, no name and no idea what they had to do until they asked the questions.

Vinnie started us off by being asked why he was the Queen’s favourite. He decided that he worried because people fought one another for a place on her council, but he was weak and worked for the role. He knew if they came for him, he would not be able to defend himself. His character was from another nation and considered a heretic for not earning his place as a diplomat. He caught the Queen having a fit, saved her life and never told anyone of her moment of weakness.

Lee was asked why the Queen lights a fire in him. Later he would decide his character was in love with her, but for this first choice, he said that she inspires hope that the war is right and just, that it can actually be won. He arranged for people to ambush our group in the hope that if the Queen was thought to be dead and they could safely away from the war. The Queen, of course, was not aware of this plan. 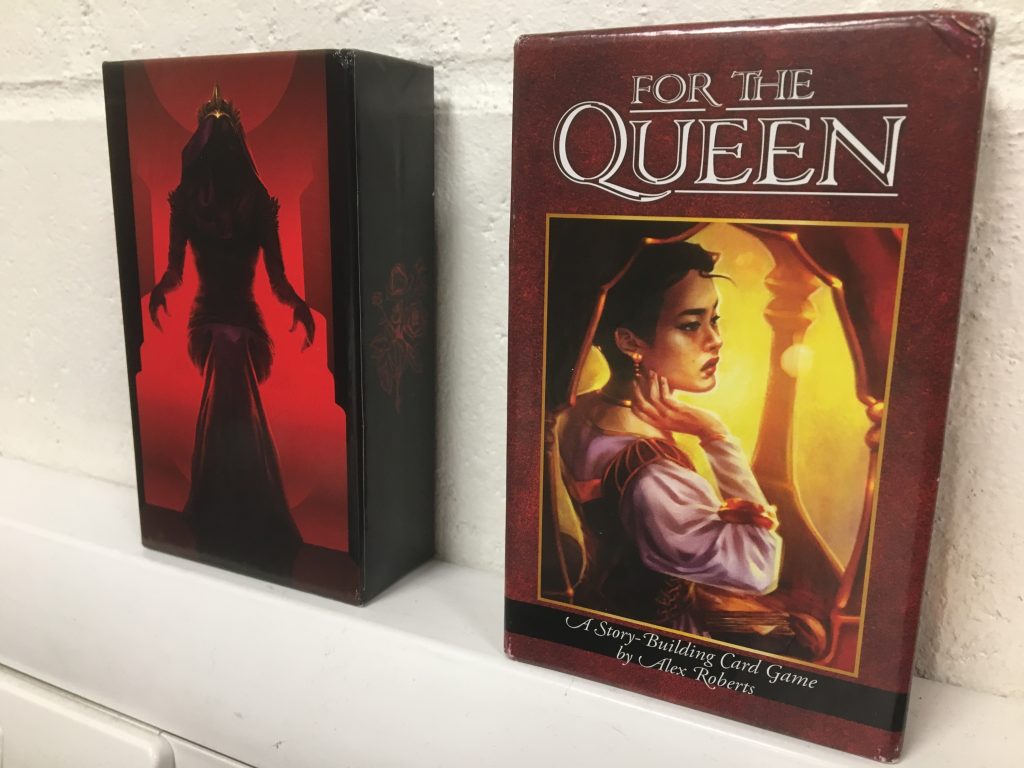 I was asked about the Queen’s status and how she reminds us of this, so I mentioned that she must always be taller than other people, sat on several cushions or even stood on a stool to be higher up than anyone else. It would be the next time round that I would be asked what I do which pleases the Queen and I said ‘murder people’. I carried out some brutal tasks on the journey, watching the farms passing and lamenting that I had to leave there when my family travelled to the Kingdom.

Mark was asked about someone his character loved who the Queen was responsible for the death of. His character’s partner was a soldier sent into a suicide mission by the Queen. Later we would see the progress of this character, from the one time the Queen touched the character, by wiping a tear from their eye after delivering the bad news. We found out that they were able to dispassionately give advice which would often be brutal, but after losing their lover they were faltering, which made them a risky companion on the mission.

When the end came, I was the only one to defend the Queen, but even then with a moment’s hesitation. The others hid from the fight, or fought despite being awful at it. Or stood back, assuming the attackers were the hired ambushers. The moment we were done, the game was over. The outcome didn’t matter, but our decisions did.

There’s a physical edition and a Roll20 edition for online play. It’s cheap and it will have you tell some fantastic stories about love and duty. You can check where they can be bought by visiting Evil Hat’s website, here.

0 likes
Reviews, RPG
For The Queen