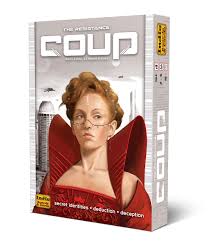 Portable and easy to explain.
Lots of bluffing & deduction.
Games are quick.

This is a whole lot of fun. Its very portable and easy to explain and is a great filler to take along to a pub or games night. Features a lot of bluffing so if you're a terrible liar or not a fan of that style of game its probably best to avoid. For the rest of us, I've got an Ambassador?

Coup premiered at Essen 2012. Designed by Rikki Tahta it went on to be a huge success and pretty soon unfortunately went out of print. 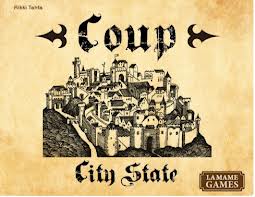 Skip forward to early 2013 and Indie Board & Cards announced that they had picked up the rights to a re-theme and re-print setting it in their Resistance universe, a sort of cyberpunk dystopian future world deal. Having played this fiendish little game and loving it, but not owning a copy, I jumped at the opportunity to pick it up and backed the project.

So I’m now very excited to report that popping through my post box this morning was my pimped up Kickstarter exclusive version of this cool little game. 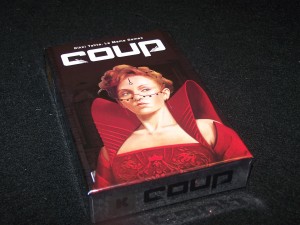 While Indie sensibly hasn’t messed with the rules; they have given this the Resistance makeover. Personally I liked the originals simple art style, and while this isn’t a slouch in the visuals department, I enjoyed the earlier version. 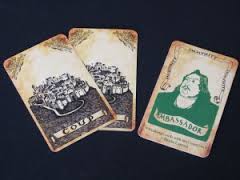 This is a bluffing and push your luck style of game, and if you have played Love Letter and enjoyed that then you should just go and pick this up right now. It’s also very quick to explain and set up and is ideal filler material. These sort of games are my home groups bread and butter and having dined out on many an evening of Love Letter, I know this will be a huge hit.

The base game uses just a deck of 15 cards made up of 3 each of the following types.

The Duke, Assassin, Captain, Ambassador, and Contessa. Each of these has specific powers that we’ll get to in a moment. To play you shuffle up and deal everyone two cards that are kept face down by the players (their influence). The remaining cards make up the Court deck.

You also get a set of summary cards with all the characters powers and actions you can perform. Helpful for the first couple of games as it’s hard to bluff if you can’t remember what the card you were pretending to have.
The idea is to win the game by eliminating the influence all the other players have over the court. You do this by removing their cards from play. But how you may ask do I do this? Well rather like poker by getting a tell on the other players and bluffing, a lot of bluffing.

Each turn you get an action, it can either be to take coins, the basic is one, but you can select to claim foreign aid and receive two. If at any point you have 7 or more coins in your hand you can stage a coup on a player of your choice and they instantly lose one influence. If you’re not doing any of that, then you can choose to use one of the characters actions, and this is when things get interesting.

You can choose to play it safe and pick one of the characters in you hand and play that action, or pretend you have a power that takes your fancy. Once you’ve announced your intentions, the other players decide whether they want to challenge or counteract that action.

The challenge is the most dangerous move because somebody is probably going to lose a card. When you issue a challenge, you select a player who has just made an action with a character and call them out as being a liar. They then have to prove that they have the card they said they did, by showing it.

If successful then the challenger loses one influence and must reveal one of their cards. Now they are in a tricky situation as you don’t get any more and must play on with their remaining card, this also paints a big bulls-eye on you for the others. The player who successfully repelled the challenge gets to replace their shown card from the Court deck.

And so it continues until everyone else is knocked out.

Right let’s take a look at these cards and what they do:

The Duke
He will allow you to take three coins from the Treasury.
And blocks foreign aid. (handy if somebody is starting to accumulate wealth)

The Assassin
Can assassinate one of the other players.
You pay three coins and pick a player. Unless they successfully block this move, they lose one influence.

It’s a dangerous card for players to bluff with, if caught out, they lose an influence for the failed bluff and then the assassin takes out their other card.

The Captain
Can steal two coins from another player.
And he also blocks any attempts to take from you, a very powerful card if you are building that wealth up for a coup attempt.

Ambassador
Can exchange cards with the court deck. Handy if somebody thinks they know what cards you are holding and make you a wild card at the table. And then you can lie about whatever you like.
He can also block a player attempting to steal from him.

As you can see all the actions are pretty easy, the fun comes from trying to work out what cards everyone else is holding and whether they are just a big fat liar. Remembering who did what in previous turns is essential. A Player, persistently bluffing and going unchallenged will eventually make the silly mistake of claiming a third card type they can’t realistically have unless the first two actions were both bluffs! It soon turns into a minefield with players bluffing a bluffing player. But once cards start to be flipped, and you can see what’s out of the deck then the tactics change gear and everyone has to play things very tight.

It’s marvellous fun, deceptively simple and a joy to play.

As I have the pimped out Kickstarter edition, it also came with an additional character card for mixing up games. And that’s the Inquisitor.

He has a couple of choices.

He can either exchange a card with the deck or look at one of his opponents cards and then choose whether he will force them to change it. I’d suggest leaving him out for your first few games. The opportunity to know what an opponent is holding does give you significant power over them.

Additionally he also blocks anyone with a captain attempting to steal from him. (If you play with him, he replaces the Ambassador)

If you’re a fan of these types of filler games, then this is a must buy. The retail version should be hitting pretty soon, be aware this is just the base game and is missing some of the extra cards found in the Kickstarter edition.

If you can hunt it down in addition to the inquisitor and the shiny coins you also get 12 additional cards, 2 each of the roles but with alternative art, these allow you to play with up to 10 players.

Whatever version you do get, this is still a very cool little game and I can’t recommend it highly enough.

Smoke & Mirrors
Be the first to comment!
Leave a reply »