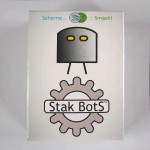 none that we know off.

This is a great little game. Easy to pick up and play and with the addition of the cute little robots its one the kids can join in on. We love how versatile this is with a heap of different ways to play. Love those little bots.

Stak Bots is a game I was very recently introduced to by none other than its creator Tom Norfolk. Whilst bumbling around at a game convention Ollie my eldest was rather taken by a large poster depicting the above little colorful and cutesy robots with the tag line “Battling Robots Card Game”. Being a eleven year old boy that was an easy sell, so after a small amount of arm twisting by him we went over for a demo.

Before sitting I will be honest to not being terribly enthused, at first glance the art looked simplistic and I already have a dozen or so card games, did I really need another. Tom gave us his demo, and then I bought the game.

Yeah so who’s a fool then, that’s me. Had I not sat down and given this a try I would have missed out on a brilliant strategic yet deceptively simple little card game. I loved this, this is the sort of filler game my group eats up. But it is more than that, you can play this all manner of different ways, in teams, with smaller or bigger decks, solo, you can make it real easy or really quite strategic, there a bunch variant rules included with this and more on the website. And that’s another of this game’s highlights its rugged enough to be tweaked and changed and it will keep on ticking over like a trusty little robotic companion. 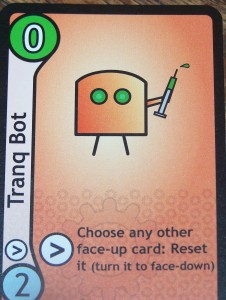 For a drug brandishing psycho, he really is quite cute.

Lets pause a second and I’ll give you a brief rundown of how this plays out.

Each player gets dealt a stack of nine cards, and two in your hand. You flip the top card of your stack and then you are ready to go.

On your turn you draw a card from the deck into your hand and then decide on what action you want to take. Whatever you do at the end of your turn when you are all done, you must have discarded a card into the trash pile.

You can attack either with the top card of your stack or from your hand, you have to make a decision of what and when as you can only do this once per turn. The green number at the top right of your card is both your attack power and energy. Once its depleted your Bot is scrapped, but its possible for a powerful bot to potentially go on a bit of a robotty rampage and tear through your opponents cards.

Play a card from your hand, you can keep doing this as long as you have cards.

Scrap the top card of your stack or one from your hand, again there are no limit to the times you can do this. However scrapping all the cards from your stack will eventually lose you the game, so not the best idea. 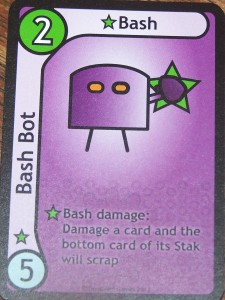 A key and cool little feature is that a great many of the Bots has a entry effect – this will be some power that immediately kicks in as soon as its played/or turns face up from your stack.

These can be great giving you extra cards or moving your opponents cards around his stack or terrible in the case of the stupid stupid clumsy bot who scraps your own cards. I love this feature and its possible for you to chain multiple events that can decimate an opponent or quite possibly screw up your plans.

Once either yours or your opponents stack is depleted its game over. And then have another go.

I like card games and play many at home and in my gaming groups and this slots in nicely in either, and at the silly cheap price this is a no brainer. I personally need to get another set as my original’s have been borrowed by Ollie to take into school and play at lunch times. 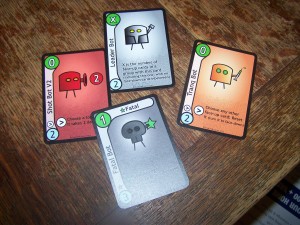 So to recap if you have any Robot loving kids at home or you yourself have a soft spot for cute little bots beating the oily snot from each other than go and grab this. You can also have the satisfaction of supporting some good old British ingenuity.

Still not convinced than more fool you. OK do you have an iphone? if so then download the app. It’s free and includes the full game and you can find it below. I’ve been having lots of fun with this and recommend giving it a shot.

Stak Bots – Red Expansion
Be the first to comment!
Leave a reply »