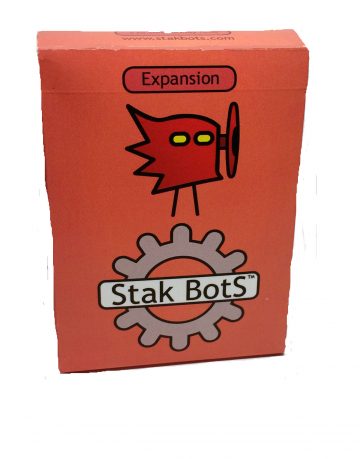 This is so simple to learn yet has oodles of cheeky fun buried beneath its many layers and for basically the cost of the change in your pocket its a steal.

Stak Bots has been a part of the WDR furniture since I first started writing reviews, it’s grown up with us and is still the filler of choice for Son No.1. Not that he’d admit that in public these days, being a teenager he’s far more interested in that poster of Katie Perry, oh dear. But I digress. 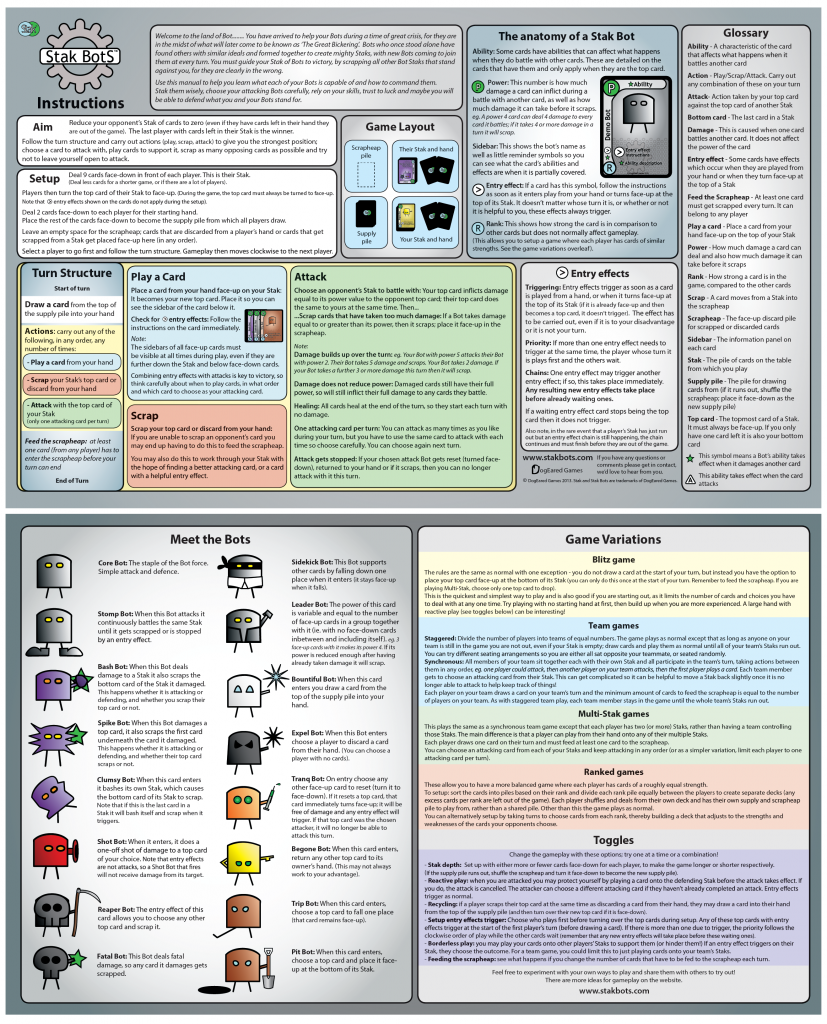 If you’re new to the Stak Bot family, then let me give you a brief overview. Players each have a Stak of their Bots and at the start of a turn draw a new card then they can take the following actions as often or few times as they wish, in any order they want. You can attack other Bots with the one atop your stack, but you may only perform this turn’s attacks with that one Bot. You can play a card from your hand to your stack that will usually activate some devilish ability, or you might just want to replace your top Bot with something bigger and scarier, and finally scrap the top card from your stak or one from your hand. At the end of a turn if you haven’t yet scrapped a Bot either voluntarily or via combat then you have to discard one now.

That’s it, its very easy, very simple. It appeals to kids big and small, and the simple illustration of the bots adds to its not insignificant charms. If you should ever tire of the core game then there’s a heap of tweaks and rules variations via the Stak Bots website, all of this goes to making this a clever little sod offering a lot of fun and replayability out of one tiny box of cards.

So this Red Expansion as per the previous Yellow Edition provides us with a fresh batch of maladjusted and mildly psychotic bots to add to our collections. Like Yellow, it can be played on its own or mixed with the other sets. We get the return of a few old favourites like the Shot Bot but now in his new 2.0 iteration with spiked weaponry and a few distinct tweaks on tried and tested prior bots.
But what we really want are the new additions to the roster, and this is no slouch it that department. This set does seem to have more bite to it, not least the Shark Bot that yums it’s way through any wounded little Bots holding on for dear life, or the Pulse Bot that’s the equivalent of an EMP blast taking out any unwieldy big bad bots. The Boba Fett of the Bot world Bounty Bot, who looks a bit like Mr. Bump from the Mr. Men books and his card drawing abilities or finally Nice Bot, who’ll give your opponent cards in some suicidal act of kindness.

Kudos to the Designer Tom Norfolk as again there’s a bunch of cool little tweaks to the original game, managing to keep things fresh while not reinventing the wheel. If you’re new to the Stak Bot world, I’d suggest starting with the original base set as while these new additions don’t overly complicate things I think that set plays better for the beginner being a gentler introduction to the game.

however if you’re a veteran of these conflicts and have encountered the worst of what these little tin bastards have to offer then prepare yourself for more mirthful mayhem.

Now I was lucky to get a sneak peek reviewer copy of this deck, and I’m not sure when we can expect this new batch to be unleashed upon the unsuspecting masses. If this has piqued your interest, then head over to Stak Bots.com where you can pick yourself up a set for a very reasonable price and get battling.