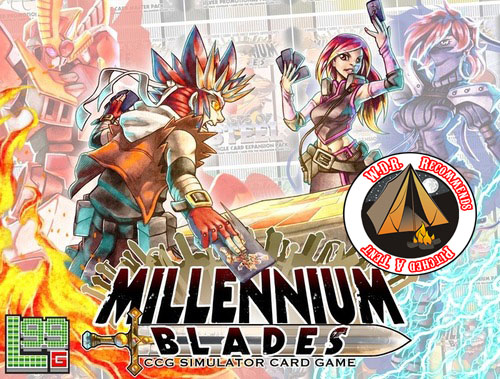 It does everything it promises and so much more.
Just oodles and oodles of replay-ability.

Some assembly required.
Putting all that money together hoo boy! that's no fun. Maybe arrange a group craft session.
The build and tear down can be a bear if you'll going to change out the store deck every time you play.
It has a pretty steep learning curve and you need to be thinking on your toes the entire game, anyone looking for a leisurely card game should probably go play Dominion.

This is an incredible accomplishment. If you've hung up your deck box but yearn for those bygone days of carefree youth and expendable income well now you can relive your former TCG glories, feel the buzz of buying boosters the thrill of the clash of a tournament and all without rupturing your bank balance. This is unequivocally bloody fantastic.

Millennium Blades, when described, sounds like a game about to perform the most extravagant Shark Jumping ever. It’s a card game that seeks to simulate the length and breadth of Trading Card Games (henceforth referred to as TCG) ala Magic The Gathering complete with the buying of boosters building of decks and the tournament scene with its fluctuating strategies and meta. And not only that but to abstract all of that into an evening’s entertainment?? You’d be correct in thinking this is bonkers an impossible task, and that’s before you wrap your head around the fact that you’re playing a card game simulating playing a fictionalised trading card game how very meta. Or as Keanu Reeves put it in the Matrix Whoah! 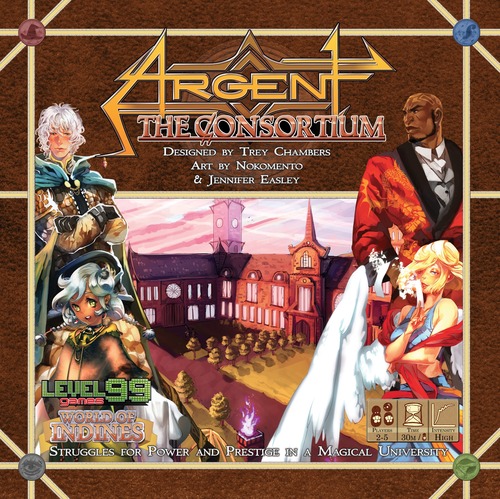 Level 99 are already established as a publisher not afeared of offering up huge boxes bursting with insanely crazy ideas that somehow still manage to work. Argent the Consortium is one such their game of wizarding schools and building your power base to take over as the new Arch Chancellor a sort of Dumbledore simulator if you will. It’s been a solid sleeper hit much like a Coen brothers movie a smart minority get it from the off, and it’s just waiting for everyone else to catch up to how cool it is. And while that was no slouch when it came to the possibilities of what could be achieved with a box bulging with cards and pieces, and it was a box very full of those Millennium Blades seeks to school us again in a whole new way. 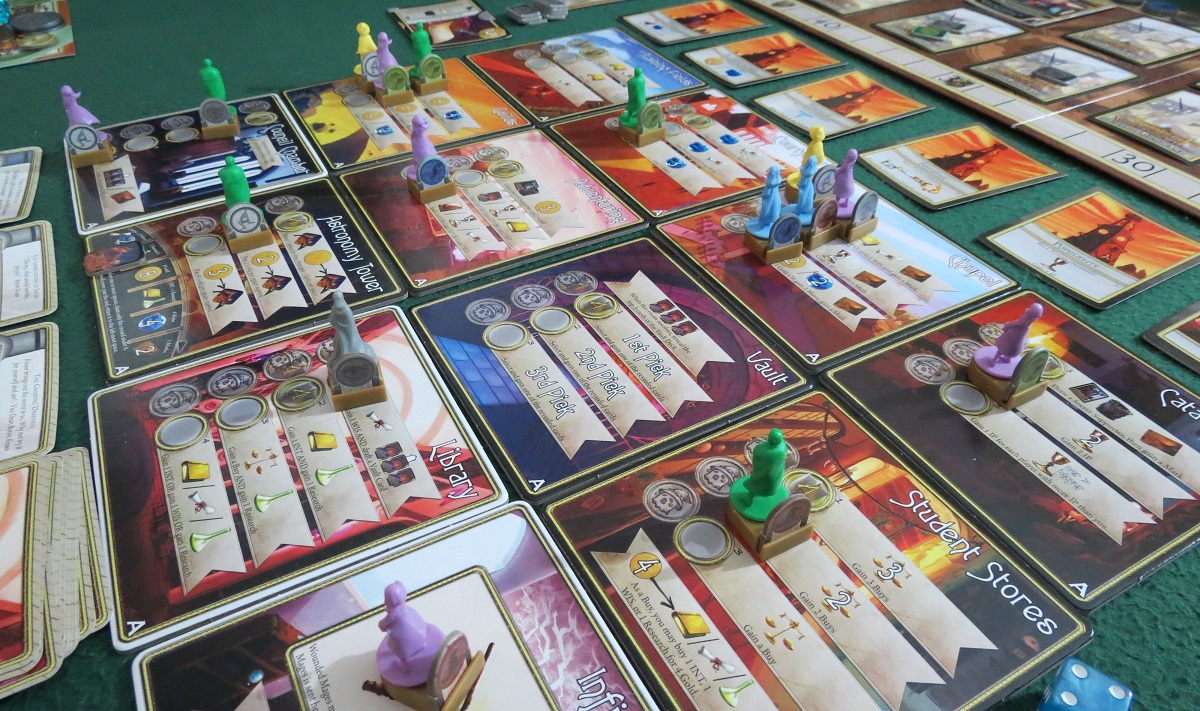 I won’t tease you anymore, put simply it has to be said the crazy fools have only gone and done it. It shouldn’t work, it really shouldn’t, but it does like gangbusters.

In this immense box of cards and there really are literally hundreds in here, at the end of a session you will have experienced the entirety of a TCG’s life cycle concisely and majestically diluted into two hours. And as you push back your chair from the table your head swimming with the crazy goodness that you’ve just experienced, you’re left with but one defining thought, I really want to do that again. 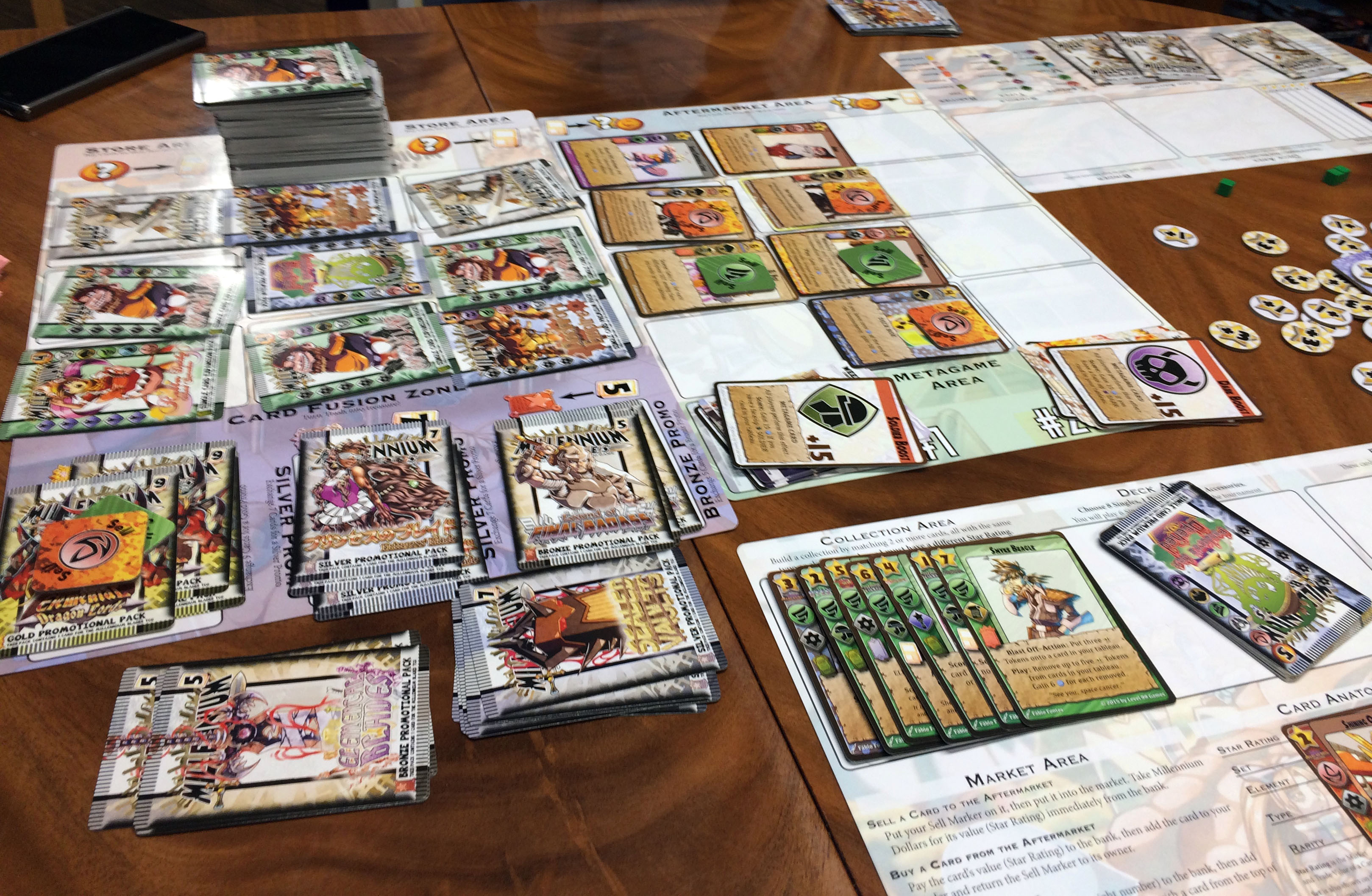 A game plays out over three tournaments, sandwiched between these are real time sessions of deck building, set collecting trading and selling. Besides the multitude of cards and illustrations each representing numerous sets and collections, there is also one of the greatest gaming components of modern times great big wads of cash to spend. These cash stacks thematically link beautifully to the idea of what you’re doing, and it becomes an addiction to be blowing huge wads on rare and super rare cards or just buying armfuls of boosters hoping that you’ll discover that one card that works in tandem with the deck you’re constructing. It’s like I’m that teenager again in the comic store for the first time tearing open foil packs hoping, praying like Charlie Bucket to find that super rare golden ticket. But I’m getting ahead of myself.

Everyone gets a starter deck, it includes a deck box (of course) one accessory and eight single cards that to anyone familiar with TCG’s or deck builders work together in simple but effective synergies. As a starter game, it’s suggested, and I strongly agree that players play these decks to understand how the tournament works and also get a feel for how those cards play. It is from this humble beginning you can adapt your strategy and build on this to engineer bigger and better combinations for the next tournament not forgetting the cards your opponents played and working on a strategy to immobilize their scores. 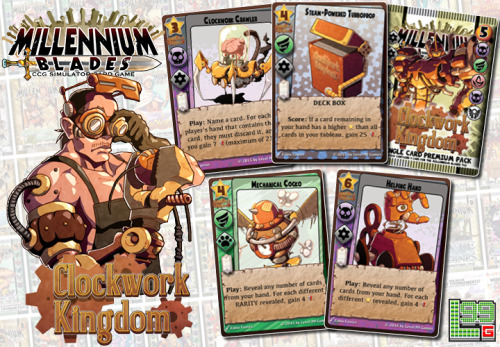 The tournament is abstracted down to playing six of your eight cards that will either include SCORE options that offer points or multipliers at the end of the tourney dependent on the Types/Elements remaining face up in your tableau. There are also ACTION cards that will allow you to FLIP your cards for points or to activate further combos or other ways of manipulating your score or your opponents. Or you can CLASH a simple mechanic that involves comparing the points values of the two battling cards, with again some cards adding points for winners or losers. It’s not incredibly deep but when combined with the sheer variety of different combinations and builds offered by the vast number of cards available still manages to be massively satisfying. 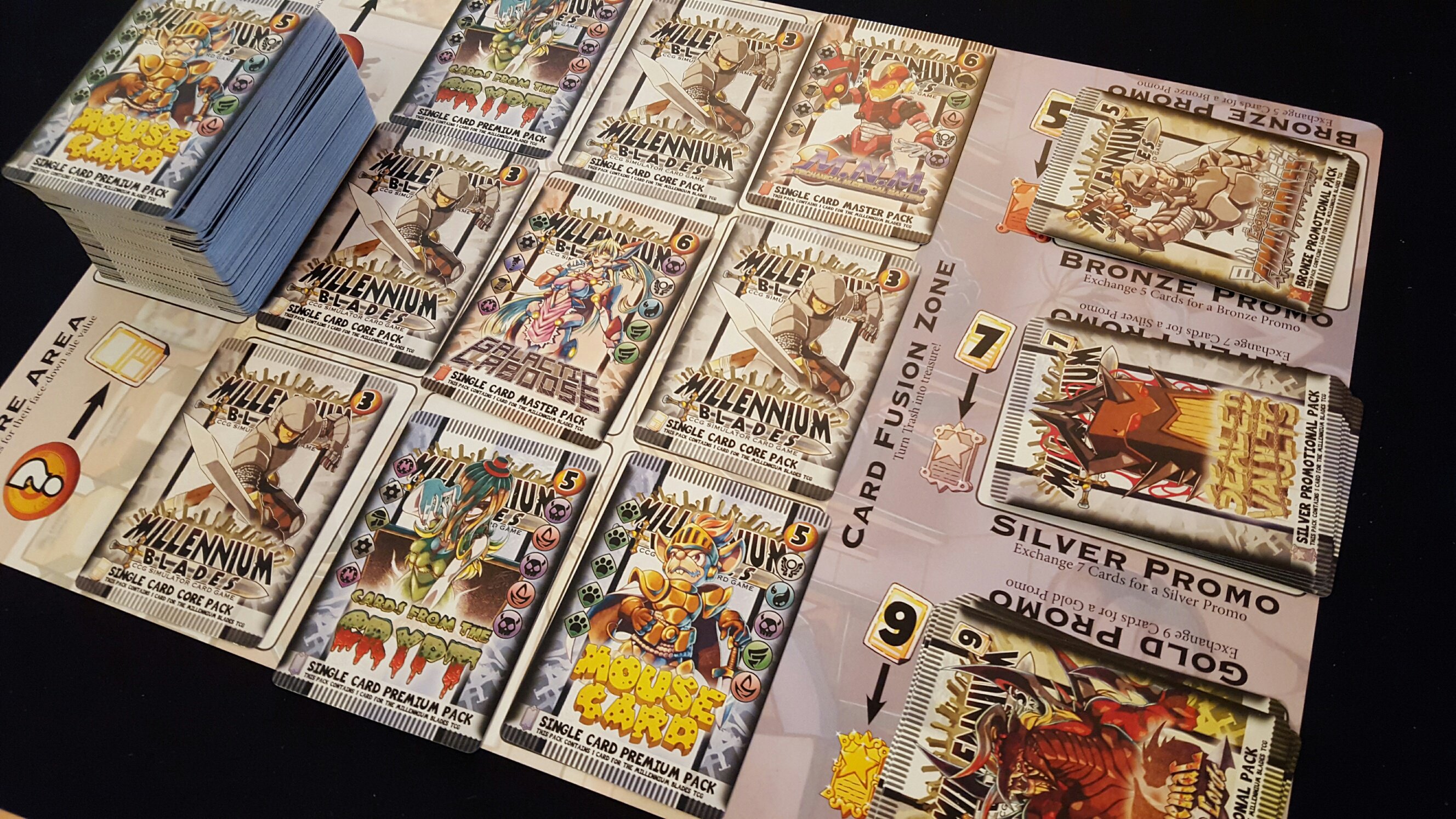 And as much fun as these tournaments are the timed stages are where the magic and happy embolisms happen. The deck building phase is split into three timed intervals the first two are each 7 minutes in length at the beginning of these you get 6 cards for free, and then the timer starts, and you are free to buy boosters trade cards, build your decks and collections. During the first and second intervals, a meta card is revealed for additional bonus points available for you having a particular card type in your deck. The final 6 minutes period is used for everyone to try and get their house in order sort out the cards decide what’s going in the collection whats going on the deck. Before we jump back into the next tournament, you score your collection which is based on all the cards having a connecting element it’s a great way to offload any excess cards you’ve collected during the turn but also offers some serious points and is ignored at your peril. And then the player board is flipped, and the battle commences. 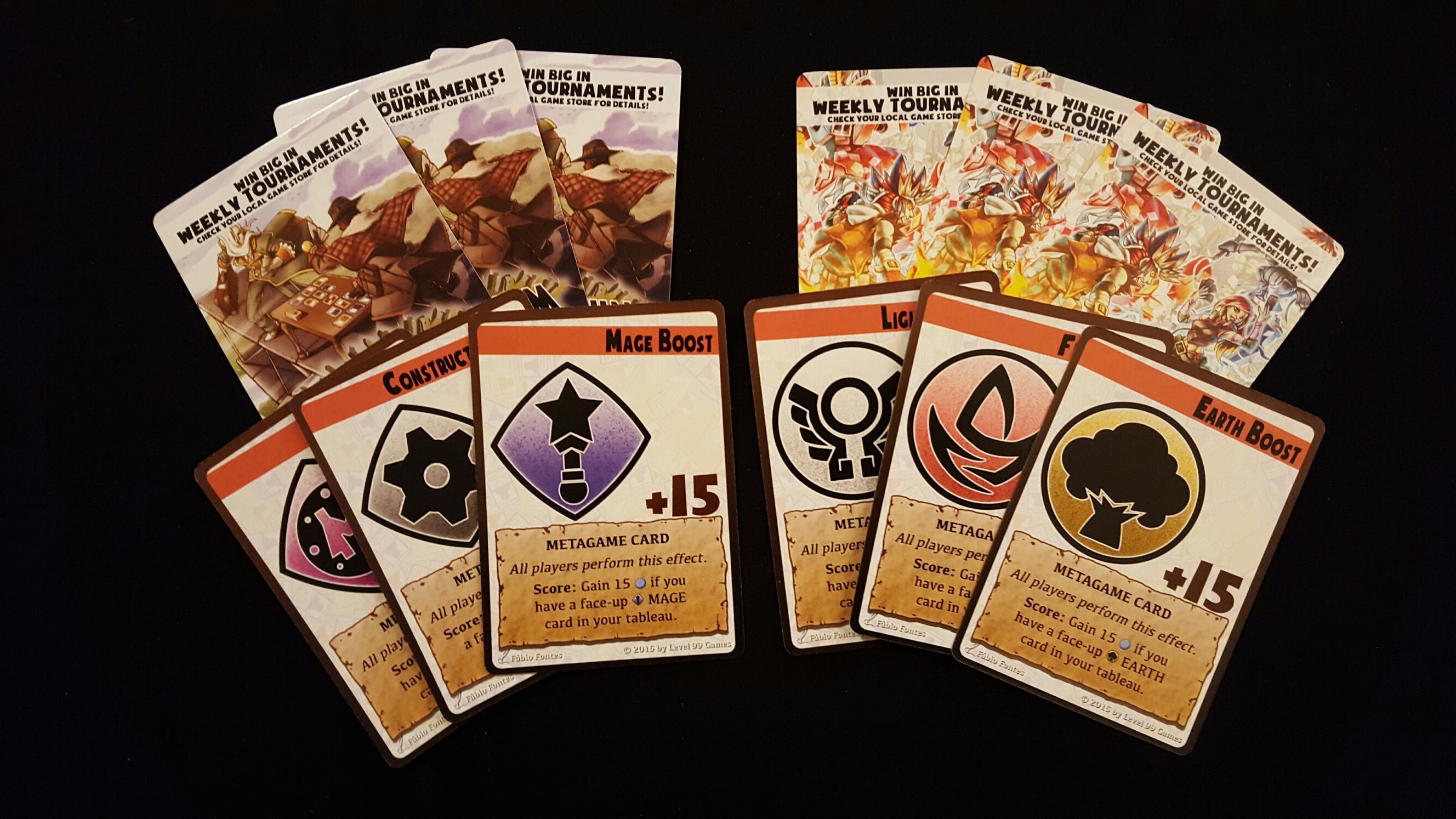 The first round of this game and for some, the entire first play is a mind melting experience as you try to juggle improving your deck and wrapping your brain around just everything that is happening. The rules flat out tell you-you can’t do it all pick your battles, it’s an excellent piece of advice, any control freaks need not apply you’ll lose your mind trying to accomplish everything against the clock. Some have stated this is a heavy economic game, and while the spending and recouping of cash scouring the aftermarkets and emptying the store are certainly a massive chunk of what you’re doing it’s all leading you to build that perfect deck. You cannot underestimate the tournaments the points available for winning are essential to victory, so yeah the spending of your money and making every dollar count is a factor but don’t be deceived into thinking it’s all the game it’s not. 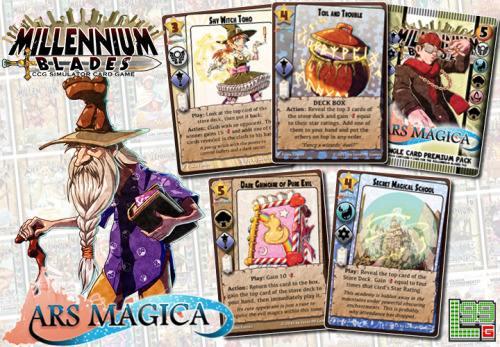 So who is this for? Anyone with a TCG or LCG background are going to eat this up and will comfortably slip into the strategies and style of the game like it’s a pair of warm slippers. It might be a harder sell for those not accustomed to the scene although I’ve played with pals who’ve never picked up a collectable game in their lives and they enjoyed it for the deck building element and challenge of the tournament play.

You get an enormous amount of value in this box, aside from the 6 starter decks and the 118 card core deck an additional 29 sets allow for multiple store configurations. Then there are the player powers, pro player powers, rule’s variants for the buying and selling of cards, super powerful accessories and even the opportunity to play each tournament at different venues with separate rules and effects. There’s an exhaustive amount of content in this box you could literally play this for years before ever experiencing everything. 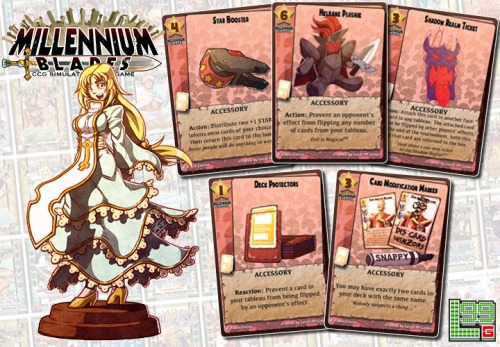 If this is going to fall flat it’s going to be players who haven’t experienced TCG play, it can for the first time be an intimidating experience, and I know some players who absolutely cannot cope with the pressure of real time play. The rules are fast and loose with how long you give to these sections, however, it’s more to stop games rolling for hours than anything else. If you don’t pre-build the store decks before a game then you’re looking at a healthy amount of time shuffling those cards, my advice is to choose ahead of time and keep the same deck for a few games before you think about mixing things up. And those lovely bundles of cash, yeah set aside a couple of hours to wrap all of that together before you can play, but then that’s why God invented Netflix right? 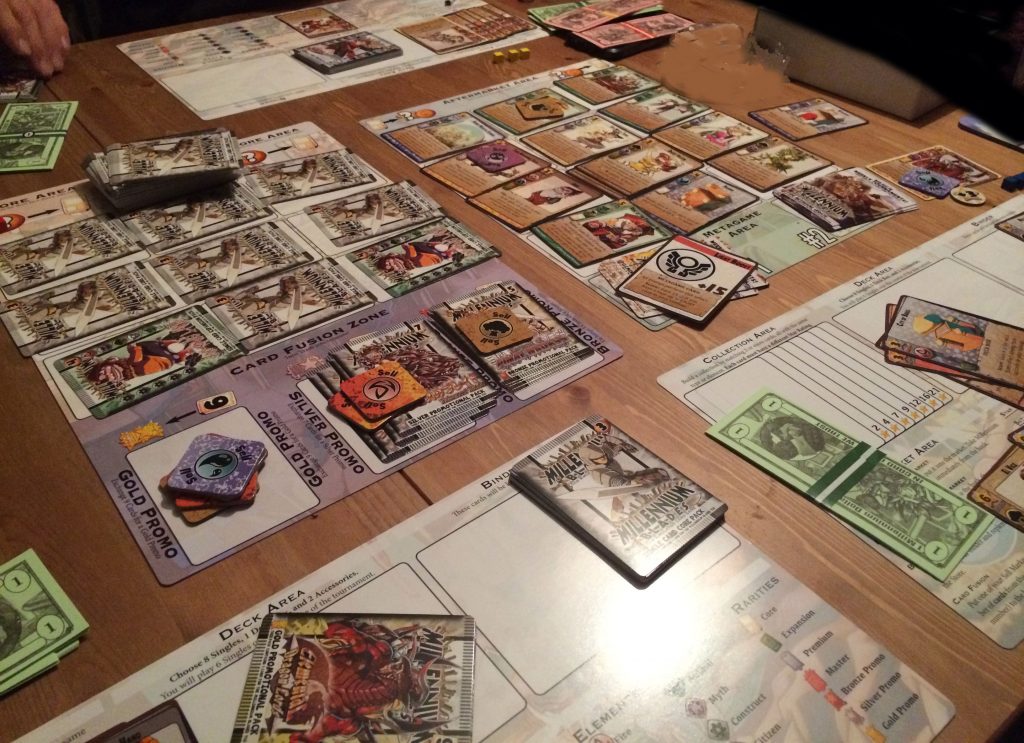 If you’ve ever enjoyed the buzz of opening foil packets, collecting sets, trading cards with friends or playing in a competitive card game then this is a direct line back to the soul of that 12-year-old in all of us geeks, it’s ridiculously wild fun the work of a deranged genius. The fact that not only does it accomplish all it set out to do but does so in the most infectiously enjoyable way makes this a contender for me of my game of the year 2016.