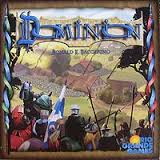 The one that started it all. This is still a solid game and one I return to often. Thematically its left wanting, but if you are in the market for an entry into Deck Builders this is still a game worthy of your time. There is better out there now but Dominion can still hold its own.

Friends we are travelling back to the golden hued times of bygone gaming, well five years anyway.

Released in 2008 Dominion ushered the hugely popular Deck Building mechanic onto the face of modern board gaming, and has since spawned numerous imitators some brilliant and others not so. Its easy to forget now quite what a huge shake up this game caused when it first hit. Previously this style of card game had been entirely the domain of Magic The Gathering, Pokemon and their ilk of CCG (Collectible Card Games) that involved you buying a base set of cards and then further booster packs to pimp your decks for playing against opponents (fun but not cheap).

Dominion came at this with one of those Duh! moments which now seems so obvious its amazing that nobody had thought of it before, it took the whole idea of a CCG game and then stuck it all in one box. It also did something else very clever, it reversed the deck building process and made that which was usually a solo pastime spent by obsessive CCG collectors refining their decks, into the game itself.

Dominion is relatively simple to learn, teach and play. The numerous cards, how they interact with each other and your opponents decks is what adds the strategy and complexity to the game.

Now if all this is cooking your noodle and you’ve never played a CCG before and the only card games you’ve played have been snap or UNO then fear not, if you can play them you can play this. This is a fantastic game and a great jumping on point to this genre.

The theme that is loosely hung onto the game is of battles in medieval times as you try and amass the most gold and power in your kingdom. To be honest its pretty throw away, this is all about the cards and how you play them, not some epic immersive experience, and frankly the cards and their powers are where the fun’s at. If you are looking for something with more of a story then there are theme heavy deck builders out there, Marvel Legendary and Thunderstone come to mind and I’ll cover them in separate reviews.

So whats in the box, well included in this base set are 500 cards. They break down into four basic types, Treasure cards, Victory cards, Curse cards and Kingdom cards. Each has a specific use and are all played differently. Take my hand and we will saunter gently among them for a closer look. 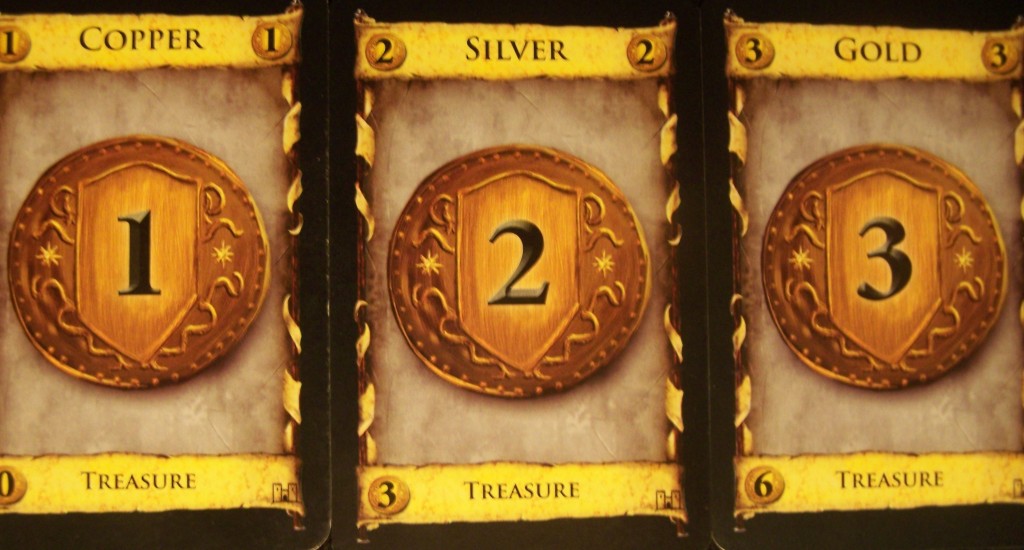 These come in three flavors Copper, Silver and Gold. Each is worth a different value and they are used as the currency in the game. 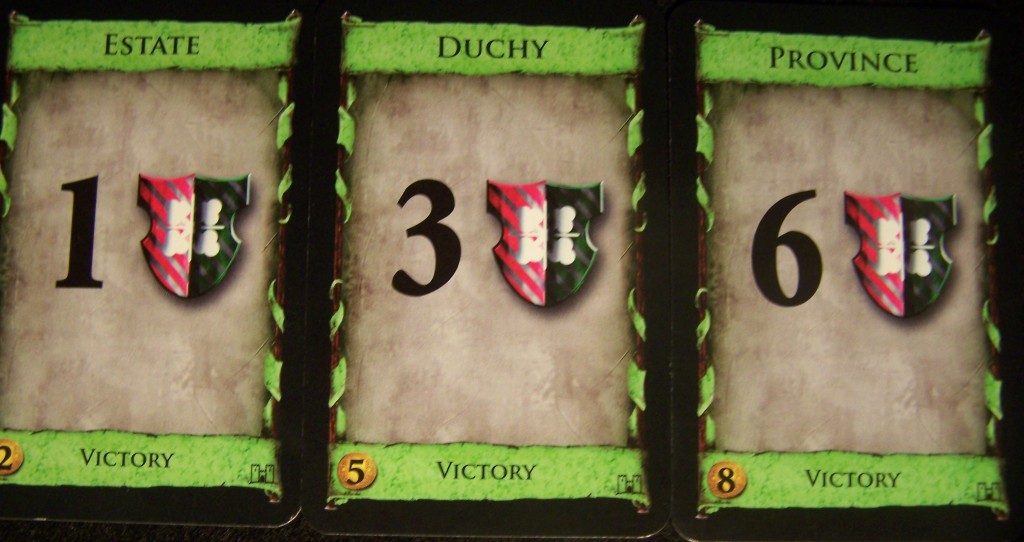 There are also three of these Estates are worth 1 VP, Duchy 5 VP and Province 6 VP. These are how you will win the game. The player with the most combined VP cards in their deck at the end of the game is the winner, the fun comes upon balancing when to start cluttering you deck up with these. 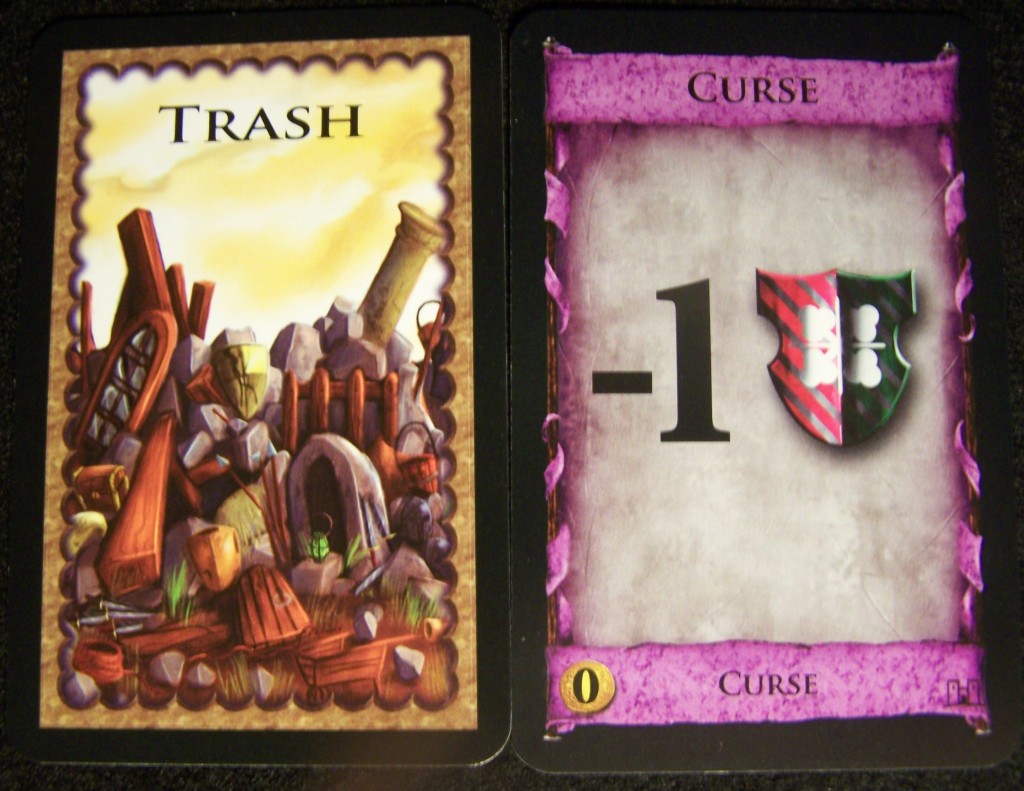 These apply a -1 VP in the end game resolution, so you really don’t want too many of these in your decks. They usually get there from the actions on specific Kingdom cards.

These are the meat of the game and will make up the bulk of a players deck. They have various effects and resolutions. Some are used to attack whilst others will defend or give you additional powers. 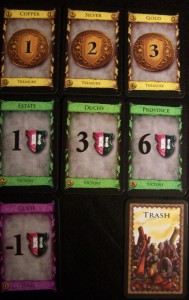 The three stacks of Treasure cards are laid out, the Victory cards below them. A stack of Curse cards and a Trash card goes down for when you trash any cards.

Then the fun bit, 10 separate stacks of Kingdom cards are selected. The instructions come with suggestions for your first couple of games. There is also a set of randomizer cards, each is a duplicate of the Kingdom cards and you can either take turns choosing or shuffle up and deal them out to give you a random starting set of cards.

Everyone starts with a identical deck of 10 cards, 7 copper and 3 Estates. You take your deck give it a shuffle and deal yourself a hand of five cards. The first couple of hands are going to be pretty simple. At this point the Estates are just chaff filling up your deck, but the coins you can spend to buy different cards.

These two are some of the carnage that you can come to expect during a game. The Militia is an action and attack , it gives you two coins to your money bag that turn, but also more interestingly it will cause all the other players to discard down to 3 cards in their hand. And that can put a serious crimp in someones turn.

This card and the other attacks can be countered by the Moat card, if its in your hand. If you are playing against an opponent who is stacking their deck with Militia cards, you best defense is a moat, lots of moats.

Every card has a value printed in its bottom left corner. That’s how much it will cost you to buy it.

On your turn you have two options – 1 Play an action. If you have any action cards in your hand you can play one. Dependent on that cards effect you may gain more cards from your deck, get extra actions, gain money. Once you’ve played all your actions you can then buy something. Unless a Kingdom card has modified your options you get one buy. You can get more money, Victory cards or buy more Kingdom cards. Its entirely up to you as you choose what cards to add to your deck.

And that’s the game. The tactics come from what cards you are putting in your deck, and what type your opponents are stuffing into theirs. Certain cards work well with others and when you hit a hand of great cards you can string together some very cool combo’s. 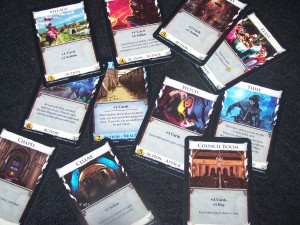 If that all still isn’t clear than fear not. Dominion is online and free.

You get the base set for free and for a reasonable price you can pick up the expansions. There’s a Solo game and multiplayer. This is really good for getting a feel for the different cards and strategy.

Dominion is still a very good game, yeah its not got that great a story hook and the art on the cards is all over the place. But that core game and how it plays is just brilliant. This is a good gateway into the hobby if you’re in a group who predominately play card games and should sit in the collection of any serious tabletop gamer.

Fear and Loathing in Birmingham
Be the first to comment!
Leave a reply »