Fear and Loathing in Birmingham 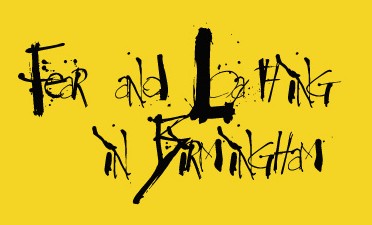 In an attempt to increase our coverage of the UK Games EXPO we went outside our normal channels employing an alleged professional journalist, foresight is a great thing and his credentials seemed genuine at the time. This report was pieced together from audio recordings most of which were indecipherable and may have included some form of ritualistic sacrifice, the rest comes from a series of disjointed emails that at best the content can be described as bizarre.

We were somewhere on the edge of Banbury when the dice began to roll. I remember saying something like “What’s that rattling…” And suddenly there was a terrible roar as dozens of hexagon, tetrahedron and icosahedron acrylic beasts came swooping and scattering across the footwell of the car, which was travelling about a hundred miles an hour with the windows down to Birmingham. I stamped about the pedals insanely concerned that one of these rotten little cubes would become lodged beneath the brake.

My attorney had unbuttoned his shirt and was gulping Mountain Dew to facilitate the navigation process. “What the hell are you yelling about?” he muttered, pouring over the crumpled remains of a service station tourist guide of Birmingham, he was eyeing Cadbury World with a greedy leer from beneath his Primark wraparound sunglasses. “Never mind,” I said “It’s your turn to drive.” I made a silent prayer to whatever elder gods where riding shotgun that day and jammed a foot onto the brakes and aimed for the hard shoulder. No point mentioning those dice, I thought. The poor bastard will see them soon enough.

It was almost noon and we still had more than forty miles to go. It was only going to get tougher. The energy drinks were almost out and we’d lost the M&M’s among a baggy of meeples. But there was no going back, and no time to rest. We would have to ride it out. Press registration for the UK Games EXPO was already underway, and we had to get there to claim our suite. A trendy gaming website had taken care of the reservations… and I was after all, a professional journalist; so i had an obligation to cover the story for good or ill.

The editor had also given me £300 in cash, most of which was already spent on a extremely random choice of games. The trunk of the car looked like a mobile spiel event. We had two decks of Netrunner, seventy-five assorted dice the aforementioned bag that had split and nearly caused my carwreck, five RPG source books, a copy of Twilight Imperium, and a whole multiverse of euros, ameritrash and deck builders… And also a crate of energy drinks, a packet of super noodles and two dozen mars bars. Not that we needed all that for the trip, but once you get locked into a serious game collection, the tendency is to push it as far as you can.

The only thing that really worried me were the Euro’s. There is nothing in the world more helpless and irresponsible than a man in the depths of a Euro binge. My head swam at the tossed point salad of Feld as it needled at me from beneath a soggy mars bar, we’d get into that rotten stuff pretty soon.

My attorney leered over the collection swaying and gibbering like a twelve year old at a Pokemon launch. “As your attorney, I advise that we stop here and crack open the Zombie Dice.” I shook my head. “Its absolutely imperative we get to the hotel before the deadline, or we might have to pay for lunch.” He rummaged around in the boot and snatched a Euro and lurched back to the passenger seat.

The CD player was yodeling  out a wail of Howard Shores Lord of the rings soundtrack, it had seemed right that we would begin our journey in the spirit of the  fellowship on its blighted journey towards mount doom. A gummi bear had attached itself to the disk jamming it inside the player, it had been on loop for the last three hours and the cracks were beginning to show. My attorney was now fumbling with the Feld, the box top slipped from his clumsy fingers and he was sprayed with wooden cubes. Screaming and grabbing at the air, as a rainbow of components blew up and out across the grey motorway. “Oh, Jesus!” he moaned. “Did you see what God just did to us?”

“God didn’t do that!” I shouted “You did it. Your a undercover Monopoly apologist! I was on to your stinking act from the start, you pig!” Suddenly he was waving a fat pringles dusted finger in my face. “You better be careful, what do you think their do if they find your My Little Pony CCG collection.”

“You whore,” I said “When we get to Birmigham I’ll have you chopped into Meeples. How long do we have?” He checked his watch a cheap gold knock off that had left a green halo around his wrist. “Thirty minutes,” he replied “As your attorney I advise you to drive at top speed.”

Birmigham was just up ahead. I could see the NEC looming up out of the smog and smeared grey of the sky. Thirty minutes. It was going to be very close. The objective was the Metropole Hotel, nestled up against the NEC like some mewling siamese twin, the neon glow of the Monarch suite drawing us in like the dull light of a mutant angler fish waiting to strike. When we finally arrived my attorney was unable to cope with the registration procedure, his mind addled by the journey and the cocktail of stimulants coursing through our bodies. We were forced to stand in line with the others which proved to be extremely challenging. Surrounded by cosplayers and an over-abundance of longhairs was this some terrible alternative reality where woodstock never ended rolling on from one debauched event to the next. I felt my grip on things unravel, mixing with the heady rush of caffeine and sugar overloading my already fragile state I slipped into a deep and twisted fever dream.

There is no way to explain the exquisite terror I felt when finally at the desk I lunged at the bemused clerk babbling. “Hi there,” I said “My name is… ah, Jefferson Owl…, on the list. Free lunch? I have my attorney with me. The clerk attempted to hand me my pass and in my agitated state I slumped over the table scrabbling limply as I was buried in a shower of lanyards. Panicking I shouted and tried to loose myself from the mess as they tightened about my throat and I gawked and slobbered like some newb on his first LARP. My attorney lunged forward taking the passes. “This man is a CCG junky under my care . Prepare our suite. We’ll be in the bar.” 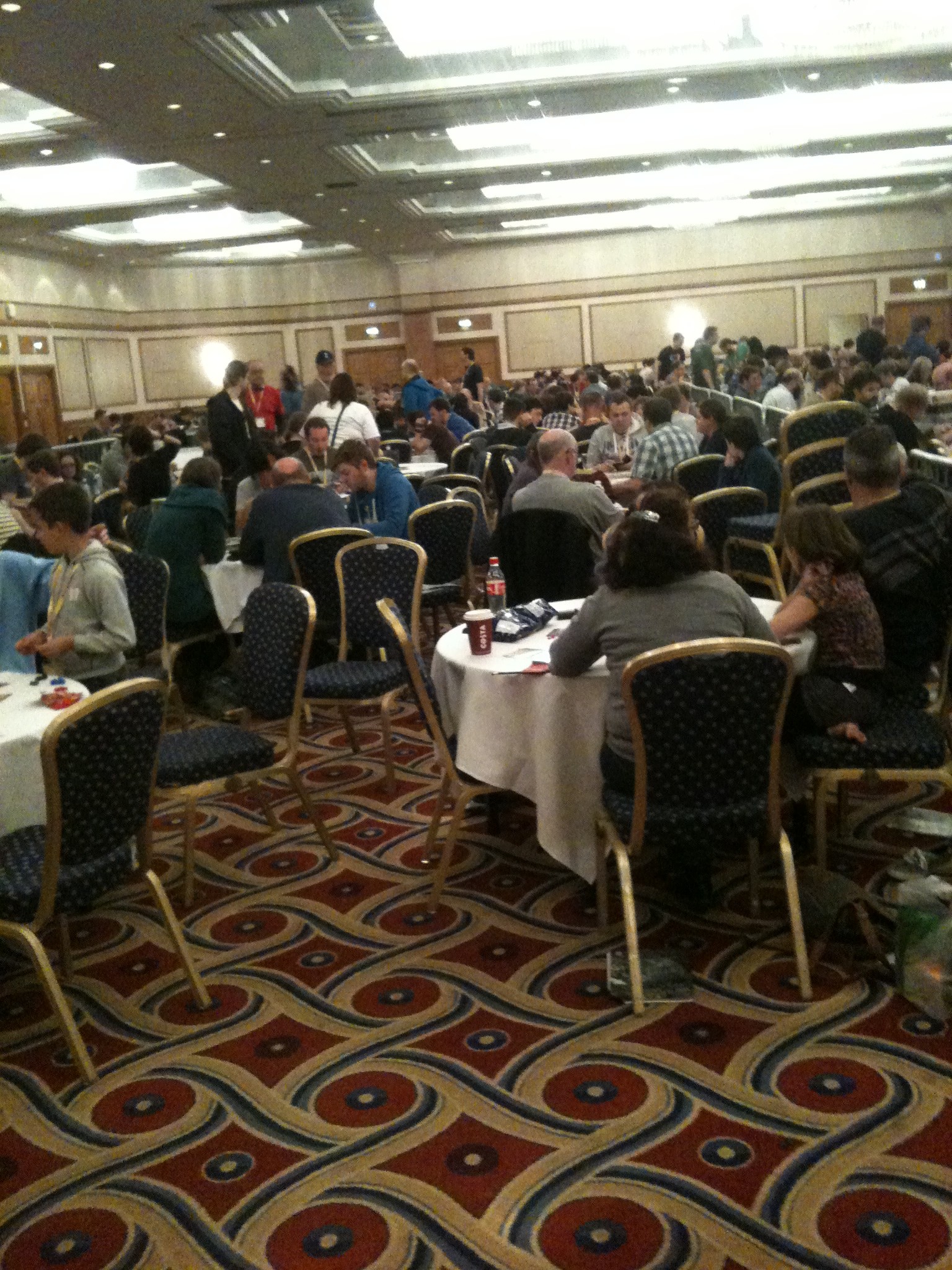 Terrible things were happening all around us. Right next to me a large Barbarian was conversing sweetly with an effeminate pirate, it was like the last days of Rome played out by bit players from a passing B-movie. The carpet was tacky and covered with box tops and rules sheets, we navigated our way carefully-impossible to walk across “Order some stilts,” I whispered “If we damage a component we’re never get out of here alive.” My attorney left me quivering at the bar and I caught the eye of a nearby table of wargamers, each with the myopic stare of years spent hunched over in darkened rooms applying paint to miniatures. I could tell by the way the dirty animals were examining the contours of my skull they wanted it for mixing paint. Cornered like a rat and with no-where to run, i ordered hard liquor from the bar, that rat bastard attorney of mine had fled, leaving me at the hands of these degenerates.

We finally got into the suite around dusk, and my attorney was immediately on the phone to room service-ordering four cheese boards, four buffalo steaks, a quart of red bull and nine fresh grapefruits. “Vitamin C,” he explained. “We’ll need all we can get.”

I agreed by this time the booze had begun to soothe the sugar hallucinations to a more manageable level. Already my attorney had begun to unpack the games, the suite was looking like the gods of gaming had made a component drop of everything ever printed. “What are you doing?” I said “you’ve muddled everything up! God damn savage!” I could feel my grip sliding again, this crazy bastard wasn’t helping. He shook his head “As your attorney, I advise you not to worry about me.”

The TV news was blaring something about a UKIP representative and the fourth Reich, the vibrations in the room were becoming ugly. We had to get out.

Back down in the hotel things had escalated, hoards of lost souls were wandering the endless corridors wired on caffeine and rules overload. spontaneous outbursts of unshackled role-playing was taking place all about us. My attorney was studying a nearby information board. “I advise you that we should go to the bring and buy room and pick up more Euro’s.” What new madness was this, the last thing we needed was to go on a further binge.

Upon arriving at the room it was clear the decision had been ill advised, but the savage fool had been gripped by unquenchable thirst, and i was caught up in his compulsive need to purchase more. The room was narrow and tight, boxes upon boxes of games and books lined the tables, threatening to tilt over and bury us in an avalanche of warped and chewed cardboard. The oxygen levels where low and I clawed at my throat struggling to catch my breath. “God Jesus, its like being trapped in a armpit.” An elderly women was wrestling with my attorney over a shrink-wrapped copy of Zombiecide she had a firm grip and the squeak of his fingers loosening on the box was like the death rattle of a wounded elk.”Let it go you fool.” I said “She has you outmanoeuvred, your in no shape to win.” He had that wild gleam in his eye, the look of a collector cornered like a rabid beast, his body was bristling in preparation of the attack. Sensing the forthcoming carnage I doused him with pepper spray and he retreated howling like a wounded animal.

Dragging him to a nearby water-fountain he splashed water into his bloodshot eyes. “Why would you do that.” he hissed with an air of menace. I backed off ready to defend myself with the can. “You were out of control.” People seemed to be watching us, but the fool wouldn’t move, and i knew what would happen if I grabbed him. 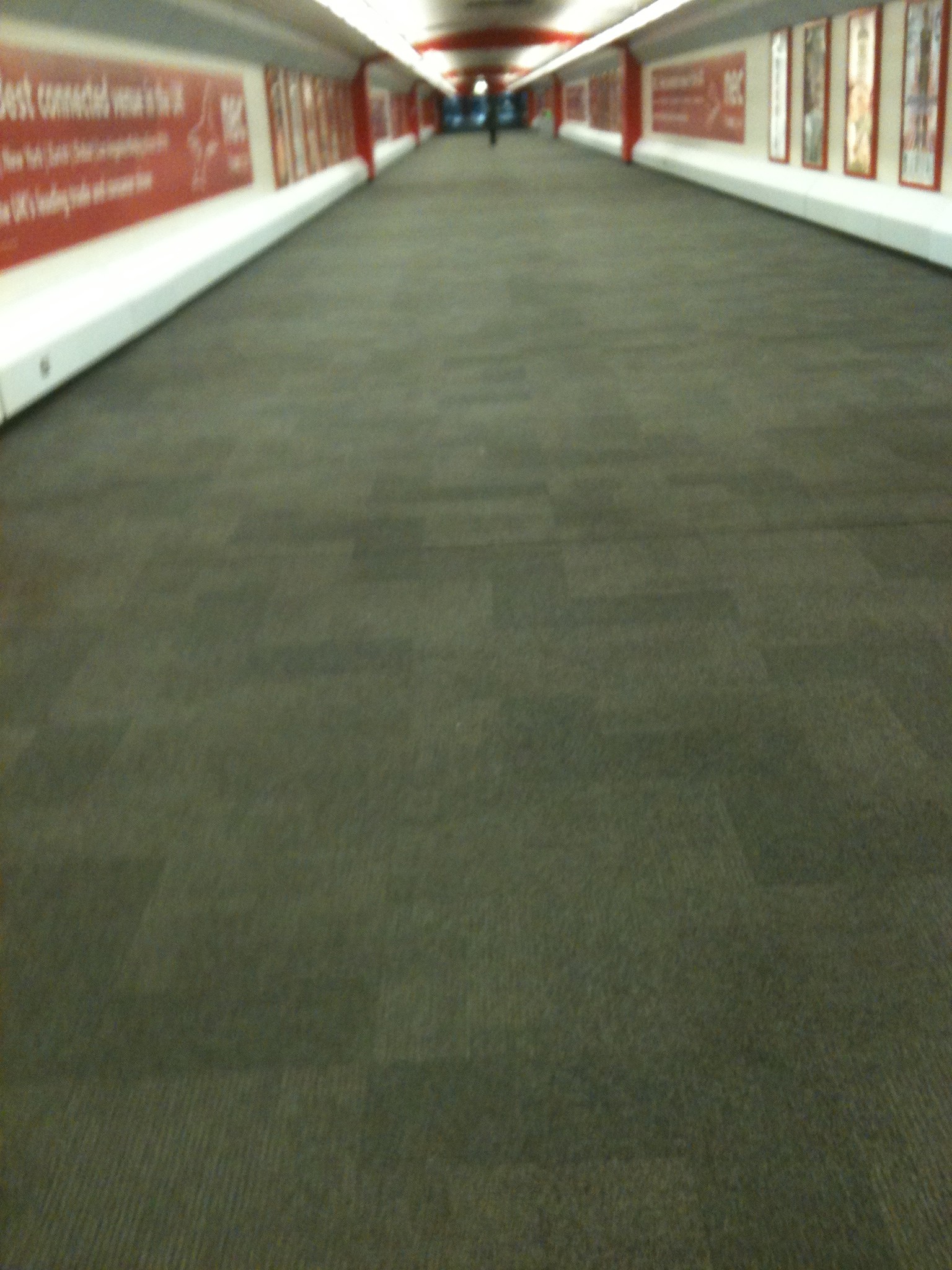 “You stay here and go to jail. I’m leaving.” I started walking fast towards the stairs, ignoring him. This moved him. “Don’t run.” I said “They’d like an excuse to stomp us.” He nodded, finally understanding. We walked fast past the roving hoards, giant men arm in arm with thai brides each with that trapped look of boredom and deep rooted fear. We kept our eyes to the ground and made for the room….

Dominion
Be the first to comment!
Leave a reply »