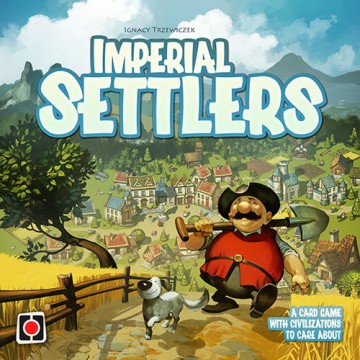 Unique art style and design.
Quick and easy to pick up and teach.
Has a intuitive learning curve.
Solo play available.

There is that possibility of "Dead Man's Draw" but with the variety of options available on each card there is a slim possibility of sinking a game.
Potential unbalanced factions but personally I call shenanigans on this claim.

Another solid release from Portal, a compact and intuitive Civ game that offers a wealth of decisions from the off without burying itself in dense rules. Easy to pick up and teach and most importantly a brisk but hugely rewarding game experience.

My first introduction to Civ games was the granddaddy of em all Sid Meir’s Civilization. And oh my! have I whiled away countless hours chasing that next wonder or shiny new tech, its like historical crack. I’ve circled Fantasy Flights lavish board game adaptation like a seagull over a ham sandwich but I just couldn’t commit, you see the great thing about Civ on the PC is that all the fiddly niggly math is done way off camera leaving you to just enjoy the “gotta collect em all” ride for all the fun and megalomaniac joy that it brings, I just suspect having to do all the hardwork yourself will kind of suck the fun out of being a dictator.

So along comes Ignacy and his jolly little card game Imperial Settlers (and let me be clear I’m developing something of a fanboy crush on this designer having spent many a wonderfully terrible time on a certain cursed island) Imperial Settlers sets out to offer us that Civ game experience we crave but with a compressed play time, streamlined rule set and minimal components, whilst still managing to offer a continents worth of choices.

The first most refreshing thing about this game is the well written but surprisingly light manual, following a jaunty run through its sparse 14 pages you’ll be able to play the game by the time you’ve flicked passed page 12. The game is intuitive and relatively easy to teach to any one with a basic grasp of this style of game and with a modicum of knowledge of modern board games. And in this day of Tolkien sized tomes accompanying boxes filled with more wood than a lumber mill its a nice surprise, and whilst it may be light on instruction it doesn’t skimp on game. 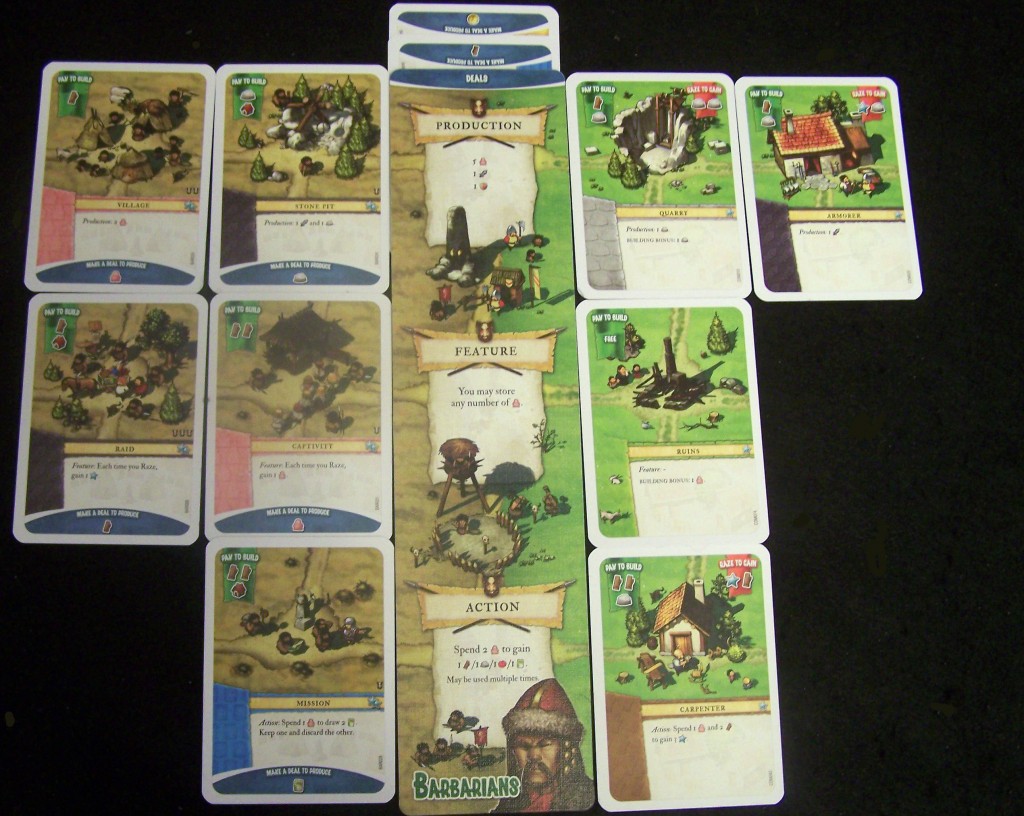 Another attractive feature is the art choice. If you were passing the box on a shelf you might well be predisposed to believe it was a big cuddly cutesy game of simple village life involving farming root vegetables, well you’d be wrong. On the lid there’s this portly looking Belgium chap wandering away from his picturesque little village all smiles his faithful hound scampering beside him, both appear ignorant to the fact that at any moment a hoard of barbarians could descend to raze the town hall, eat his dog and make off with all the women folk, I love it but it may disarm some who go in expecting that carrot gathering game. The art carries over to all areas of the box (literally) and the different faction decks, giving it a character all its own. It kinda reminds me of the early Settlers PC game’s especially as each card depicts a building with your little followers going blissfully about their business, as you build up your empire it becomes this brightly illustrated tableau of village life giving this a retro game feel with a dash of Asterix The Gaul and just a delightful whimsical feel all its own. And here’s another little touch that I really like, the player boards for each of the races is reversible offering either a male or female avatar a feature previously utilized in Robinson Crusoe, its nothing really in the big scheme of things but for me it shows a designer and company not limiting the choices players coming to this game have, no one is alienated.

Played over five turns this see’s you building your own little dynasty from one of the four supplied factions and the great touch is that each of these races has specialized deck compiled of buildings and powers requiring the construction of slightly different engines to thrive. So whereas the Barbarians are all about Razing (Destroying) other players locations and getting generally all a bit fighty. The Japanese are all very Zen and have the option of recruiting workers as Samurai to defend locations and the ability to take other races resources for their own. This gives you a lot of play in this box offering plenty of strategies to explore before your going to get a real handle on proceedings. 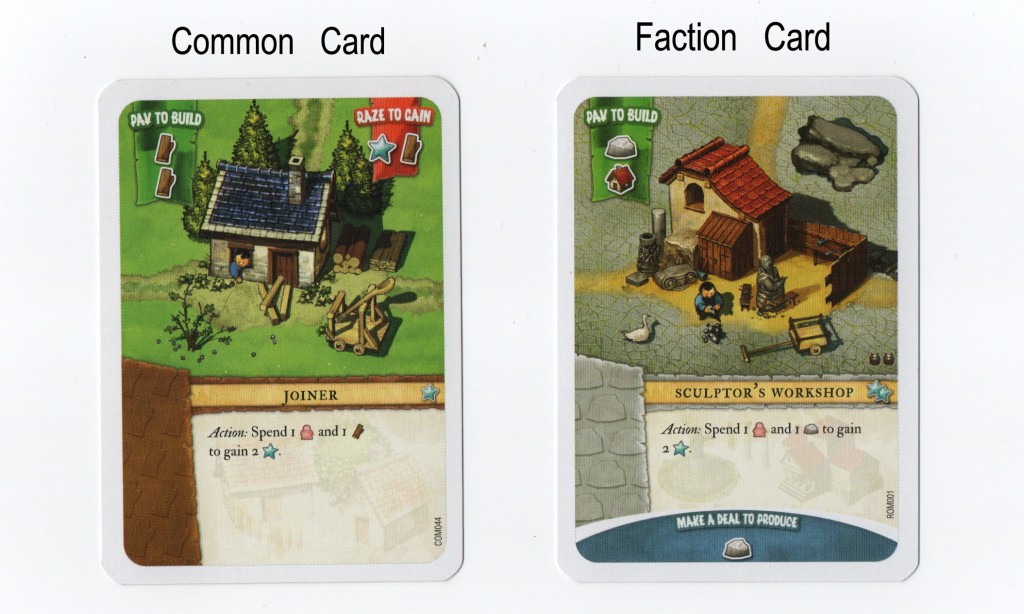 And as we are covering factions and the decks a little more about those, besides the individual factions there is also the common deck that everyone can use and is chock full of generic buildings and powers that can be combined with factions to enhance your engine. The cool thing about these cards is that each can be used multiple ways, so whilst you could just build a card if you have the resources available with the commons there is also the option to raze the card (discard it) and collect the payout, or you can rotate faction cards placing them under your main faction board and “make a deal” where it will produce an effect or resource each following round. Its a great design that offers a wealth of options and means that you always have a choice its for you to decide what is the most efficient way to go.

And that efficiency is the core of the game, because with a few exceptions for each faction or certain special buildings at the end of every round everything that you have produced will be discarded. This requires a deep brain burn of planning and juggling of cards and resources to eke every last drop of game out of each choice, a poor early decision could mean you throwing away valuable resources you acquired because there is nowhere to spend them that turn. And with the game only lasting five rounds that could be enough to lose you the war. This does lend proceedings the feeling of each player engrossed in a complex game of solitaire but this experience is enthralling heck! its the game. Nothing gives a greater sense of accomplishment than managing to chain together a series of actions resulting in no wastage allowing you to sit proudly back and smile at the player across the table with a pile of resources and that desperate look in their eye. The game does allow for every faction to attack an opponent and destroy common buildings gaining resources so there is some interaction, and it means you always do need to have one eye on the other players, and it may be time to get nervous if those filthy Barbarians are stockpiling Raze Tokens. If you find all of this a it too much or your just predisposed to flag waving and tree hugging then the rule book contains a peaceful variant limiting all this nasty attacking business. Pansy.

And really is the meat of the game. Every round is broken down into four main phases.

Lookout – this is where players acquire three new cards one from their specific Faction deck and two from the common cards.

Production – Players receive resources from the their specific Faction board and then from any Production buildings or Deals in play.

Action – Where everything happens. Cards are used to build Production locations, Features locations (these give either multipliers or other abilities usually tied to taking actions), Action locations where you will use a worker or good on that card to receive a ability or bonus. This is done in turn order with each player taking one action and play passing round the table until everyone has passed.

Cleanup – Everything is cleared away and then rinse and repeat.

Once the fifth round is over Victory Points are added up, gaining extra for Faction locations and any other multipliers and whoever has the most wins. 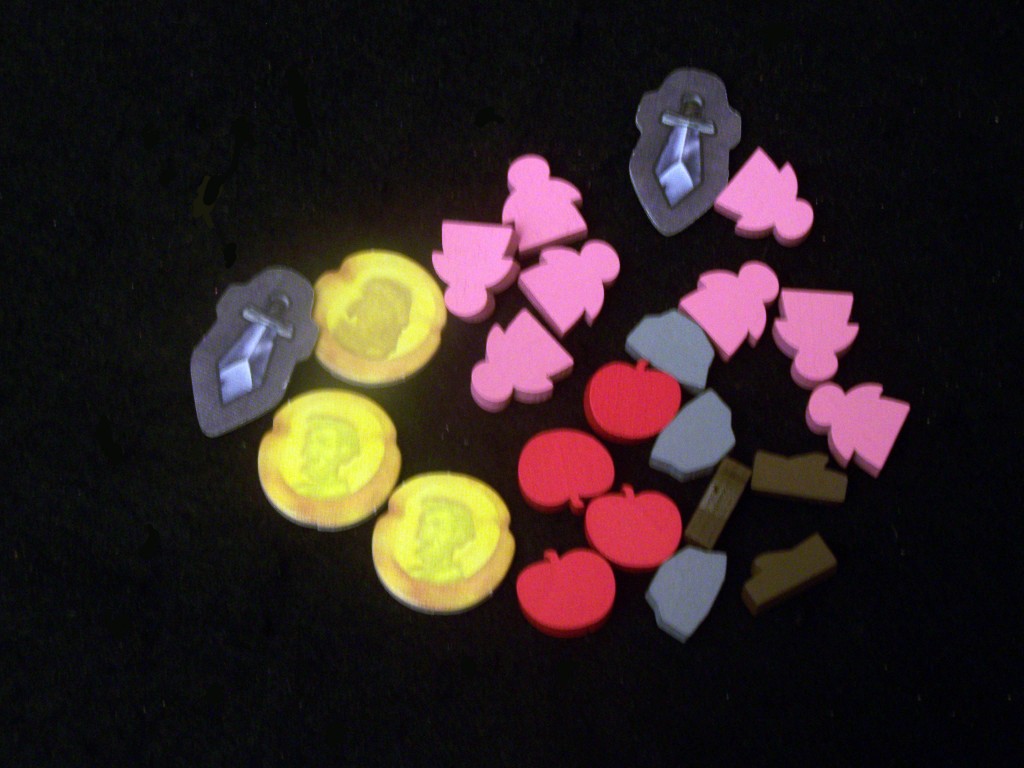 So who is this for? Well if your looking for that Civ game experience without a telephone directory sized rule book and a brisk playing time then this does the job admirably, I love that each of the factions have distinct strategies and a feel all their own, adore the clever design of the cards and all the neat looking wooden components. Its true that  the randomness of the card draw could be problematic if you do draw a dead hand in the early rounds, but personally with all the options available to you there is always something to do. The learning curve has a gentle amble to it that escalates with each subsequent round and there’s this beautiful moment where you see the light switches clicking on reflected in everyone’s faces as they suddenly get it, I mean really get if I do this and then spend that and then do this I can get the thing I wanted here etc etc. It scales great and plays just as well with two or four and if you are a solo player then this also includes rules for you, its a solid little variation that captures the essence of the main game and is being supported in the forthcoming expansions.

For me this was one of the highlights of 2014 its a snare drum tight little game my only lament is I don’t get to play it nearly enough as my home groups is usually five players, hopefully the promised extra factions will appear in the coming year and allow for expanded player numbers, for the time being I guess I better convince my better half to play more. There is already one expansion available “Why can’t we be friends” that includes more cards for the decks and opens up the possibility to deck build your factions. As more of these sets become available then another avenue of strategy will be there, personally I just like the game for what its is and i’m not convinced I want to bury its sleek design below the requirement of having to build decks before I can play, but I certainly welcome more cards to the sets even if I just mix them all in.

I personally don’t own anything else like this, it has a dash of deck building two shots of civilization and a shake of engine builder resulting in a heady cocktail of all the great things from bigger longer games distilled into a satisfying hit of fun with just enough thinky to result in a gratifying game that won’t outstay its welcome.